Finally, down to my last ten games from this set of articles. It is almost unfair to only list thirty (okay, due to the honorable mention post, thirty-five) games when so many more were thoroughly enjoyed by me. Sure, there were plenty of stinkers in there too, but more often than not – I enjoyed the games. This was the longest such list I have tried on this blog to date, but it was a lot of fun to put together. 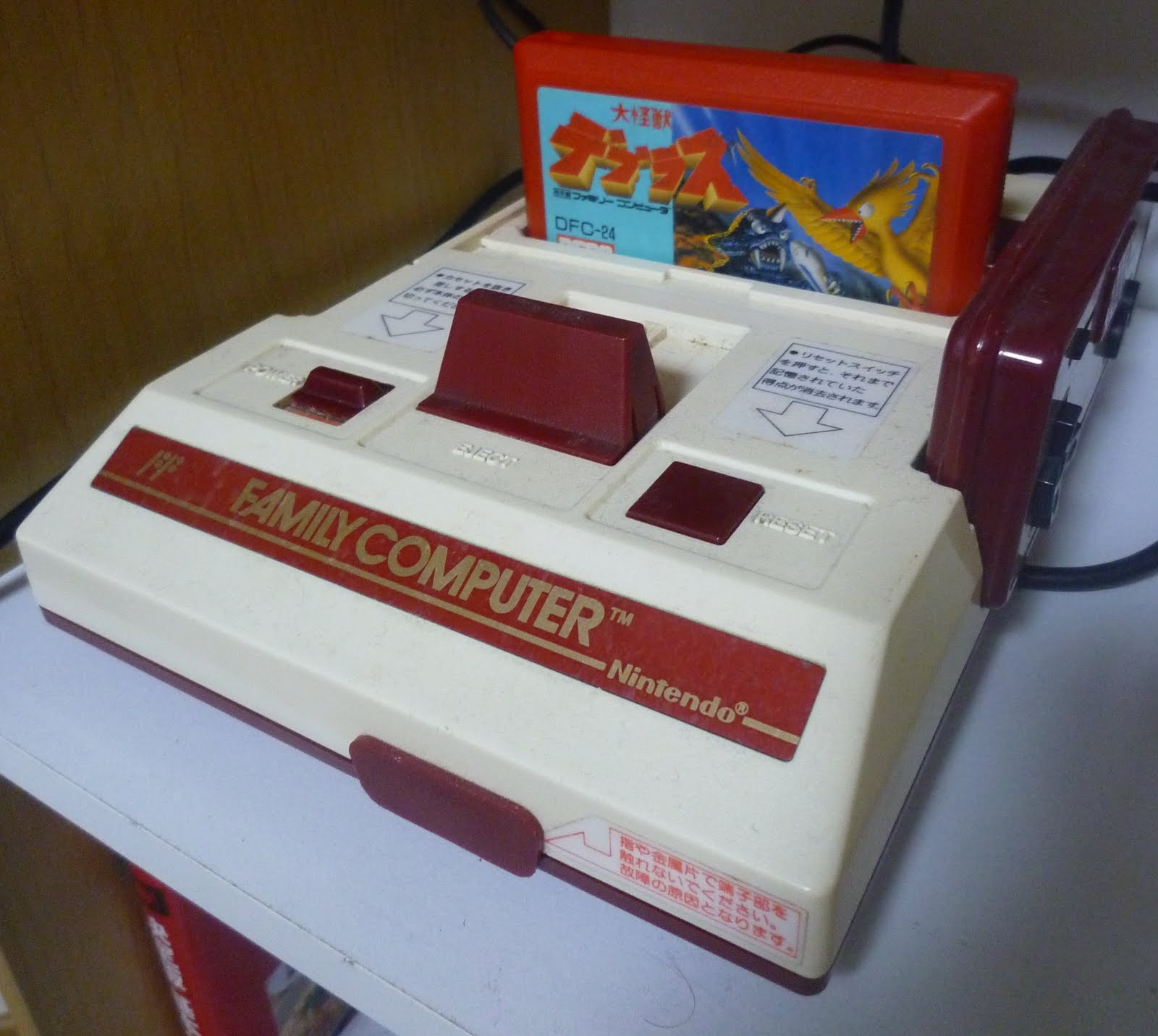 Elevator Action and Dragon Power were my first two NES games (aside from that Super Mario Bros. and Duck Hunt cartridge), and they were both pretty lousy in retrospect. Others like Double Dribble, a Christmas present from my grandparents, was an absolute hit with me. My dad would on Fridays after work buy a couple of pizzas and take my sister and me to the video store. She would inevitably rent some sort of cartoon, I would rent a game. I got a lot of games in that way.

Here are my final ten games.

The mash-up of gameplay really worked for me here. For starters, I thoroughly enjoyed beat ’em up games, such as Double Dragon and even Bad Dudes, so River City Ransom had that going for it. The fighting style was pretty close to that of Double Dragon, a favorite game of mine, but they sprinkled in a somewhat open world with role-playing elements like money used for upgrades. The visuals reminded me of Super Dodge Ball – but with less flickering. Naturally, as a huge fan of Double Dragon, I was pretty excited when the Double Dragon theme music played near the end and two characters who were meant to look like Billy & Jimmy (but were called Andy and Randy) come rolling out. 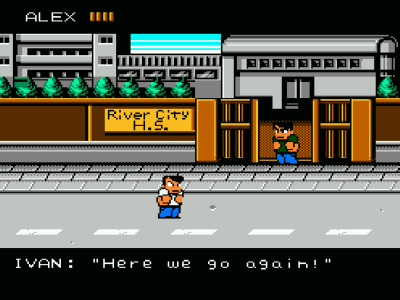 Also known as Super Contra, this game was the sequel to the very popular Contra by Konami. I know most people preferred the original, but I kept going back to Super C when I had a chance. The visuals really did not feel like much of an improvement, but I disliked the vertically scrolling even-numbered levels of the first Contra, and Super C is strictly a side-scroller – giving me more of the good stuff. The last level, with the various alien eggs and boss were also a more satisfying, creepy ending to the game than the original. I had two buddies who would almost always come over and fire this up with me. 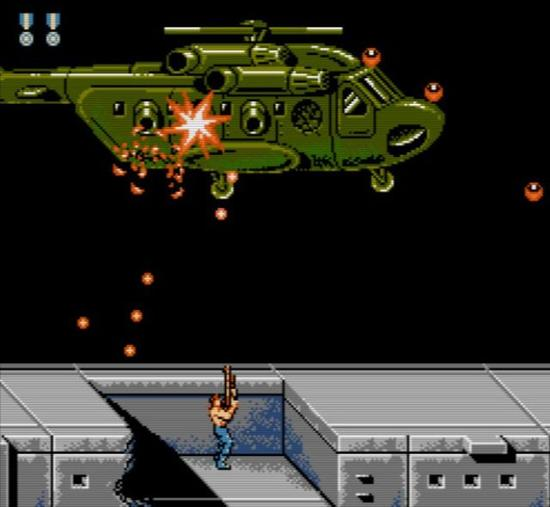 The first Ninja Gaiden earned a well-deserved reputation for being very hard. In fact, I beat the sequel before the original. However, the first game did a lot of things right – the action was intense, the cutscenes provided an entertaining story while the graphics and music were excellent. The thing is, Ninja Gaiden II did all of these things better in my mind, all without the insanity-causing difficulty of the first. That is not to say that the sequel was a walk in the park, but I certainly enjoyed it more and beat it quite a few times as I soaked in the cinematics. 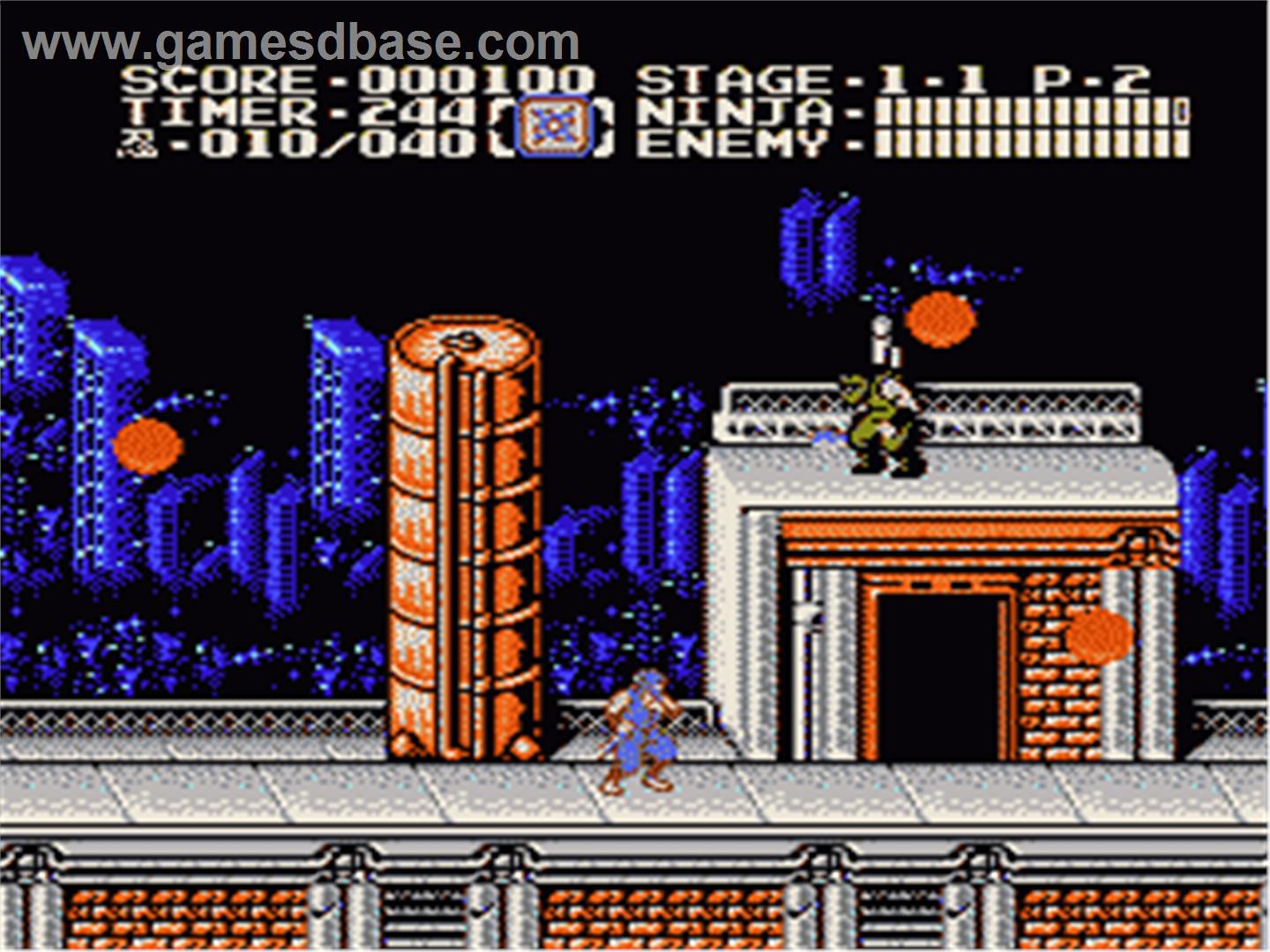 Earlier this week, I talked about Super Mario Bros 2 being the black sheep in that family, and apparently I like an underdog because I thought Zelda II was a lot of fun. Does it feel different than any other Legend of Zelda game? Sure. Was it perfect? No – it had more of an action feel  with things like perilous jumps over pits and more reflex-oriented combat (the final battle with your shadow-self was especially trying for some people). However, in some ways, this was more of an RPG than the other Zelda games, by introduction experience points. This was also one of the first games I can recall with a New Game+ where your stats/levels carry over from the first time through. I played through this one multiple times, and never got sick of it. 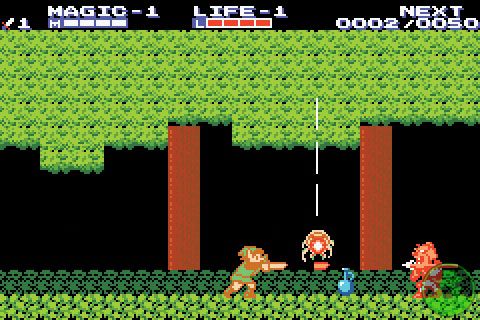 Now we are getting into some seriously replay territory. Most of the games on this list I beat a handful of times, maybe a dozen. Now? We’re talking much bigger numbers, especially for this game. I would guess that Double Dragon II was one of my two most beaten video games ever. It had two players, and while the combat was completely changed around from the original (both arcade and NES), it felt good. Kicks, punches and throws had a certain kind of heft to them and the graphics were bright and detailed for the time. Some of the music was quite catchy – but the last two fights in particular were standouts for me. Fighting shadow versions of yourself was trippy, but the final boss was also very cool and could only be accessed by beating the game on its hardest difficulty setting. 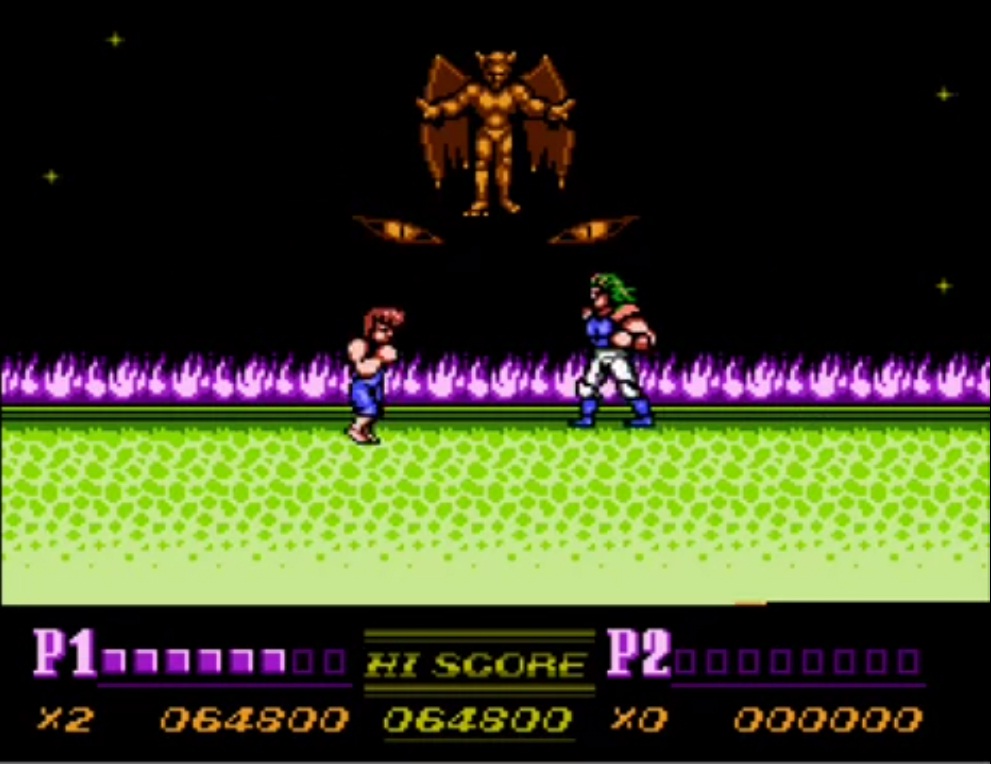 Along with Double Dragon II, this is probably among the titles I played through most often. I had some serious speed run times down for this game back before people were watching crazy speed runs on the internet. Along with Bionic Command, this was probably my favorite Capcom game for Nintendo. The graphics were fun and bright, the music was awesome and while platforming was never my favorite genre, there was plenty of other action to keep me from minding as I hunted down robot bosses over and over again. Getting the powers from different robots encouraged a lot of experimentation and I appreciated the non-linear approach. 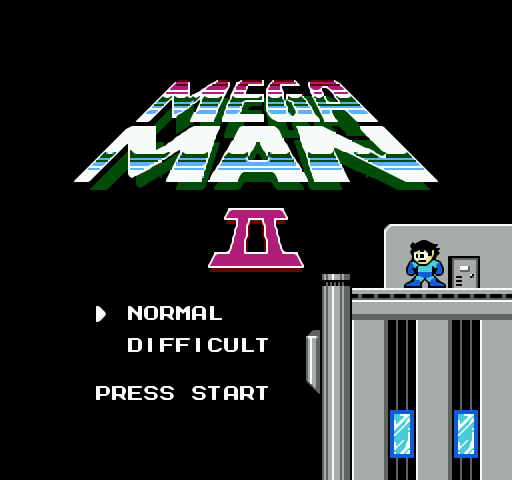 I enjoyed Tecmo Bowl well enough, but it was Tecmo Super Bowl that had me absolutely hooked. The gameplay in retrospect was ridiculously simple (zigzagging runners and 100 yard TD passes come to mind), but the player ratings and season stats had me actually caring about statistics. Barry Sanders was a blast to use, because… well, he was Barry Sanders and he was amazingly fast! More than that though, this game is what got me into the NFL, not the other way around. Considering what a huge fan I am of NFL football now, I can trace that back all the way to this title. This was also once the subject of a Retro Reflection. 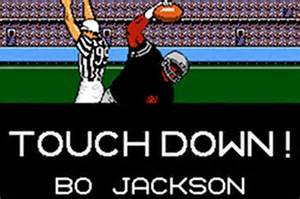 Considering how many Final Fantasy games I have played over the years, it is hard to believe I almost never got a chance to play this one. For whatever reason at the time this came out, I was pretty broke. A friend had picked it up however, but did not like it very much but knew I had been interested in it. He proposed that I trade him my Metroid for it. Sold! Best trade ever. I loved Metroid, but had already beaten it several times over given the difference in when the games were released. After having played Dragon Warrior and Ultima: Exodus, I knew I enjoyed these turn-based RPGs and eager played, and replayed, and once again played, and played some more… Final Fantasy. The world seemed huge, and there were always things to explore. Dungeon design and RPGs in general have come a long ways since then, but this game fascinated me like few others. 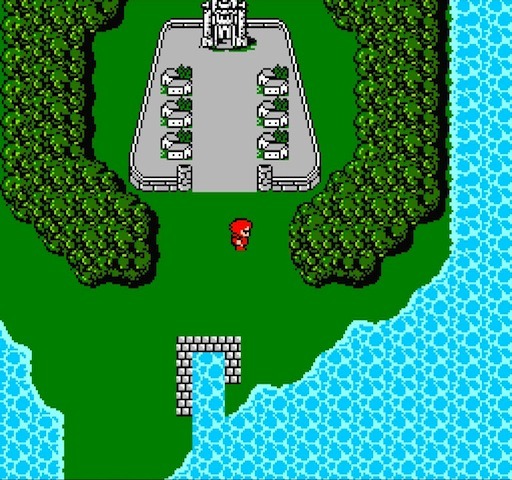 This is the title that tops almost everyone’s list, and it is near the top of mine. This is probably the third time now in this list I have mentioned that platforming titles are not my favorite, but Super Mario Bros. 3 was a great deal more than that. It was about imagination and exploration. You could take turns playing it with a friend, or even get a bit competitive with that friend and do the versus stages or try to snag the power-ups on the map. The worlds were fascinating (the giant-sized one was my favorite, hands-down), with all kinds of cool little tricks and power-ups (warp whistles and unique suits). The marketing campaign behind this game was huge – I had never seen anything like it for a video game when I was that age. Now video games are big money and you see games like Call of Duty or Assassin’s Creed getting commercials and trailers and lots of marketing hype – but back then? Not so much. Mario met and exceeded the hype though, delivering a huge gaming experience with amazing graphics and memorable music that felt way ahead of its time. 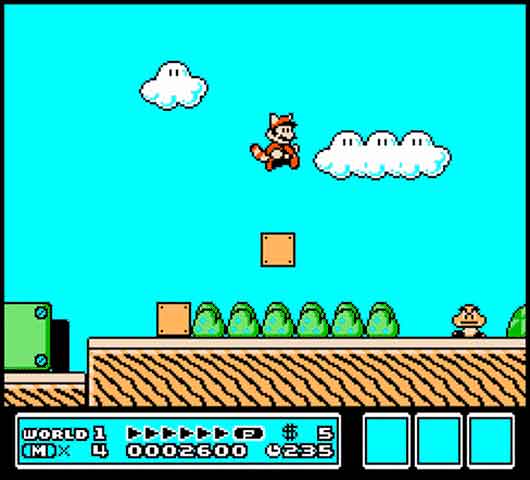 Super Mario Bros. 3 was a technical marvel at the time, and had perhaps the broadest appeal of any video game ever to date, but something about The Legend of Zelda just resonated with me from the very beginning. Combat required that you have some reflexes about you, but it was often a lot more about strategy and puzzle-solving to navigate dungeons and tough monsters. The game implored you to use your mind and experiment, treating you to a variety of different locales, whether it be figuring out the pattern to continue through the mountains, braving a deadly cemetery or traversing a forest fill with creatures. Each time you defeated a dungeon, there was a unique sense of accomplishment. As for beating the game? Well, that was accomplishment and then some, because it was the first title I recall playing that had a totally new challenge for you once you beat the game. A lot of games, like Super Mario Bros., would change things up by adding some extra beetles on the next play through – but The Legend of Zelda provided you with all new dungeons to explore. The music while wandering Hyrule was among the catchiest of its day, and has been done and redone many times over the years by and for fans who themselves got lost on Link’s initial adventure. This was the game that made me realize that video games had not just improved since the prior generation of Atari, but evolved into something completely new, promising a depth and adventures I had never seen before outside of books or movies.

I hope you enjoyed this list – I had a lot of fun compiling it. I would love to hear any thoughts you might have about the games I listed here – agree, disagree, or feel free to call out your favorites I might have missed! Thanks for reading and have a great weekend!