I played a little bit of everything, thanks to the NES. Before becoming introduced to Nintendo’s console, I had been playing Arcade and TI99/4a titles. These usually consisted of basic action or platforming, like Much-man, Parsec, Space Invaders, Pole Position and more. 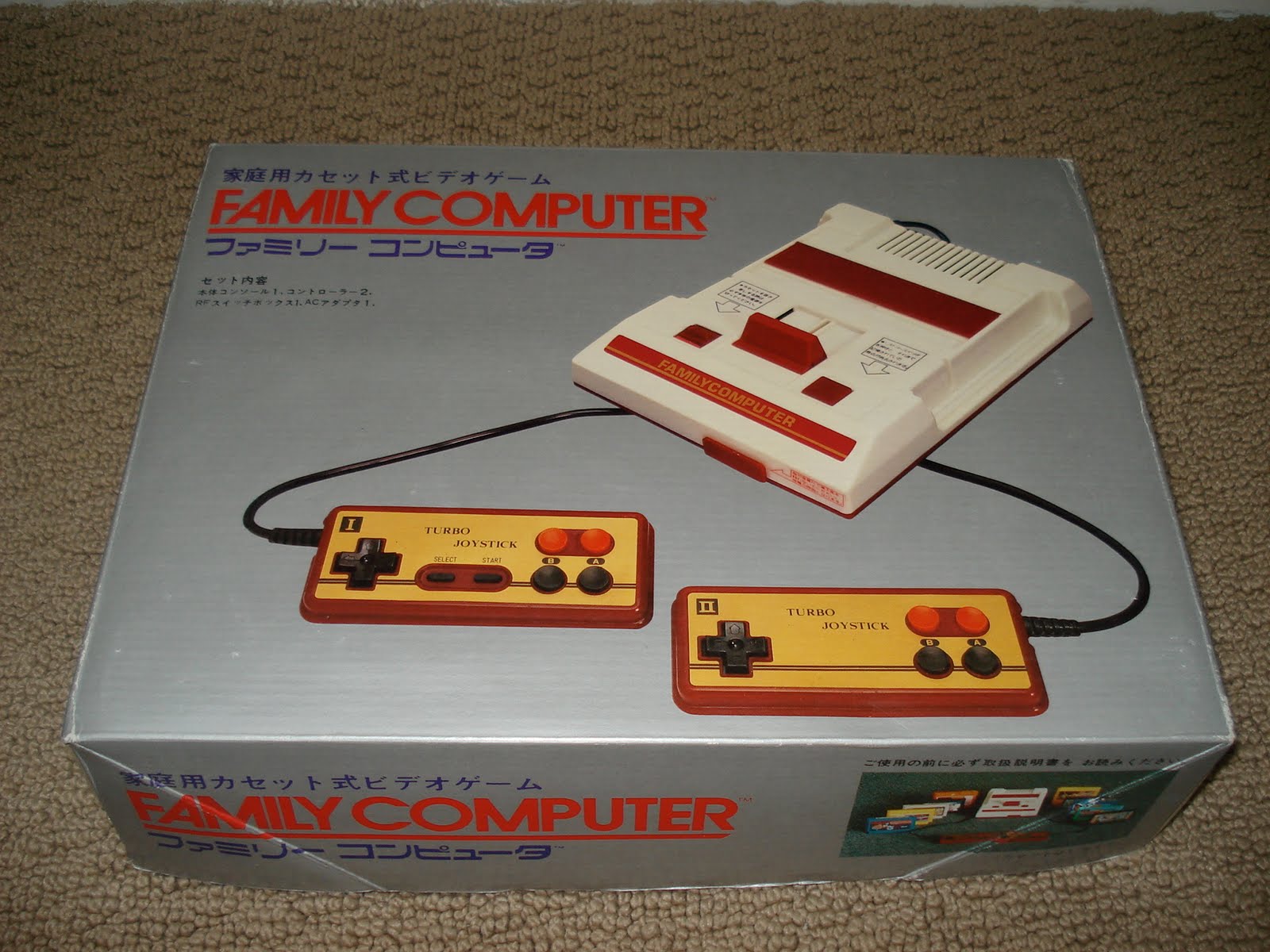 However, the Famicom (a mash-up of Family Computer) allowed games to possess a greater amount of depth. Certainly action, sports and platforming had a place, but so did new experiences like strategy, RPG and lengthy adventure titles. Of course, I much preferred the battery backups to the lengthy, often annoying password systems, and both were prone to error. Passwords were often easy to mess up, and battery packs could fail to save (or go bad over time). Still, the games were built with a different endgame in mind than arcade titles, which were meant to hook you – but to take your quarters as well.

Konami was well-known for their plethora of shooting and action titles, with classic names such as Contra, Gradius, Jackal, Life Force and more. They also earned a good reputation with some of their more popular adventure games, like Castlevania and Metal Gear. Blades of Steel was an attempt at doing something different, and it generally succeeded. Originally an arcade game first, the action of Blades of Steel, combined with its excellent graphics impressed fans with a game that felt deeper than Nintendo’s own Ice Hockey offering from a couple of years prior. The fighting was a popular mechanic that could lead to penalty shots, which I personally found quite exciting. There were also a handful of voice samplings, somewhat unusual for the NES at the time. 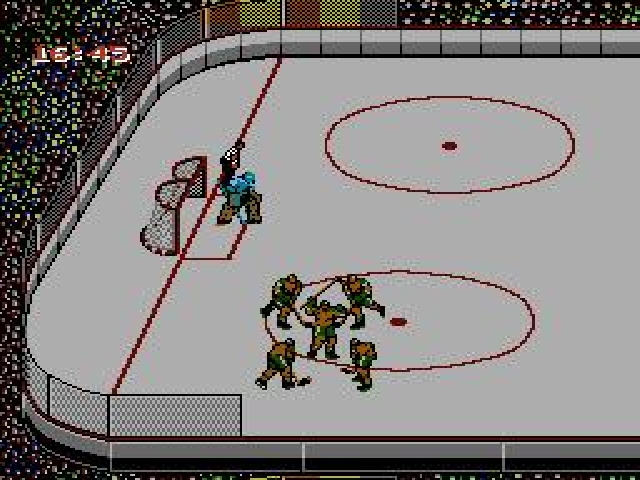 This title was considered among the hardest Nintendo games when it first released. The majority of the game plays out as an action platforming title, with an emphasis on vertical movement. There are some modest RPG elements as well, with boosts available to Pit at certain points in the game. The last level abandons almost all of these elements as Pit adorns the magical items he has gathered in the prior levels, playing out like a side-scrolling shooter. The music from a Reaper sees you? That is still ingrained into my memory. 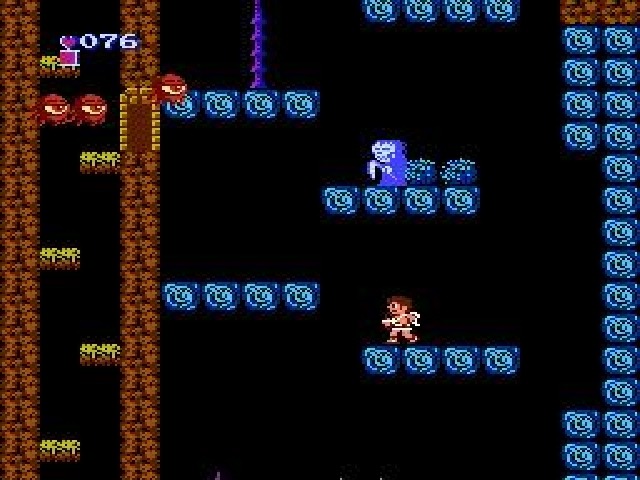 Probably my favorite spaceship shooter of the early Nintendo era. Konami once again proved that they knew their way around shooters as anybody. Similar to Contra, Life Force alternates perspectives every other level (odd numbered levels seeing you flying horizontally from left to right, while even numbered sees your flying upward vertically). Another game that made famous use of the Konami Code, it was a title that could prove quite a challenge without it. Navigating all of the bullets and obstacles – while memorizing what order things happen in – were paramount to survival. There were power-ups you could acquire, such as missiles, lasers and a force field – all very useful for some pretty large boss fights at the end of each level. 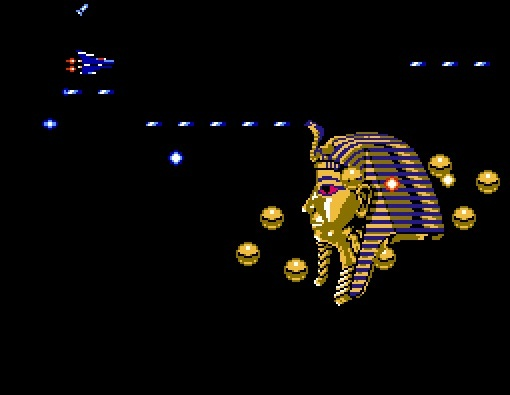 I have talked about Bionic Commando in the past on here, as it was the subject of one of my Retro Reflections some time ago. If you are incredibly curious about the title, I encourage you to click on the link above and spare you too much reading right here. Simply put, Capcom made arguably the most creative platforming title ever all those years ago. Not every aspect of the game was perfect (I really did not care for the overhead scenes), but it got a good deal more right than wrong. 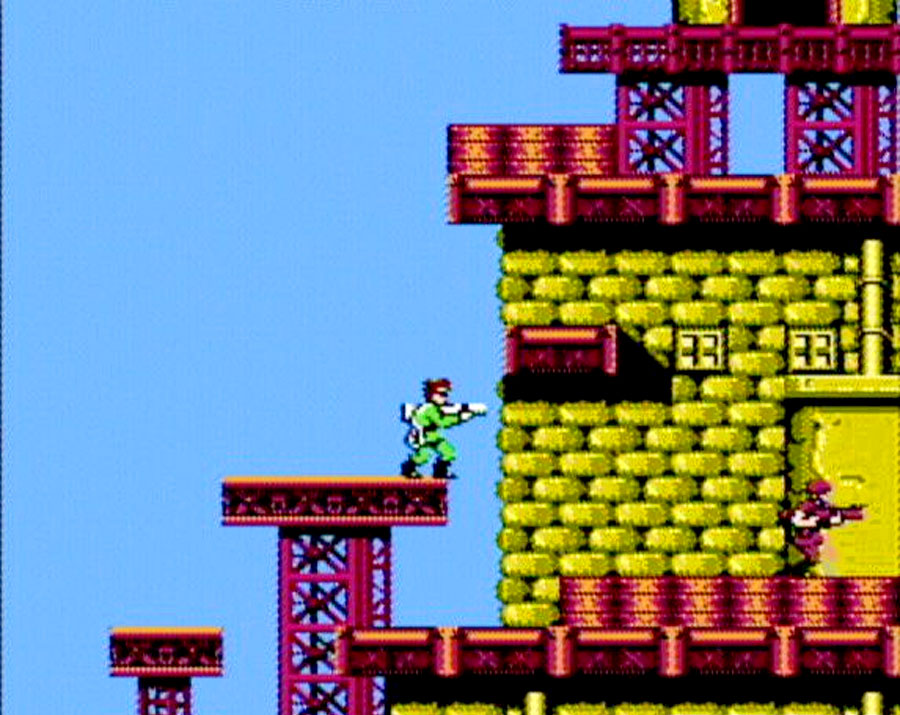 This game was all about pure fun, especially with friends. The premise is pretty simple – characters on each team have hit points, and you try to strike them with the dodge ball. You can sometimes catch the ball if your timing is good, and certain characters have super-throws they can pull off if they meet specific conditions (like running up to the line and releasing at just the right time, or getting a running and jumping start and firing it off at the apex of your leap). There is a ton of visual flicker here, which is a shame because the character models look good and the entire game is colorful. Better yet, versus modes really allows you to take some pent up aggression on your friends. 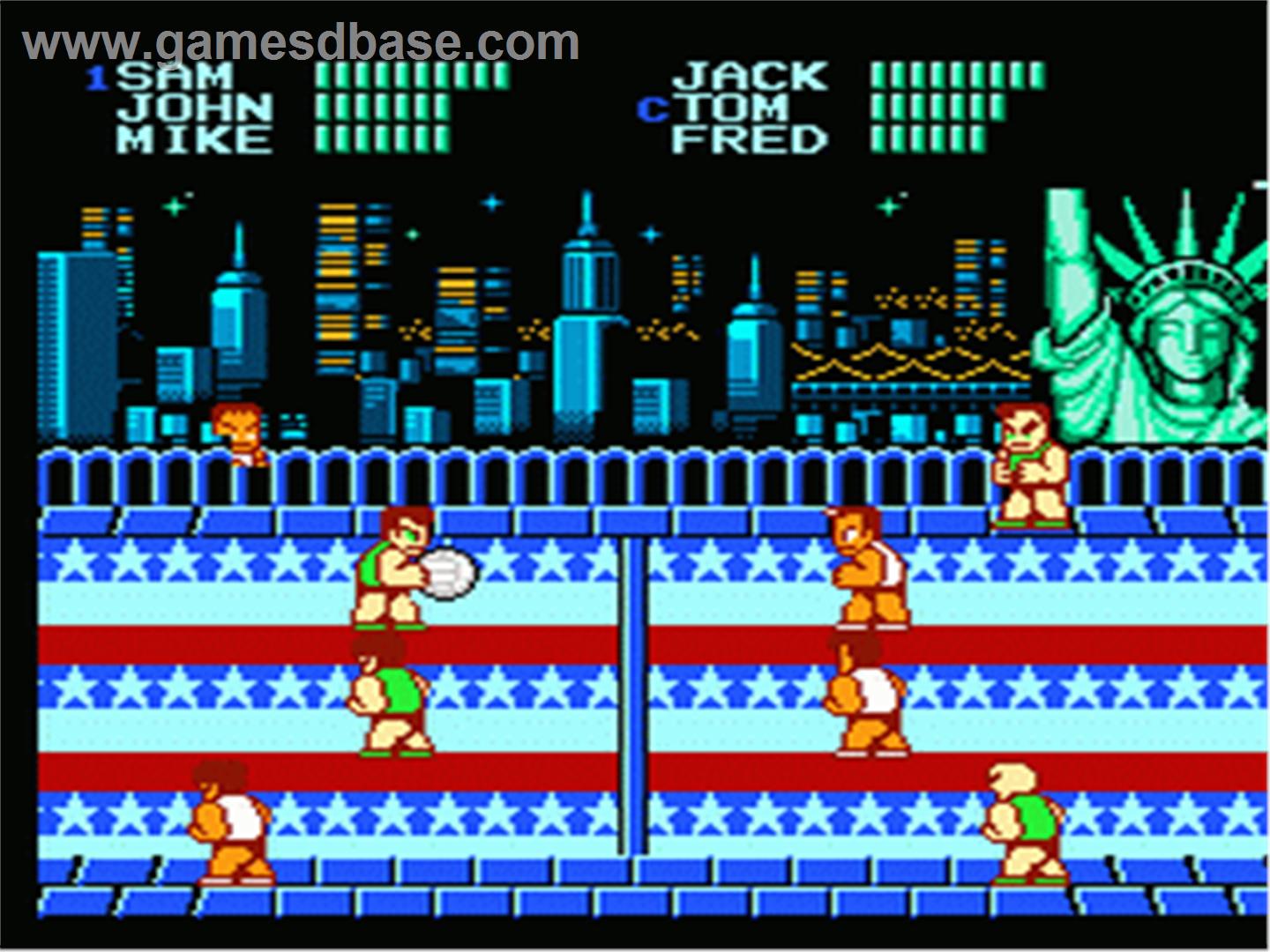 Nobunaga’s Ambition was my introduction to the Koei strategy games, and Romance of the Three Kingdoms became their most popular strategy series, but Bandit Kings of Ancient China was easily the one that became the favorite of mine and most of my friends. Much like Nobunaga’s Ambition, success is about balancing the good of your people against the strength of your military. Much more prominent RPG aspects than Koei games prior, Bandit Kings had characters with much more notable personalities to become invested in. Combat was also a good deal more detailed, and the introduction of magic to the hexagonal grids added a layer of strategy to the ranged and melee combat. All of this is set against a the Song Dynasty and you have until January of 1127 to defeat Gao’s army. 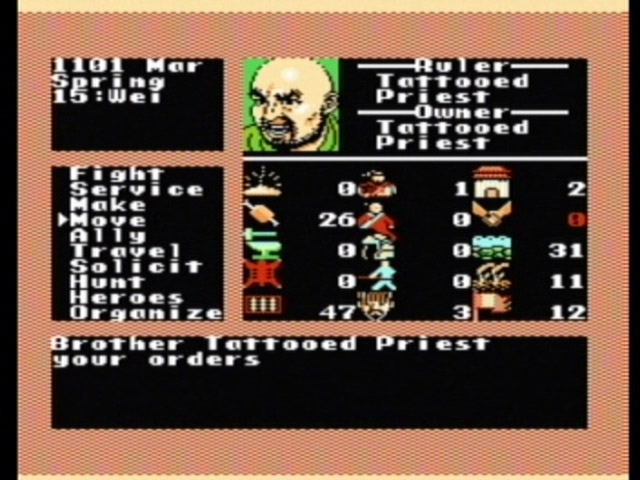 Ultima: Exodus was my first brush with a console RPG – Dragon Warrior was my second. Called Dragon Quest in Japan, this is about as traditional an RPG as you can imagine. You start off fighting slimes. You wind up with improving spells and armor as you grind out experience to gain new levels, with combat playing out over turn-based combat. You are trying to save the princess. The Dragonlord must be defeated. I maxed everything out. I saw both of the choices at the end (you can fight the Dragonlord, or you can choose to side with him – and was stunned when the game was ‘frozen’ and my all of my character files deleted upon resetting the game). 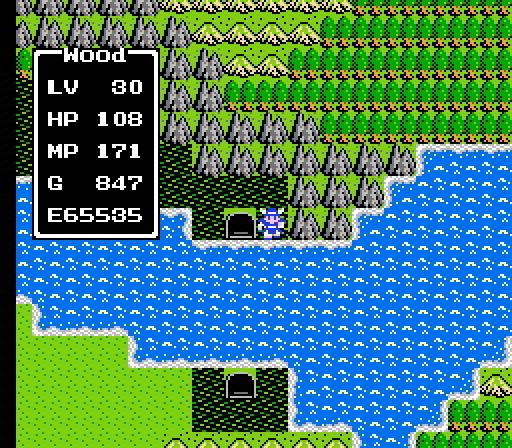 Simply put, I loved this game when it came out. At first, it sort or seemed similar to Kid Icarus in that there was platforming and shooting – largely against a spartan black background. Metroid however proved to be a much deeper game, with plenty of action but also the need to solve puzzles. These were not the push this block or burn this bush puzzles of Zelda, but figuring out that you needed an ice ray to freeze the creatures so you could use them to navigate the screen vertically… kind of puzzles. The music was amazing, and the sense of isolation I felt while wandering about was impressive. 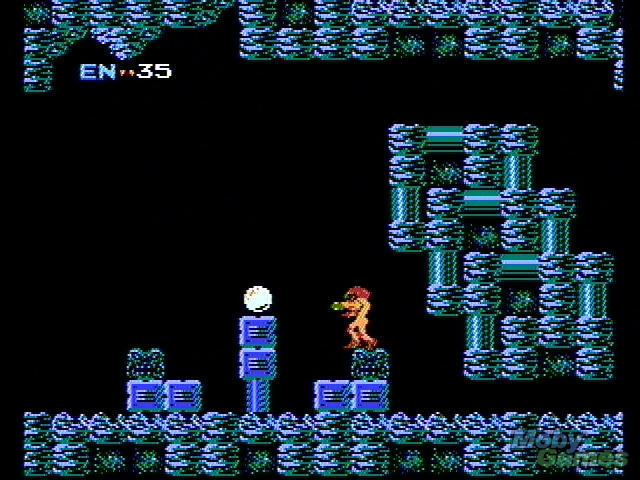 Right about the time I got my NES, Double Dragon was taking arcades by storm. Easily my favorite arcade game, I was beyond excited when I saw that Double Dragon was coming to the Nintendo. At first, it was a jarring experience as the console version was a very different animal from the arcade one. Instead of starting with all of your moves from the beginning, the NES version had you earning experience. As you increased your experience, you could perform more powerful moves. The other notable differences came from the hardware limitations – only one player could play at a time (whereas the arcade game touted the two player mode heavily) and there could only be two enemies on the screen at a time. On top of that, the level designs are very different, but not designed as a way to suck up your quarters the way the arcade version was. There were plenty of limitations and glitches, but I still spent a ton of time rescuing Marian. 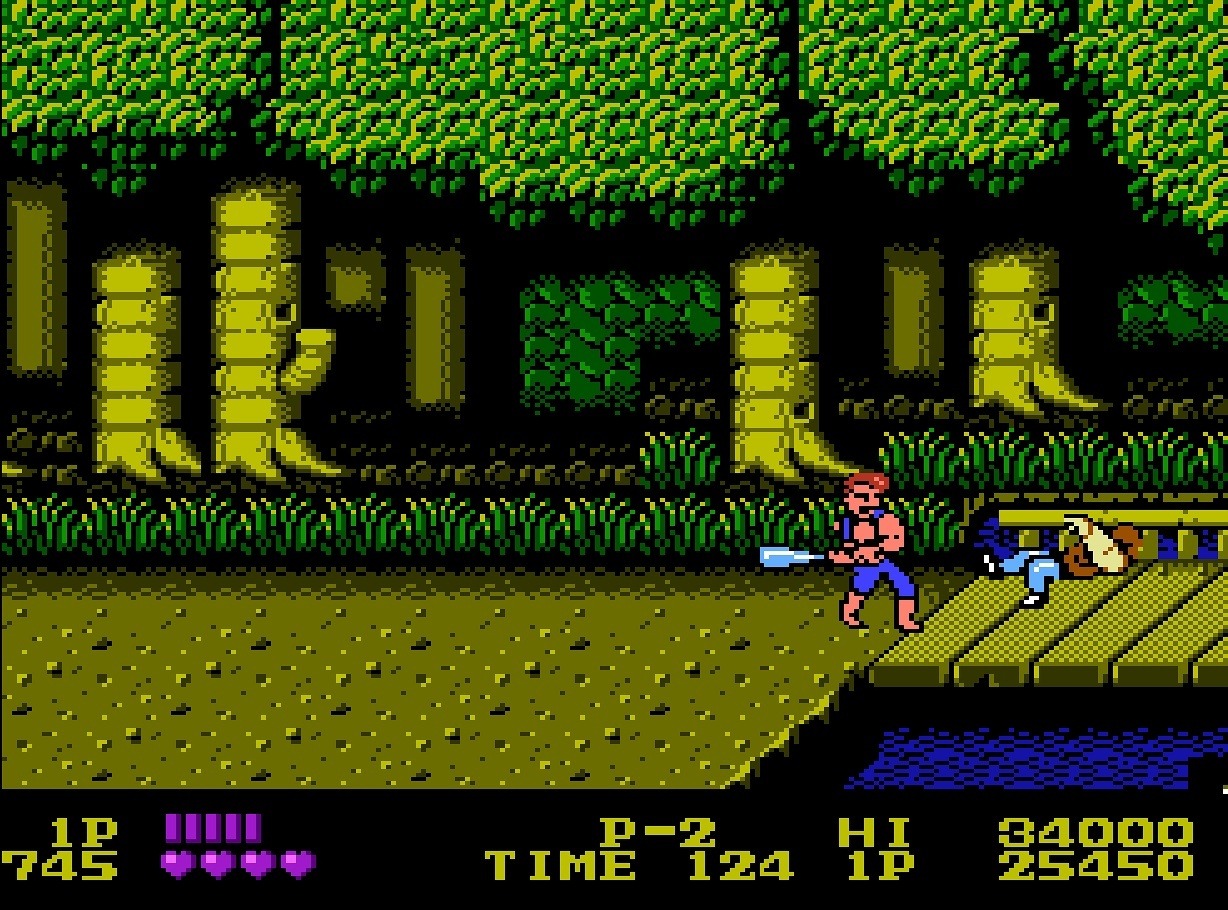 If ever there was a game that was probably going to get people upset at this list, this is it. But since this is my list and not yours? Too bad – because Simon’s Quest was a Nintendo staple for me. Famously ridiculed by the Angry Video Game Nerd years ago, almost everyone would probably put Metroid higher on their list than this title. In retrospect, Simon’s Quest had plenty of design flaws that might have made it painfully unpleasant to play back then – but I was one of those kids who had the gruesome Nintendo Power with Simon holding Dracula’s decapitated head, which meant I had all of the maps and hints and had no trouble advancing beyond my own reflexes. This is the first game that I recall having a system of night and day, and also providing you with different endings depending on how quickly you beat it. The Grim Reaper looked menacing. You were using a bone as a shield. The music was awesome and the nighttime was a scary thing. I must have beaten this game a dozen times. 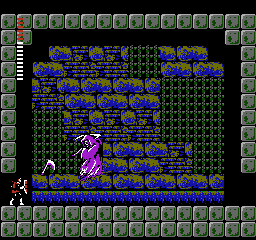