First off – Happy almost-Halloween! Bit late for a background update to match the season, but I went ahead and made a quick one. Now, onto the main event:

The Guided Fate Paradox is a title I caught a trailer of in passing a few months ago, and I have been looking forward to it since. I cannot put my finger on just what it was about the game that caught my eye back then, and even asking most of my friends about it, most have not heard much about it aside from what I have been telling them. Their loss – but I will encourage the JRPG fans among them to give this one a go as soon as it releases on PlayStation Network on November 5th. 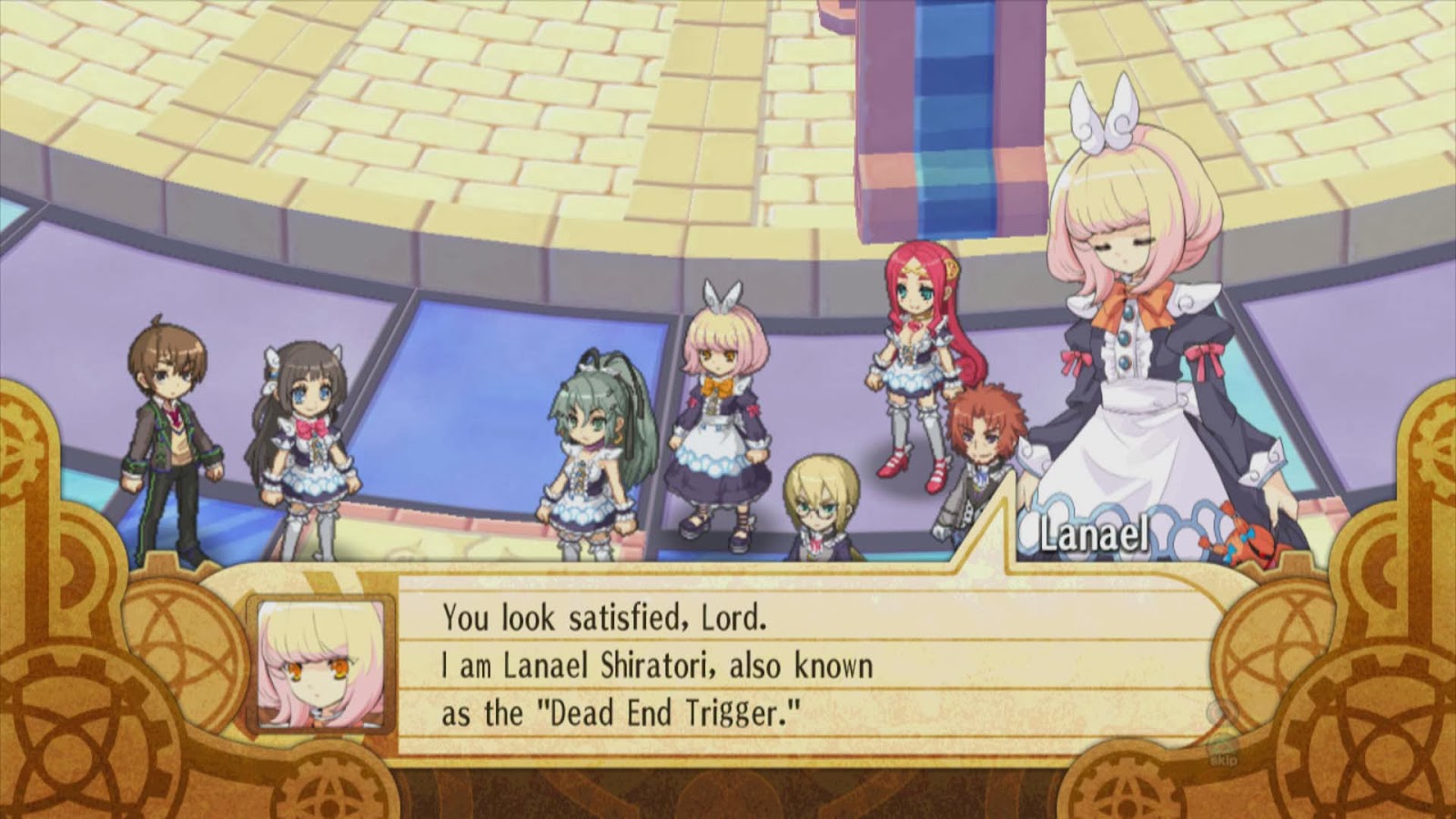 The storyline is equal parts insane and hilarious as you play the part of a high school student (named Renya) who views himself as the least lucky person in the world – finally winning the lottery at his nearby mall. Of course, this is a very different kind of lottery. He did not win a car, a million bucks or even a stuffed Prinny penguin doll. No, he won the lottery to have a chance at becoming God.

Yup, apparently winning that gig is based completely on chance. Or is it? That is explored a bit further as the game goes on and the story that starts out rather simply becomes a much more involved tale. When things begin, your new found God is told that it is his job to answer prayers for people, combating creatures along the way that seek to keep him from fulfilling those prayers. It is an odd concept that ranges from trying to help Cinderella find her true Happily Ever After, to a zombie who gets bullied by other zombies and a knight who wishes to save the princess he loves above all else.

A few chapters in however, another story starts to play out. These earlier chapters are merely training as your protagonist becomes aware of an ancient battle taking place between angels and devils. Again, it is all very tongue-in-cheek and there is a layer of silliness over the entire proceeding. If you are someone who has to have an incredibly serious storyline to enjoy a game, you probably will find yourself rolling your eyes here a bit too often. However, I found it to be quite enjoyable, because the serious notes were drizzled in frequently enough to keep me interested in how the story was developing.

The game itself is an interesting hybrid of strategy and RPG elements, all wrapped around the roguelike genre of exploration. The first couple of chapters were plenty easy, but the boss battle of the fourth one definitely tested my patience as you had to protect another figure and not just yourself. I lost that one a few times. Thankfully you have ample opportunity to level up, and the systems provided are pretty entertaining. I found myself grinding a fair amount, but never really bored by it. 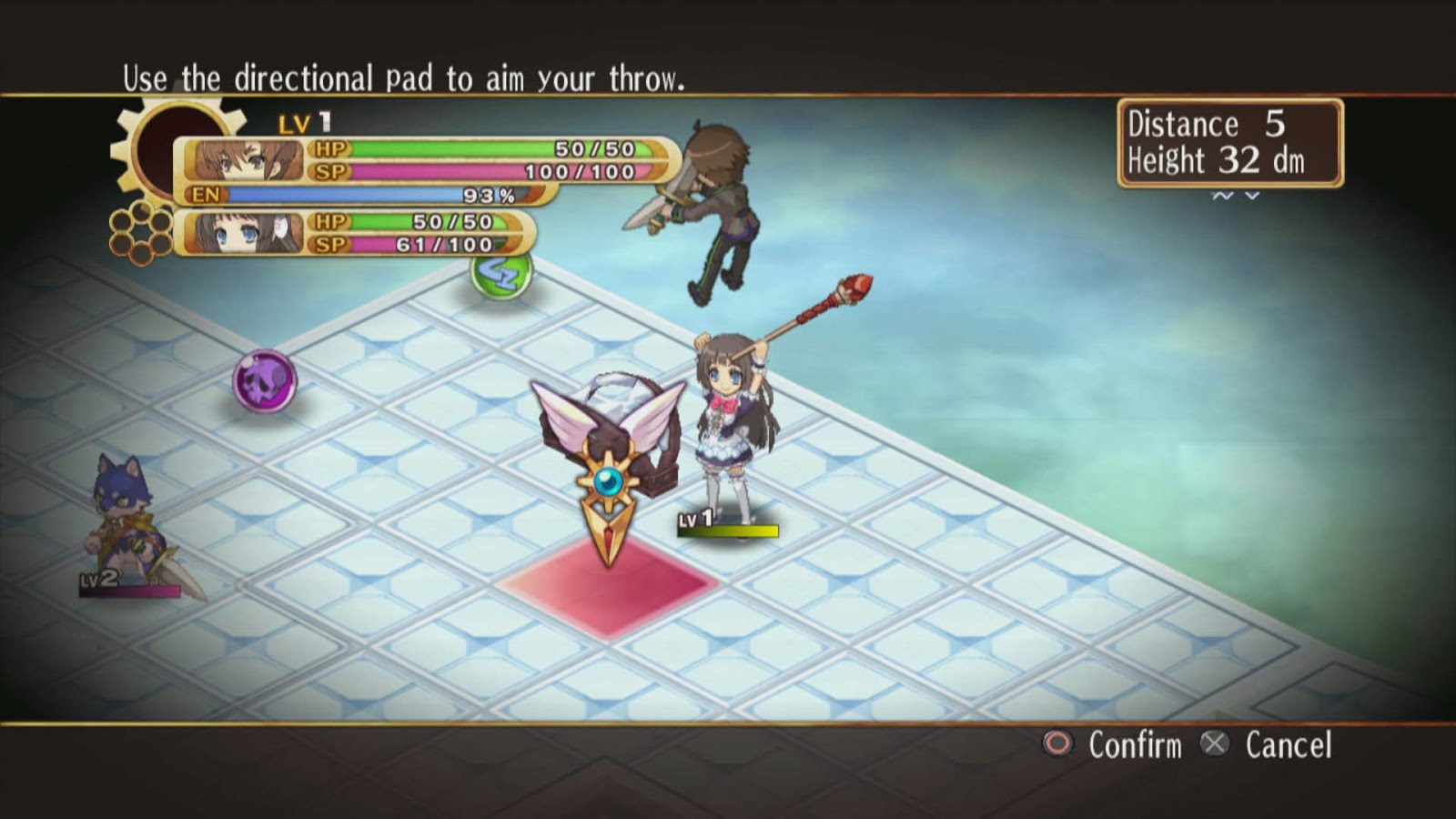 There is a sort of cute, minimalist style at play here that has a certain charm to it that I can best describe as… adorable. That style may not suit everyone, but I appreciated it quite a bit. The animations are pretty simple and the art lacks incredibly detail, but I did find myself impressed with how much the artists were able to convey with the character expressions during dialog. The visuals really reminded me of the Disgea series, which to my mind is a good thing. They will not blow anyone away from a technical level, but the varied levels, cute characters and plentiful use of vivid colors still made the experience enjoyable for me. 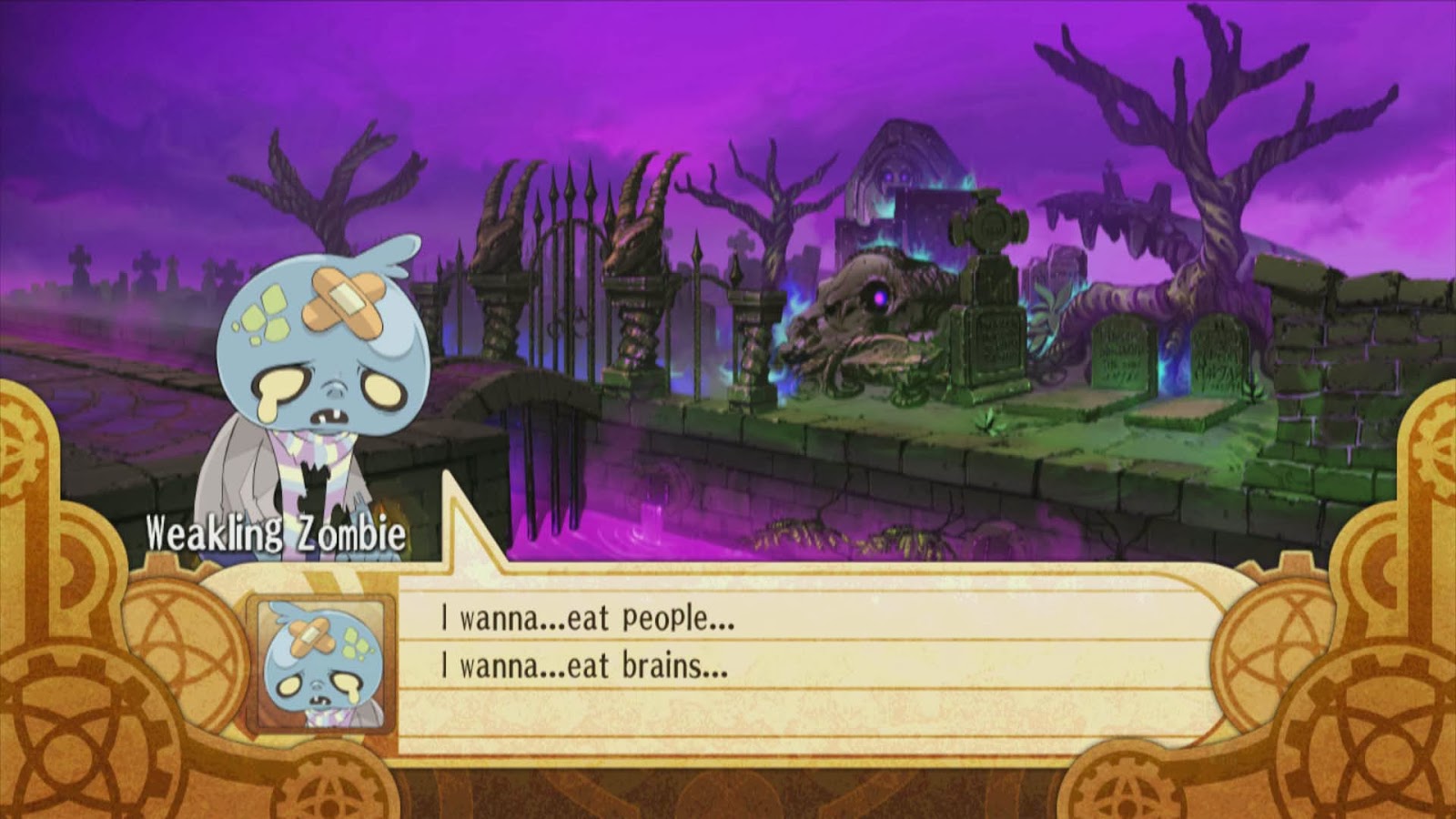 The music is pretty good throughout the game. I never found myself running off to look up specific tracks to listen to again when I was not playing, but they seemed to compliment the levels and action pretty well. The majority of the game is voice acted as well, and while the quality of the voice acting is generally good, there are a few characters who fail to hold up as well as the rest of the cast. That being said, the actors suited their character roles nicely, and added a good deal to the story’s humor. In particular I enjoyed my adorable ‘personal angel’ and her mwahahaha laugh. Don’t judge me. 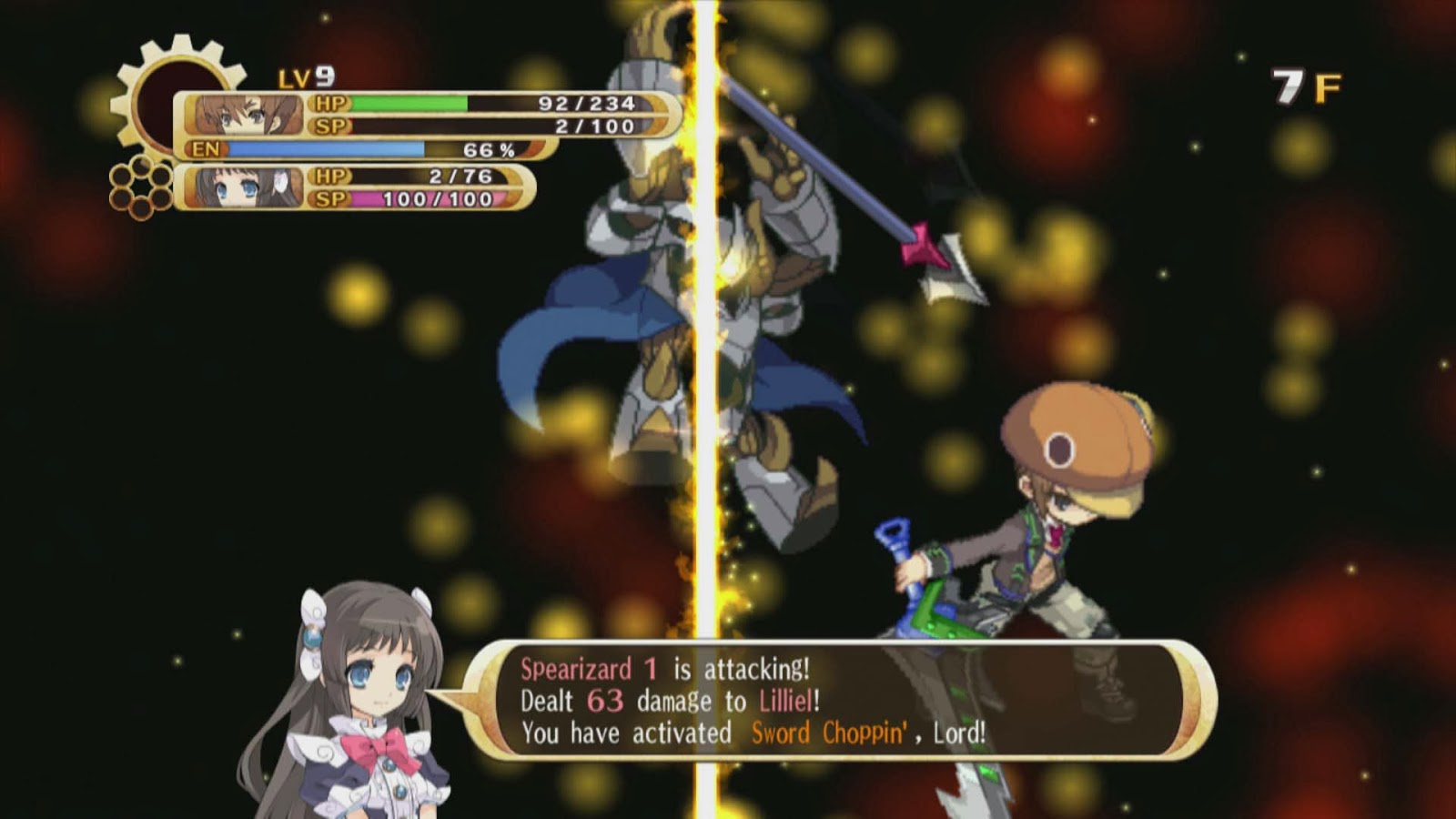 Okay, this is probably going to be the meatiest part of the review, but there are several systems at work in this game, and while they are interesting – they are not necessarily easy to describe. At its heart, this is an RPG title. You gain experience and money, and you gather loot as you wander through the various dungeon levels. I mentioned that this game is classified as a roguelike, and that is because the levels are randomly generated each time. Also if you do die while in there, you lose any of the gear you were carrying with you. Now this right there may turn people off, and I can relate as the roguelike subset of RPGs is not my favorite. Thankfully the other systems kept me hooked.

Every time you head out and adventure, you gain levels. When you finish the level (or die), your earned levels are added to your ‘total levels’. Then the next time you enter a dungeon, you are back at level 1 (while your total levels remain at their cumulative score). However, these ‘total levels’ also impact your statistics, so that sense of progression is still there, it is just shaped a bit differently than normal.

Equipment also gathers experience when used, and when a piece of gear reaches max, it attains ‘burst’ status. At that point, it is essentially broken – it loses stats overall. However, when you take that gear to the blacksmith, you can have it strengthened. This allows for it to upgrade and become more powerful, and it lasts longer before bursting again. You can also synthesize equipment of the same type, like two longswords, to create a single better blade.

The burst mechanic is also useful for a couple of other reasons. One is the customizable stat points you can put into your main character and your angels. When equipment bursts, you can add an addition point to attack, defense, speed and hit accuracy. Also, equipment that has burst can be sold for twice what its standard, just-found gear can.

Combat takes place on a grid where you move about quite freely, until an enemy comes into range. Once they see you, every move, attack or item use takes up a ‘turn’. In that turn all the enemies (and your companion angel if you have one) also can use a skill, move or attack. This gives the actual combat gameplay a tactical, turn-based feel that suited me quite nicely. That the dungeons are randomly generated also meant that going back in to explore (even if grinding repeatedly) is changed up a bit every time.

As you walk, combat and interact with things, your energy will go down. If it reaches zero (and eating food can replenish it), then your hit points start to drain rapidly as well. This gives you a couple of different things to monitor during your exploration. 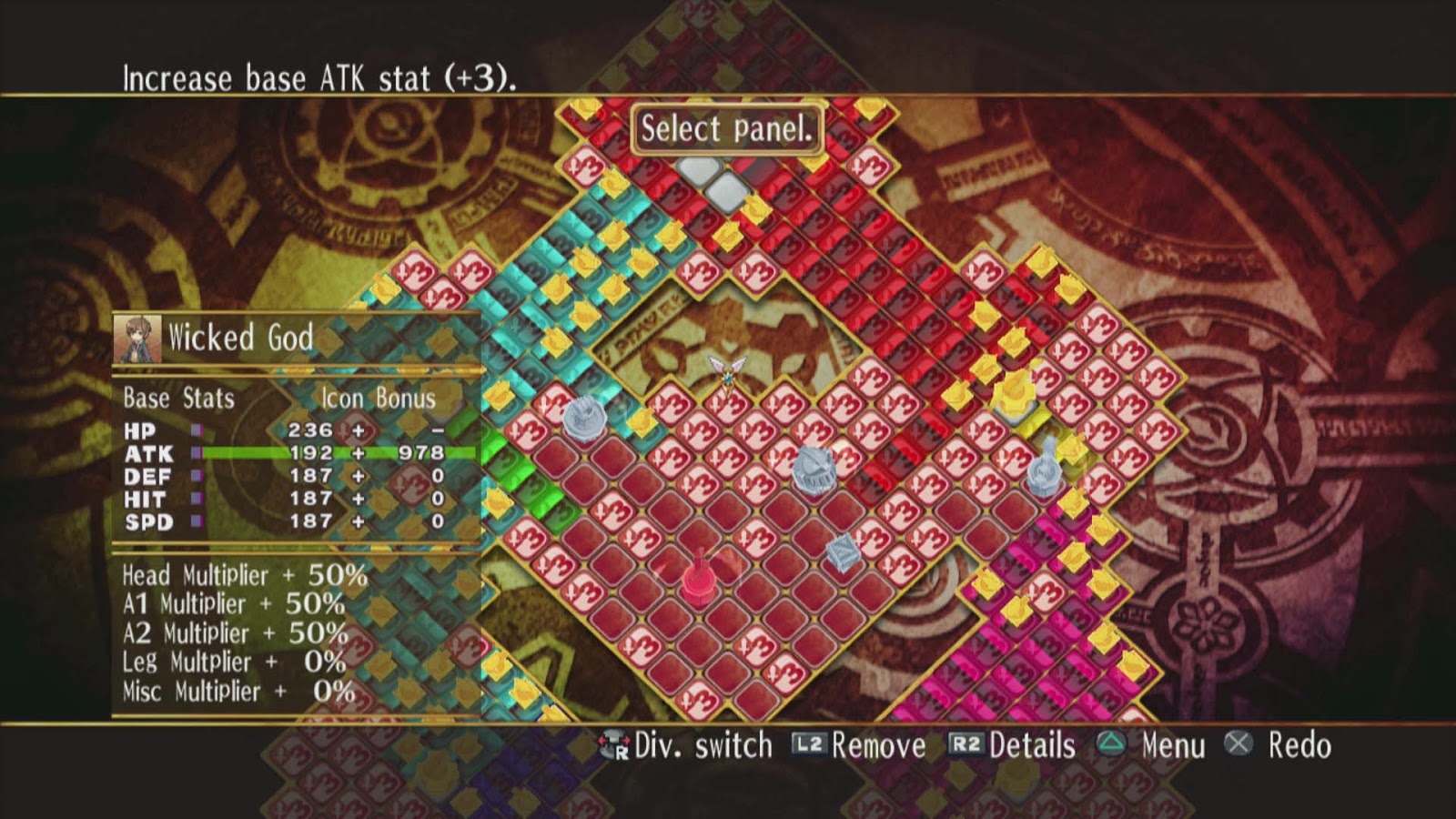 Much of my feelings about this score are reflected in the above section. The gameplay really just clicked with me, and I enjoyed building up my character. The story amused me and kept me curious what was coming next as well. That the stages are randomly generated certainly helped to keep things fresh. Also, each of the prayers or ‘worlds’ they played out in were quite different as well. The first couple were similar in structure as you wander about a map comprised of long passages and smaller, open areas. Later there is an underwater one where your line of sight is greatly inhibited, but completely wide-open to traverse. Yet another takes place in a great spirit library, where you are walking around on a three dimensional cube that has barriers up in some places but not others, lending a sort of puzzle element to the exploration. 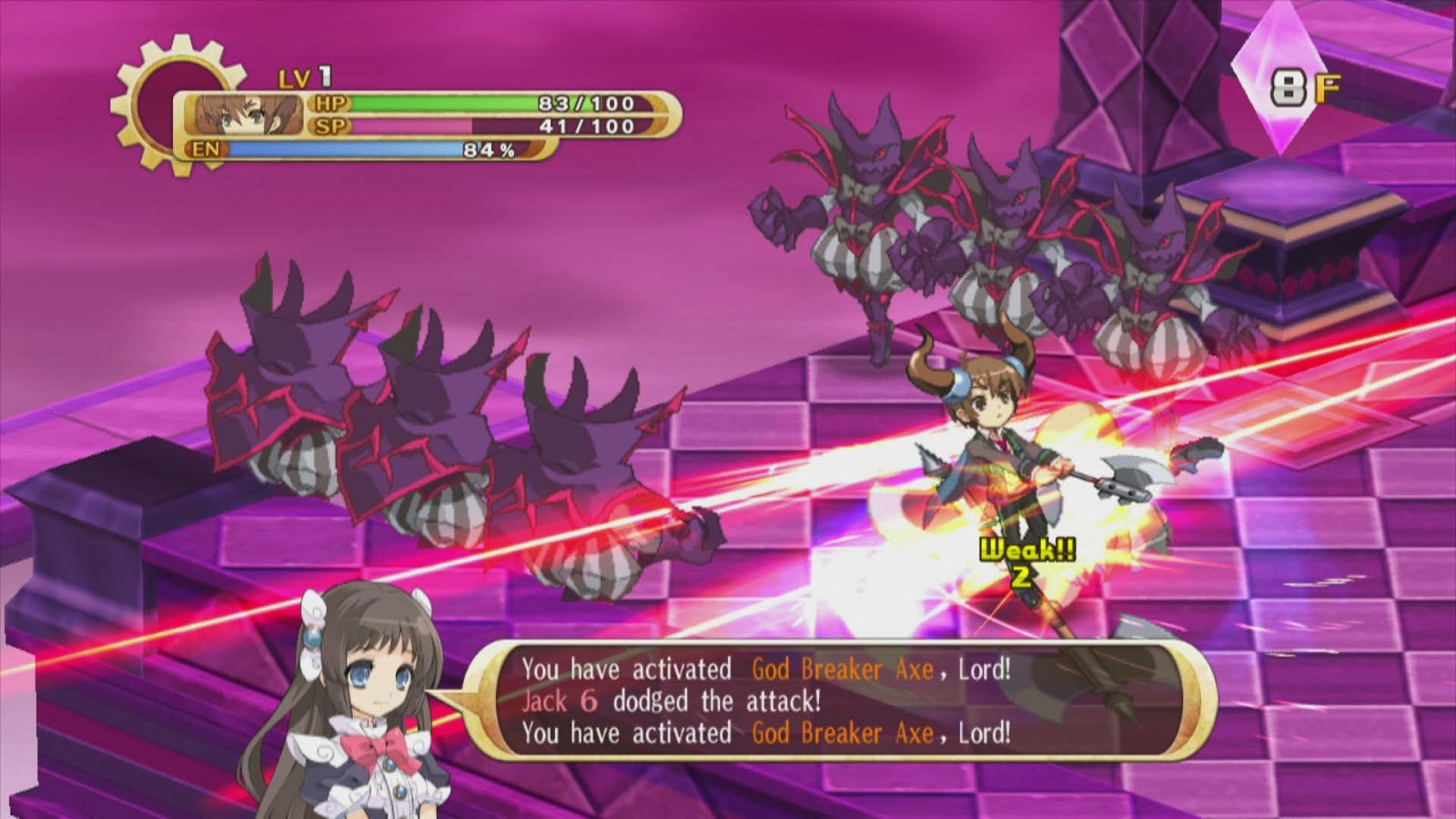 This is a game that will sneak up on some people, but I think NIS America has an amazingly entertaining title on their hands here. It can be tough – the rules continually ‘change’. This can apply to the boss fight in the one level where you have to protect the knight, or to the library world where your angelic companion can no longer fight by your side. It changes your expectations going in and it is a disappointing feeling if your gear gets eaten up due to defeat, but never enough so to derail me from continuing on my quest. 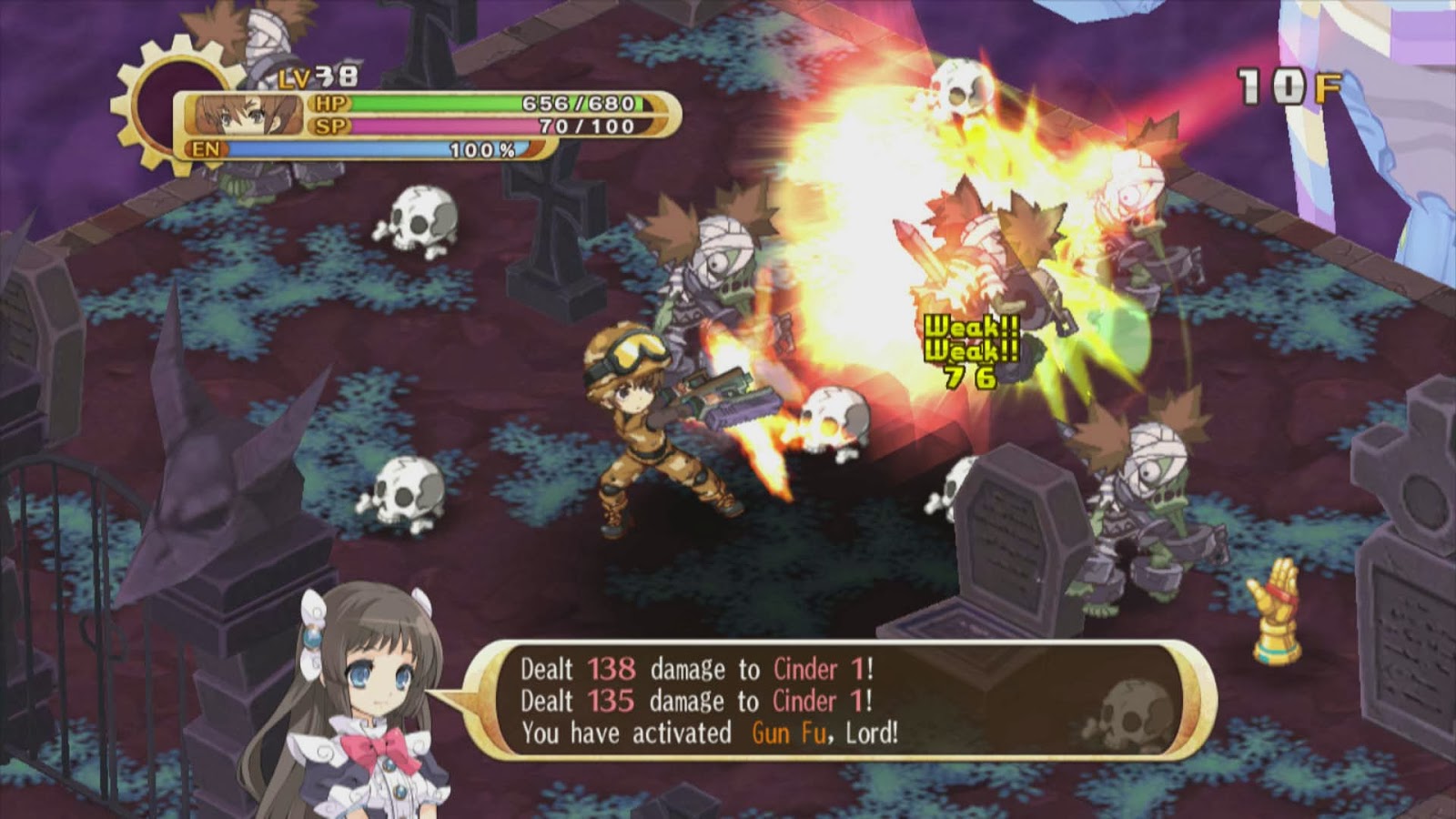