Knack is a game that carried a lot of weight on its shoulders, being one of the two retail exclusives for the recently released Sony PlayStation 3. The titular character is at times quite large in the game, but often quite small. Unfortunately this title buckled under the weight of its expectations, creating an average game that makes for a lackluster release title. 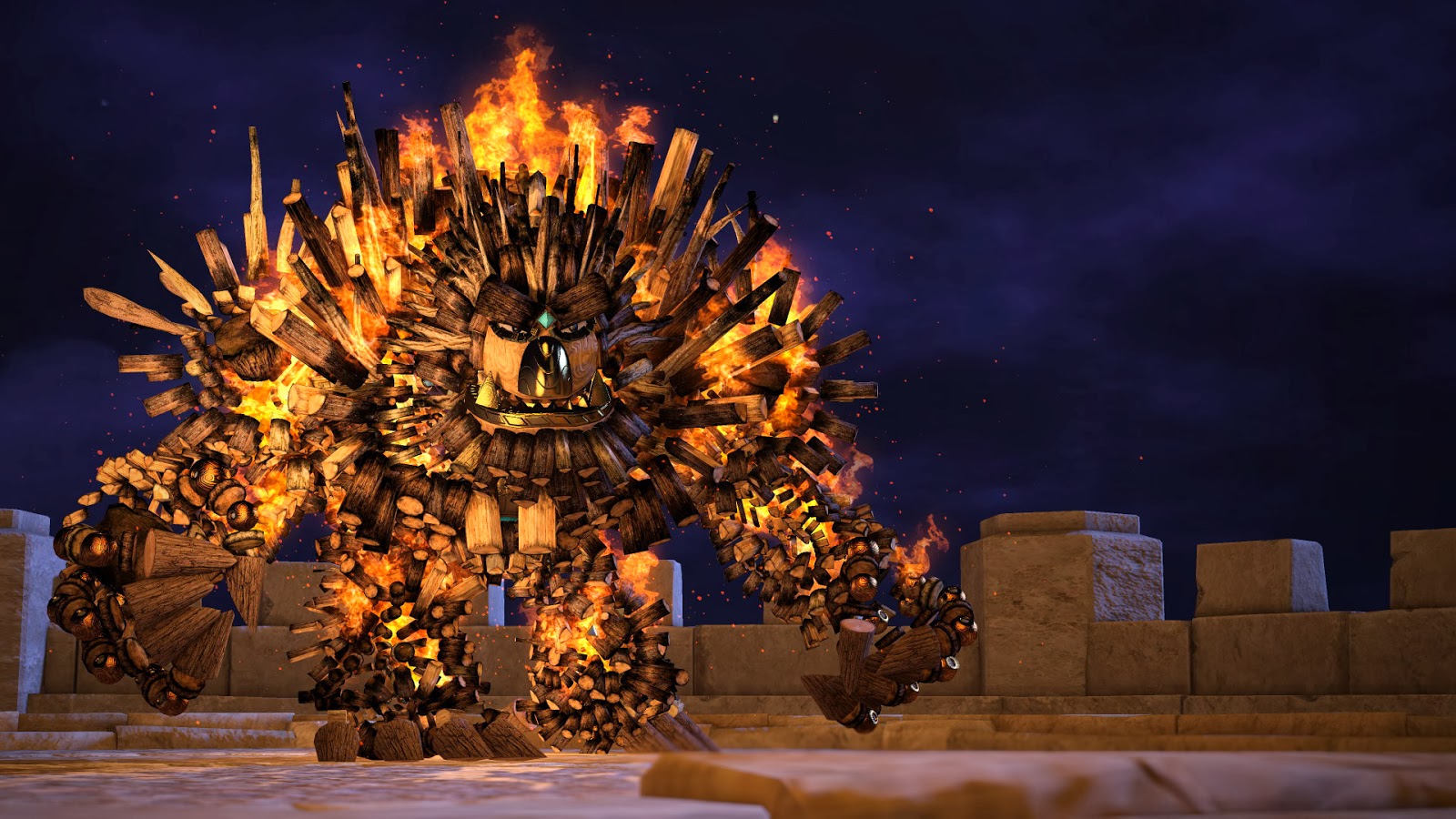 Knack is an animated bundle of runes. These runes are used in human society to power their technology, but Knack is something different. His core was discovered years earlier and proved capable of coming to life while absorbing runes to his body to grow in size and strength.

The mechanics are your basic adventuring/platforming fare, all of which are well enough executed but do little to deliver on ‘next gen’ promise. Knack just does not hold up under the close scrutinization that comes with being one of only a handful of release titles, which is a shame because it is not necessarily a bad game, just an uninspired one. 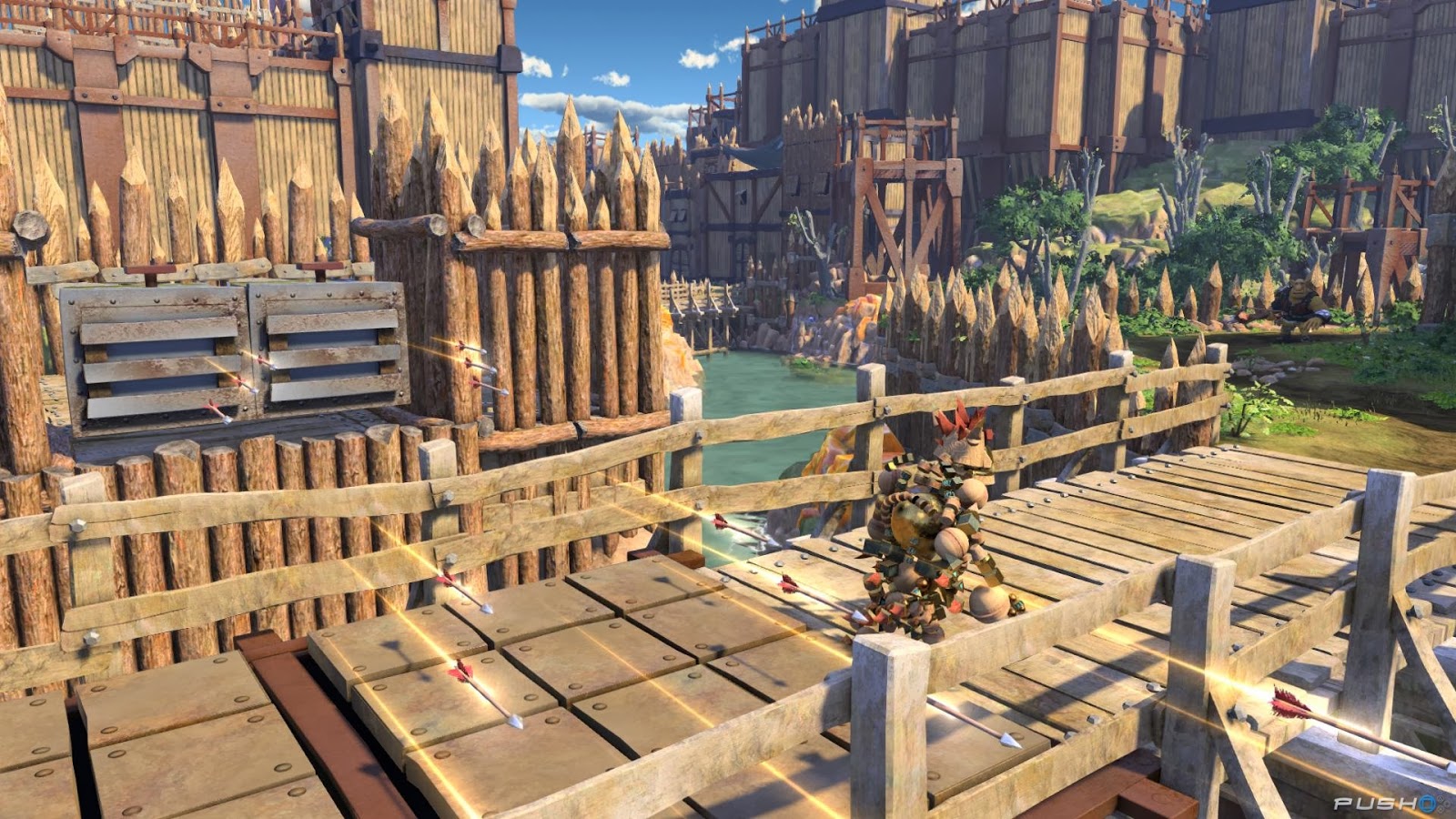 At times Knack can look really good, presenting a world with rich, vibrant colors and a fair amount of detail. Everything is animated fairly well, without slowdown. In particular, I really enjoyed Knack’s character design, which casts an intricate shadow that properly reflects the various small runes that make up his body. However, nothing here is terribly startling either. The art design will probably be received in divided fashion, with human characters looking like something out of a Dreamworks or Pixar movie, though sometimes stiffly brought to life. Worse yet are the largely static environments. If you cannot smash it, the environment generally does nothing. In an early forest stage I was running to bushes and trees, but they remained perfectly still. Until later levels with churning gears or some wind blowing a few things around, there was almost no animation in the environments. This created a world that felt very lifeless, unfortunately. 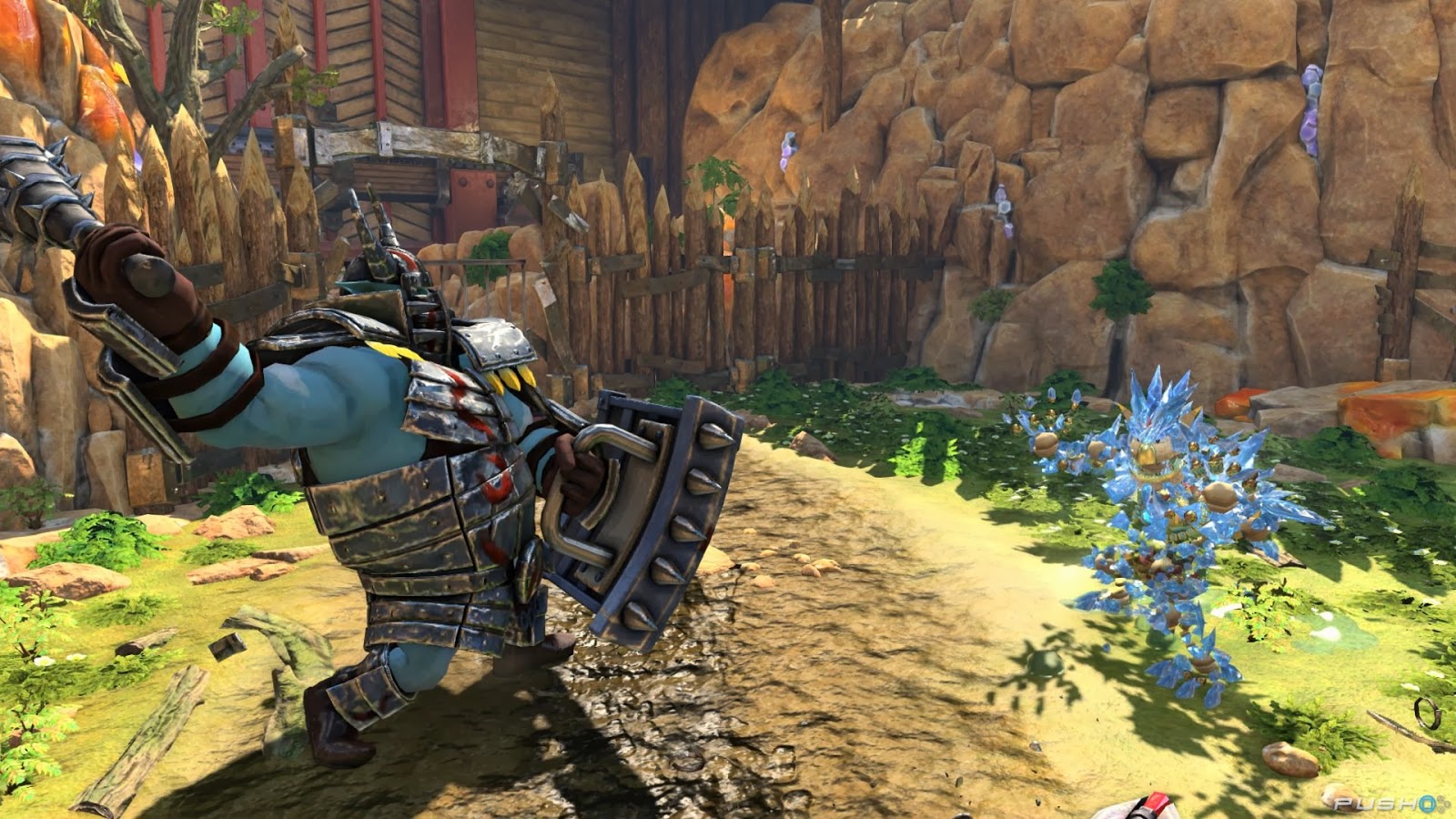 The music never really gets in the way, but it never really impresses either. It is often fairly quiet, and this subtly is appreciated, but quite often it goes unnoticed as well. The sound effects have a tendency to be pretty repetitive. There is not a wide variety of enemies, and Knack himself is somewhat lacking for skills, so you tend to hear the same things over and over throughout the adventure. There is a fair amount of voice acting, and it is also somewhat average. No one really embarrasses themselves here, but the already thin story receives almost no boost from the actors either. I feel as though Knack is suffering through something of an identity crisis. The visuals are bright and cute and look as though they are geared toward children. The combat is also quite simple, with a jump, a basic ground attack, a basic jumping attack and three special attacks comprising about ninety percent of the gameplay. Knack can be pretty unforgiving with difficulty though, especially with some of the fights near the end of the game where you are taking massive damage, even on easier levels of difficulty. My youngest daughter did not find it terribly fun, and even my son who games quite a bit himself felt that Knack was a clunky, slow to control. A few puzzle elements get sprinkled in here and there, but really it is mostly about jumping over an enemy’s ranged attack, dodging out of the way of their melee attack and countering with punches on the ground. Lather, rinse and repeat about a thousand times. 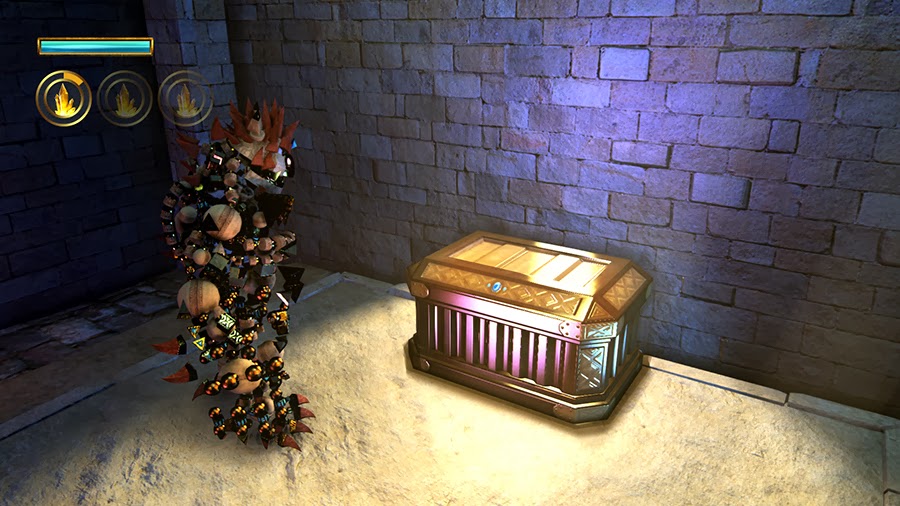 The story feels like it tries to do too much, with characters that are largely uninteresting. Maybe better voice performances would have helped, but the basic tale being told just never really got me invested in anyone. Even Knack hardly says anything, and mostly just runs around doing what he is told by others. With such simple combat in place, including only three special attacks, the game starts off just fine but its lack of depth really has everything feeling like a bit of a slog by about the midway point.

There is almost no exploration to be done, the game is very linear. This helps to keep things focused and moving along, but it also has a tendency to feel somewhat limiting as well. There are some collectibles you can find along the way that create gadgets with useful abilities, or crystals that can give Knack new powers. Clearly the developer meant for you to play through Knack multiple times so you can try these out, but unfortunately I never really had a desire to do so. 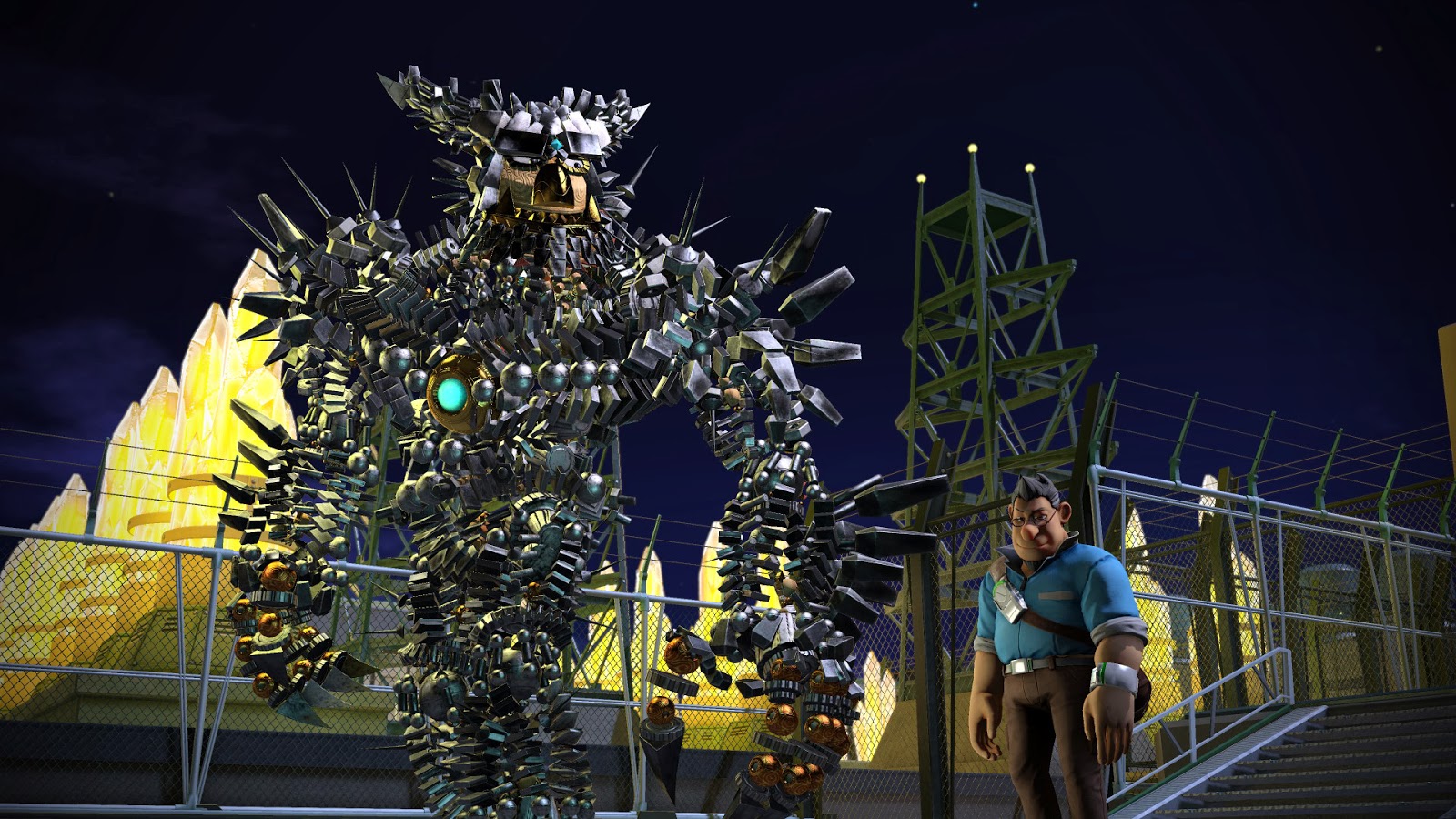 I really wanted to like Knack more than this. The visuals had a certain charm to them and the gameplay hook of an ever-growing character seemed appealing. Unfortunately the execution became something of a mind-numbing process that had me awaiting the game’s end mostly to have it over, as opposed to really caring about the story line itself. That is not to say Knack is a completely failure. The characters and combat are approachable, and while combat damage feels a bit too high at times, the puzzling and platforming parts are seldom frustrating. If you like the formula, then the gadget and gem carryover into a New Game+ gives Knack some decent replay value as well.

Still, under the spotlight of being a new generation launch title, it feels as though the enormous expectations crushed the shoulders of little Knack with his giant-sized counterpart nowhere to be seen. 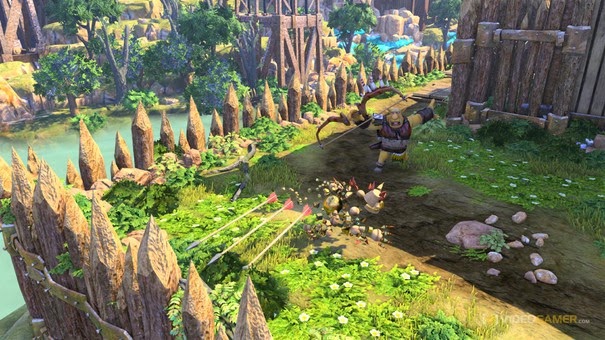