I love that this hobby of ours, playing video games, comes in so many different shapes and sizes. Sure, everyone has their favorite genres – one of mine is the strategy/RPG game. However, there is a lot of room for games that do something different, and Danganronpa: Trigger Happy Havoc is one such title. 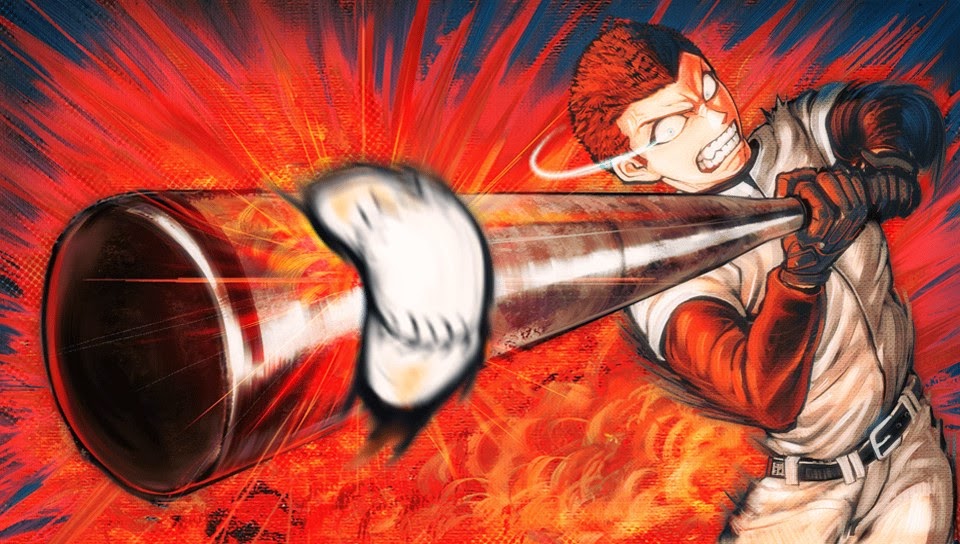 Of course, it is not just enough to do something different – you need to do it well to get people interested. That is why a narrative heavy game like The Wolf Among Us needs to sell you on the characters and stories to make you invested in what is happening. On that front Danganronpa succeeds with flying colors. Even in the very first chapter, favorite characters began to creep out from the crowd and as things progressed – ones who appealed to me less in the beginning began to show more layers and kept me invested in what was happening.

The introduction sets the stage for a story that is very different than it first seems. The primary protagonist wins a lottery (reminding me somewhat of the main character from The Guided Fate Paradox in that respect) to attend a school that is for the most gifted, elite students in the world. However, the events in question spiral out of control very quickly, and the protagonist is presented with trials that are completely different than what he signed up for. 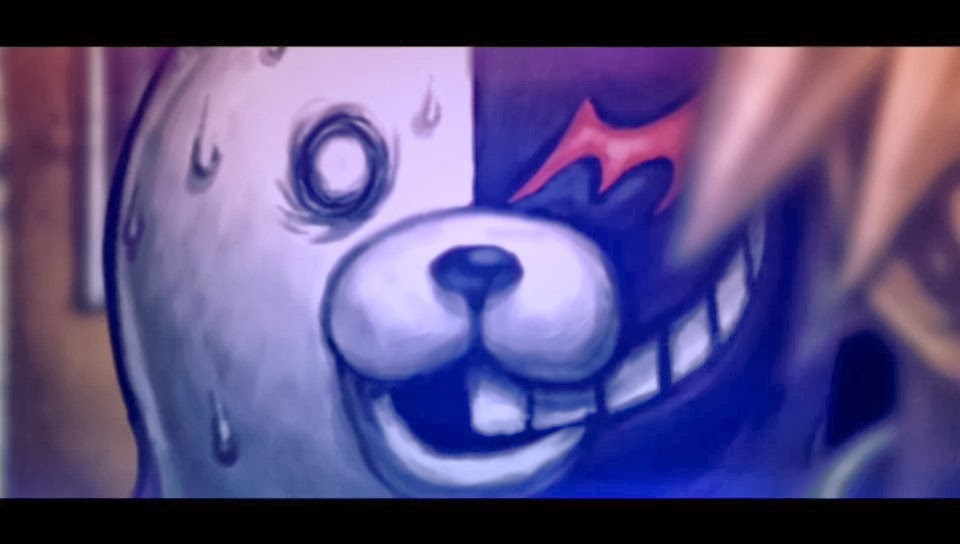 The anime style graphics are very lightly animated, but the characters are beautifully drawn and there are some neat touches in place (like the way the classrooms pop into place pieces at a time). Each chapter concludes in a special event that is tense and visually very well constructed. A special nod to Monokuma, as odd a foil as you will probably see in a game, but also visually striking Yin-Yang appearance. 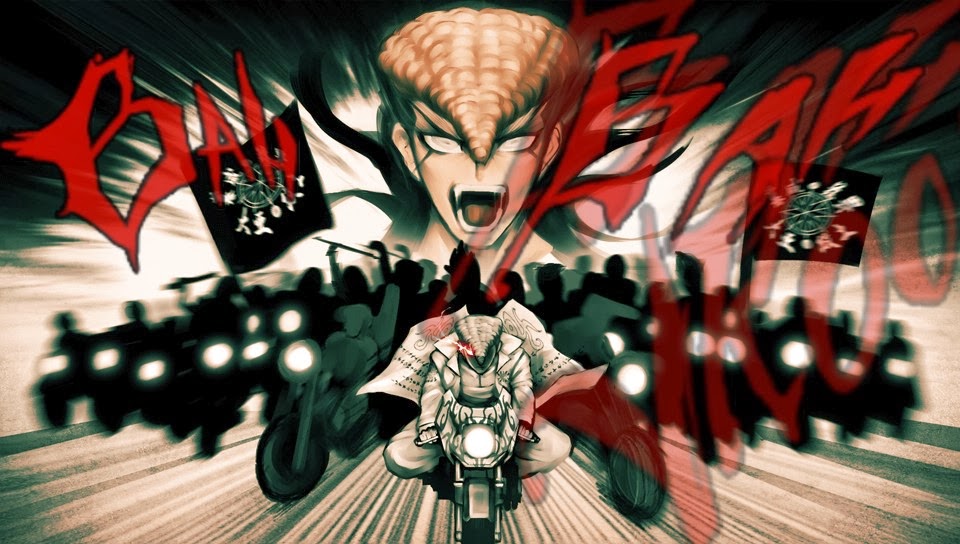 The visual presentation might not push many technical boundaries, but it is clean and easy to follow. The music and voice work to be had in Danganronpa is outstanding from start to finish. The voice actors breathe substantial life into these characters, and during some of the games more intense moments, I would sometimes find myself pausing to appreciate how good the soundtrack was at manipulating my emotions. Danganronpa may be described as a visual novel, but it is the audio aspect that helps this game to stand apart from the crowd. 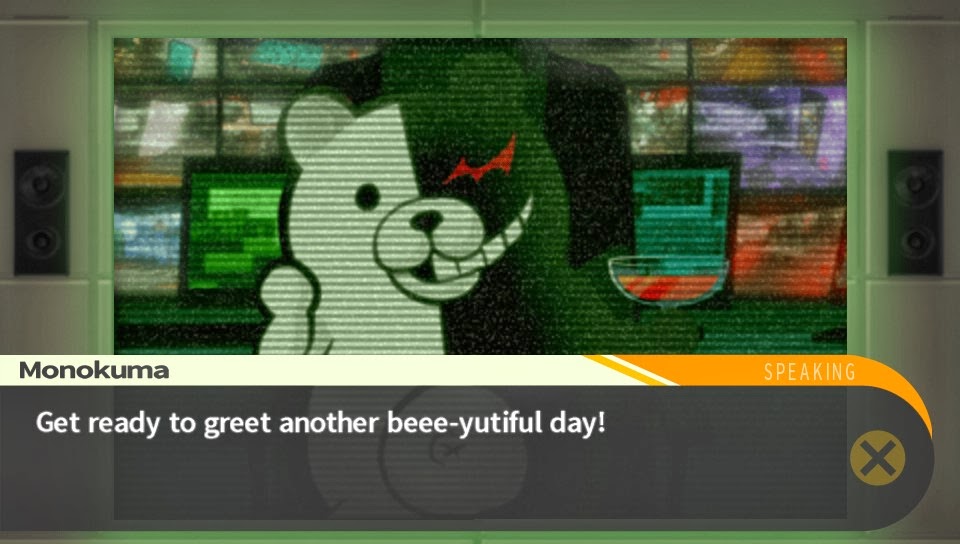 This could have been a slog. There is a ton of text, and very little in the way of ‘action’ to be had here. Instead movement is generally good – with the option to run and speed up the process. Dialogue can be sped up if you have seen a section already. The end of chapter content is always incredibly tense with some good variety presented. Handy items like a button to show what can be interacted with and some touch interface that feels completely organic make the experience more effective.

There are two small complaints to be made. One is that you can find yourself seeing repeated dialogue if you accidentally click the same thing twice in a row, and you really cannot skip it. The other in in clicking the objects. Early on, I just thought I had to click a general region. Later I realized that you had to be pretty precise, as there are often overlapping pieces of environment. This can lead to the former issue of repeated strings of text to reread. 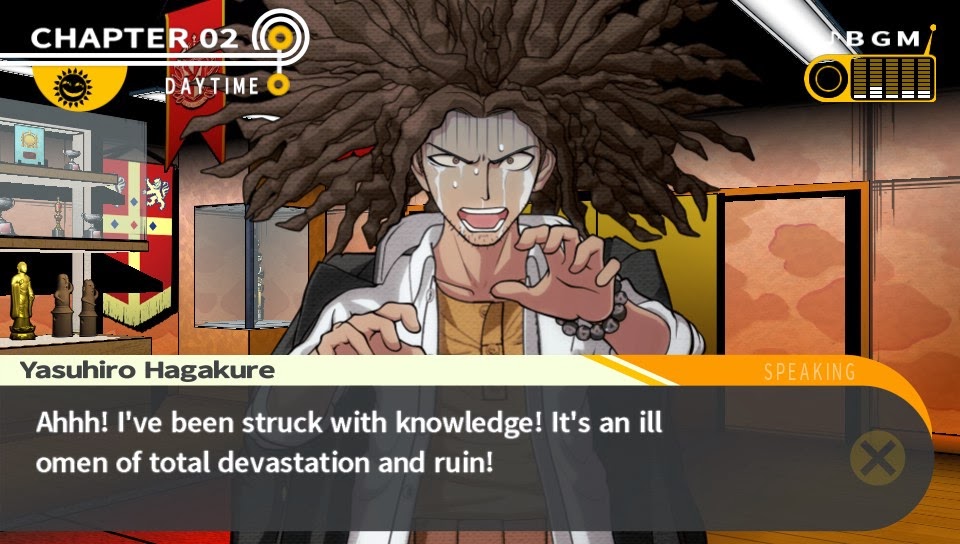 The story itself is amazing. For a game billed as a visual or virtual novel, it has to be I suppose. Then again, there are a lot of games out there that try to do something specific but do it poorly – that is not the case here at all. Danganronpa has a great story, interesting characters and I was incredibly invested in seeing how the events in the story played out. You can log a few dozen hours with Danganronpa as you explore the school and talk to your fellow students. If there is a knock I have on this game, it is that the replay value is fairly limited. The story does not really evolve with your choices the way some games that are narrative driven do. I do not necessarily mind – the designers had a specific story they wanted to tell and they told it expertly. However, that lack of potential variation does mitigate the potential for surprises and new content on a subsequent playthrough. 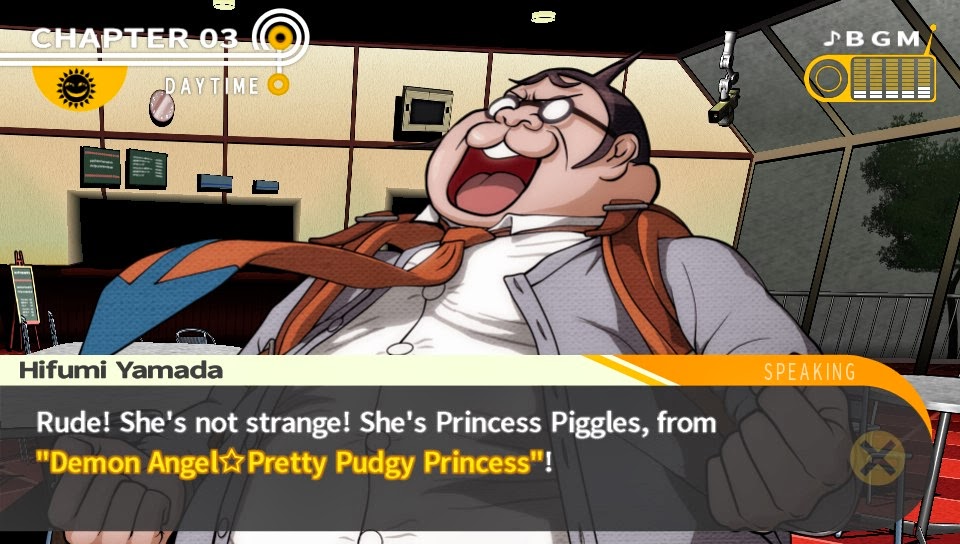 This game is probably not going to appeal to everyone. If you need breakneck action or deep systems that support things like leveling found in a typical RPG game, you will probably come away from Danganronpa disappointed. If you enjoy trying something different, a game that has a more distinct, slower pace and an engaging story – then this game is probably perfect for you. Personally, this is my favorite Vita offering since I played Persona 4 Golden last year.

Oh, and if you do pick this game up (and you want to, believe me) and enjoy it as much as I did (odds are, you will) – then I suspect this announcement from NIS America that Danganronpa 2: Goodbye Despair is coming to North America and Europe this fall will be music to your ears! 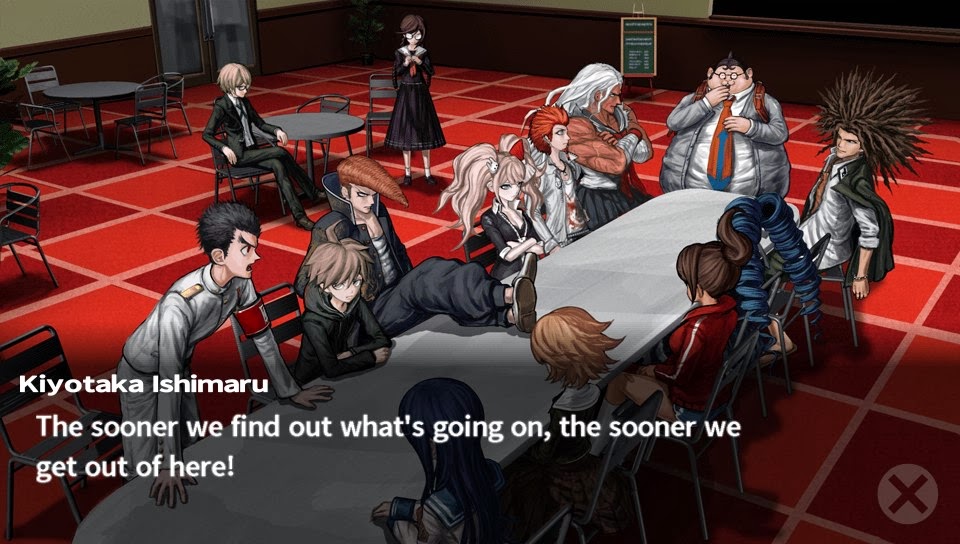