Today’s review comes courtesy of a new contributor to the site, Robert! We will be seeing more from him soon!

Set in the future, Crysis takes place on a small island primarily controlled by
the KPA (North Korean military), where you control ‘Nomad’ a member of a U.S.
Special Forces team (Raptor Team) that uses a newly developed armor called a
Nanosuit (it uses nanotechnology to do neat things like optical cloaking, armor
hardening, or exponentially increasing your speed and strength). 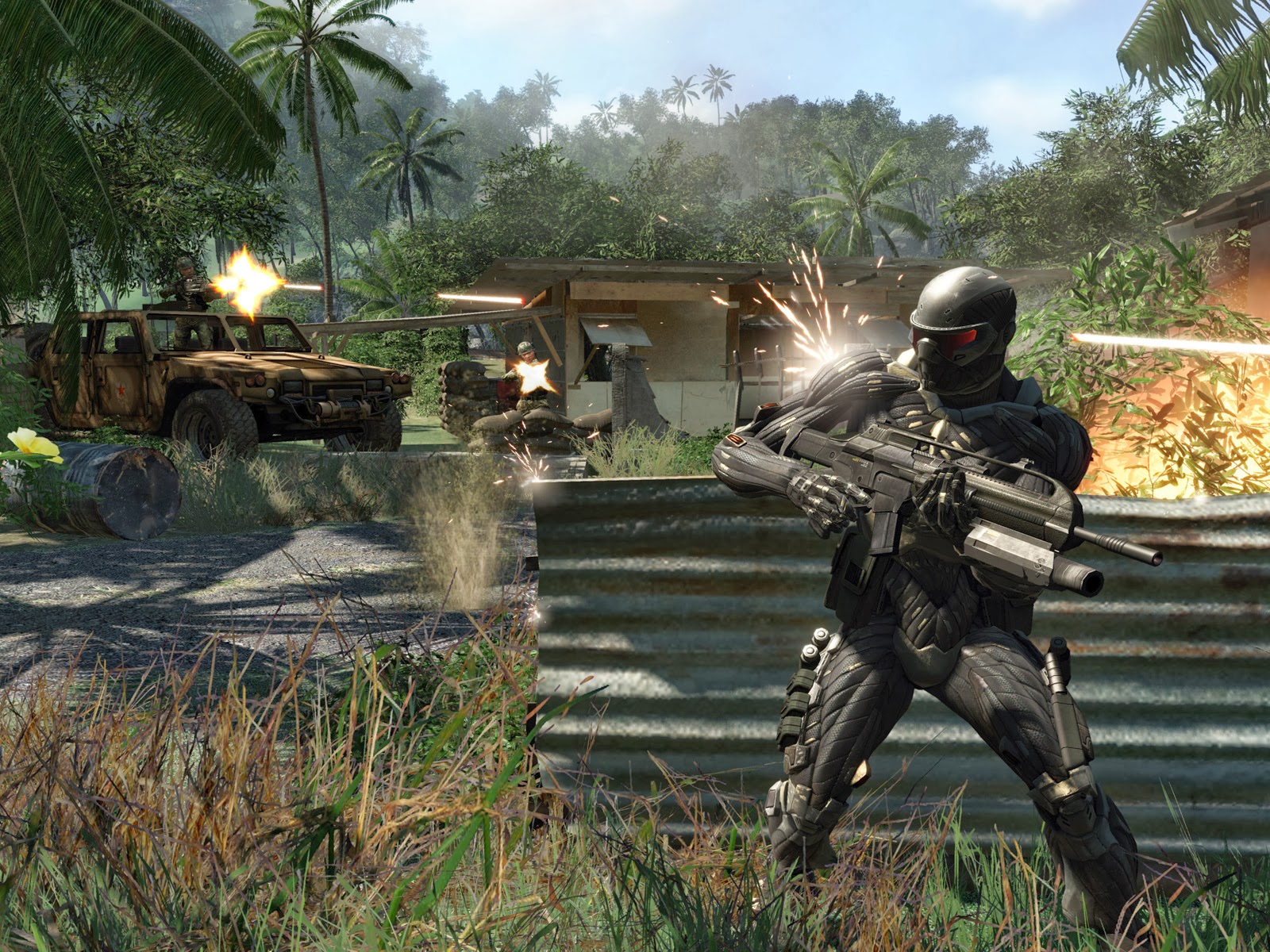 With an array of customizable weapons, numerous vehicles, and multiple strategic
options for each encounter, your 7 or so hours spent on the Lingshan Islands
(where Crysis takes place) will be filled with amazing sites, tactical
flexibility (run-and-gun, sniping options, or stealth options to bypass certain
objectives), and, as far as first person shooters go, one of the better
single-player story lines you’ll find in modern shooters. 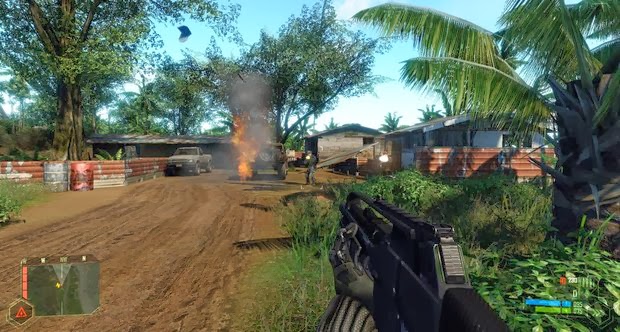 When Crysis first released on the PC it was, for lack of a better term, a beast.
To get the highest quality out of the game you needed to have an uber-rig that
cost two arms, a leg, a firstborn child, as well as triple-mortgaging the house.
In short, it’s gorgeous. It has aged quite well and for the sake of this review,
I’ll be covering just the Xbox 360 version. Fortunately hardware has come a long
way and the 360 handles the strain Crysis puts on it quite well, I can think of
a few times where the the different particle effects (smoke, explosions, sun
glare, motion blur) mashed together on screen made the framerate drop for a
moment, but it was rare (hence the reason it was noticeable). There were times
where, in some of the outdoor environments, that the draw distance wasn’t
exactly ideal for sniping, however, it is a bit unrealistic of me to desire
perfect draw distances out as far as 300-400 meters in game (based on the
range-finder in game) in the hopes of reaching out and touching someone with a
sniper rifle. Beyond some of those little quirks, the game is stunning and runs
quite well on the 360, with it’s lush, and huge, outdoor environments and the
detailed, compact indoor levels. Some of the more in-depth graphical features
that really stood out to me was that while you walk (which, by the way, when
you look down, you see your legs!) through foliage it will actually rustle and
move with you; a very neat feature that added to the depth of the game. 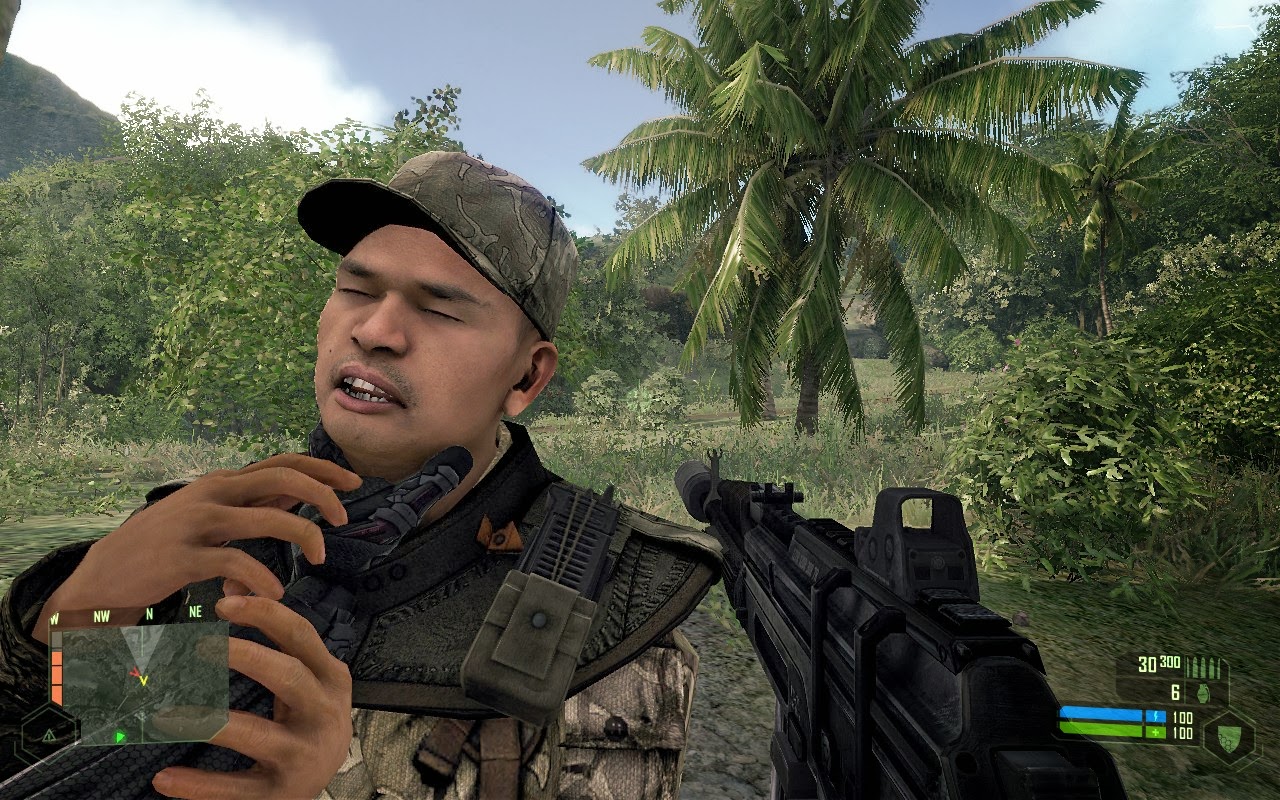 The music in Crysis, to be honest, is as forgettable as it is distracting at
times. While you do have a mini-map w/ a friend-or-foe indicator on it, I found
that I played the game mostly by sound, listening for footsteps, the rustling of
leaves, the rumble of an engine or straining to hear when a patrol unit reports
in to their central command. Outside of the forgettable music, Crytek focused a
lot of energy on the ambient sounds and the different effects and it pays off in
many different ways. Hunting / evading solely by sound is completely possible
and there are times when you’ll be crawling through the jungle and you’ll
accidentally rustle the leaves of some foliage and your breath will catch as you
strain to hear whether the KPA heard it and are sending a patrol to investigate.
There were certainly parts where you’re just trudging along from one point to
the next (through the extremely open environment, you don’t need to make a
bee-line from point A to point B, you can take any number of paths) and you’ll
hear the snap of a bullet fly by your head then you’ll hear the sound of the
rifle a moment later. It’s simply surreal. 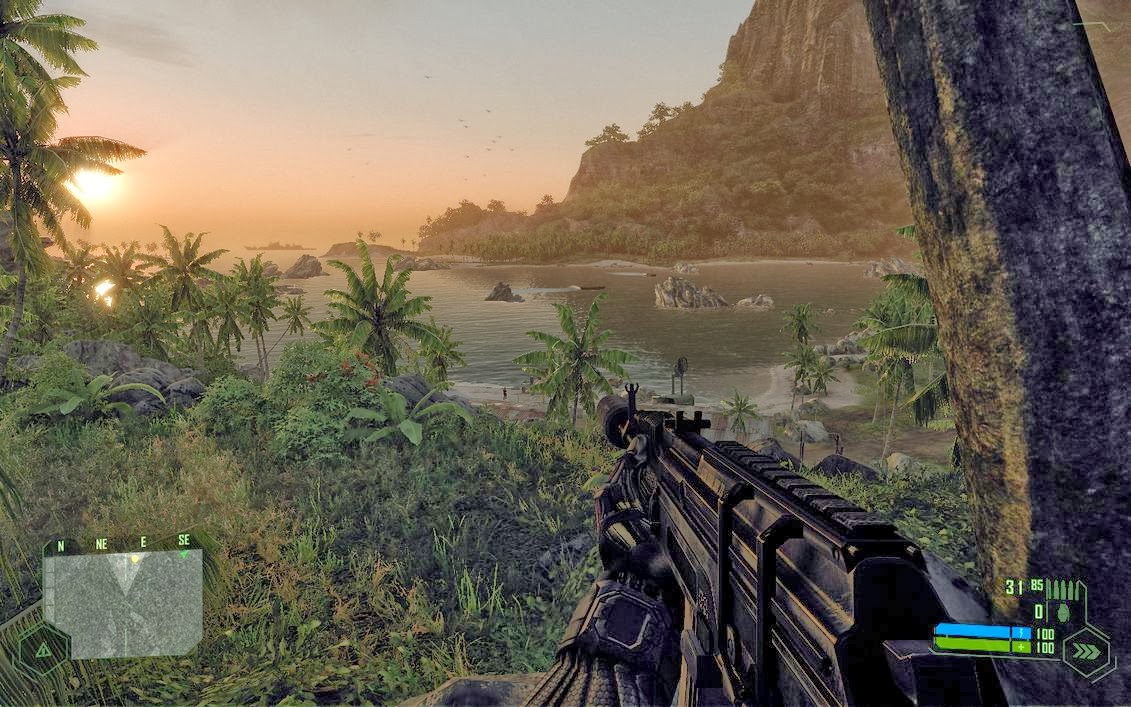 The controls in Crysis are fairly run-of-the-mill first person shooter; decent,
responsive, and adds just enough control to allow access to all of the armor
abilities and special weapon customizations, while staying away from overly
convoluted control schemes. It’s fast, responsive, and works quite well whether
you’re trying to nab pin-point accuracy for sniping or simply going full auto
the throw as much lead at a target as you can. Most buttons have two purposes,
for instance, if you tap the X button, Nomad will reload his weapon, however, if
you hold the X button in, Nomad will pick up whatever is in front of him
(enemies included, and you can use them as shields!), tapping the Right Trigger
while holding something will lightly toss the object or holding the Right
Trigger will ‘Strength Throw’ which hurls the object (or person) with immense
strength (throwing bottles to distract guards, or this them with one, is loads
of fun).

Ah, the gameplay… Crysis is, quite frankly, a first person shooter. It plays
like one, it looks like one, and it feels like one. Which is good, as it’s not
trying to be anything different. What makes it different than other
run-of-the-mill shooters is that you actually have a story that is interesting
(*GASP*) and enjoyable without trying to be overly dramatic, or cheesy. Crysis
takes itself seriously, adheres to the initial story and plot line that it starts
off with, and stays with it the whole way. I likened it to an excellent marriage
between Halo: Combat Evolved and Half Life 2, and really, I think that’s spot
on. The multiple avenues of approach to an issue, the level of customization for
weapons (you can add silencers, tactical mounts, grenade launchers and change
the sights for most firearms), as well as the vehicle combat are all inspiring,
deeper than they appear to be on the surface, and the variety adds plenty
of re-playability to the game and is in no way a case of a developer trying to
add too much content / too many features to a first person shooter. 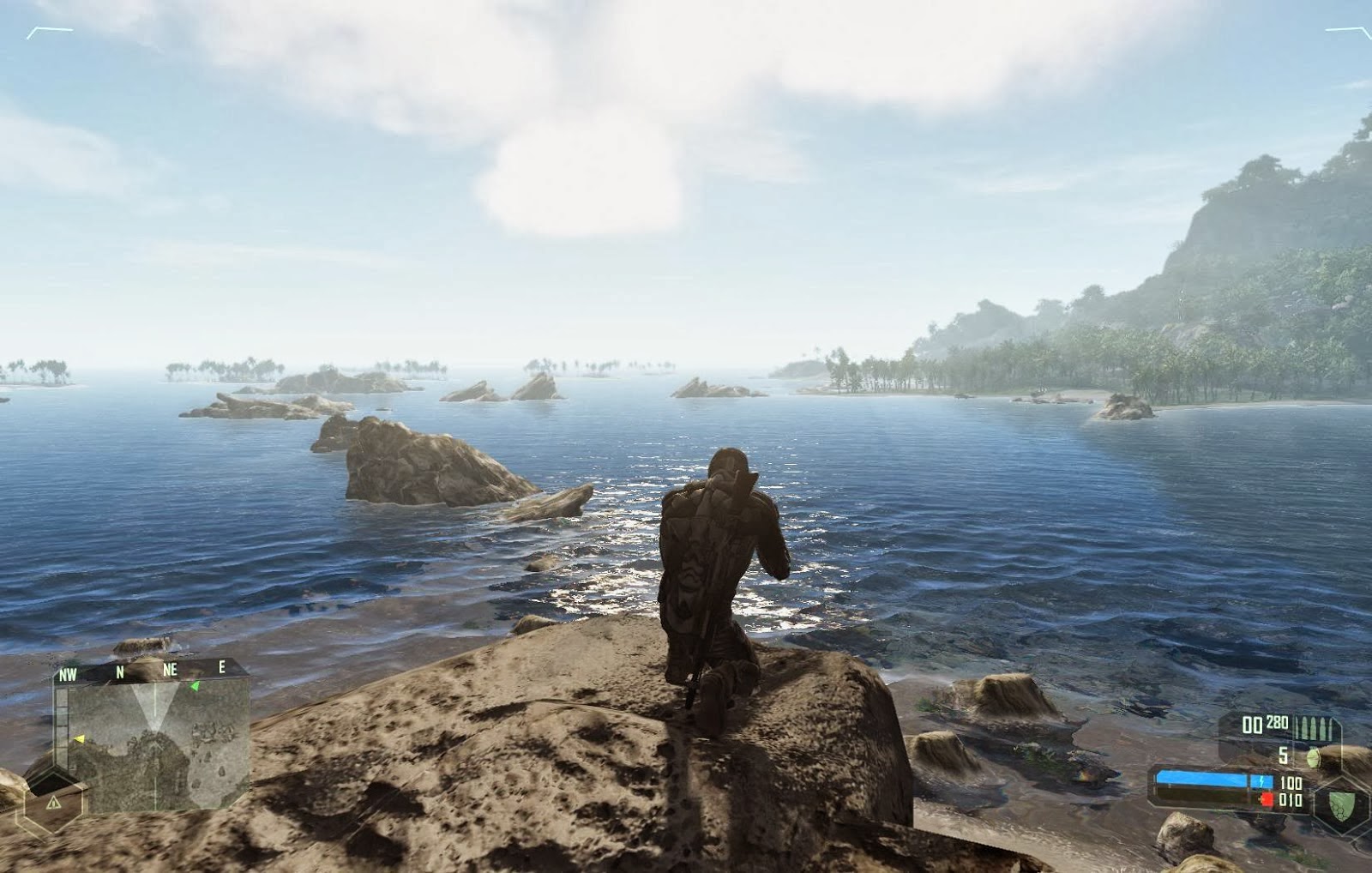 Given the multiple paths that you can take, and the different options for
altering your weapons (plus the fact that you can stick C4 on trees to blow them
up to crush the KPA) there are some fantastic options in-game to allow you to
achieve your objective in different manners adding to the replay value quite a
bit. It is, however, still a first person shooter and, at times, feels like it’s
“on rails,” though, the different tactical options certainly provide variety to
the way you tackle obstacles which adds more depth to the game than other
blockbuster FPS games. The multiplayer mode on Crysis is a bit lackluster and
difficult to locate any servers that are worth playing on, likely due to the age
of the game, so I’d be interested in hearing your opinions on the matter. 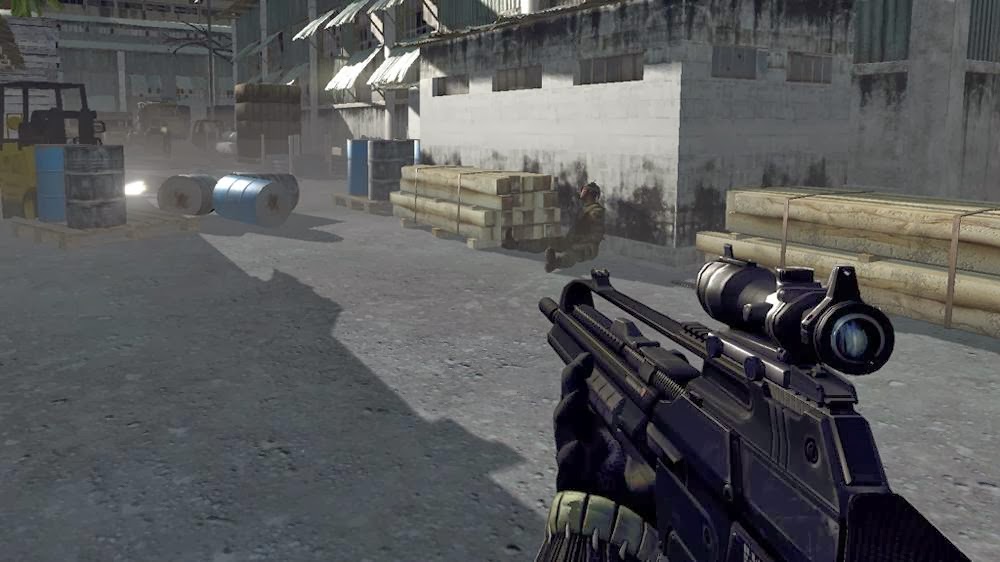 Crysis is a solid first person shooter that is definitely above the average cut
when it comes to scope and quality of gameplay. Fast-paced action, multiple ways
to complete an objective, and the satisfaction that comes from downing large
waves of enemies is certainly a lot of fun. Rarely do I ever feel so satisfied
after the single player campaign in a first person shooter (I think that the
last time I felt that satisfied was after Half Life 2’s campaign credits
rolled), but with Crysis it was a blast. I highly recommend spending the 6 to 8
hours or so in the campaign if you’re in the mood for a solid FPS that doesn’t
have a convoluted and hole-filled plot line. 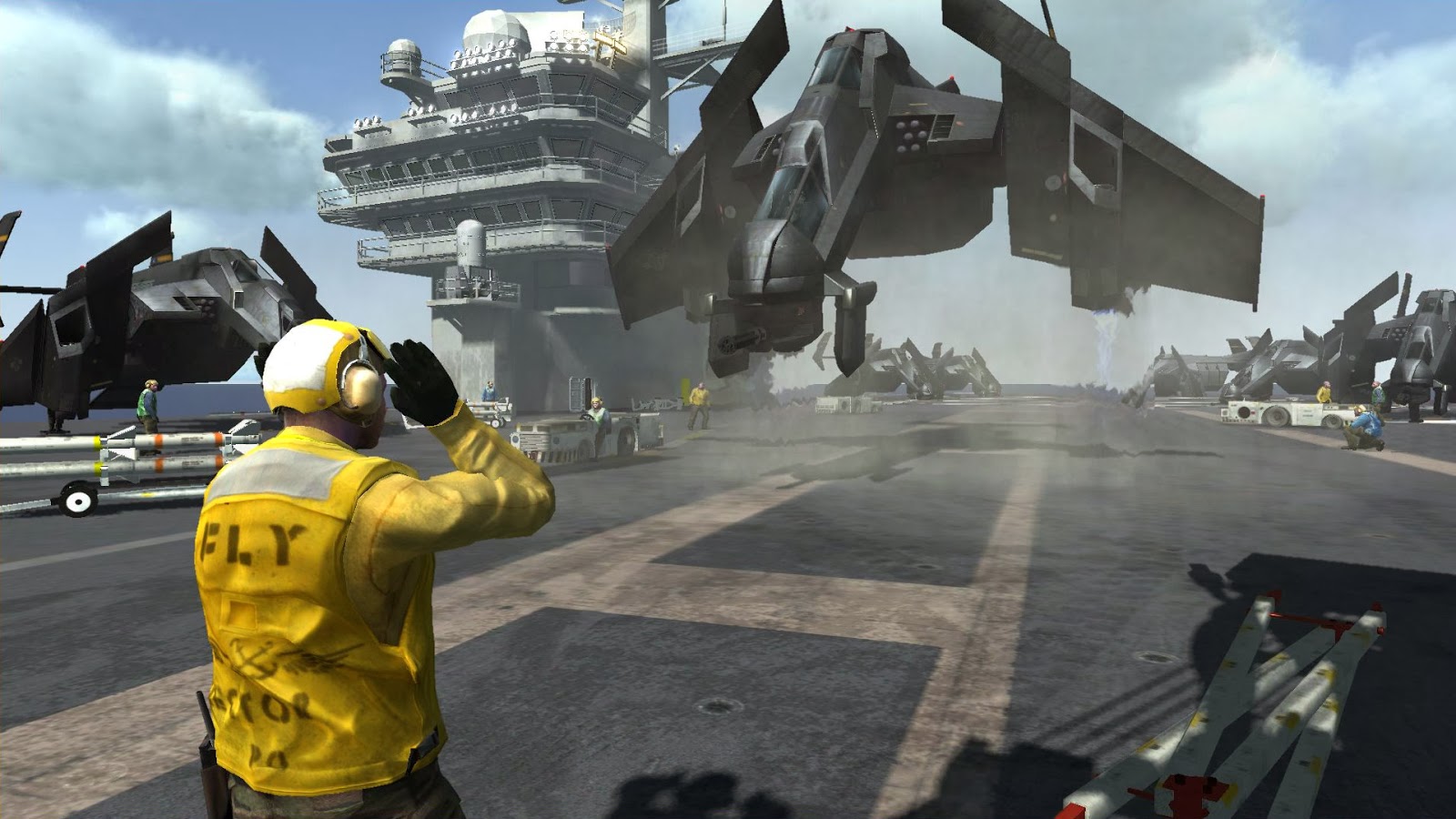