Skydive: Proximity flight is all about the speed. It is focused around diving out of a high flying hot air balloon or off of an incredibly high mountain to fuel the adrenaline-filled ride that is base jumping. The objective first and foremost is speed, but just going fast would not be enough – and that is where the real challenge comes into play. 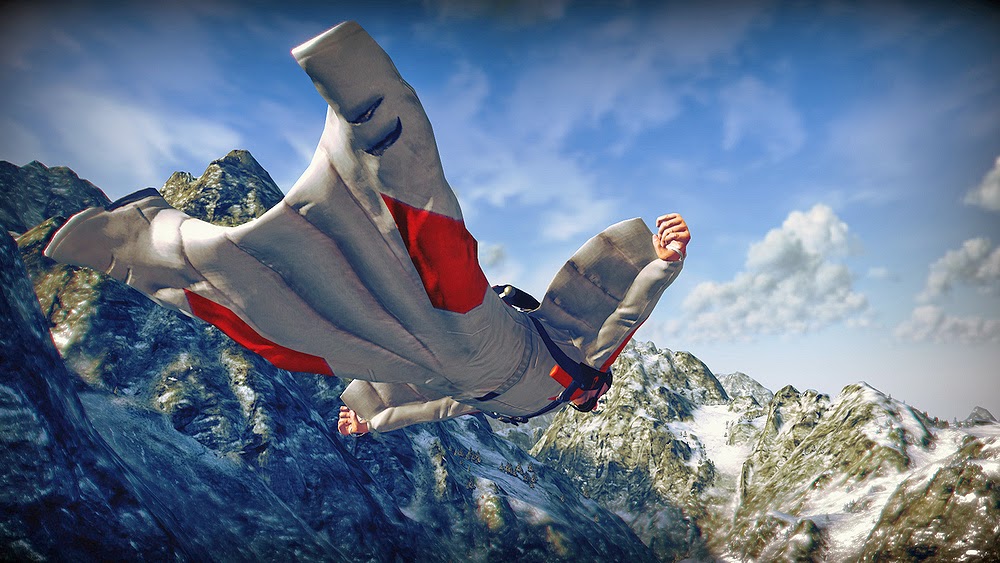 You attempt to sail as close as possible to man-made and natural hazards alike as you soar through ravines, canyons, around mountains and past beautiful castles. This is how you score more points and see more of the lay of the land as it goes rushing by – or up to you. That ground can come up pretty fast near the end as you try to make your landing. Plenty of objectives test your skill, from attempting to out race other jumpers to landing on a castle’s roof. 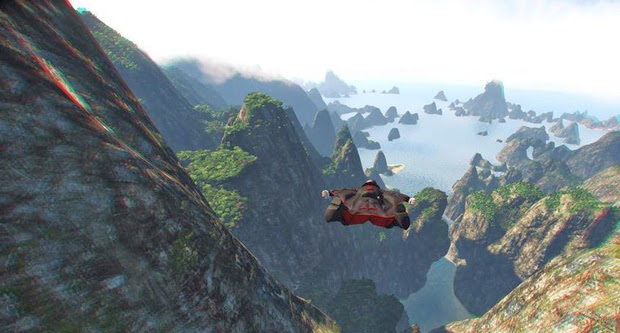 The draw distance is decent; when you are standing up at the top of the mountain getting ready to jump there is not much to see outside of some static backgrounds, though once you dive off the mountain or out of a hot air balloon, things get much more interesting real quick. Details are there, but at the speed your are moving through the ravines and crevasses, you really lack the time sit back and to ogle your surroundings. Trees look lush and healthy and the houses that are sporadically thrown throughout the course have fine little details like lights on and smoke from the chimney. I did notice, much to my joy, that the bubbling brooks and rivers actually have rapids. However, spending too much time staring at the scenery can be hazardous to your health as this tends to land you face first in a nearby mountain or bridge. While the draw distances are impressive, there is the occasion pop-in of trees or obstacles and this tends to be more noticeable when you are at top speeds. 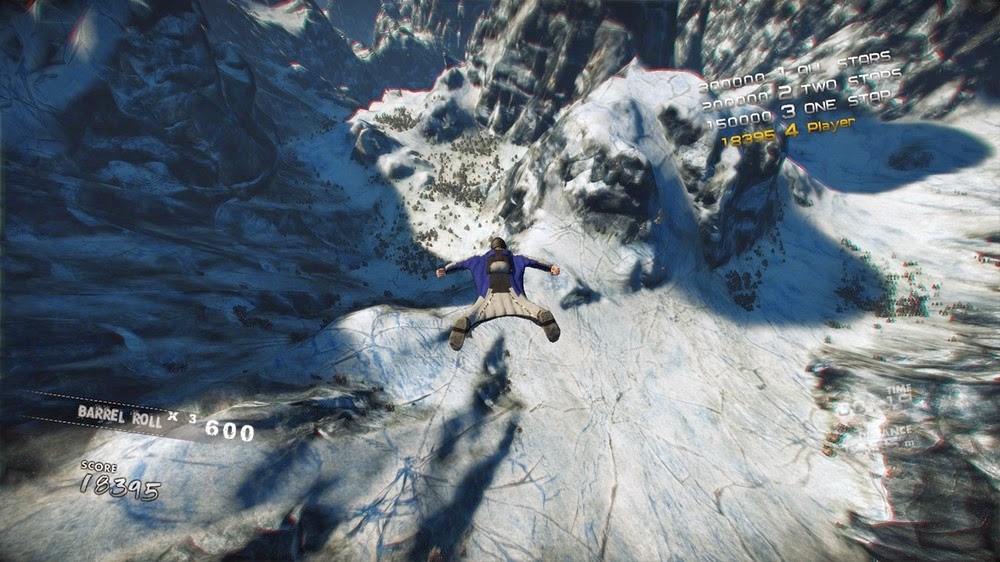 The background music is pretty decent with a good mix of hard-hitting adrenaline-filled rock or metal and the edgy, carefree tone of punk. The music is an excellent companion for your trips down these imposing mountains it never get old. However, there is listtle in the way of sound effects beyond that. This is largely due to the  constant rush of wind and the occasional flap of your bird suit. It does not detract from the game, as it is quite realistic in that essence. Just do not expect the typical sound effects heavy staples found in most other racing or X-Game style games, such as crowds, announcers and sponder advertisements. 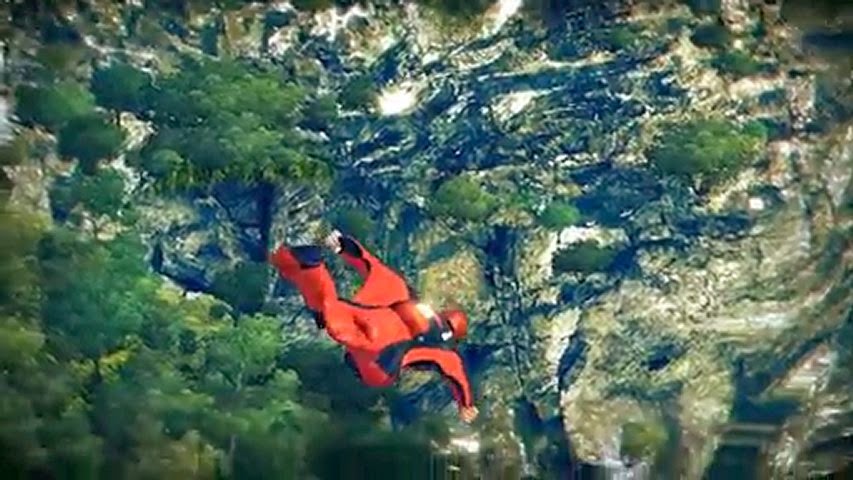 Gameplay is simply fun. It is fast, challenging, and provides a unique break away from your typical arcade racer or trick-based speed game. Add in the fact that this is about skydiving, a sport that does not get much in the way of spotlight time, and you are definitely in for an off-the-beaten-path treat. I did find however, that running Skydive: Proximity Flight on an Xbox 360 without Kinect left a little to be desired when it came to the controls. This is because the game only uses the left stick for the control and movement, so it can become extremely awkward flying with any precision. The issue is non-existent on the PlayStation 3 version of the game though, as the Six-Axis controls make flying (or falling) an easy, almost natural feeling . If you would like to see your impressions in our PS3 review, you can click here.. The significant contrast between a standard controller and a motion-based controller like the Six Axis controller is quite noticeable, but it does not break the game. The controls that are available to you without a motion controller are more than adequate, it just feels like there is less immersion with the standard controller. 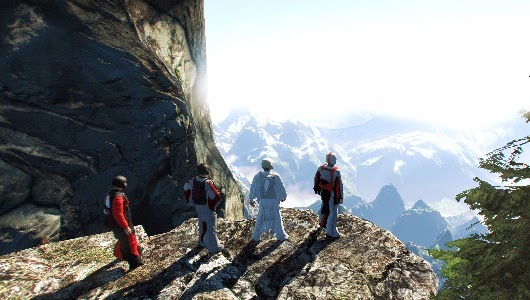 There are a number of different things to do in this game. Modes include single player challenges (which can serve as a tutorial which should greatly improve one’s skydiving skills), to different types of races. You have a Freestyle race type that lets you just get in and skydive for the joy of it. This mode is about as leisurely as you can get. You can also go through and, with an Xbox Live Gold account, check out your Friends’ challenge score and work to beat them. The final mode is fairly standard; in Adrenaline race you simply choose one of a number of riders (some require unlocking it with skills or achievements) and select the course and then try to come in first. If you succeed, you move on to the next race. The lack of a real multiplayer was a bit of a disappointment, as I would enjoy racing down the mountain against my friends. With as quick as some of the matches can be, I can envision a multiplayer component to Skydive: Proximity Flight being a pretty decent and quick party game. 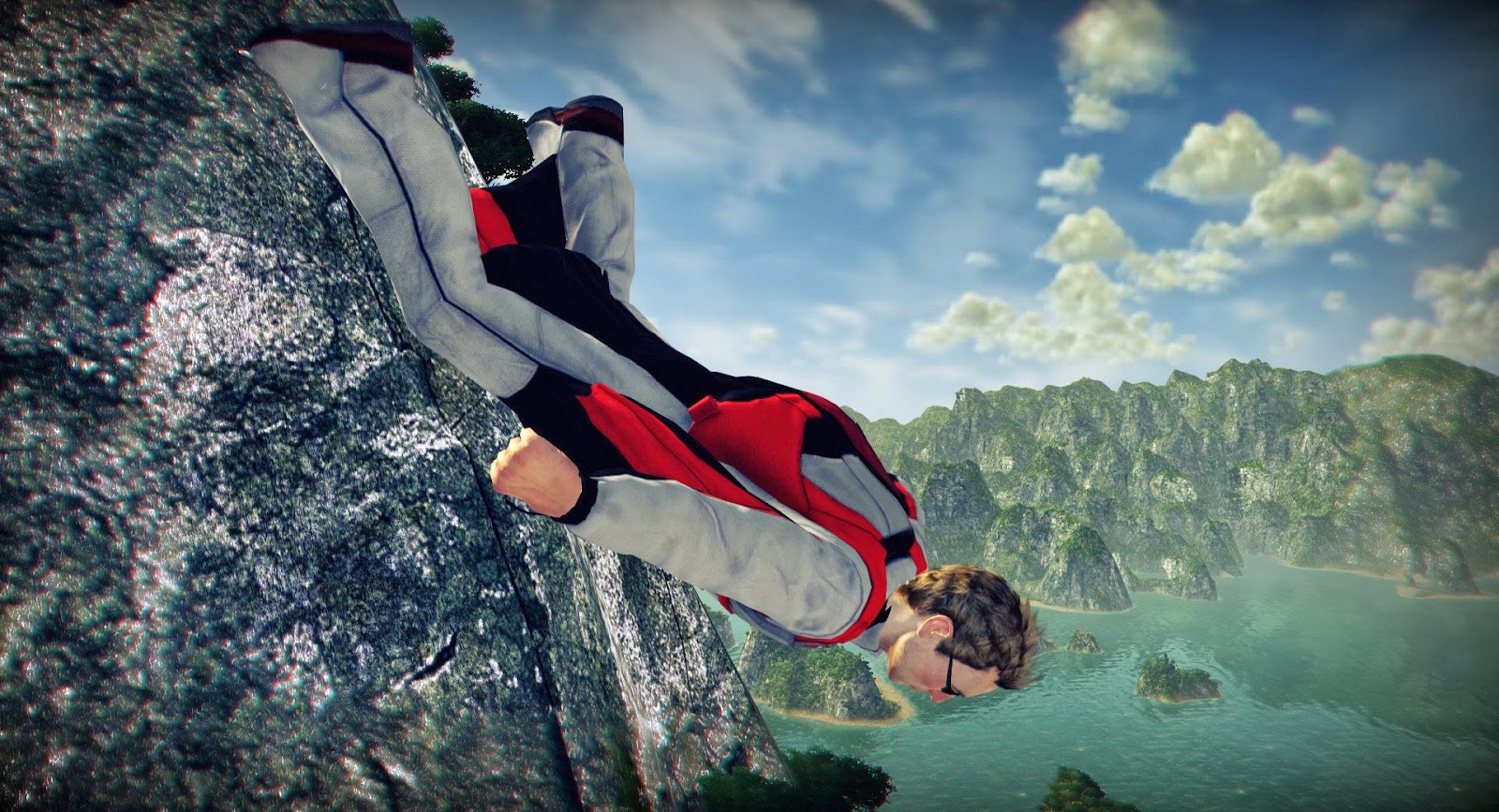 Skydive: Proximity Flight is a solid adrenaline-based game that has you hurtling through the air at breakneck speeds as you try to perform tricks and to navigate the environment. Some of my more favorite memories revolve around nearly rubbing my racer’s stomach on the base of a canyon floor or doing an insane somersault just below a bridge at tops speeds. The music that accompanies the game fits the theme of the game despite the actual sound effects being somewhat lacking. Graphical pop-in was only noticeable if you were looking for it while you were moving at top speed and the sweeping vistas are certainly pleasing to the eye. All-in-all an enjoyable arcade experience with the only real downside being the lack of multiplayer, which would have rounded the game out a bit more and added more replay value. 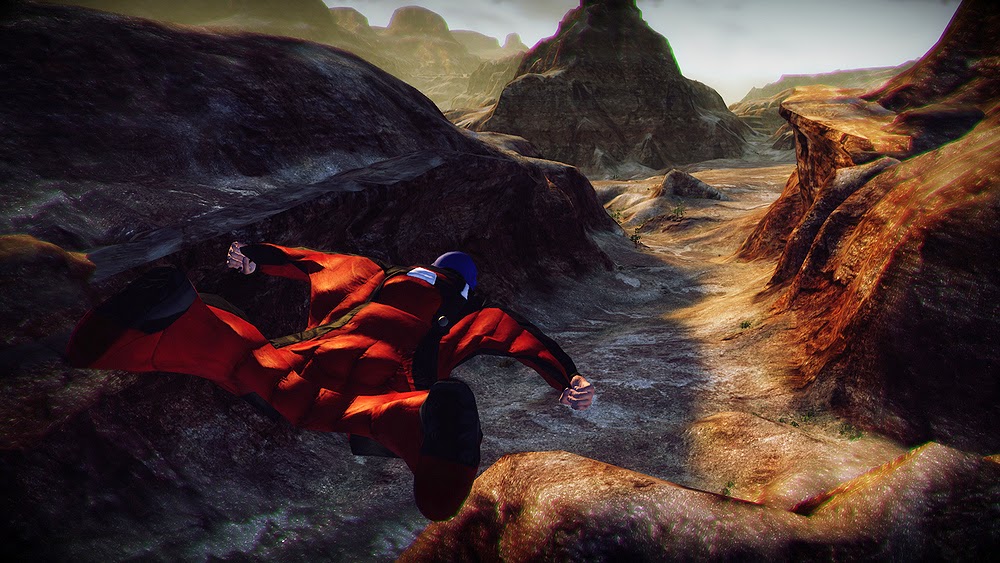