The next few months are going to be huge for this latest wave of consoles. Companies like Ubisoft argued time and again that the last console generation lasted years too long, and that it stifled the creative ability of development studios. To a lot of people, this sounded like a developer pinning excuses for under performing titles on the hardware and not themselves. After an initial wave of somewhat decent if uninspiring release titles, developers are getting their chance to put their money where their mouths were. 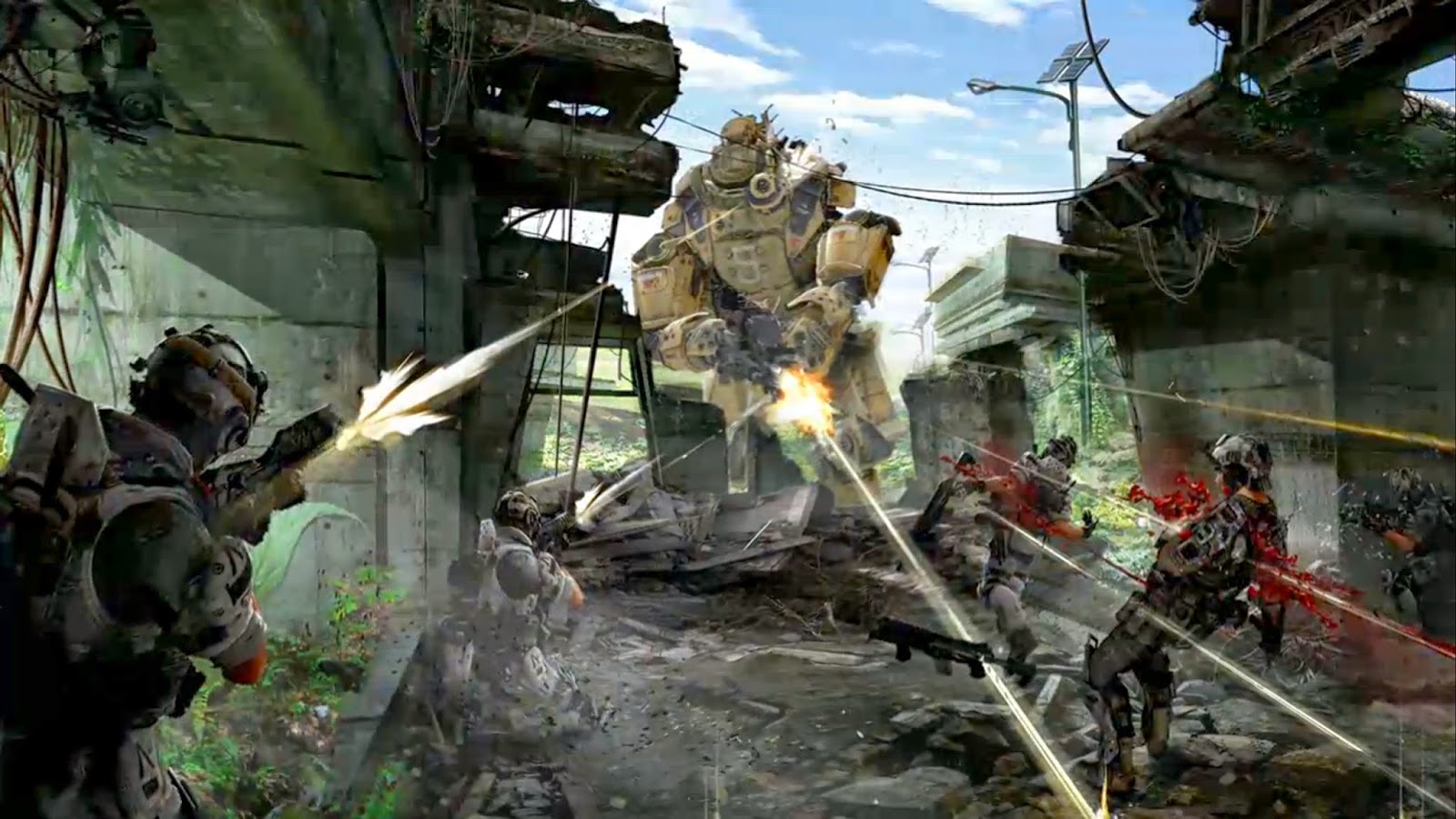 Probably no game exemplifies that more than Titanfall, Respawn Entertainment’s first person shooter with towering expectations as great as the titans gracing this title’s battlefield.

Titanfall has all the makings of a hit title. It is still being released early into the life of the Xbox One, so there is a dearth of quality titles to compete for a player’s attention. The talent and lineage is there at Respawn Entertainment, with many ties to the Call of Duty franchise. Last, but hardly least, Microsoft has been advertising the daylights out of Titfanfall, pinning a lot of its hopes that this will be the first major console selling title for their Xbox One. 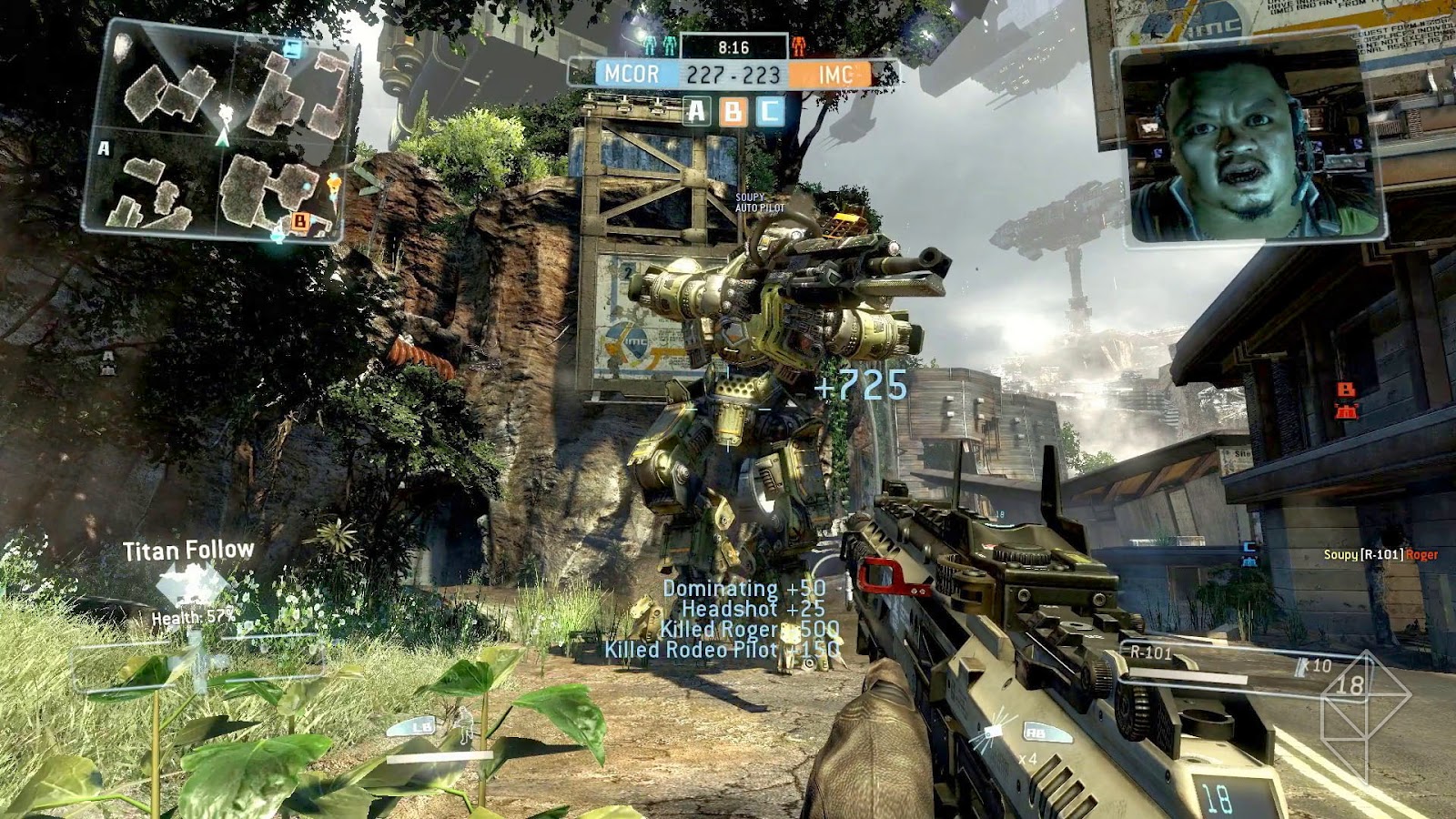 At first glance, Titanfall certainly impresses. The maps are large and have a good amount of detail to them. Players are generally fluid and the titans are technical behemoths that make an impression every time they plummet to the earth and wait for their pilot. There is a wonderful sense of futuristic design throughout that does not pop in or out or show any signs of tearing. My two nitpicks are the occasional framerate drops I have seen when the action gets insanely intense, and the fifteen maps do not really always feel terribly different from one another. I am not sure what kind of vistas would have helped this impression of mine, because it is really only just an impression, but some of my best moments in other first person shooters involve stormy or snowy weather in titles like Modern Warfare 2 – areas that felt very distinctive from the rest. Titanfall have few areas that made such an impression. 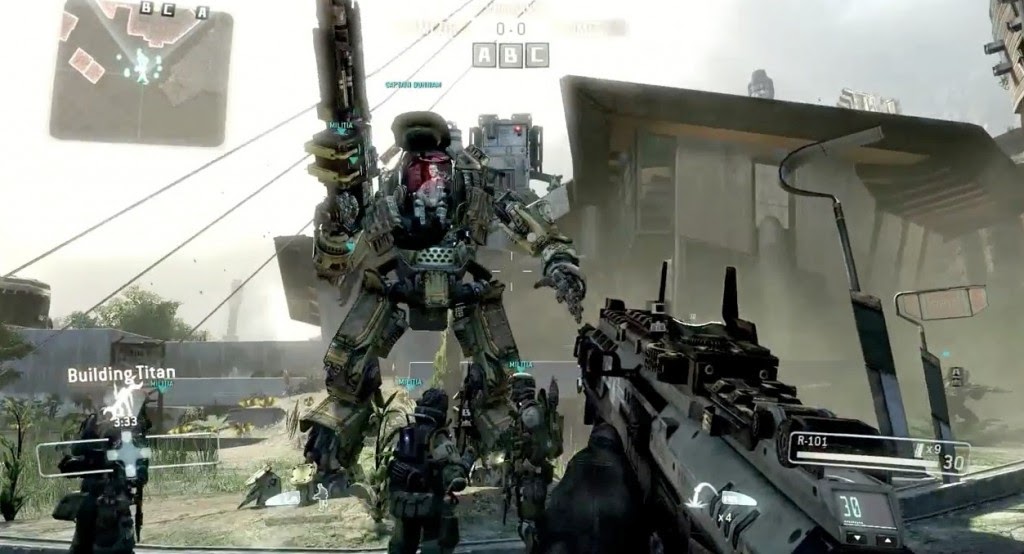 A powerful sweeping score sets the backdrop for the action, but it is the nuts and bolts of the sound design that really had me excited. Hooked up to my surround sound system in the living room, the use of directional sound is outstanding and very useful during combat. There are a wide range of guns and explosions at your disposal, and they do create a nice ‘chaos of war’ feeling, but subtler sounds carry through as well. One of the burn cards called Spider Sense lets off a faint ping that warns you when an enemy player is nearby.

On top of that, similar to Call of Duty, there is a voice narrating the action to a degree. This voice lets you know how the battle is going, but also can impart other relevant information like in Hardpoint he will tell you to be careful of enemy troops as you are now getting close to the destination marker. You also get useful updates such as when your titan will be ready. With so much happening, there was the potential to make a complete mess out of the audio, but instead the key points of information do an excellent job of rising above the din of combat. 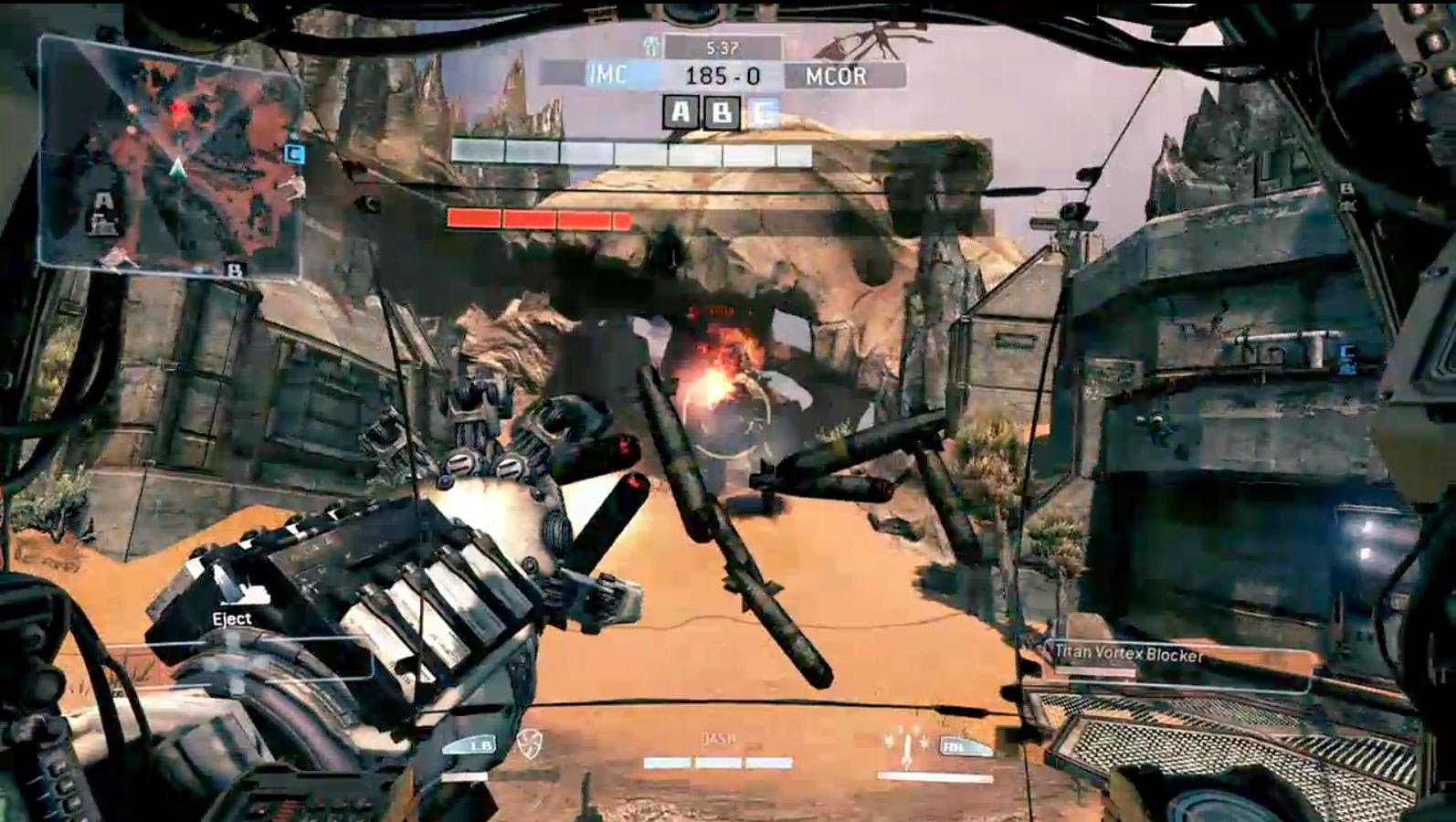 Combat mechanics are very finely honed. Firing is easy and responsive, but you expect that from a shooter like this. What I did not expect was the parkour style of movement with your pilots. The speed and fluidness of running along the walls or double jumping onto a distant roof have a Mirror’s Edge like feel that makes you feel almost as deadly on foot as you do in one of the towering titans. Additional little gameplay tweaks like hanging onto the side of a wall for a short time really add some interesting elements to the game’s strategy. I love taking a Hardpoint location and seeing enemies coming on my map, prompting me to run up to a nearby wall, cling to it and wait to take them out from my unusual position.

The mechanical titans feel appropriately beefy but slow and bulky as well by comparison. They are towers of fire power that can trample a pilot or blow up several spectres with a single missile – but they are far from invincible either. Anti titan weapons like lock on missile launchers help to even the playing field, and it is a blast to jump onto a mech from above and ‘rodeo’ it, firing off precision shots to weak points on that titan.

It was a controversial decision to have 6 player vs 6 player battles fleshed out by additional AI bots that roam the battlefield. These bots are generally easy kills, but they do make the battlefield feel more alive. I know there has been conversation about why limiting it to six people per side, but I think given the nature of the titans themselves, it makes a lot of sense. Some gamers complain that maybe the titans should have been treated as much rarer kill streak type bonuses like you would see in Call of Duty, but I actually favor this design choice, because everyone gets to enjoy the titans and explore all the gameplay aspects. 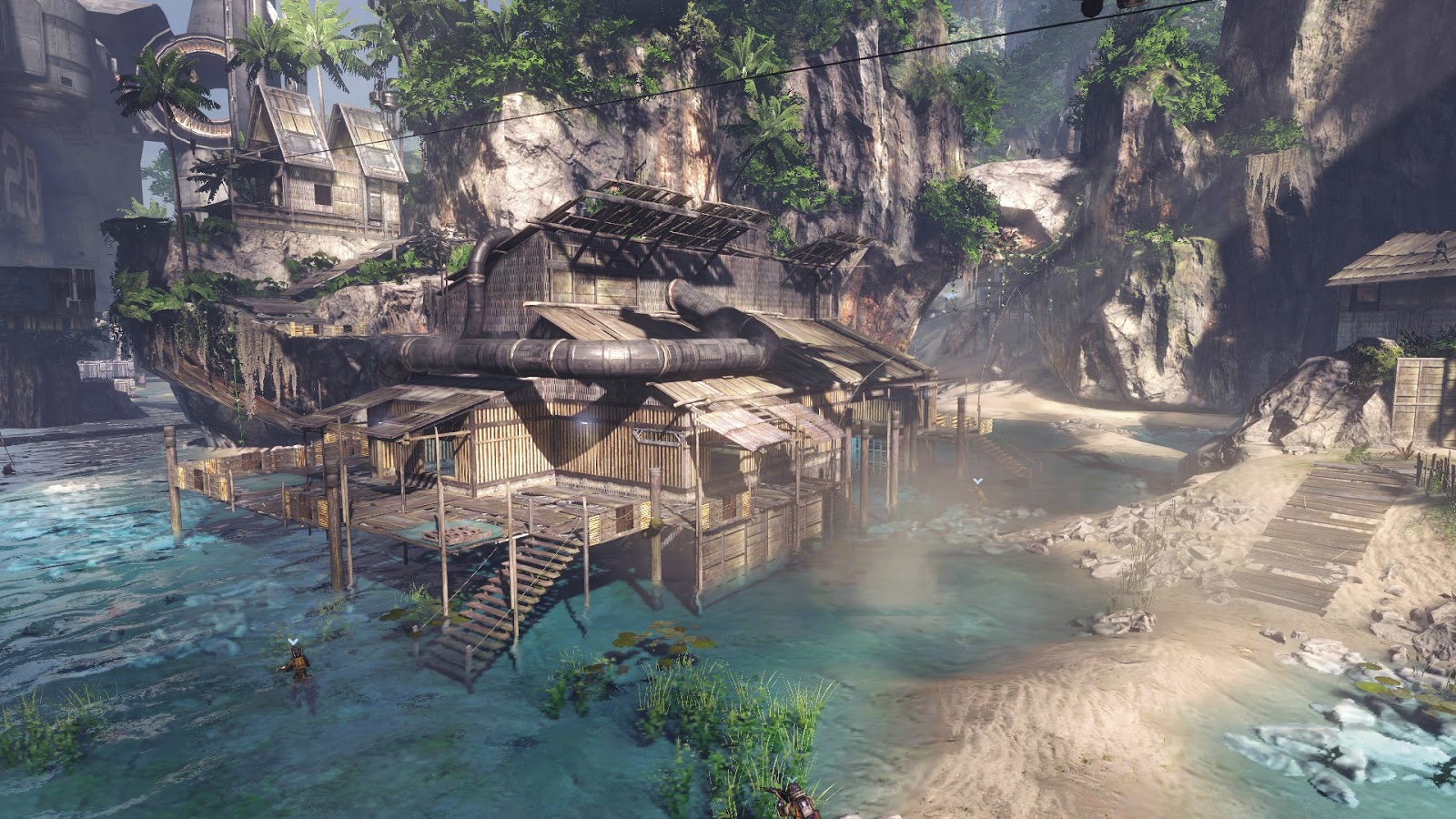 Here Titanfall does stumble a bit. I have been having an absolute blast playing it, but a little repetition is already starting to settle in. The two biggest problems is that there is no single player mode – which could be frustrating should these servers ever be down for maintenance or something. Additionally, there are only five game modes right now, and two of them are pretty similar.

There is a campaign mode, but it is all online. There are two sides to this war, and you can play through about a dozen scenarios on one side to unlock a new type of titan body. You can play through the campaign mode a second time for the other side to unlock the third type of base titan. It still boils down to a series of multiplayer maps that are either Attrition or Hardpoint game modes. I found it a little strange that the other three game modes never made an appearance. It is a nice way to try and tell some story at least.

Thankfully the fifteen maps are all very well designed, and there seems to be a good deal of balance so far between the titan and pilot loadouts. There are some nice leveling hooks in there as you continue to play, unlocking new weapons and some basic modifications to the weapons. It lacks the level of customization that you tend to see in some other shooters now and your appearance is really fairly generic as well – based on class.

The burn cards are an interesting twist. You can earn these through playing the game, and they are in game perks you can carry in (up to a maximum of three per battle). They are generally pretty powerful, but they have a one time use. The next time you die, or if the battle ends, your burn card is gone. These range from modified and more powerful versions of weapons, to improved speed or enemy detection, to faster titan creation times or experience bonuses. 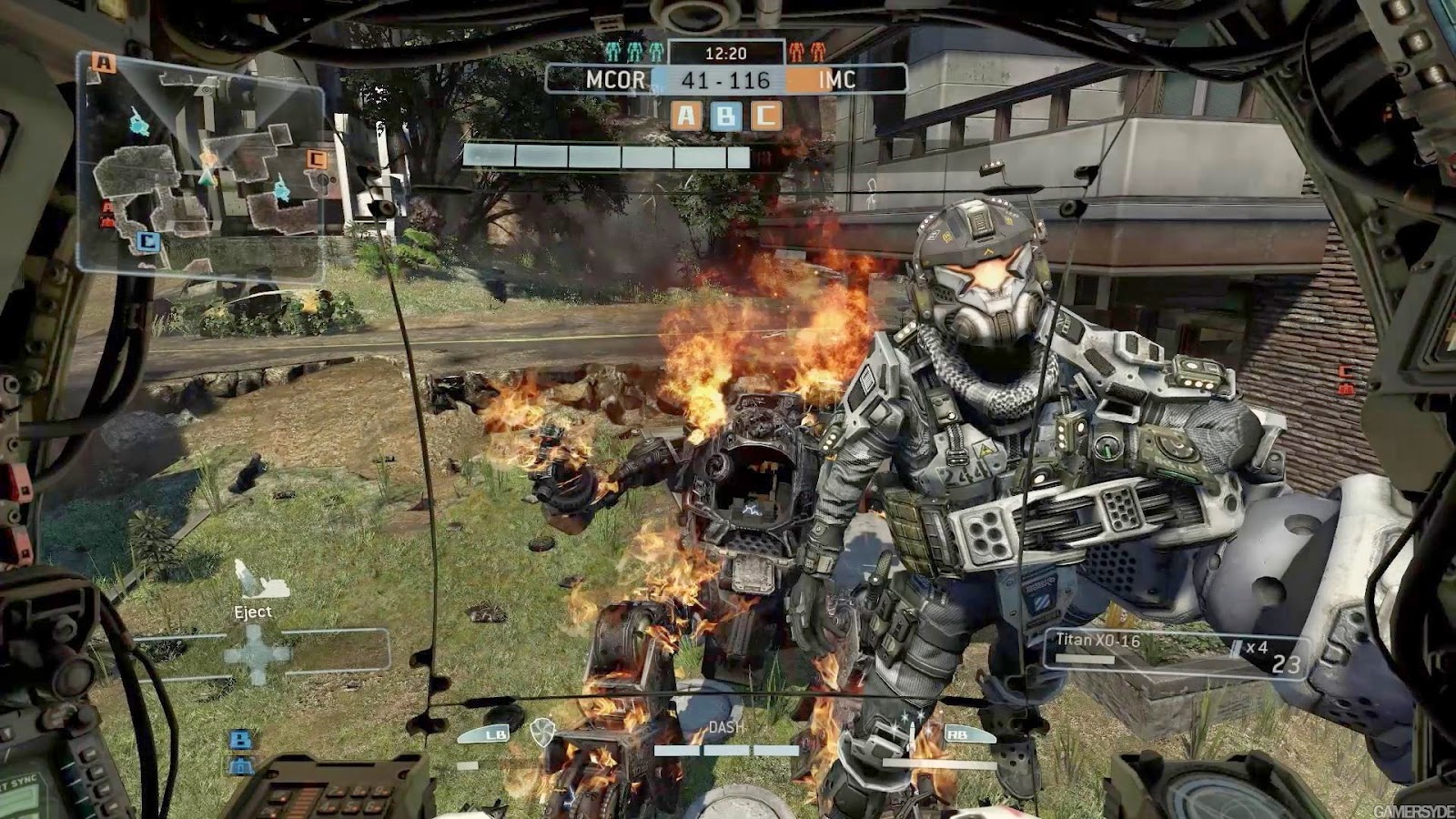 Something to consider before you plunk down good hard money on Titanfall: despite being the biggest name on the Xbox One, it is definitely meant to appeal to a specific type of market. If you do not enjoy first person shooting games, this is not going to be the title to convince you otherwise. My best example is how I wound up playing with two of my old high school buddies on the second night. One of them is a huge science fiction/mech fan, and he is eating this game right up with no signs of slowing down. The other is a hugely competitive guy who gets entirely too riled up playing FPS. He has damaged controllers and more in fits of rage.

The first friend has been playing nightly, the second traded it in to Gamestop on day three, because he was still so frustrated with it.

If you are someone who can get a lot of mileage out of an online shooter, you will probably find a good deal to like here. Another case study: a friend of mine at work loves his FPS games, but he does not even bother with the story modes. He buys every CoD the day it releases, and has not done the single player campaign since Modern Warfare 2. He is the primary audience for this game and he is absolutely loving it.

Many times people complain that FPS titles bring nothing new to the table. Titanfall does an excellent job of feeling both familiar and fresh at the same time. The towering mechs add an entirely new layer to the gameplay, as do the parkour and burn card elements. If Titanfall had come with just a bit more variety out of the box, it might have had a longer lasting appeal however.

Is this the ‘killer app’ the Xbox One needed? Probably. There is still a huge market for FPS games, and Titanfall fills that particular need. It is not going to appeal to everyone, but there is certainly an audience that has been waiting for this – and by and large Titanfall has delivered for them. 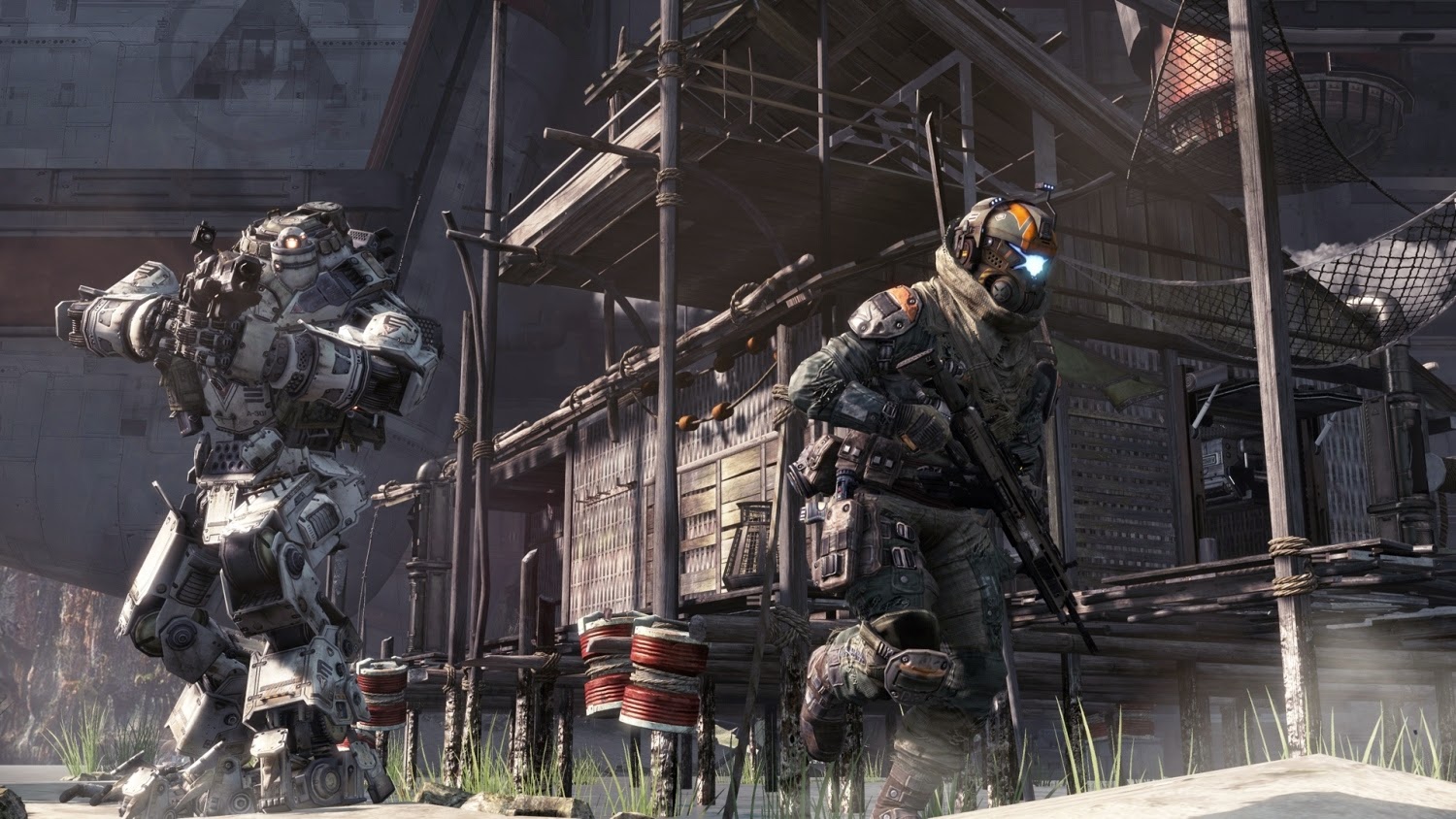