Yaiba: Ninja Gaiden Z is not the Ninja Gaiden game you have grown used to over the last few years. It uses an anime style of art and over-the-top irreverent humor to tell the tale of not Ryu, but a different, far more crass ninja named Yaiba. Yaiba is a foul-mouthed protagonist with a mechanical arm and a tendency for flare and destruction over stealth and subtlety. 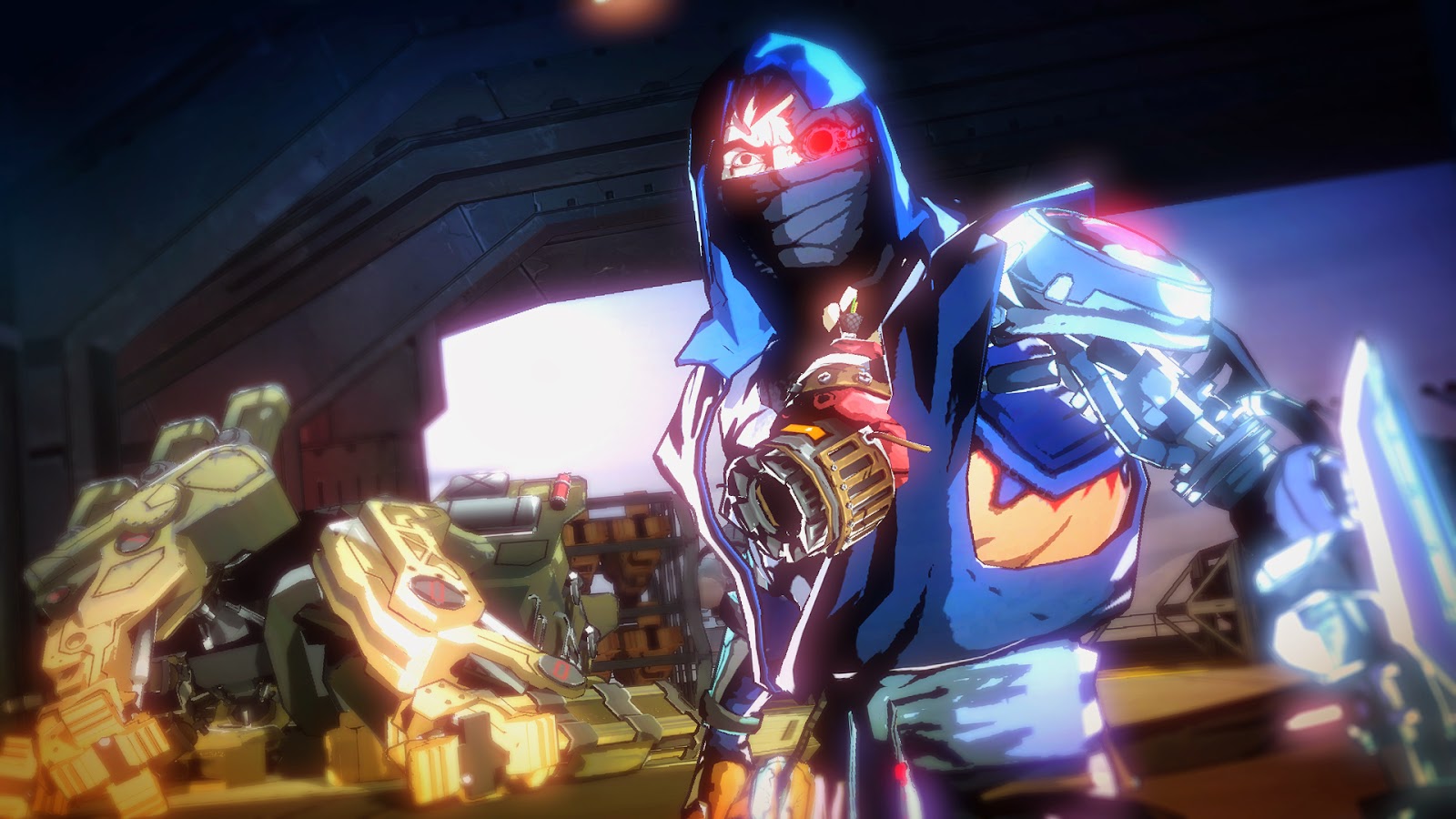 In fact, Yaiba is on a mission to find revenge on Ryu no matter the cost. It was in a battle shown at the game’s beginning, where Ryu costs Yaiba his arm, an eye and nearly his life. All three are restored mechanically, turning Yaiba into a cyborg killing machine with the skills of a ninja and the mind of sociopath. 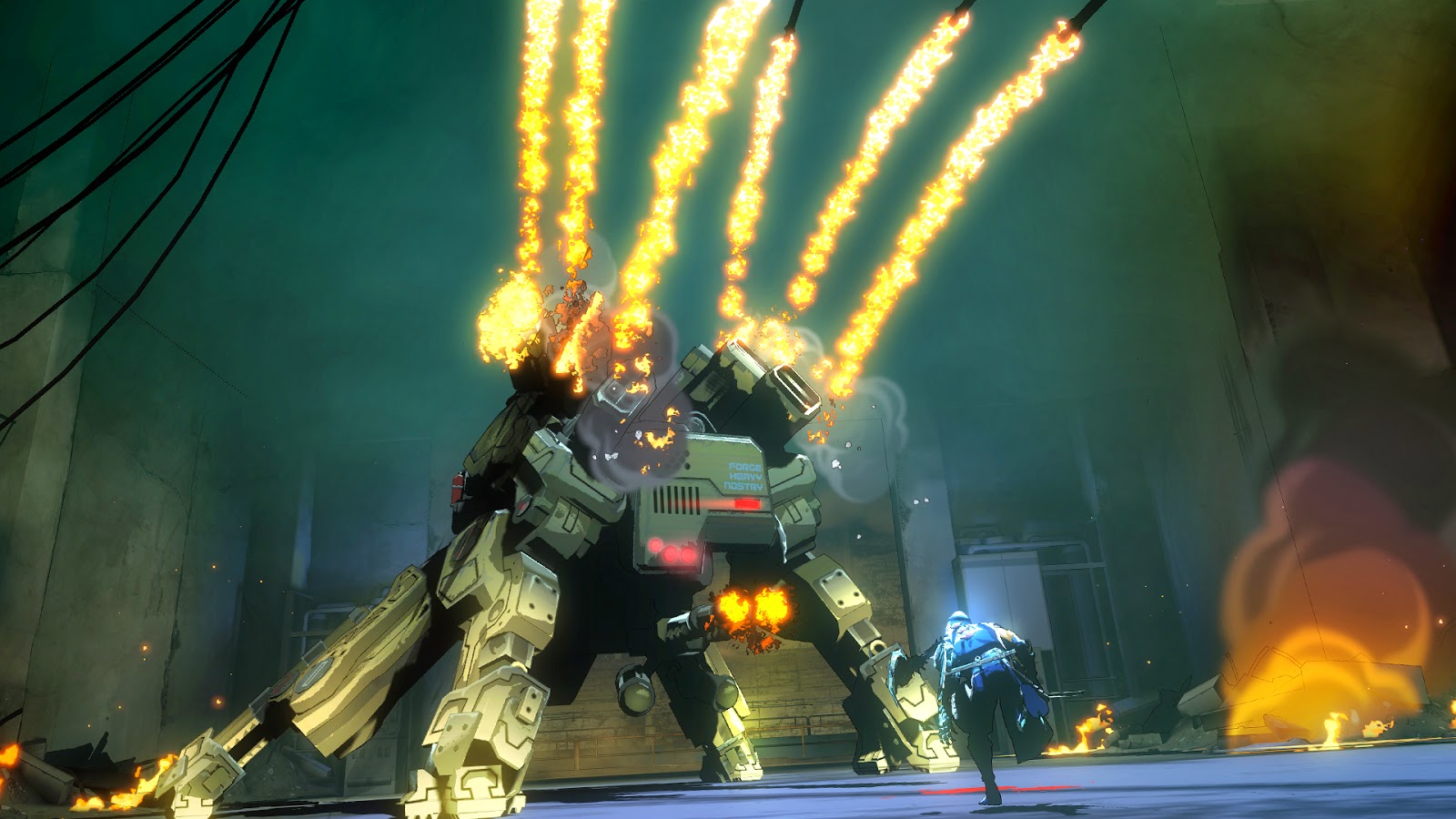 From the moment the opening movie start I was thrilled; it was like watching a well drawn anime and the feeling didn’t subside once throughout the game. The cell-shaded appearance, the details – from grenadier belts to Yaiba’s cyborg arm – were plentiful and at 1920×1080 the game was fluid, showing no hiccups on my gaming laptop. The choice of colors (a lot of reds/purples with yellow throughout) was a treat to the eye. I did run into a number of invisible walls, which was a bit disappointing. After all I was playing a cyborg ninja-killing ninja and I wanted to go everywhere that I could. Do not however, look at this as the game was in some way broken – it is just something of a personal preference. Outside of the invisible walls and a few times seeing enemies just disappear (without me squishing them) the game’s look is certainly unique. The cut scenes that fill out the story of the game are straight out of a comic book; when I saw the first one (and every scene after) I could not help but feel like I was watching a Frank Miller graphic novel or an early Garth Ennis Punisher comic come to life on screen. Needless to say, my inner fanboy was jumping gleefully. 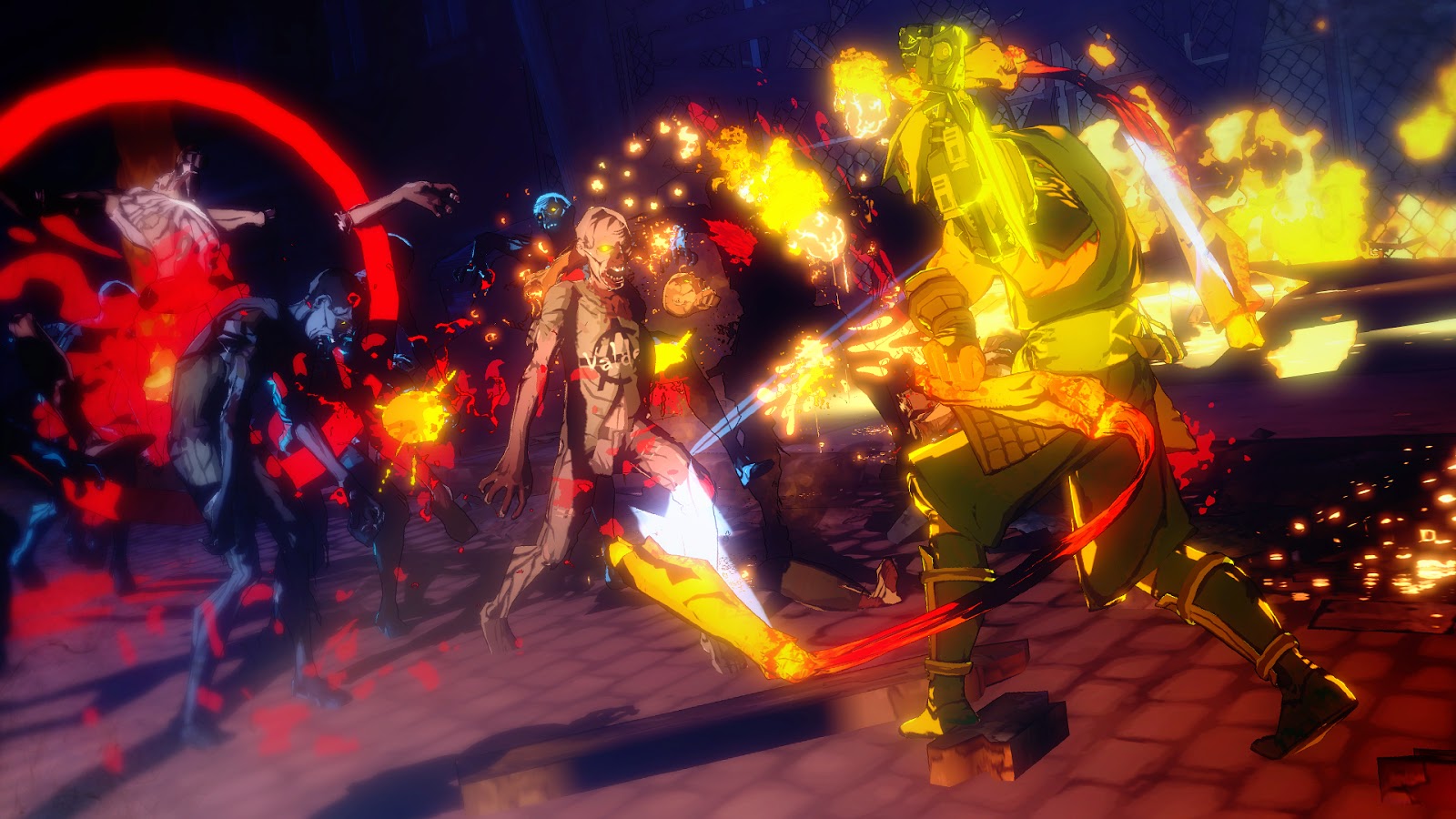 I ran into a few points where the audio was filled with bits of popping and static on the highs during a number of the cut scenes. Initially I thought it might be my laptop speaker, so I plugged in my good speakers and the popping was still evident throughout some of the scenes. During gameplay though, there was very little of this distortion, though it was very difficult to hear some of the quips, ambient sounds, or narration that the other characters in the game would provide. The background music was so fitting and designed for this type of game that I find myself replaying the music in my head, even when driving. It is best described as good, fast and hard – hitting like a ton of bricks that matches the gameplay’s impact. With the background music so well done though, it drowns out the explosive “maximum damage” calls and the less-than-satisfying squelching of your fist smashing into some of the ample infected that try to swarm you. Even turning the music down, the sound effects seemed muted and not as defined as one might like. 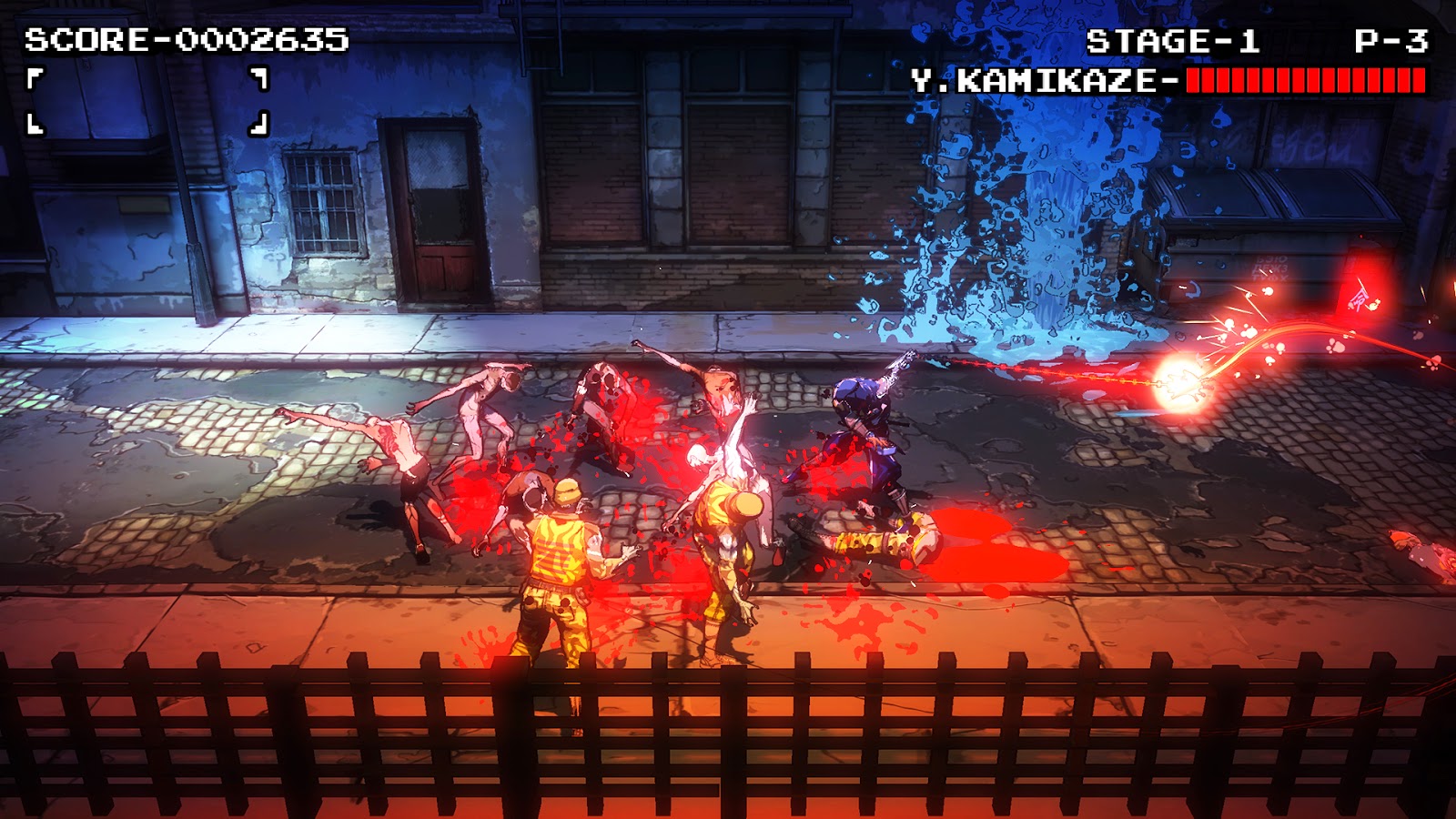 I had so much fun with the core gameplay here that the one massive shortcoming that it has, the lack of camera control is forgivable. It is unfortunate however, because being able to control the camera would have been incredibly handy. For example, if you get turned about while battling dozens of zombified Russians, you can be in for a frustrating time. Yaiba: Ninja Gaiden Z is without a doubt an adult brawler that wears its heart on its sleeve. It is not attempting to be a serious and deep game, it is trying to be a slugfest with guts, comically inappropriate innuendos and plenty of button-mashing action and it succeeds wholeheartedly in this endeavor. The only times I was not smiling or laughing like a kid-in-a-candy-store was when I was accidentally turned all about and couldn’t find the “right way” due to the lack of camera control.

When I first started up Yaiba: Ninja Gaiden Z I had my gamepad plugged in and once the main menu popped up it stated “Press Start” and I giggled with glee. I cannot help but be pleased with a development team when they build controller support right into the game at launch. Movements were crisp and responsive, whether it was keyboard or gamepad, and the attack buttons more than adequately provided a flurry of blows in an uncomplicated manner. On the other hand, this game is a pure button-mashing brawler; spam the keys/buttons as fast as you can and point in the general direction of something squishy and you are generally good to go. 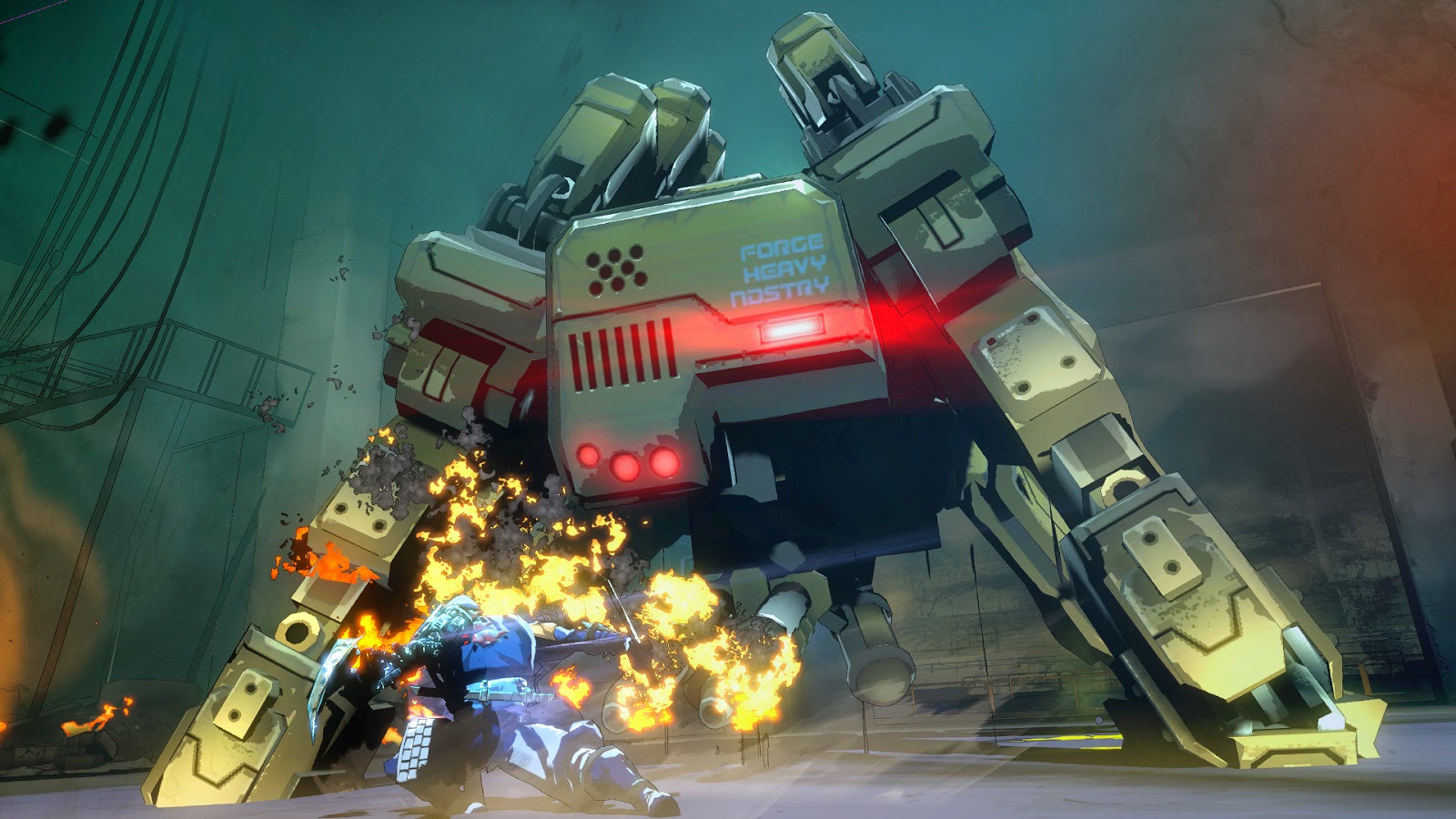 There is not much in the way of extras throughout the game. You can find some collectibles throughout the levels, though the levels are not large and most of the times it is pretty easy to grab the majority of them. Occasionally one trophy might be in a difficult-to-reach location but a second or third try will succeed and yield the reward. One very neat extra was the perk tree – think of it as a talent system. There are some interesting perks that can impact a variety of things. Eight or nine hit combo additions? Check. Flame thrower perk? Got that too. You wanted a rocket launcher? Here you go. All of these over-the-top items help to make for some hilarious action scenes. 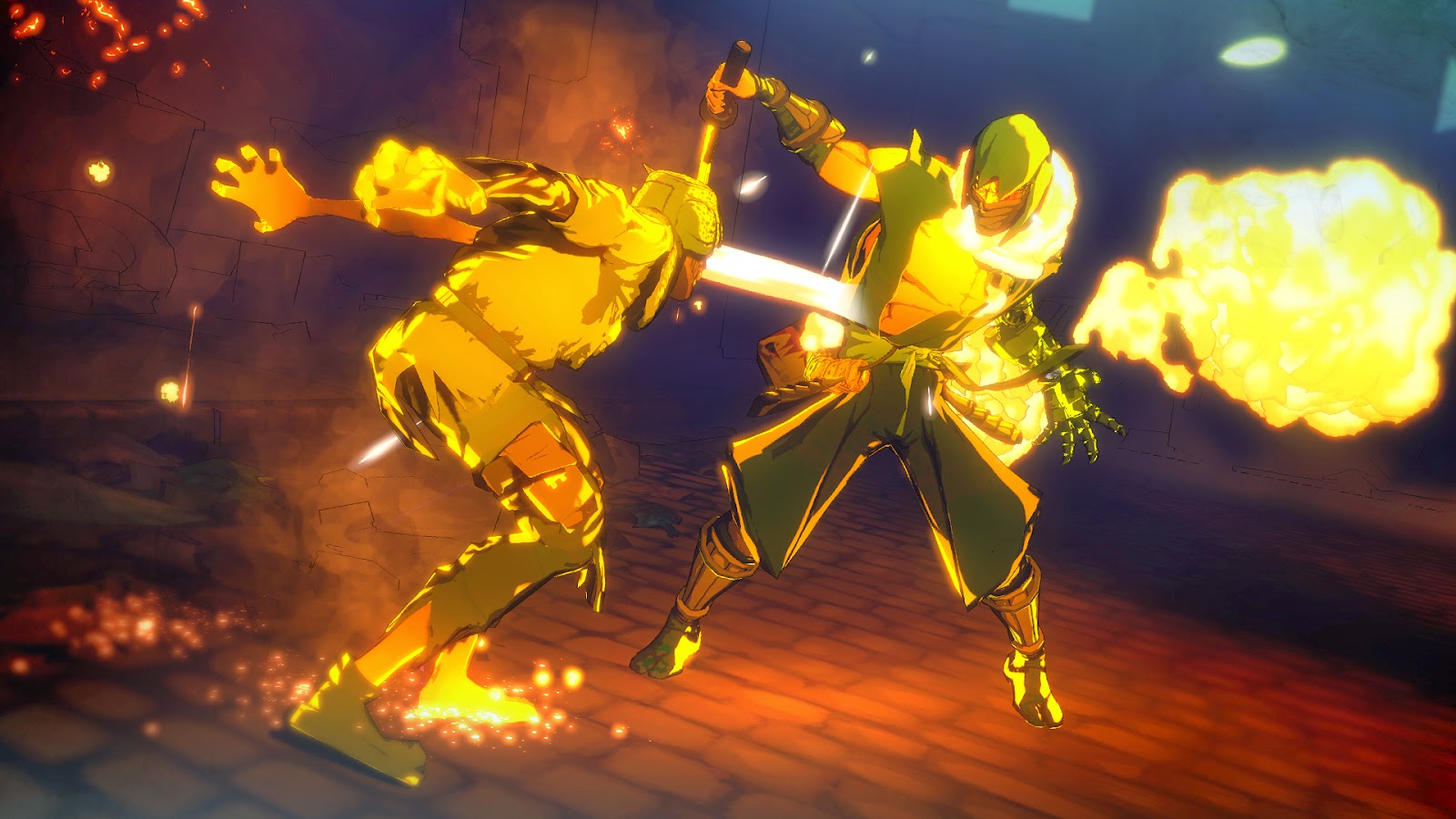 I enjoyed this game for a variety of reasons: the art style, the over-the-top action and the hilarious content to name a few. It was pure, maniacal fun. Admittedly, there faults with the game. These would primarily be the lack of camera control, periodic monster disappearance and the lack of robust audio. Also, it is not appropriate for all audiences as the definite adult nature of the game may be off-putting to some potential gamers. Longtime Ninja Gaiden loyalists may not like the departure from the series, but anyone that wants a good brawler makes this an easy party to recommend this too.

I cannot help but admire the developers here, as they took a long-running and beloved franchise and chose to take some chances and shake things up a great deal. What was most surprising is that while it is such a departure, I was struck at times with some pretty hefty nostalgia from the days of playing the original Ninja Gaiden on the NES back in the early 90’s. Yes, this is a notable departure from the core games, but one well worth the eight or so hours it will take to get through a title that excels in being intentionally over the top in everything it does.