NIS America’s trend of bringing strong if niche titles to the US continues with Demon Gaze. For fans of the Wizardry or Etrian series, you should feel right at home here crawling through dungeons, grinding out levels and finding new loot to either put to use or sell. The experience could prove more daunting however, if you are not familiar with first-person RPG titles. 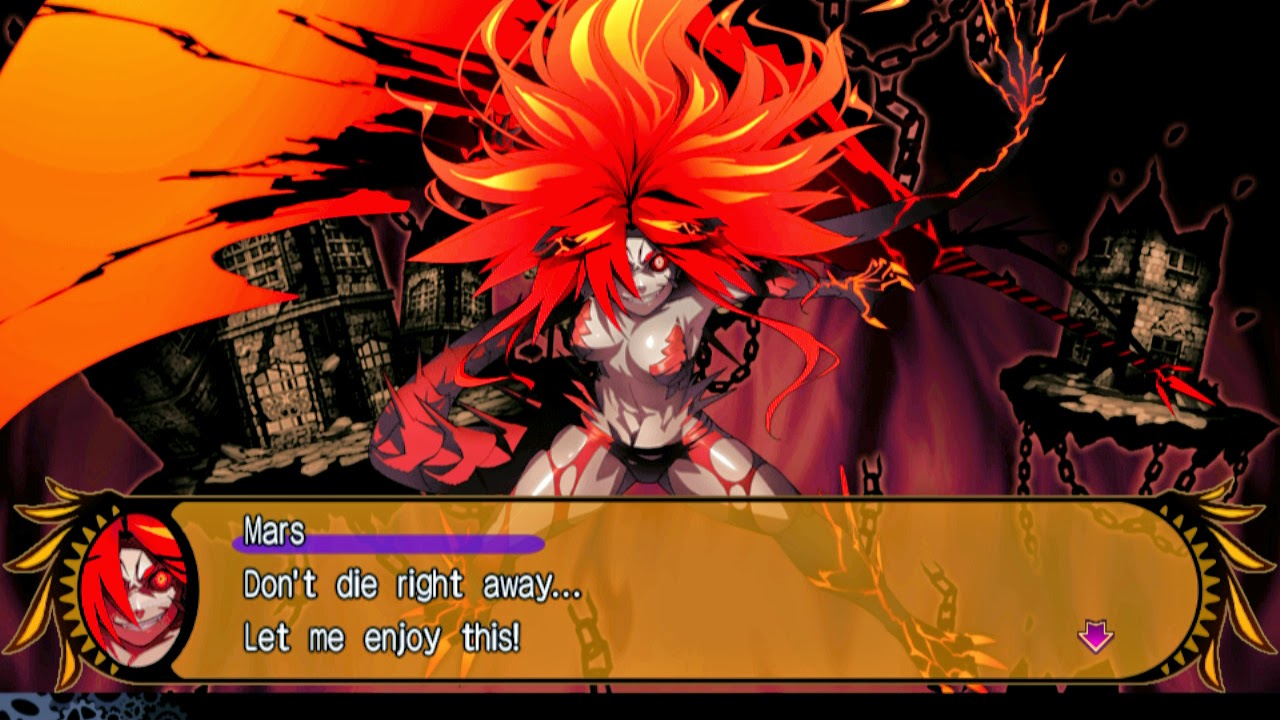 The events start off simple enough, and familiar enough as well. Your protagonist wakes up with amnesia and is trying to make his way through a dungeon that has a single demon waiting near its end. The twist comes when you are able to capture this demon and later use her to support you in battle. While Demon Gaze does not go out of its way to hold your hand (in fact, it is a rather difficult game, even if you find and lower the difficulty all of the way), new elements are taught at a slow enough pace that I never felt overwhelmed by new mechanics or information.

The story starts out rather confusing, but that makes sense since your own character’s history is shrouded in mystery. As you progress things begin to make much sense and the sense of discovery – both in physically exploring dungeons and revealing more of the story – is quite satisfying. This is helped along by a very colorful cast of supporting characters that occupy the inn that your protagonist is staying at. This inn serves as a central hub, much like a city would in older Wizardry games. You can acquire new members for your team as well here – at a cost.

The world feels a bit small at first, with dungeons that do not seem all that large and with a limited number of party members available to you. The way Demon Gaze expands however, is beautifully managed as it continues to push you to explore while never overwhelming with too many options. Grab quests, pick up new loot and continue to kill creatures as your party levels up and your captured demons become more powerful. It is not a revolutionary formula, but all its parts are wonderfully balanced. 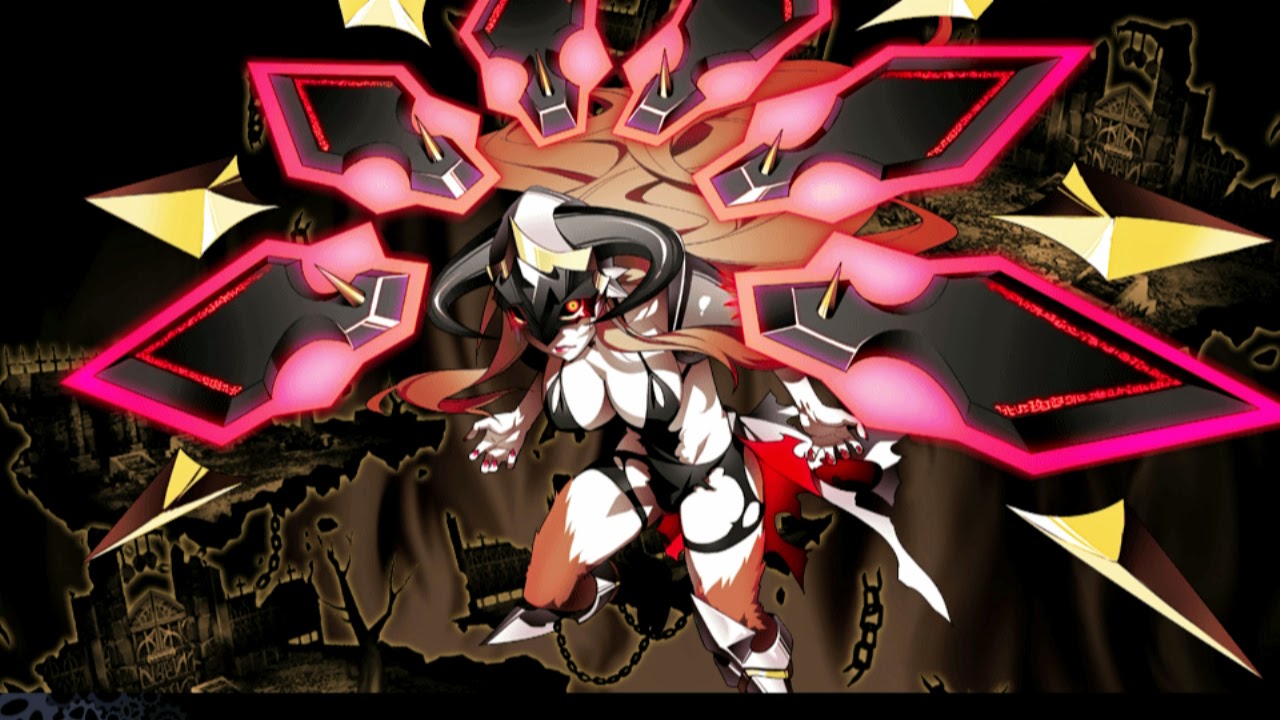 On a technical level, Demon Gaze does nothing wrong – it simply does not do anything to push the Vita’s very capable hardware either. So much of the game is displayed in a fairly static way that things like texture pop-in or tearing is of course not going to occur. Enemies show excellent detail, but very little movement. The first person perspective in RPG titles has seldom been beautiful, but I think that Demon Gaze is more visually appealing than most. There is good variety in the tiles as you have to navigate around traps/dangerous floor terrain, find locked or hidden doors and move around from one area to another. Many of the areas have more distinctive sub-zones and they are visually appropriate as well.

Probably the most controversial aspect of the visuals has less to do with the game’s technical merits, but the scantily clad nature of the majority of the females in the game. Many of them are as near-to-nude as you can be and could very well cause a person to blush should you be interacting with them in a public space. The character art is all quite good, but it is clear that many of the females are being presented in a very particular way. The mortician for example, is initially presented as simply a woman in underwear. Given that this sort of presentation of women in anime art as well as how demons are perceived is quite different in Japan than it is here in the United States, these things could unfortunately narrow the audience for Demon Gaze somewhat. 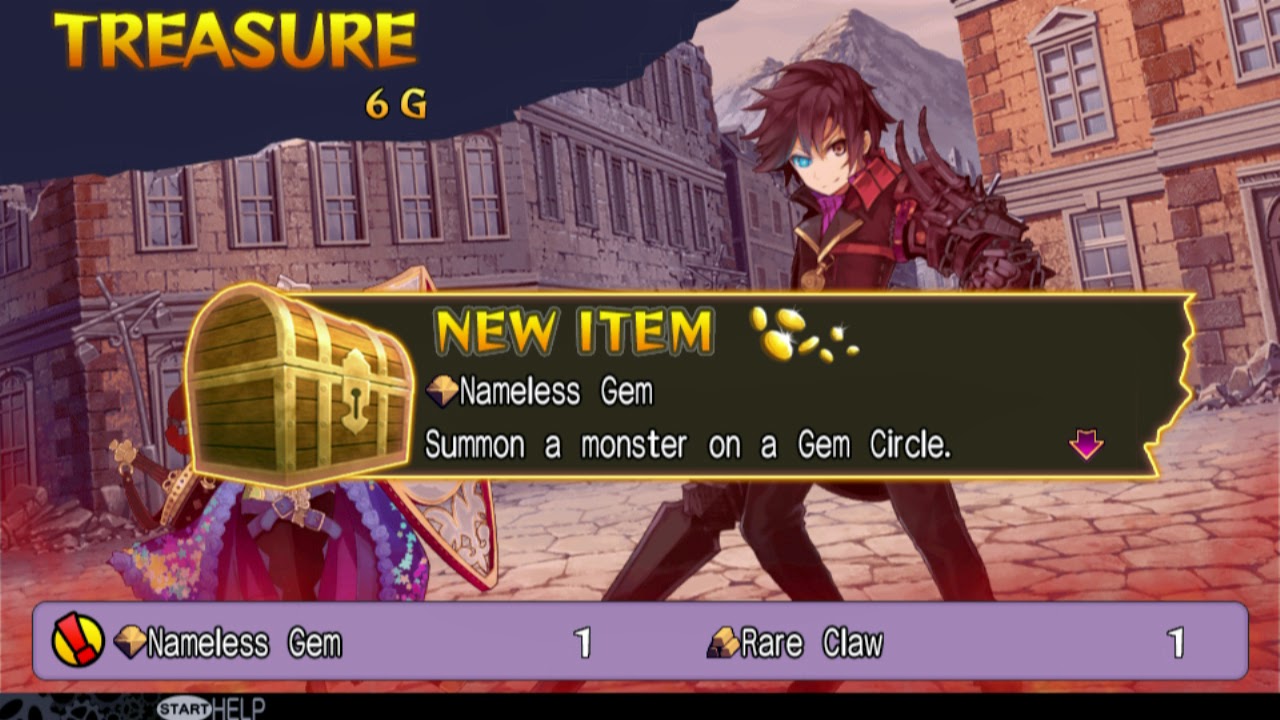 There is plenty of voice acting to be found here, which is never a small task with a localization effort like this. The cast ranges from good to adequate, but no really poor voice actors immediately stood out to me. They were all perfectly serviceable and helped to present the story – and many of its quirky characters – in entertaining fashion. The sound effects and music also hold up their end of the bargain, with a good if not great soundtrack. The music is all very much fitting with the game’s setting, and while none of the tunes in particular struck me as overly memorable, thankfully none were offensive to the ears either. Games like this tend to get far too repetitive with their music and sound effects, but I never once considered turning down my Vita’s volume. 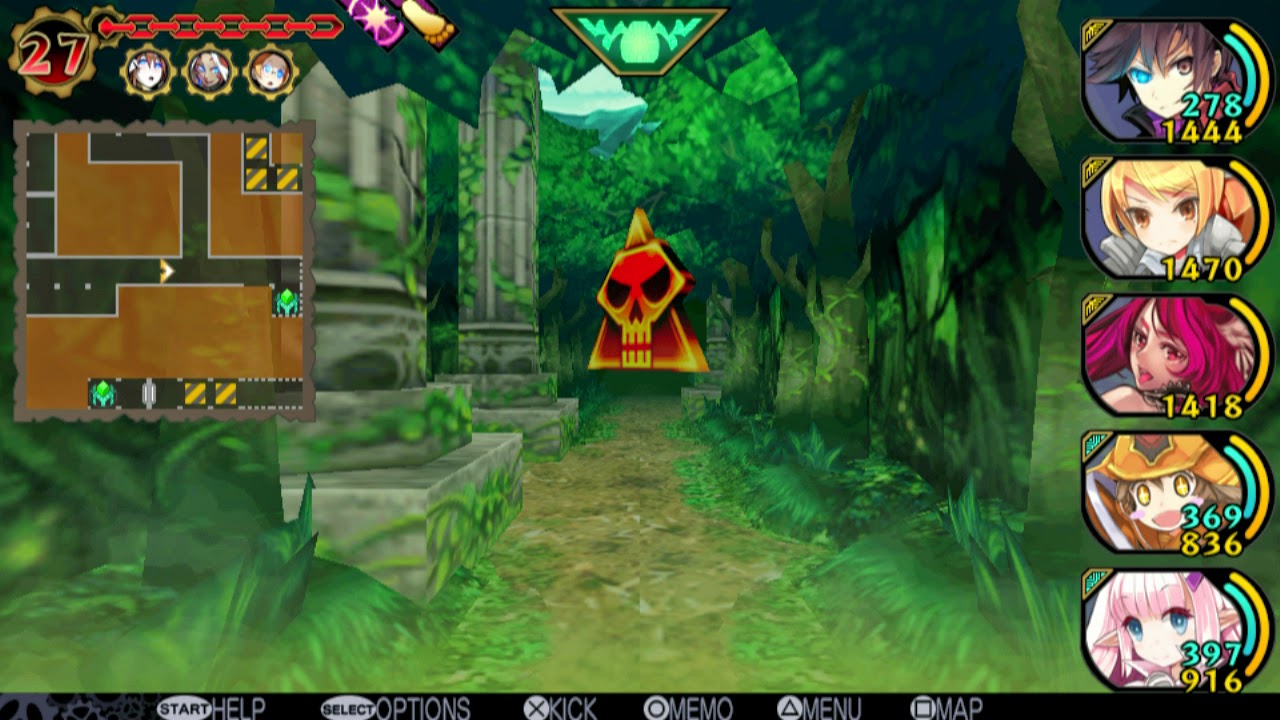 Honestly this is about as good as it gets for a dungeon crawling RPG. There are a lot of menus, but they were never confusing nor difficult to navigate. Of course a newcomer to this type of game might find the plentiful menus a bit daunting, but I have enough experience with the genre that I immediately felt right at home and was able to interact with everything I needed with no trouble at all. Movement is a simple step-by-step affair, though there is a fast travel option from the map screne that is pretty amazing. Choose your destination on said map, and barring any large obstacles (and assuming you have already trekked to and from said location in the past), your party will advance along the quickest route possible automatically. Very handy if you are venturing into an area for the third or fourth time and know exactly where you want to go.

Combat is a turn-based affair where you input all of your party’s commands up front, and then they play out in order of character speed – at the same time as your opponent’s. The addition of the demons is interesting, because while you can dictate commands to your parties, the demons act as a sort of wildcard. They do what they want, and they are only active for so many rounds before they become enraged versions of themselves. The good news it – their enraged selves are more powerful. The bad news is they may hit you or your enemy – you have no control over them.

There is no reinvention of the wheel taking place here, but the combat, movement and menu navigation are all best-in-class examples of how the dungeon crawling genre should work. 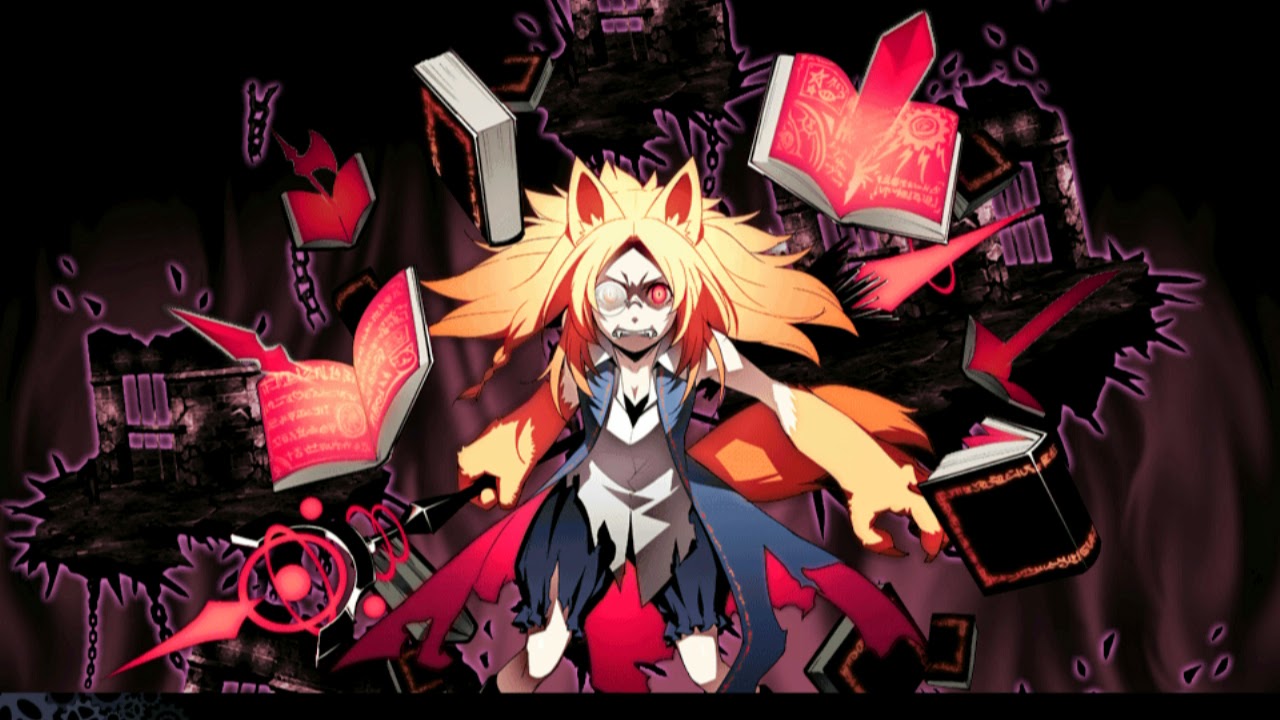 There is a good deal of content here, and the game simply gets better as you play it. The story becomes less challenging to make sense of, the characters generally are more interesting and grinding for experience and skills is something that has always suited me just fine. One really nifty feature is the messaging system you can use to interact with other players walking through a zone. It is very reminiscent to the system found in the Demon’s/Dark Souls games. It is a neat feature to see added to a game that is by definition a very single-player experience, but still makes you feel like you are part of a larger overall community at the same time. Of course, some of the memos are more helpful than others, but I thought it was a clever addition.

One of the more odd notions is that when creating a character, you can choose to be male or female and select from any number of character graphics to represent yourself. The story is still told as though you are a male protagonist. I just found that an odd design choice to make it seem like you have some say in the matter there, but you really do not. In fact, that sort of illusion occurs quite a few times as there are frequently dialog options that pop up, but so far as I can tell they almost never have any sort of impact on the game outside of that one particular moment in time.

Each zone has a circle in it, which is a preset fight. These locations are interesting for multiple reasons. For one, you know there will be a combat encounter. There are other points on the map with an icon where you know a fight will ensue, and like those you know you should prepare first. There are still random encounters while walking about, but they are far less prevalent than many other dungeon crawling RPGs, so these additional combat points are a nice bit of variety.

The circles also encourage you to put special stones on them. By doing so and winning the fight, you can get items of a specific type. These are useful – either for wearing or just selling for good money back at the inn. This loot system is actually both creative and somewhat addicting, especially if you were saving up some rarer stones. Once you claim the circle as your own, you can save there as well. This is a huge boon, because one initial concern I had was that dungeon crawlers generally do not lend themselves to the handheld format. The turn-based combat does, but in many RPGs such as this, you can spend really long stretches of time down in a dungeon wandering about. Most successful handheld games function around the ability to play in small bursts. Toukiden’s Monster Hunter-like missions served up gaming sessions in bite-sized segments and it worked really well. These save points at the circles serve the same function, keeping Demon Gaze very playable. There are a couple of reasons why Demon Gaze is not going to appeal to everyone. The somewhat risque nature of the female interactions might be uncomfortable for some, and the dungeon crawling genre has not advanced a great deal over the last couple of decades. It is a very slow, deliberate style of game that can be difficult for newer players to the genre to adapt to. On top of all that, Demon Gaze is often punishingly difficult.

These small concerns fail to seriously hurt an otherwise excellent game. The presentation values are solid, but more than that a few innovations mixed with some classic tried-and-true gaming mechanics create an experience perfectly suited to gamers such as myself. Demon Gaze feels both familiar and fresh at the same time, delivering a game that is absolutely worth playing if you own a Vita and do not mind some time crawling around dungeons.

Posted by Nick
Follow:
Owner, Founder, Editor in Chief—Currently a reviewer for Chalgyr's Game Room covering all platforms
Previous Article Bound by Flame – a few screenshots and a preview on choices
Next Article Who wants to play a more classic games on their Vita?