My first introduction to the RTS genre was shortly after my birthday near the tail end of 1994; I remember heading up to our not-so-local Babbages, Inc. to pick myself up something fun and interesting. While perusing the racks I found a computer game that had a pretty stellar picture of a gruff man who looked almost like a pirate and an ugly green orcish looking thing staring daggers at one another. I thoroughly enjoyed the box art and the description with screen shots on the box and I thought to myself “Warcraft: Orcs & Humans, huh? Sounds neat.” When I got home and installed it I was immediately hooked; I have been a fan of the RTS genre ever since. 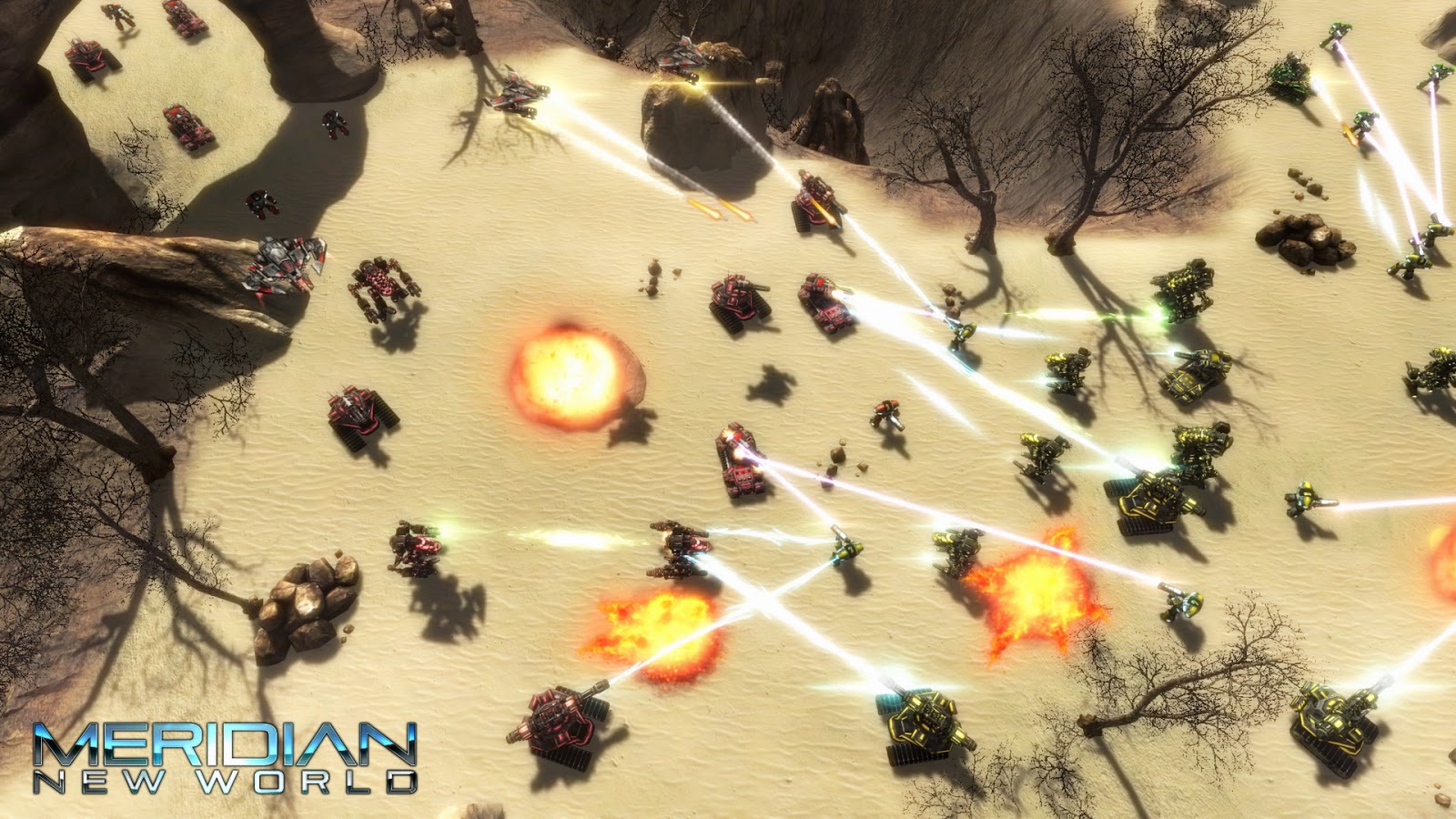 Fast forward 20 years and the genre has undergone a number of changes, adding RPG-like elements, humor, deep and involved story lines, as well as other less loved restrictions like low-population limits, super units, and FMV-cutscenes. In recent years the big names, Command & Conquer and StarCraft have been about the only RTS games that you could get so when I got wind of Meridian: New World I was stoked. Developed by a single person, Meridian: New World is a throwback, an homage, to the RTS games of old; it brings in a sense of balance, the pure glory of micromanaging your units, harvesting resources, and sending waves of pulse-rifle wielding marines and auto-cannon armed bi-pedal mechs to decimate your enemies back to the forefront of the genre without sacrificing the storytelling and the other aspects of the game.

The basic premise in Meridian: New World is that you are taking control of the commander in charge of mission to scout a remote goldilocks planet that could serve as a new Earth. Throughout the intro and first few levels of the game you will come to find that there was a pretty terrible war back on Earth and the planet is on its way out, so the world decides to band together and send some folks out to Meridian, this distant planet, to prep it for the mass exodus from planet Earth. As you are nearing the end of your mission and you are prepping to take off, your engineering officer intercepts a distress beacon from some remote outpost and the launch is scrubbed in favor of going to offer assistance. 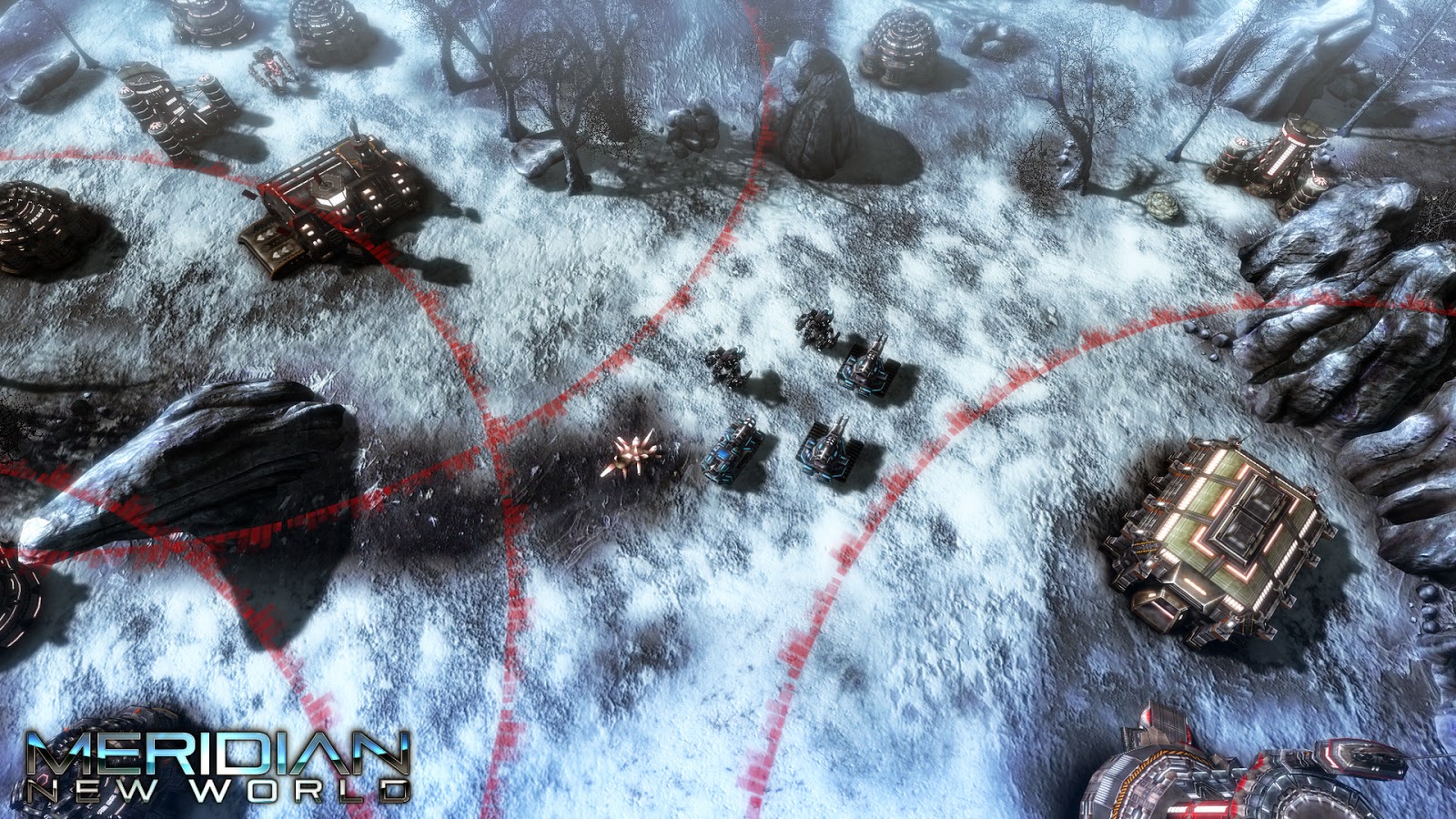 The first few missions of Meridian: New World are your run-of-the-mill tutorial and story-driving missions, however, they set a certain precedent that is maintained throughout the game; they are good. Very good. Simplistic, but not hand-holding; interesting without being too dramatic or cheesy. The first things you will notice as the infantry and Chimeras, which are multi-use bi-pedal mechs, come streaming out of the dropship is just how nice the world looks. It is a rough world, a wilderness that sets the tone of truly being alone out in the fringes of space. The lighting is spectacular as shadows of the trees and rock formations move over your units in this bright and harsh world. The units are like something out of a sci-fi mech fan’s dream; you can tell that the model designs were likely influenced by great mecha’s of the past such as the Spartan from the Macross anime, a number of different mechas from the Battletech universe, and some of the aerial units’ designs were likely influenced by the designs in the movie Aliens.

In between missions you will find yourself in direct control of Daniel Hanson, the commander of the expedition to Meridian. You can walk through your ship and speak to the various members of your crew or you can visit the various terminals that will provide you with crew bios or allow you to read up on the history of the world. You will find training simulators that you can visit, an engineering bay where you can speak to the head engineer, or the labs where you can find out more information on the different technologies at your disposal. Missions are accessed through a map room that shows the different sectors and missions that are at your disposal throughout the game, some will feel more like side missions to provide you with more fuel or technology but they do not feel tacked on to the main storyline. The most interesting feature is the RPG-like elements where your commander will ‘level up’ through combat missions, providing access to special abilities that can heal units, provide them with a boost to fire rate or you can access skills that will allow you to directly damage enemy units; it is a welcome departure from the standard RTS design and adds a level of customization to your play through that you won’t find in other games.

On the subject of customization, while you are researching your various technologies throughout a mission you can research different loadouts for your units. Take the Chimera as an example, the default unit is used as a worker, gathering resources and in charge of building your structures, you can also outfit them with a laser that does good all-around damage or you can equip it with an auto-cannon that will decimate enemy infantry. Being able to micromanage the loadouts of your units allows you to respond quickly to different threats and provide an excellent mixed unit designed to deal with any number of enemies.

For a game that has been developed by a singular person, Meridian: New World feels like a triple-A title with a large development team behind it and a giant budget. For such a small development team the polish and balance is amazing, the fact that there is so much lore available to you for reading up on the universe as well as the fact that there is an absolute ton of voice-acting give the game a level of depth and provides immersion on a level that most games struggle with, shows great promise for the future of Meridian: New World. If you would like to check it out, look for it here. 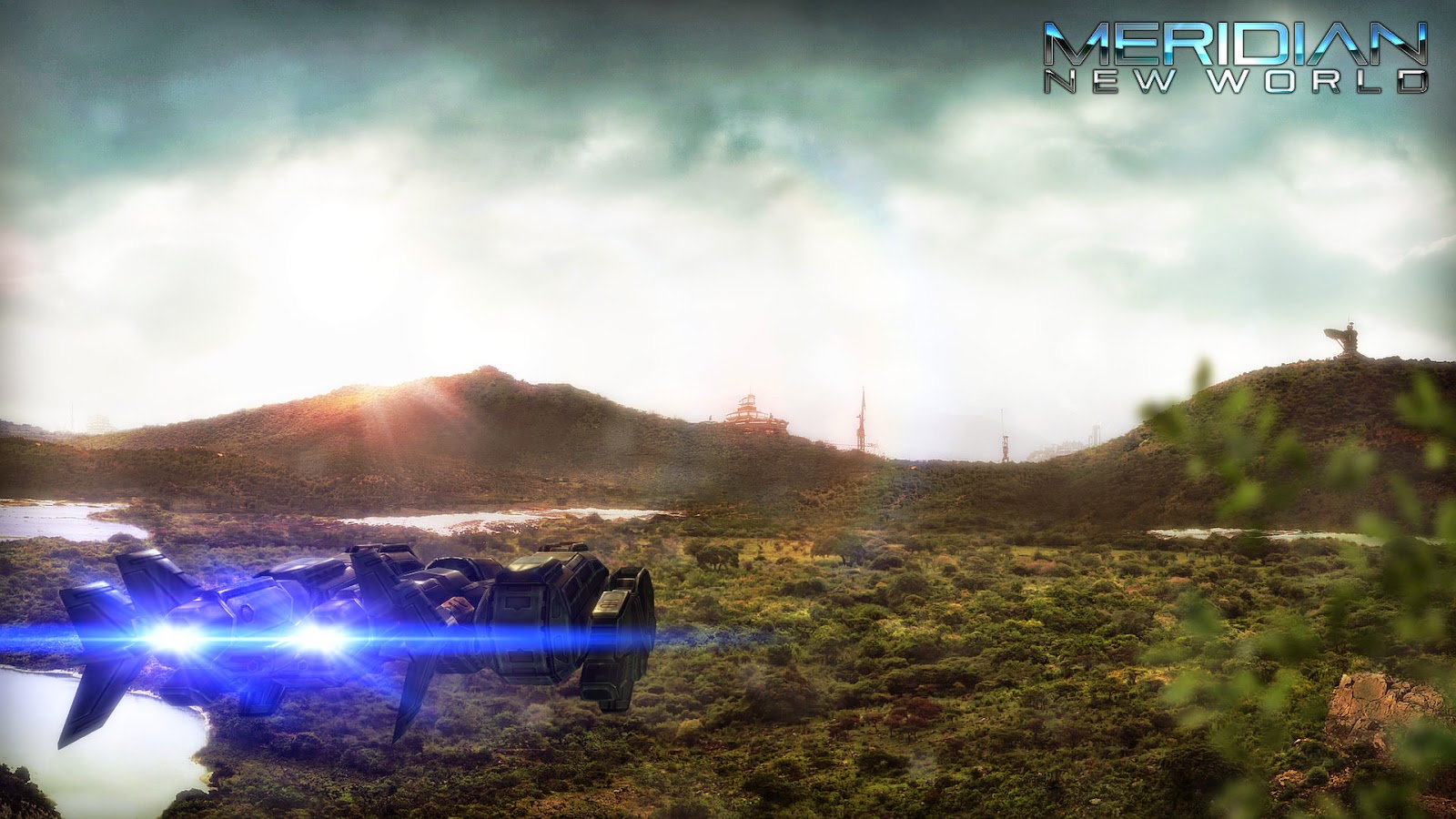 Posted by Robert
Follow:
Hardware Specialist—Currently a reviewer for Chalgyr's Game Room covering all platforms
Previous Article Mario Kart 8 – Screenshots and preview
Next Article Child of Light – Preview of what looks to be a gorgeous game