I was not sure what to expect when I first received a pair of the extremely affordable No Scope Demon Series gaming glasses, after all I have relatively poor eyes and am extremely color deficient. To say the least I was a bit surprised when I put them on for the first time. 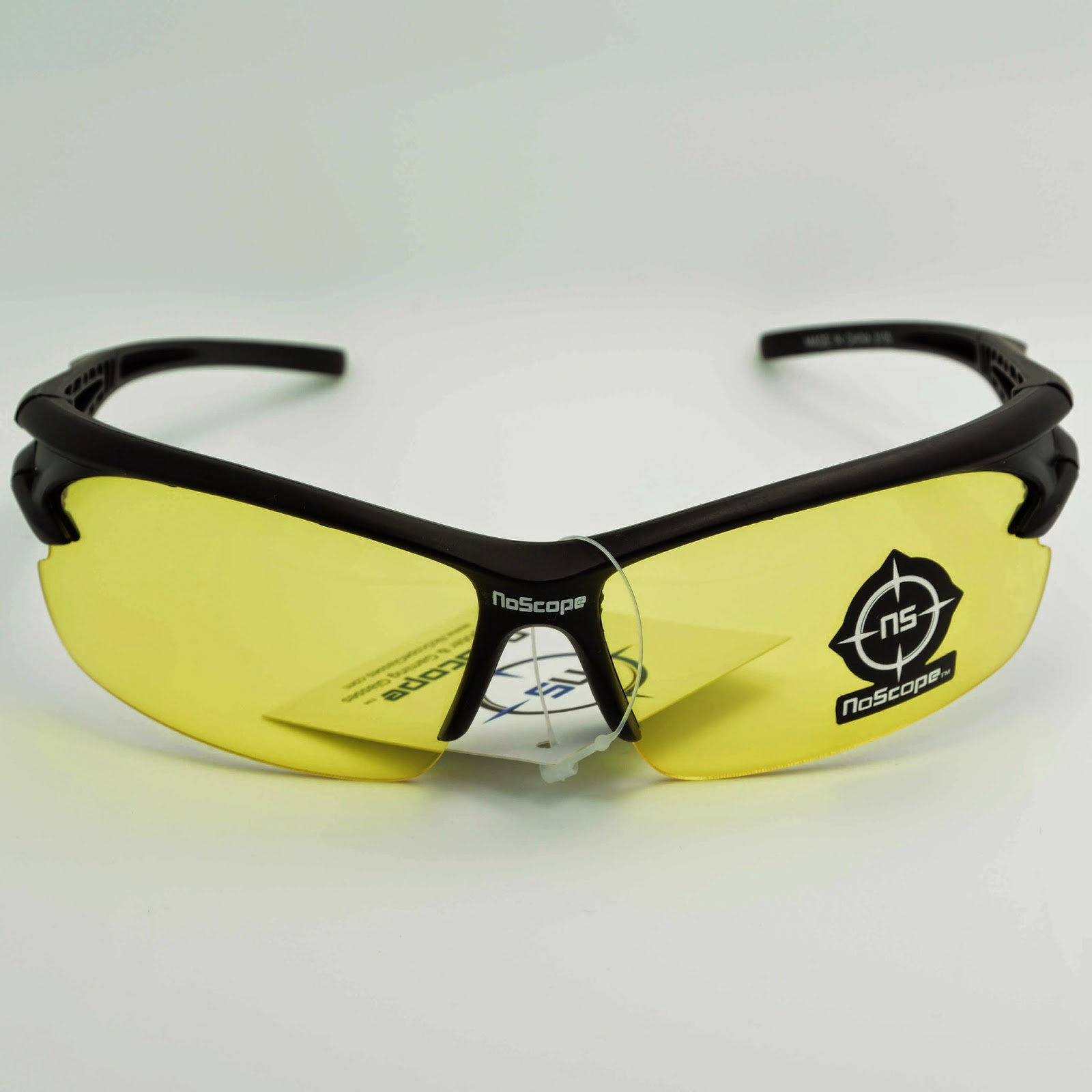 Before I get into the nitty-gritty of the glasses themselves I want to go over the concept and science behind “gaming glasses.” Optics designed to reduce eye strain and protect the wearer’s eyes have been around in a great many years however they were normally in the form of gaudy safety goggles and found mostly in factories and on construction sites. With the personal computer (and gaming consoles, thanks to the Atari and the Nintendo Entertainment System) becoming more and more relevant throughout the early 80’s to the point where, by the end of the decade an atypical family of four could afford a home computer. Through the technology boom in the mid-90’s to current day households and businesses alike are flooded with desktops, laptops, tablets, smartphones, multiple flatscreen televisions and a plethora of gaming consoles, studies by venerable institutions like Iowa State University, Ohio State University and the Mayo Clinic, amongst others. Eye doctors all over were prescribing expensive lens’ and glasses to regular user of computers and gaming consoles and in 2007 Gunnar released a set of frames designed to reduce eye strain by filtering certain types of UV rays emitted by products like televisions and LCD screens. They also increase contrast in a way similar to shooter glasses which are designed for regular users of firearms. Recently competition to the much more expensive Gunnar line has been popping up and that is where the No Scope Demon Series gaming glasses come into play; released at a fraction at a cost and claiming the same benefits that the more expensive counterparts claim. Do they work?

As mentioned I have pretty poor eyes; I have two sets of glasses that I wear and am extremely color deficient so when I pulled the No Scopes out of their well-made nylon bag, wiped them down with the complimentary microfiber cloth, and then put on the No Scopes I was quite taken back. Aesthetically the glasses look very similar to a set of protective eyewear one would find in a workshop but they are not gaudy and are very lightweight and the wraparound design is made for comfort while providing support for your peripheral vision. The glasses have a bright yellow tint to them so one may expect the world to be tinted yellow but by some amazing witchery the world remained clear and vibrant and when I focused on one of the many computer monitors at my desk I didn’t feel much of anything at first. Now, the lack of a yellow tint to everything may be due to my color vision issues, however it was a welcome fact that it didn’t immediately disrupt my vision. 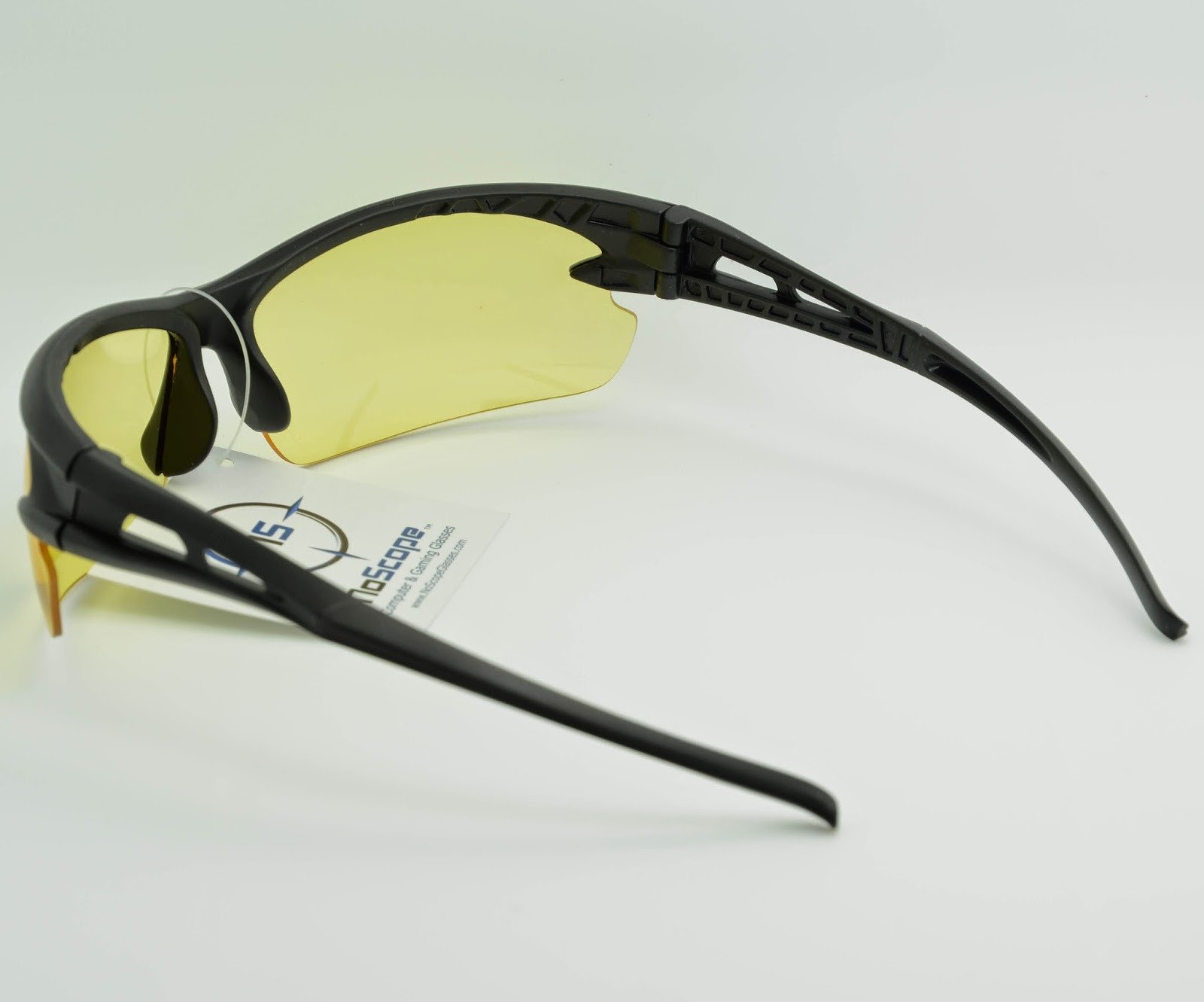 Though I regularly don my glasses, the lightweight construction of the No Scope glasses made them nearly disappear after a few minutes of wearing the set and I wasn’t really conscious of them being on the same way that I am when I wear either of my sets of glasses. On the down side though, the glasses sit relatively high and I would feel the upper rim of the glasses brush my eyebrows as I frowned or squinted at the screens; this may be more a personal preference as my regular glasses sit more towards the end of my nose than up on the bridge. Where I did find a problem is when I places my extremely comfortable though large headset on; the wraparound design of the No Scope glasses causes the legs to bow outward and when you place a quality set of circumaural headsets on while wearing the glasses, the legs are pressed uncomfortably against your head and tend to dig in just above the ears. With the popularity of the Turtle Beach headsets I can see that this would be a problem, but when wearing the basic Xbox 360 headset there was no interference with the glasses and it was quite comfortable.

While at work I spend about 9 hours looking at a number of monitors which can cause eyestrain and can be quite uncomfortable so I spent quite some time with the No Scope glasses on and was thoroughly pleased at the end of the day when I took them off that my eyes weren’t dry and uncomfortable. Normally after a standard day at work without the glasses I would feel like I had someone rub sand in my eyes; not so with the No Scopes. When I returned home to put them to the test with various games (Batman: Arkham Asylum and Tales of Graces F on the PlayStation 3 and Halo: Reach and Battlefield 3 on the Xbox 360) I was immediately surprised and quite pleased to find that the rainbow effect that I would see when viewing my DLP TV was all but eliminated. Shifting my distance from the television numerous times from 10 to 12 feet away to as close as 3 to 4 feet I experienced no eyestrain after about 5 hours of gaming and I could not tell that the glasses were on. The easily forgettable weight actually caused me to completely forget that they were on and when I was done with a bit of gaming, I unintentionally left the glasses on to read the last hundred pages or so of a book that I read; a testament to the quality of the build and easily forgotten weight.

All in all the glasses are spectacular; for the price the benefits that I received while wearing them for the long hours that I was either in front of my wall of computer monitors or my gaming consoles, I felt no eyestrain and was quite pleased with the results. The lightweight construction, low price, and magical effect of the lens is well worth the pittance that they cost and would recommend that any heavy computer users or gamers pick up a pair as it really does reduce the eyestrain and are quite comfortable. The only real downside that I see is that when wearing the circumaural headsets and the uncomfortable press of the legs into your skull. While the glasses sit high on the nose, I found that it was more of a personal preference of mine to wear my regular glasses low on my nose rather than it being a design flaw. I am certainly a convert and recommend others out there to pick up a set of No Scopes for the price, comfort and reduced eyestrain. 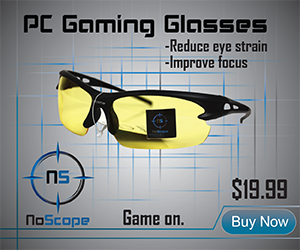 Posted by Robert
Follow:
Hardware Specialist—Currently a reviewer for Chalgyr's Game Room covering all platforms
Previous Article Atelier Shallie: Alchemist of the Dusk Sea – Early screenshots of the next in this popular JRPG series
Next Article Hazewalker – Metroidvania title with Kickstarter later this year