The announcer in Trials Fusion likes to say: Welcome to the Future. Now that this series is finally on the latest hardware, does it get us there or not?

Trials does so many things well, it is easy to overlook the handful of smaller issues that the game has. It is immediately accessible, but once you have invested some time into it, incredibly challenging as well. It packs excellent visuals with pounding music and clever track design. While not a perfect game, it is still one of the best available for the Xbox One so far. 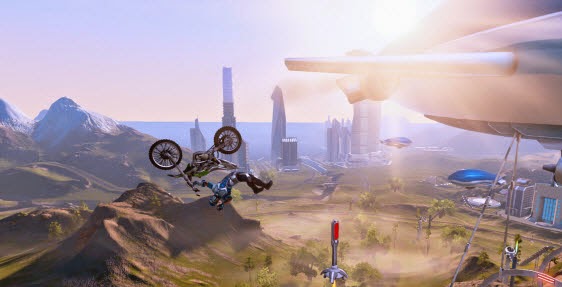 For those who have not yet played a Trials game, what I was immediately reminded of was the classic Excitebike game on the NES. Of course, this is considerably more advanced than that, but hte idea of working from left to right over a track of various jumps and hills makes up the core what what you will be doing with Trials Fusion.

To stop at that however, would be a disservice to the game because there is a lot more offered here. You can do a decent variety of tricks, there are several different modes and all of it is played out against some excellent visuals. The idea here is to create a sense of speed and exhilaration, but there is a lot of humor to be had while playing Trials Fusion as well. That keeps the experience light and fun, taking some of the sting out of later races can provide punishingly difficult. 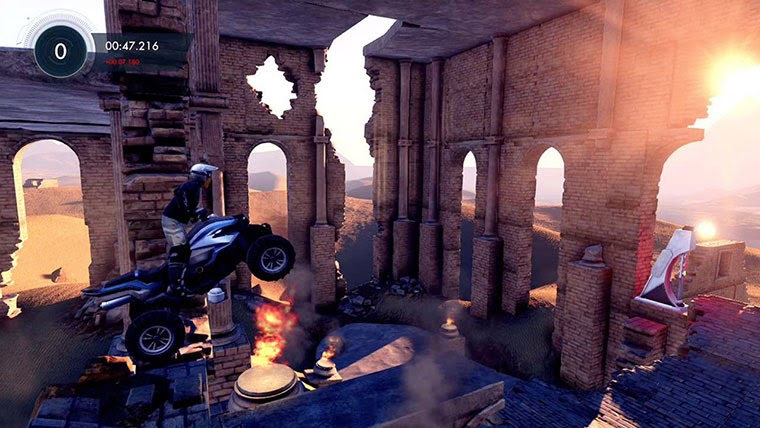 A few people have reported that the textures load slowly or that the frame rates are dropping, but I never experienced any of that. There is a day one update that helps increase the resolution, and the experience is largely a gorgeous one. The character animates well and there is plenty taking place on the screen, adding to the sense of frenzy throughout the racing. Some of the backgrounds are absolutely gorgeous, and I loved the variety in locations. A futuristic lab with roads being assembled right in front of you was my youngest daughter’s favorite, while I preferred a couple of the outdoor vistas when using the four wheeler. One level made absolutely brilliant use of the light peeking in around trees and through windows in buildings, while another played out with the biker and course largely a silhouette against the setting sun. These three tracks are among those I captured and posted in the video of my gameplay at the bottom of the review, so take a look for yourself and see.

The music is suitably loud and pounding on most of the tracks. I can see where the music might not be for everyone, but I thought it suited the game rather well. The voice work could also be seen as hit or miss. A lot of the game’s humor is conveyed through some voice over that takes place while you are playing. Reminders that “the sky is up today” or warnings that the floors are currently moving – while you are racing along a track that is being assembled right in front of your bike as you race along – all mesh nicely with tone of the game. Sometimes your rider gets a bet repetitive with his “Whoa!” during a race, and the same could be said of hearing the voice over work happening in the exact same part of the track over and over again if you get stuck using the restart option a few times in a row.

It takes a little getting used to if you have never played a Trials game before, but the controls are both responsive and intuitive. It is surprisingly easy to just pick up and play. You learn to tilt, when to accelerate and to slow up (though who wants to slow down more than they have to?) and how to pull off a variety of different tricks. That last portion might be the most frustrating, however. It seems like the right stick would be the way to go for chaining together tricks, but it can feel sloppy at times instead. Some of the more basic tricks work just fine, but attempting to string together more complicated combinations can often leave you feeling like it is more luck than skill.

Loading times are short and the menus are pretty easy to navigate as well. The tutorials are basic, but get the job done as the game’s earlier tracks are fairly easy to progress through. The difficulty ramps up in a major way as you progress further into the game, just as you would expect. This can make the game progression a bit frustrating for less experience gamers. My son ha no problem getting through almost all of the tracks, but my youngest really started to stall out on her progress around the fourth area because of how much harder the course was starting to get.

First, the good and the bad news regarding multiplayer. The good news is, there is local competitive options and they are an absolute riot. My son and I had a blast with it. Unfortunately, the lack of any online multiplayer feels like a big misstep. Thankfully there are leaderboards and rankings, but competing against friends (and laughing as they wipe out in hilarious fashion) feels like a fairly major missed opportunity.

There some leveling and money earning hooks, which are fun for buying gear to help customize the appearance of your rider. There are also different vehicles for different types of tracks. The four wheeler was actually a great deal of fun, with more stability but less speed for crazy tricks. The method of scoring medals on tracks to help unlock future zones is pretty standard in games like this, and as I mentioned earlier – they are easy to acquire early on, but grow harder as the game progresses. The need to have more medals serves as a pretty good reason to go back and try to play through earlier areas you might have only gotten a bronze in, to see if you cannot earn a gold this time. This mechanic serves as an excellent source of replay value.

There is a track creator mode, and it is pretty dense stuff. Thankfully there is a tutorial video out there you can watch to help coach you through the basics, because while there is a great number of options available to you, it is not as easy to pick up and use as playing the game itself. Since Trials Fusion is so new, the number of course options out there for download right now are pretty sparse, but I have incredibly high hopes that good user content will help to lengthen the lifespan of Trials Fusion by quite a bit.

Some of the parts of Trials Fusion feel a bit off. Whether it is the right stick for doing tricks or an announcer than could become both repetitive and annoying, these little things seem like they could be problems that would have derailed a lesser game. Thankfully the whole of Trials Fusion is excellent and it brings all of its parts together in a face-paced, tidy package that is a great deal of fun to play. The announcer in Trials Fusion likes to say to you “Welcome to the Future”. I am not sure we are quite there yet for this franchise, but it feels tantalizingly close. A few missed opportunities exist, but Trials Fusion is still an excellent game worth playing.