Bubble Pop World tries to make use of the 3DS technology in a way no one else really has yet. That is a good thing, as it allows this title to stand out a bit more than it otherwise might have. It gives the game a sense of novelty and even serves as something of a technical demonstration of what the 3DS can do when using AR. 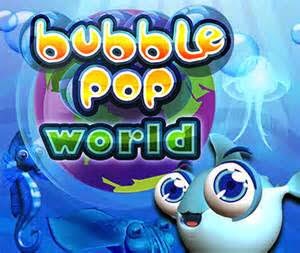 When the Nintendo 3DS first came out, it was an interesting piece of hardware with lots of possibilities. Perhaps one of the ideas that seemed filled with potential, but low on initial realization was the use of AR. There were cards packed in with the machine itself, which were neat to fiddle with for a time but quickly became forgettable. I stowed those cards into my 3DS carrying case and largely forgot about them – until now.

If you ever ever played a ‘match three’ game similar to Bust-A-Move, you have a pretty good idea of the core game mechanic at work here with Bubble Pop World. What really serves as the main hook here is the ability to play with 3D objects that you are attempting to dismantle. You set the AR card down on a table and then can move your 3DS around the card, viewing it from different angles.

The idea is actually quite brilliant, and it is probably the single best demonstration of what this facet of the 3DS can do so far. Unfortunately some of the nagging concerns about the AR in general rear their head here as well. For one, you need some space to do this. A computer desk may not be ideal since you may need to angle around the virtual object a bit. A table out in the open that can be circled is probably ideal.

Also, I tend to play a lot of my games in a relatively dark room, but for this to function properly you need enough like that the card can be read by the system effectively. It is neat to see these objects ‘created’ in the middle of your living room, and it is fun tearing them down with your shots, but it can be a bit inconvenient if you are used to gaming on a sofa or bed in a darkened room.

The good news is, the game is not terribly difficult, which certainly allows it to appeal to younger players. With over five dozen puzzles to beat, there are plenty of levels to keep someone busy. The shooting mechanic actually works really well, you just need to have a steady hand. One of the greatest assets of the 3DS is that it is portable, but given these three restrictive elements, I find it unlikely that Bubble Pop World gets much play in the back of a car on a long road trip. 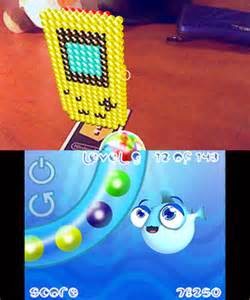 The presentation values are a bit underwhelming, with average-at-best visuals, sound and music throughout the gameplay experience. They certainly do not hurt the game, but they do not make it particularly memorable either. In fact the majority of the attention here is going to be focused on the AR interactions, and rightfully so.

There are a couple of different modes and mini-games available, but I think one of the most inventive aspects of Bubble Pop World is that you can create your own levels you can share out with others vita QRs. The interface for the editor is intuitive if perhaps a bit overly simple at times. There could be a few more bells and whistles for those who really like to delve into level design, but with such a low barrier even younger gamers should be able to whip up their own designs in fairly short order.

All in all Cypronia was ambitious in their attempt to utilize the vastly underused AR functionality of the Nintendo 3DS, and in that sense they successfully showed off a feature of the system in much the same way Wii Sports showed off motion controls several years ago. Wii Sports is a tough comparison of course, because it had a better variety to its games with more options for people to play, but Bubble Pop World deserves credit for putting a new twist on a classic style of game. 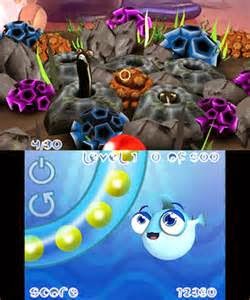