I tend to get a bit uneasy when games try to blend multiple genres into a single game; you may come up with some hideous amalgamation of a beloved game type or in some cases, you will have a glorious, shining example of all that is good in the universe. Full Bore is a 2D puzzle/adventure game, blending fun puzzles, simple platforming, and deep adventuring into the singular world of bacon-filled, er, boar filled miners. 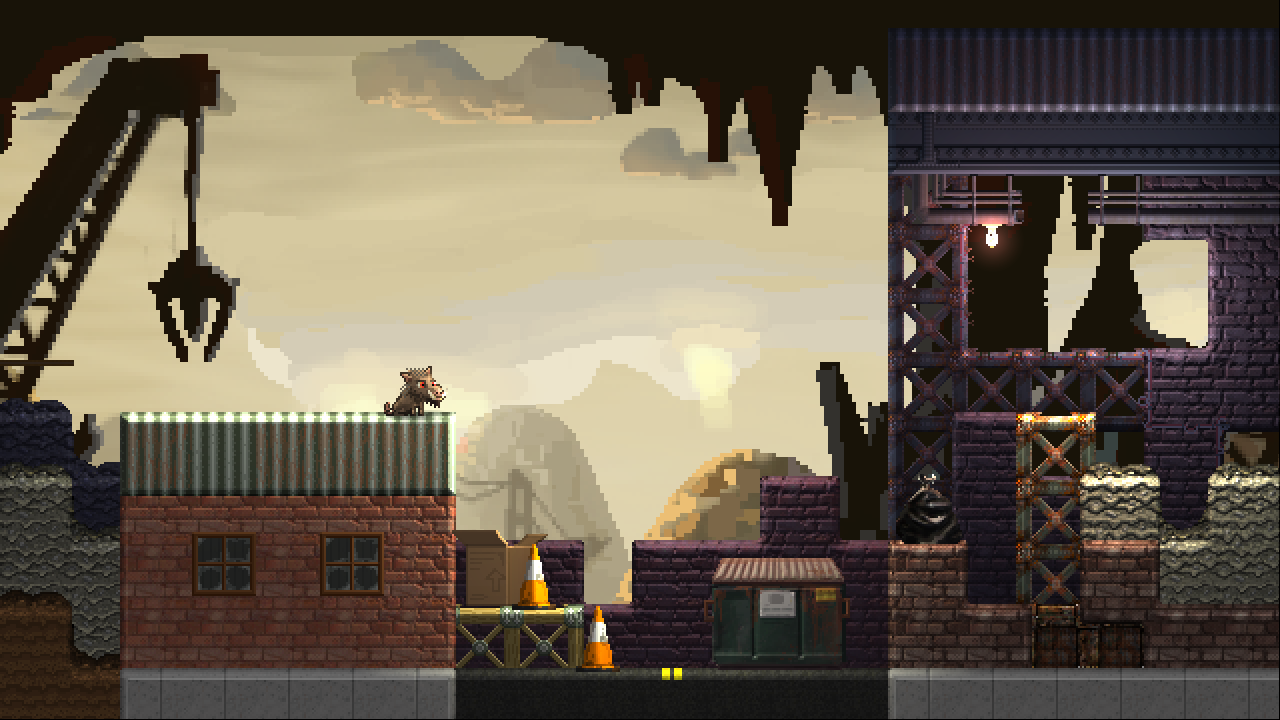 In Full Bore you’ll be placed in the proverbial shoes of a boar that was in the wrong place at the wrong time and it’s up to you unearth the hidden secrets of a deep mine full of boars pressed into service. The question is, can you dig your way out of this uncanny mixup of genre’s and uncover the secrets of the mine? 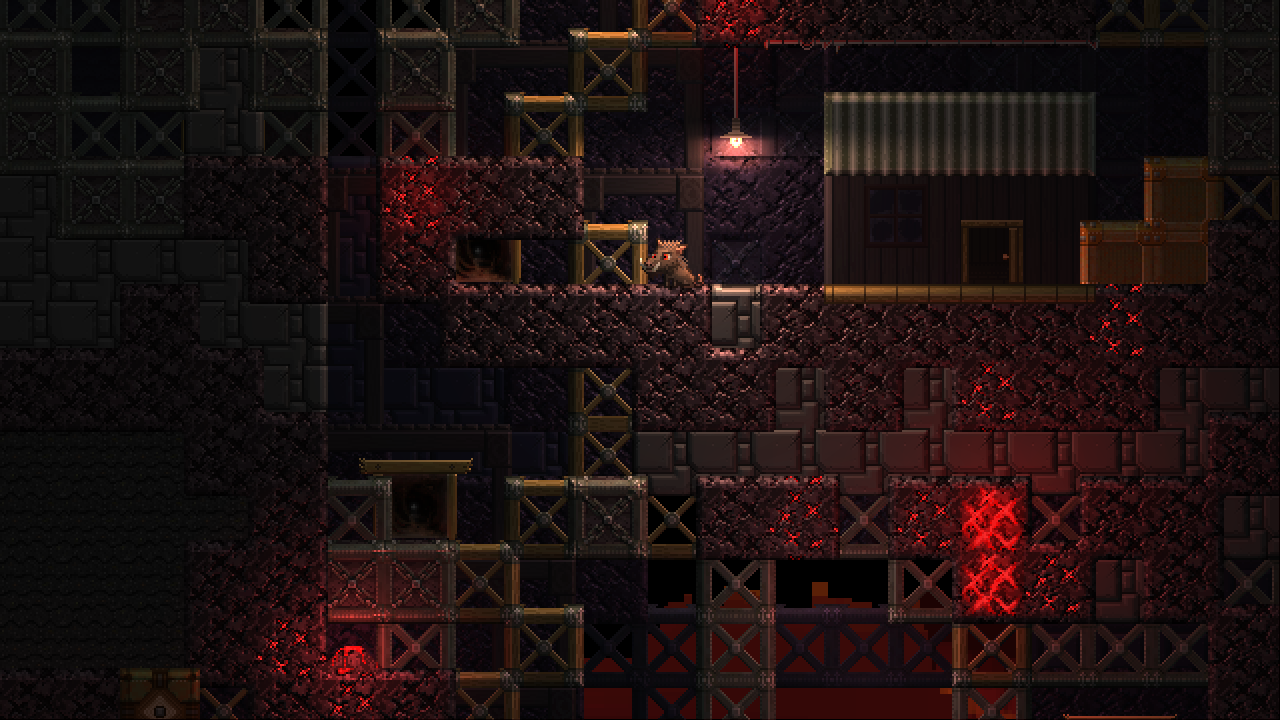 Full Bore’s graphics are neat in some cases; a nice blend of depth in a two-dimensional world with the clever use of stepped backgrounds. Essentially you will have a primary background then three layers of backgrounds on top of that. It makes for a very nice effect, however you will rarely see it since you are almost exclusively stuck in a hole in the ground where there are no variations to the background. The color palette, when you are above ground, is bright and vibrant and full of life, though the majority of your game will be spent below ground in dingy browns and dark caves. I personally enjoyed the time on the surface because of the variations to the color palette and the depth of the 2D world; below ground is just bland. The sprite-based art style is essentially an identical riff off of Terraria and while it works, it is certainly an overused feel and in Full Bore’s case, I believe it hurt it more than helped, given some of the gameplay mechanics. 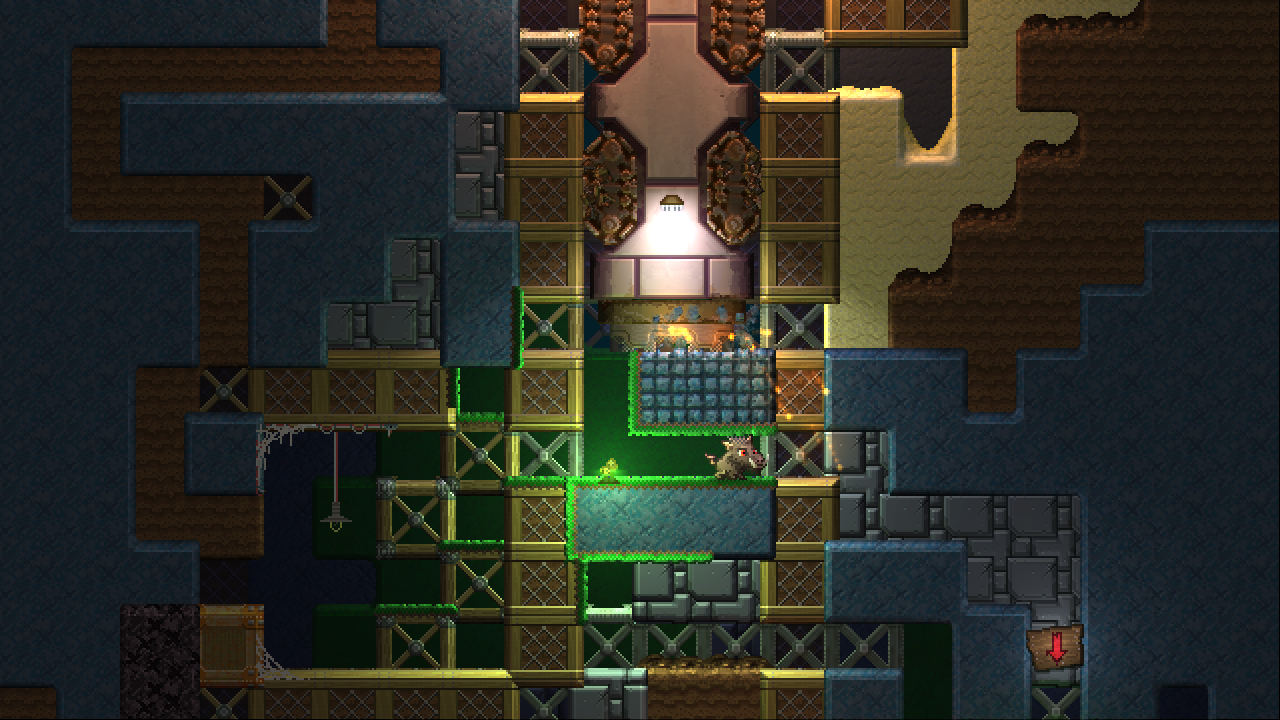 The music is actually quite peppy and upbeat and does a good job of trying to lift the oppressive feel that the game’s atmosphere exudes. The music is actually quite pleasant and I found myself simply pausing the game and turning the music up to listen as I handled menial tasks around the house. The sound effects though, are purely 16-bit and poor quality; from the ground stomp of your little boar to the snorting and huffing of the other beasts that you will meet, to the flat thumps of your boar’s head on whatever surface you are running up against. The effects just sound flat and dead, no depth and are about as rich as a mud pie. I found myself phasing out the audio all together and playing the game on mute or while listening to my own playlist via Spotify. Outside of the peppy music of the game, the audio is downright forgettable. 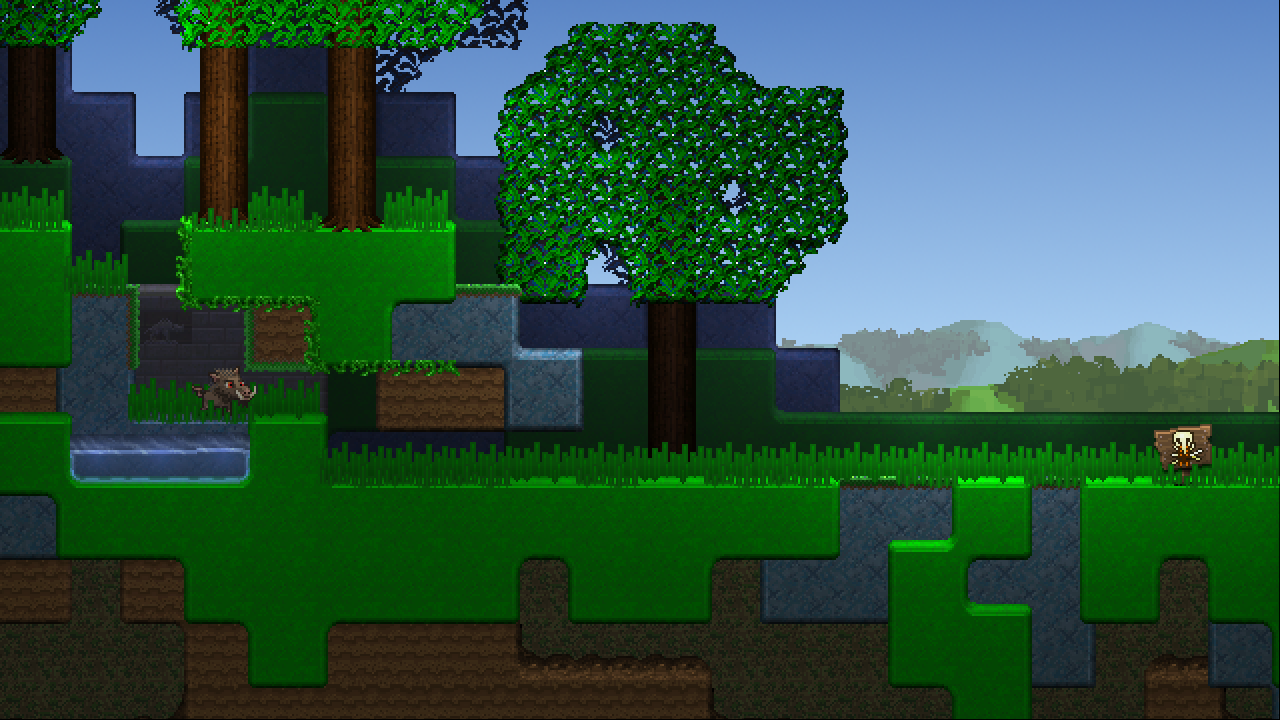 I am not entirely sure where to start here, whether it is on the controls or the gameplay mechanics, or the story; it is all equally bad. In retrospect I started Full Bore up without my gamepad connected, things may have been a little different if I did not see how broken the controls were from that perspective. To start, when you load Full Bore it simply asks if you want to play a male or female and provides the necessary buttons to press (arrow keys and the enter button, simple enough); once you choose your gender … there’s nothing. No introduction, no story, nothing. So I did what any gamer would do, I hit buttons. I found that the boar moved with the A and D keys and was content, after all, this is a side scrolling game. In addition to running left or right I thought maybe I could jump, but no – there was no jumping. You can go through and do a hog-stomp though this is not learned until a few minutes into the game so the only choice is left or right. Running right you fall into an obnoxiously long and un-skippable pit where, for a good 90 seconds, you are just falling.

Once you wake up and move you are greeted with a new key to press; the W key will allow you to move “up” an obstacle. It is awkward, poorly laid out, and just a terrible experience. In the first five minutes I was so disgusted with the controls and any lack of information that I simply shut the game down and ate a gallon of chocolate chip cookie dough ice cream. When I finished imbibing untold amounts of ice cream I plugged my Xbox 360 controller into the computer and set to Full Bore once more. The controls did not improve very much. Left stick moves left and right, as you would expect, X does the pig-stomping, Y allows you to rewind (which you will do, often, due to the inability of the controls to decide if up really meant up or to just zoom on by the item you are attempting to climb), and the RT / LT buttons allow you to, with a tiny bit more precision, run up or down obstacles.

With the controller plugged in I took to it with some trepidation, having a bad taste in my mouth from the inability to control my boar and was greeted with no real story to get started on. After meandering around the first few screens you are herded into a giant vault that is empty; you are accused of emptying it and you are then forced into labor by a giant ugly grunting hog and you’re on a quest to find the gems. Throughout the various screens you will encounter other boars, some will make a ridiculous quip about how you are the new guy that’s been forced into slave labor or others may present you with races (that you can’t win); the puzzles are fairly easy to start with some interesting and, albeit decent puzzles as the game progresses. You will find yourself rewinding often as your boar simply runs paste, under, over or into obstacles because the control scheme was poorly laid out and the boar did not know if you wanted to run up that block or bash it with its tusks to break through. 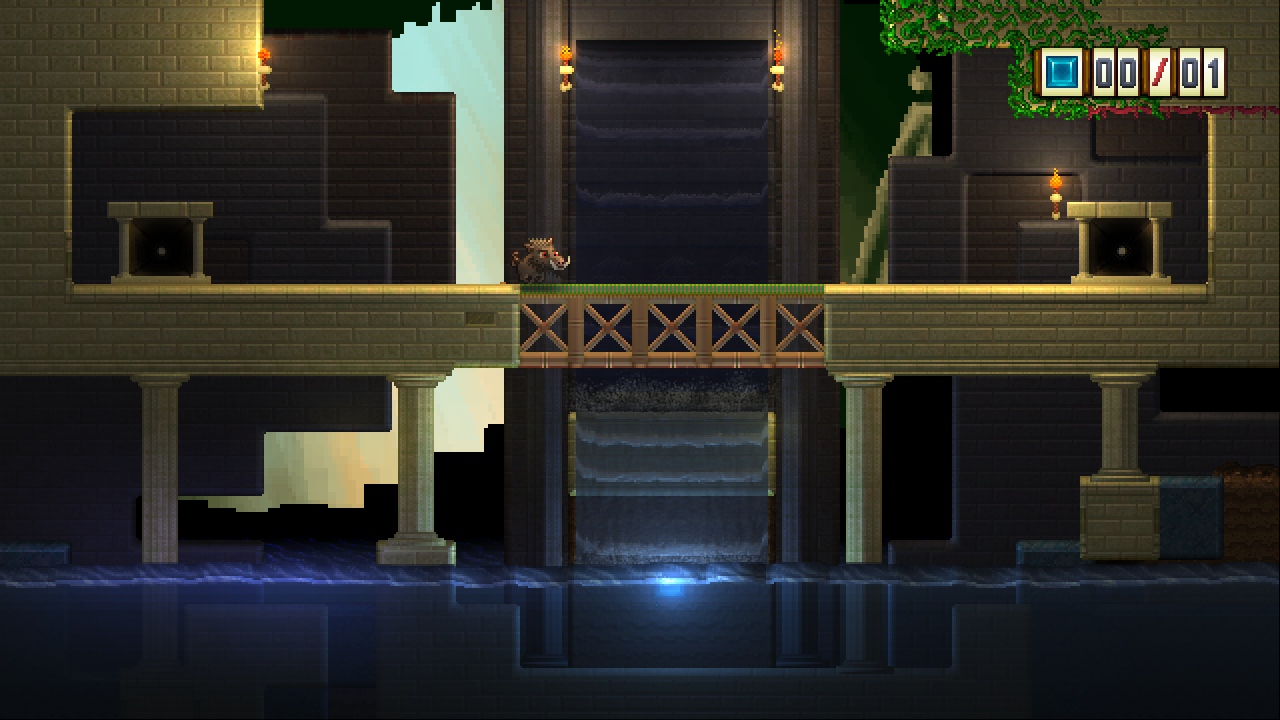 There are not many extras that you will find throughout Full Bore, not by means of multiplayer nor through any sort of decent leveling/iteming mechanic. You will however, find a treasure trove of passages leading to secret tunnels and hidden pathways, hidden gems and other mini games (like races) throughout the game. That being said, the pathway to the end is fairly linear with a few extras. By no means does that mean you can’t explore the massive world and find all manner of interesting things, you certainly can; you will just need to be a bit more of a completionist who is willing to put up with multiple reruns of the same section of a screen because the boar did not know where to go. 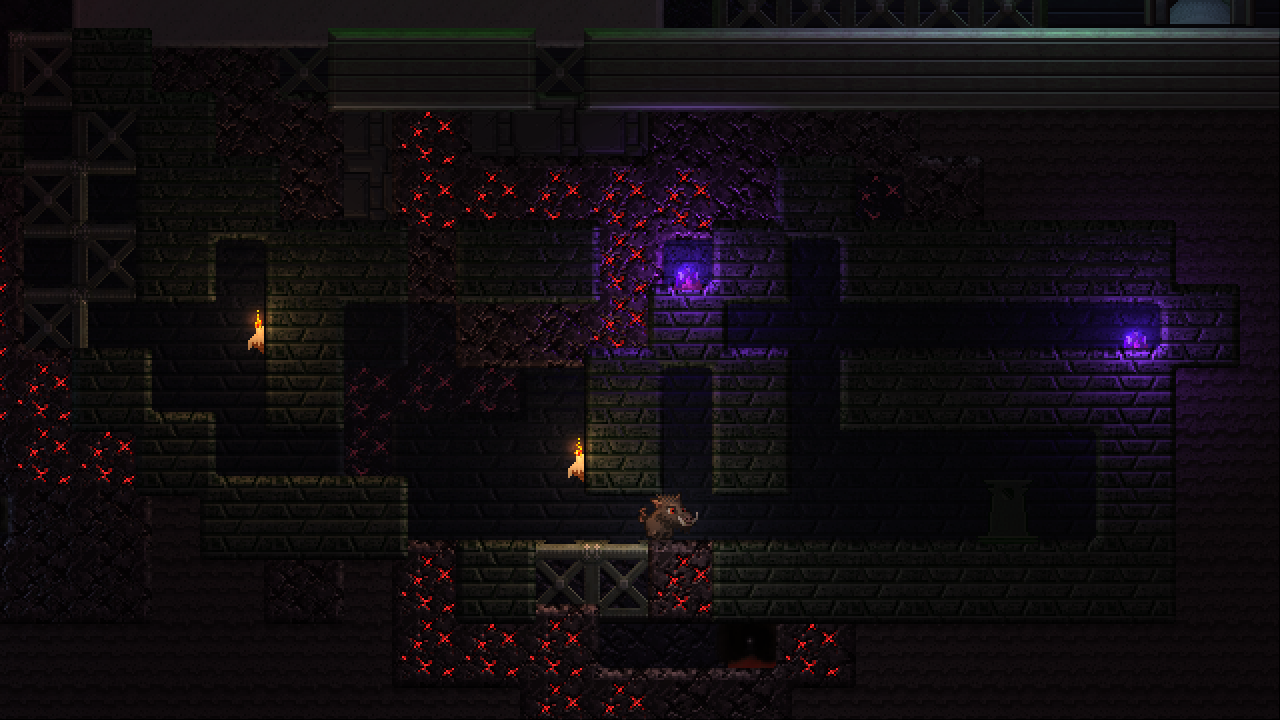 Full Bore was a game that I wanted to like; it had a peppy intro song and some neat depth to the background of the game. On the other hand the controls were so abysmal that any attempt to get invested in the game became a chore that just was not worth it. Being toted as a puzzle-adventure yet lacking in the basic controls of most games (such as jumping), while different, felt far more like a mockery of the genre as a whole. I completely respect the developers for trying something new, however what they tried did not work out well, as the contradictory controls and lack of robust platforming staples broke the experience killed the game very early for me. I applaud some of the more interesting bits. For one you play as a boar; not many games put you in the roll of a boar, I think it is fun especially since not enough games out there let you play as a dirty animal. On top of that the little bits of lore found in computer terminals placed throughout the game give some back story and try to bring interest to the world and they are in truth, quite deep by way of a platformer.

Unfortunately Full Bore, as a whole, feels like a broken experience that is trying to do more than it really can and in doing so it reaches too far and falls flat on its face.