Anyone who’s ever had a sibling knows that regardless of how well you get along, or how well they say that they get along, there will always be those moments in time in which you wanted to either throttle them or make them disappear for a while. Max, who is in this very situation, came home one day to find his younger brother Felix messing up his stuff and breaking his toys. Annoyed as he was, Max “Giggled” (yes, that is the search engine he used on the computer) a way to make his brother disappear and not thinking about the results, recites a spell found on the internet. Shortly after, Felix is snatched into another world by a giant fist and dragged away. Instantly regretting this action, Max jumps in after them starting the adventure. 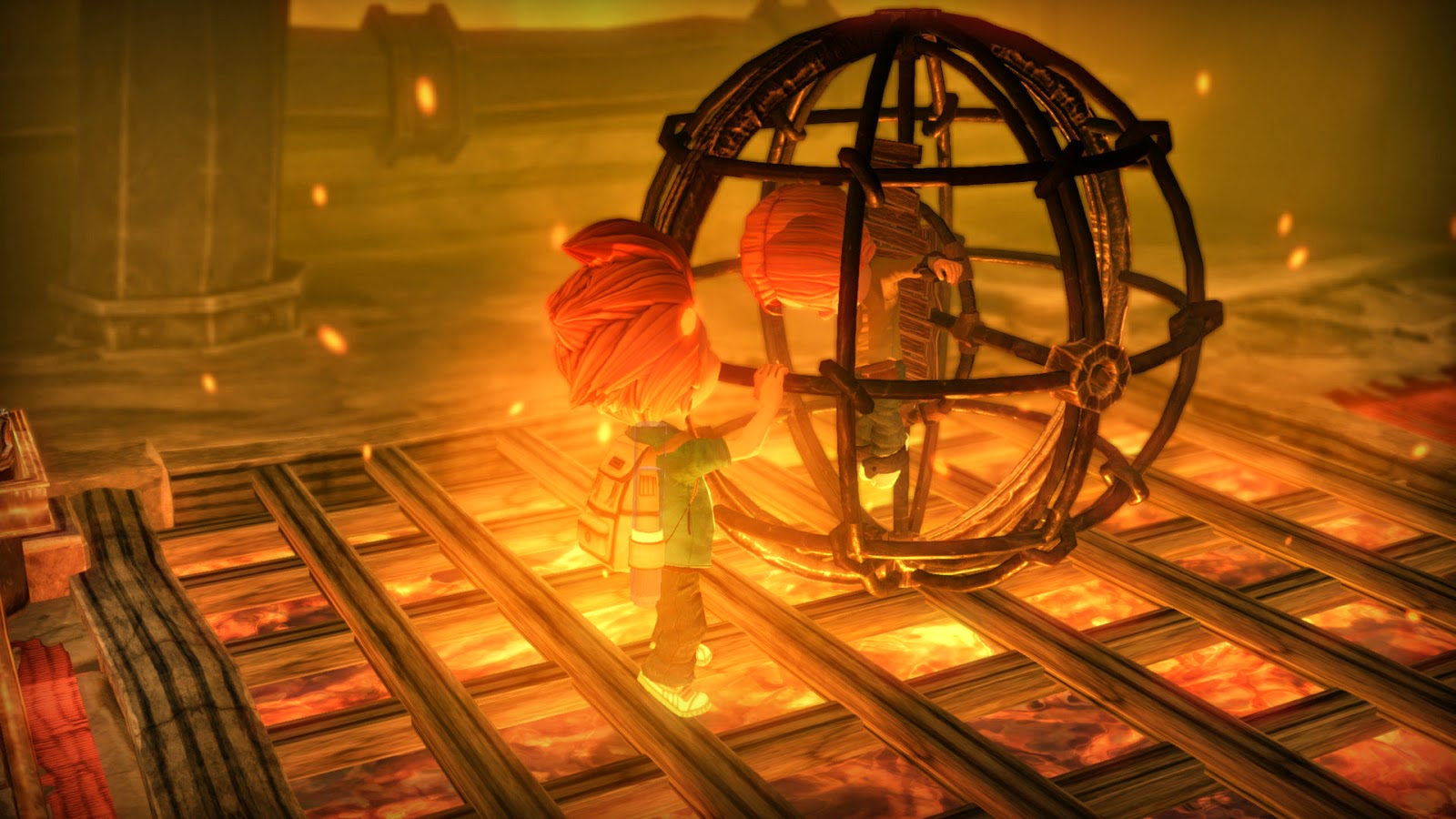 From the character models to the environments backgrounds and foregrounds, the plentiful visual details have a tendency to make your eyes wander all about the screen – to the platforming detriment of being in the middle of saying “oh that looks amaz…” and promptly falling into the hole. The chosen style for Max’s adventure really remind me of a Pixar movie, which lends itself very well to a game that focuses on child-like activities such as running around, jumping about and solving puzzles.

Everything looks fresh, fun, and lively, which breathes a lot of life into Max’s adventures as he runs through the various terrain to rescue his little brother while journeying through deserts, marshes, forests and caves. Each of these different locations is crafted differently and will require different thought patterns to make it safely through. This thoughtful approach to design shows up in character and environmental models that range from a hulking giant to jumping on monstrous floating marsh chests try to eat you when you jump on them. 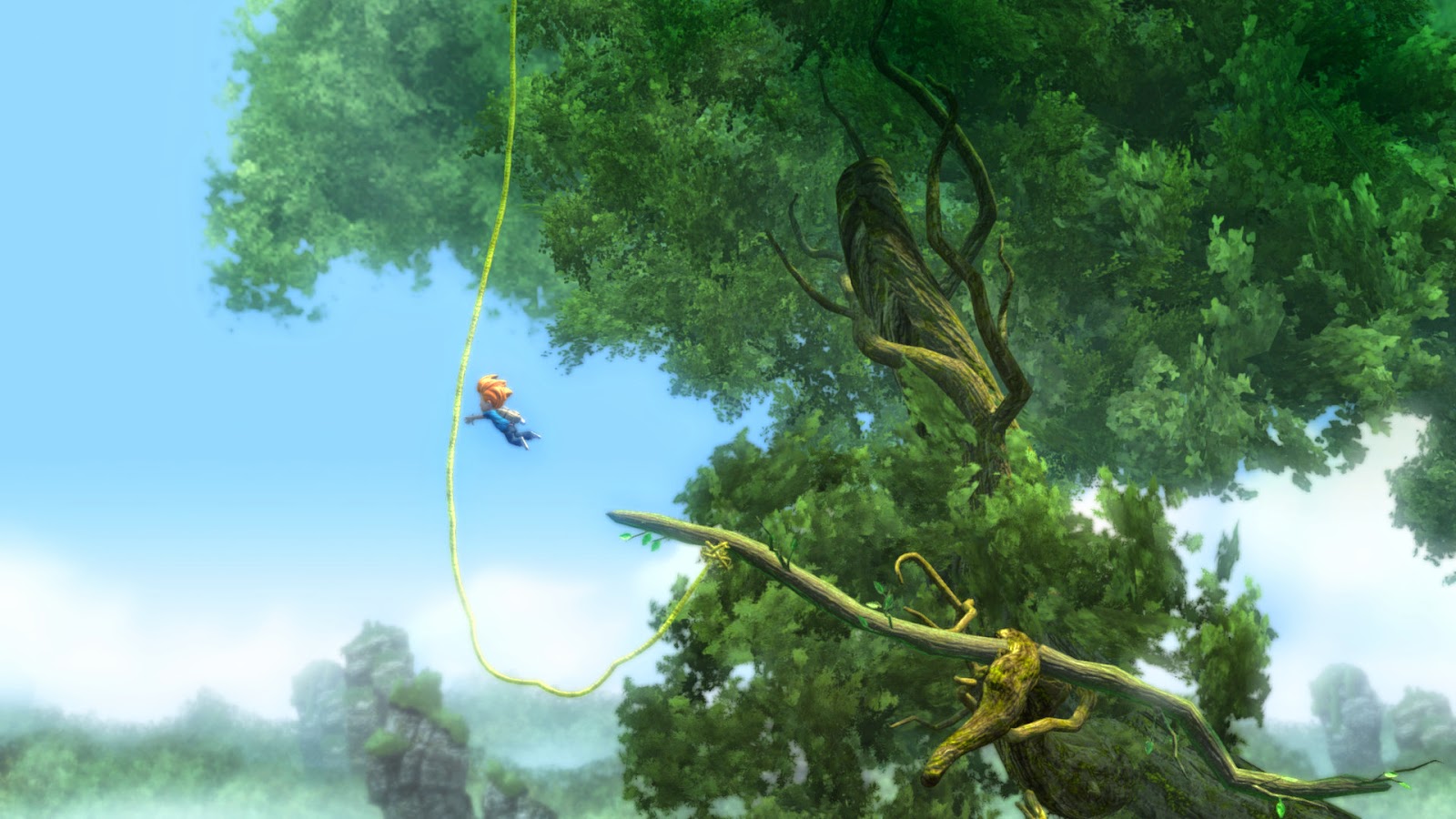 Now the problem: I didn’t know this at the time, but there are some issues with the Nvidia video cards that turns many of the graphics into what amounts to shadows (like in the newer Donkey Kong Country Returns, where all you see is the red or the tie or of the baseball cap). I started the game on my PC and I played through the second chapter on my laptop, initially thinking that this was an intended style. It wasn’t until I went back to the desert to re-visit that I noticed that the graphically awesome shadow style… should not have been there. It would be nice of course if the developers could resolve this issue outright so no one encounters it, but given the dreamlike quality of the shadows, perhaps that would be an interesting mode or effect to be unlocked later for a future play-through?

The soundtrack is perhaps the weakest part of the game. Even now as I am thinking about it, other than a handful of specific moments of “oh dear lord…” and promptly running away, I can’t really remember anything that particularly stood out other during what should have been far more memorable chase scenes. Sound effects on the other hand, were always appropriate for what was going on from moving a rock across the ground to destroying a magically created pillar. 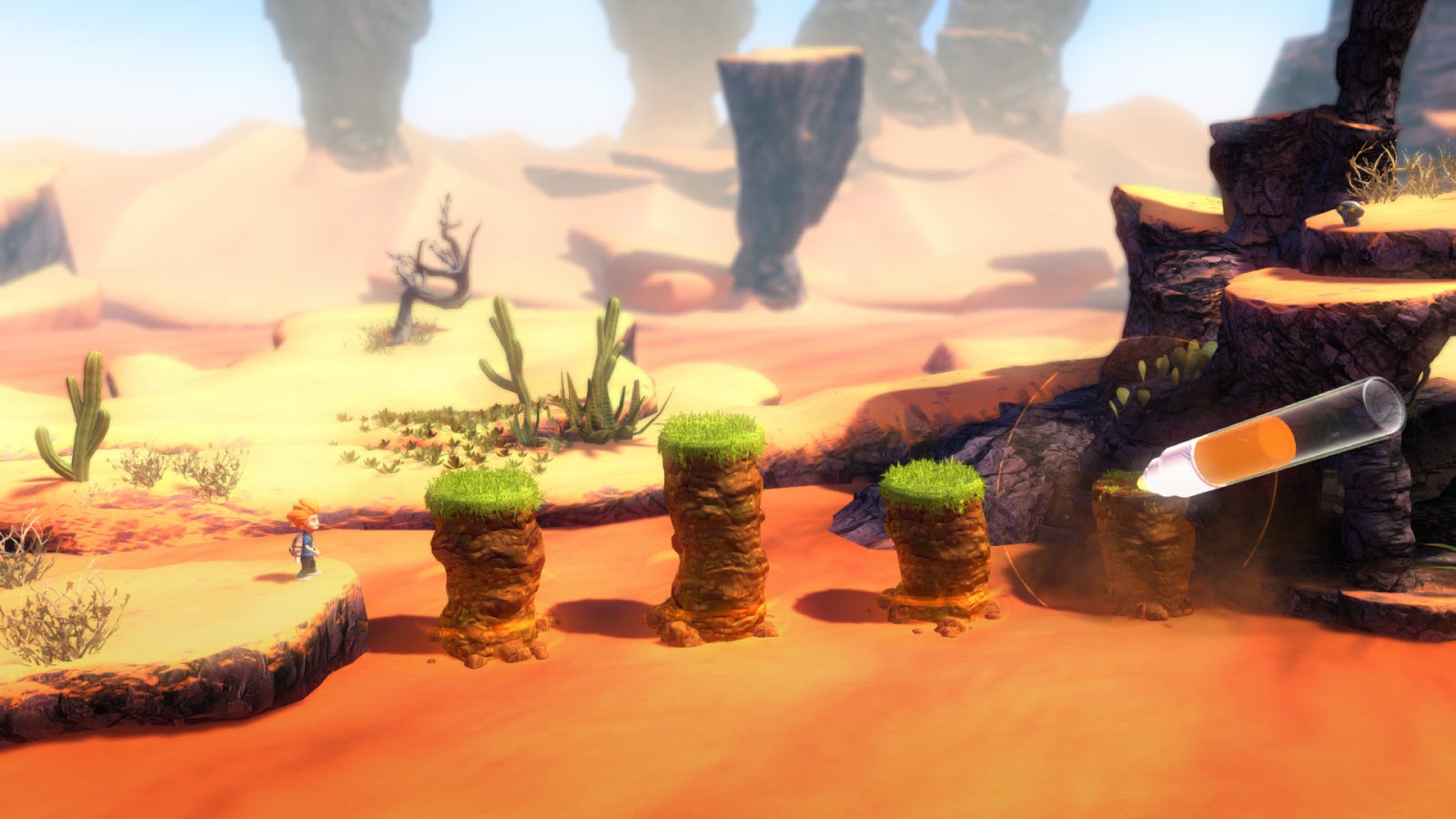 Dialog is the one area where the audio really shined, as it was all voiced and the level of care that went into it shows. All of the characters voices match with their given personalities and there is a natural flow of conversations to drawing on new-found powers from the marker to running for your life over and over again (it was your fault really for throwing the rock at the monster in the first place). Monsters who look kind of cute have these amazing roars that remind you they are not to be trifled with and that you had best find a way around or over them before they squish you.

I don’t know which sports Max participates in at school, but someone should offer this kid a scholarship. He has got amazing strength and dexterity when you consider his adventures – or the laws that govern our world do not apply. Gameplay has essentially been split into two components that merge into one another at several points in the game.

The first of these two are the platforming elements that take up a lot of the beginning of the game. It’s a rarity in a platformer, but this game does just about everything right. While moving through the environments you will spend half of that time running and timing your jumps from one platform to the next, running and jumping off a ledge to reach a vine to not fall into the ravine below, and climbing up various objects to reach the top of the area you are heading to. Everything feels smooth and fluid as you traverse the lands. If you walked up to a ledge and climbed up you would do this slower than if you ran towards the ledge and climbed up. Another case where momentum is key is that you swing faster on a rope and you can jump farther. The only thing that ever felt a bit out of place was when jumping for a far ledge and coming close – but then just falling down as Max never seemed to be able to grab those ledges. This could be rather frustrating if it happens several times in a row where you didn’t time your jumps properly. Still, the most important element is that jumping itself is very responsive. If you hit jump you jump. If you hit it lightly, you don’t jump as high or as far. Allowing for various levels of jumping creates opportunities to different approaches to a challenge. 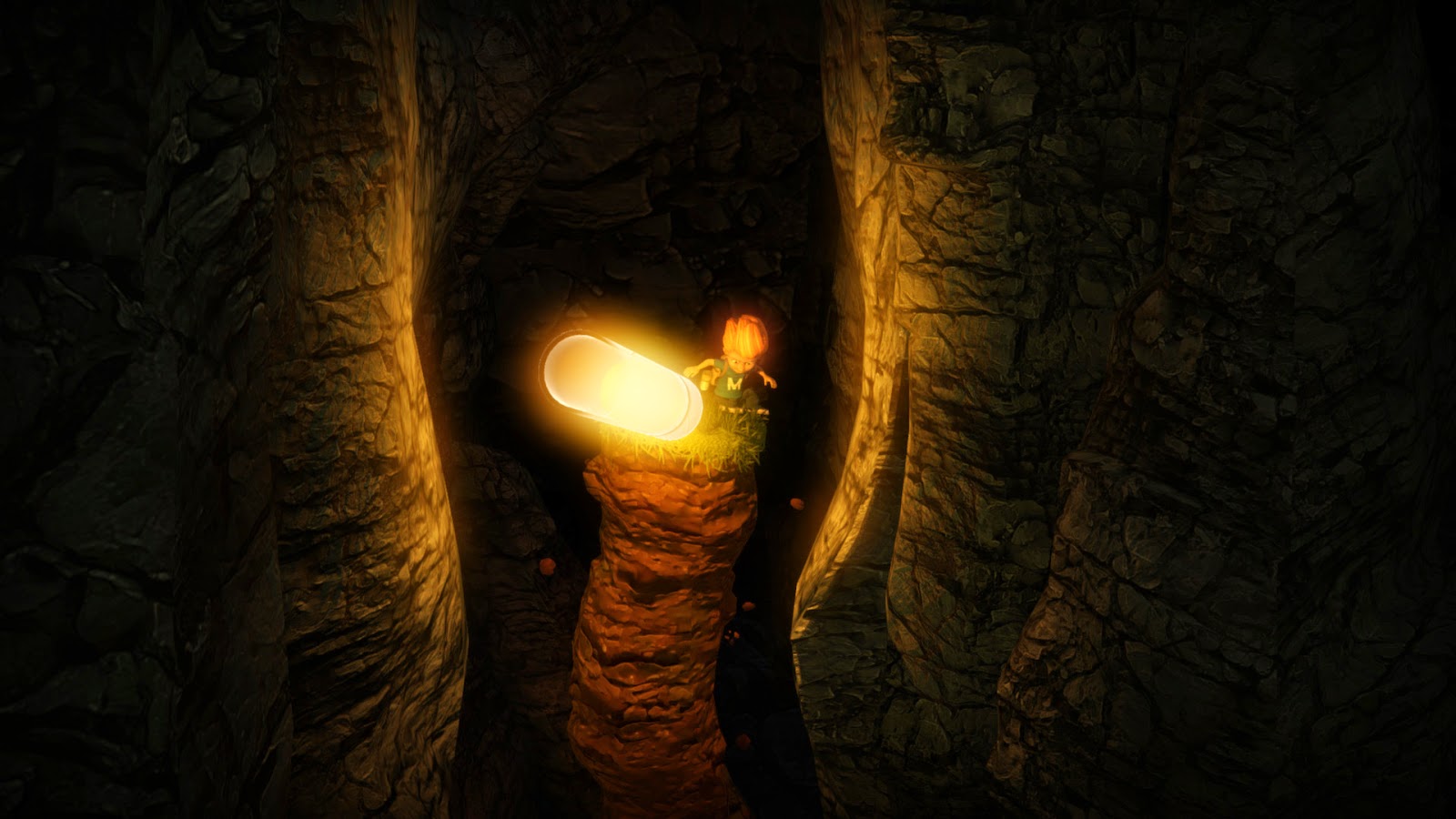 This leads to The Old Woman, The Magic Maker, and then ultimately The Old Woman putting her spirit into the Magic Marker. This. Was. Awesome! Not only does this mystical older woman put her spirit into this magic marker, but she allows you to control certain portions of the earth to create platforms to jump off of, block off enemies as they chase you, and create walls to bounce bombs back at your enemies. As time progresses Max comes across various shrines that allow the Marker more abilities such as creating branches, vines, and… water jets? This last one is awesome and I wish I could do that for fun in the summer… Back on topic!

These various additions to the marker’s power is how the game allows for more challenging puzzles. It also allows for a great deal of creativity through trial and error, as sometimes there is no “right” way from point A to point B. On a handful of occasions I was forced to replay a section and I actually made it through the same point using a slightly different tactic the second time. This sort of open approach to solving puzzles in a 2.5D platformer was really interesting.

Thankfully with a game designed with lots of platforming, perilous puzzles and sometimes traps which definitely work (which I grumble at myself for, because I continued to fall for them), there are frequent checkpoints for your convenience. These are scattered throughout the levels at fairly regular intervals, though there are a handful of times when it seemed like a checkpoint was set just a bit too far back. This would force you into replaying a somewhat long section, making you have to redo some incredible stunts to make it back to where you failed the first time. The difficulty itself isn’t something that is designed to be sadistic, but there are moments when you wonder if the spike in a series of event’s difficulty was on purpose or if you were in a slump.

Max’s adventure has a rather simple story, but journey and distance it convers makes it a far more impressive tale. There are relatively few sentient characters in the game, but the ones that are present are well presented both visually and with their dialog. The interactions between Max and the Old Woman who enchants/becomes his magic marker are entertaining as she assumes the role of a cryptic adviser throughout Max’s journey.

Scattered throughout the levels are a series of “collectibles”. “Collectibles” is within quotations because the more common of the two items is more of an objective than something Max is going to stuff into his back pocket. These are Mustacho’s eye stalks that allow him to see everything that is happening throughout the lands at once. As you come across these, some are easy to get to while others are hidden and require a bit of ingenuity to reach. Once Max does, you rip them out of their bases and throw them away – essentially taking this surveillance system apart one eye stalk at a time. Sometimes these are pretty easy to get at, but there are certainly plenty of these eye stalks that require some out of the box thinking as you have to make clever use of the marker’s powers to reach them.

The second set of collectibles is a set of medallion pieces that mostly seem to be hidden in smaller places that are almost completely off of the beaten path from the main quest. These medallion pieces require a good deal more creative exploration, as they are usually quite challenging to reach, even if you know where to look..

Max: The Curse of Brotherhood is a very well-polished game that succeeds because it does so many things very well. The platforming and puzzle gameplay blend together wonderfully, with enchanting visuals and some entertaining voice acting. It is easy to get lost in this world Max has discovered. One last lesson to be learned from any of this? It doesn’t matter what your sibling has done, don’t read a magic spell off of the internet!