My oldest memories of a platforming game would likely be Adventure Island from the late 80’s (to be followed a few years later by one of my favorite games of all time, Super Adventure Island); a fun, colorful side-scrolling action-y platformer that had dinosaurs! Since those early days I’ve always had a fond place in my heart for the more goofy platforming games out there, steering away from any of the overly realistic games. The Last Tinker: City of Colors aims to be a throwback to classics such as these. 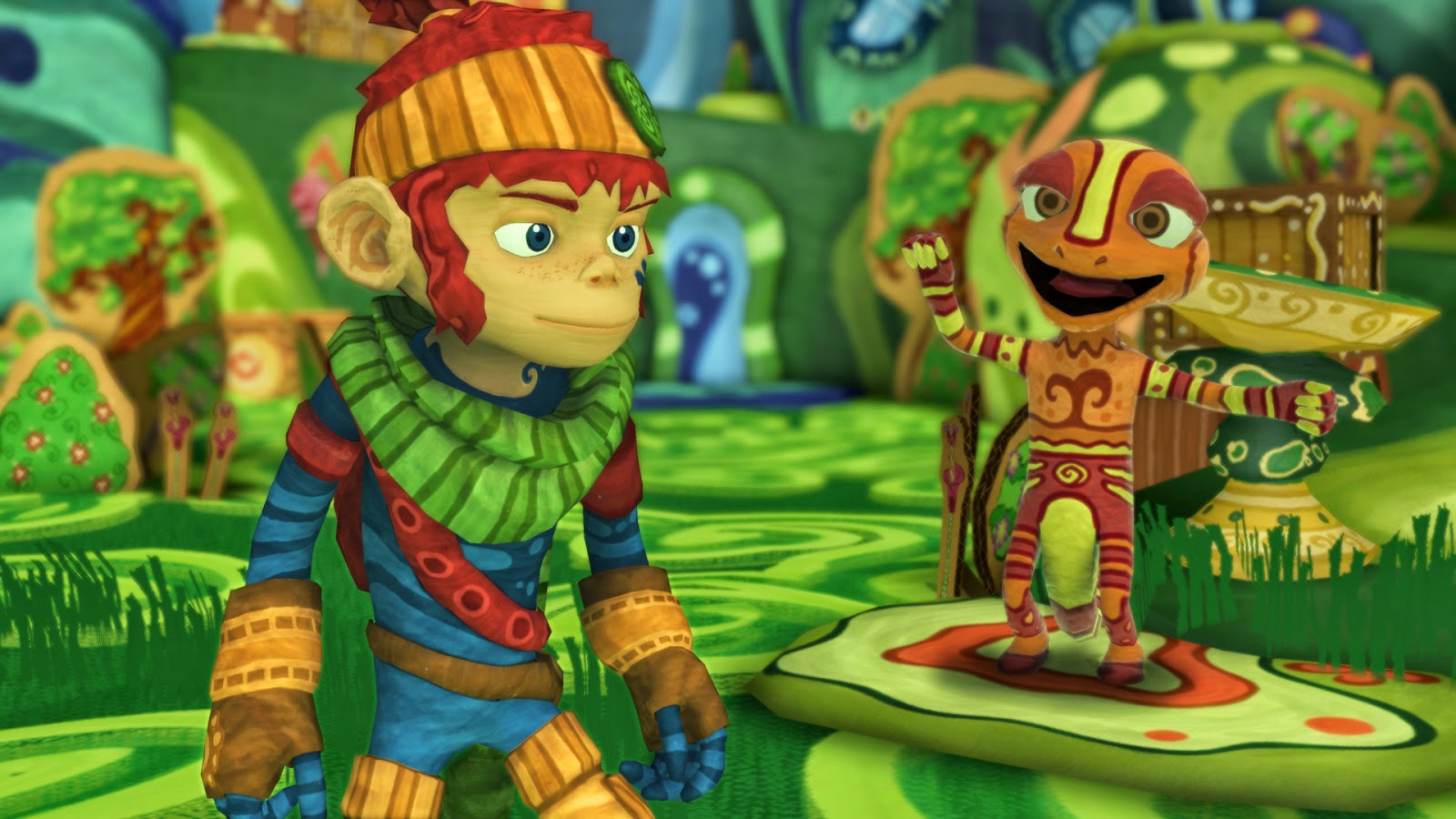 The Last Tinker: City of Colors is a bright and vibrant platforming title with a sprinkle of action thrown in the mix and is developed by the truly wonderful developers at Mimimi Productions. Taking inspiration from superstar classics like The Legend of Zelda, Banjo Kazooie, and Jak and Daxter, The Last Tinker: City of Colors is a fun little adventure set in Colortown, a collaboration of color, creativity, and emotion, where your role as Koru is to combat something called The Bleakness. The Bleakness is spreading throughout the city, introducing fear, segregation and class-distinction into a city that was once fun, friendly, and full of loving characters. You will race through hills and valleys, riverbeds and towns in an attempt to beat back The Bleakness and restore Colortown to its former glory. Does Koru, The Last Tinker in The City of Colors stand up to the classics of yore? 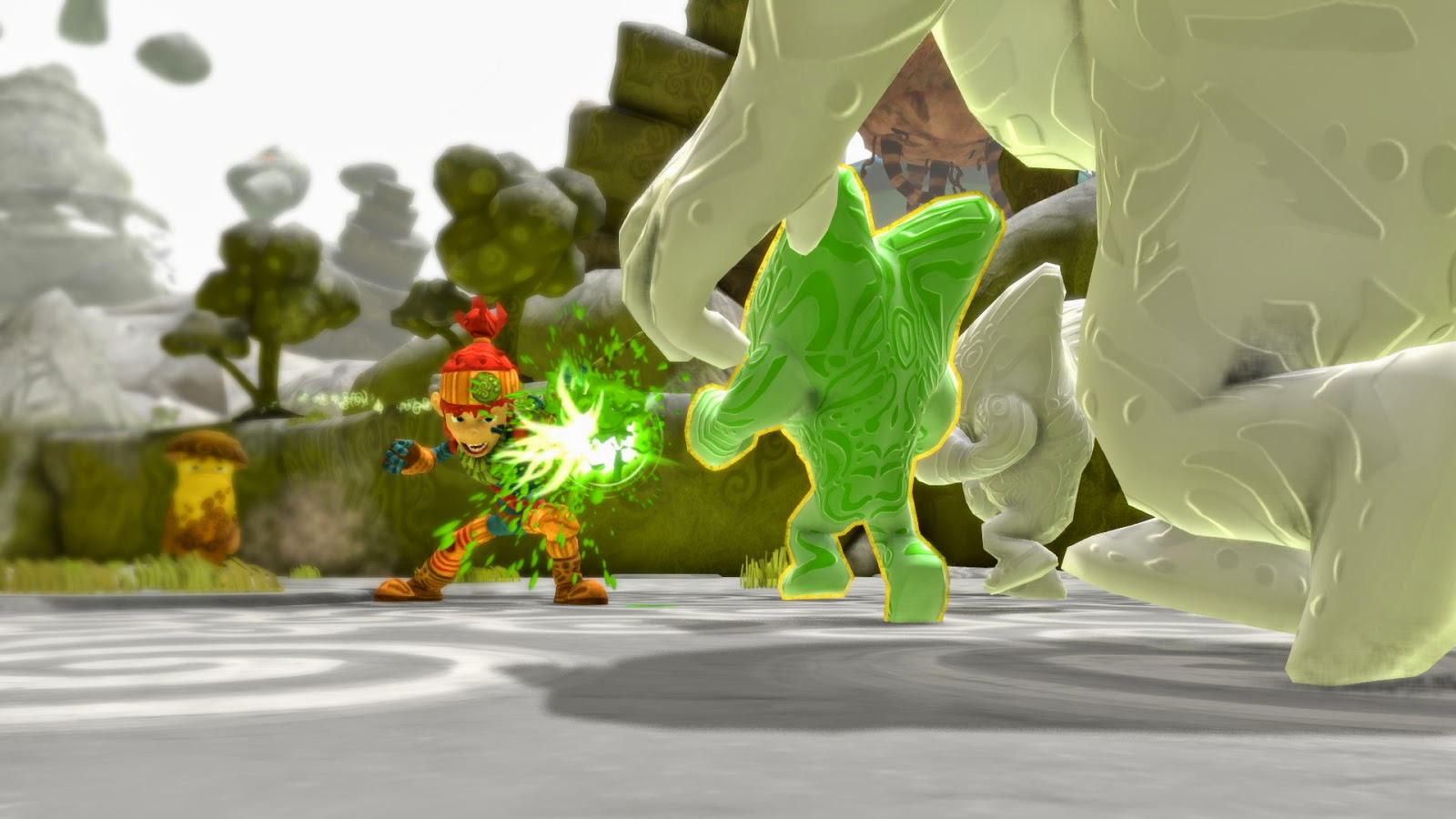 The graphics are great. Colorful, vibrant, and well animated, the particle effects when you bash bad guys, break boxes, or pick up gems are creative, clean, and add a wonderful magical effect to the entire experience. Character designs are fun, imaginative, and fantastical in nature (your character, Koru looks like a monkey!) are well animated and fit so well into the aesthetic of the world of The Last Tinker: City of Colors it is a bit scary; in a good way, of course. The design of the environments are rich, clean, and full of fun little things to watch and see as you run through your various levels / missions, with bright, airy sunshine-filled levels, smog-covered runs and periods taking place at night. The explosion of color on screen may be off-putting to some gamers and given very bright and vibrant world, the lack of any real shading is a bit of a drag since characters don’t have much of a shadow when compared to the rest of the world; however the vibrancy of the world overall more than makes up for it. 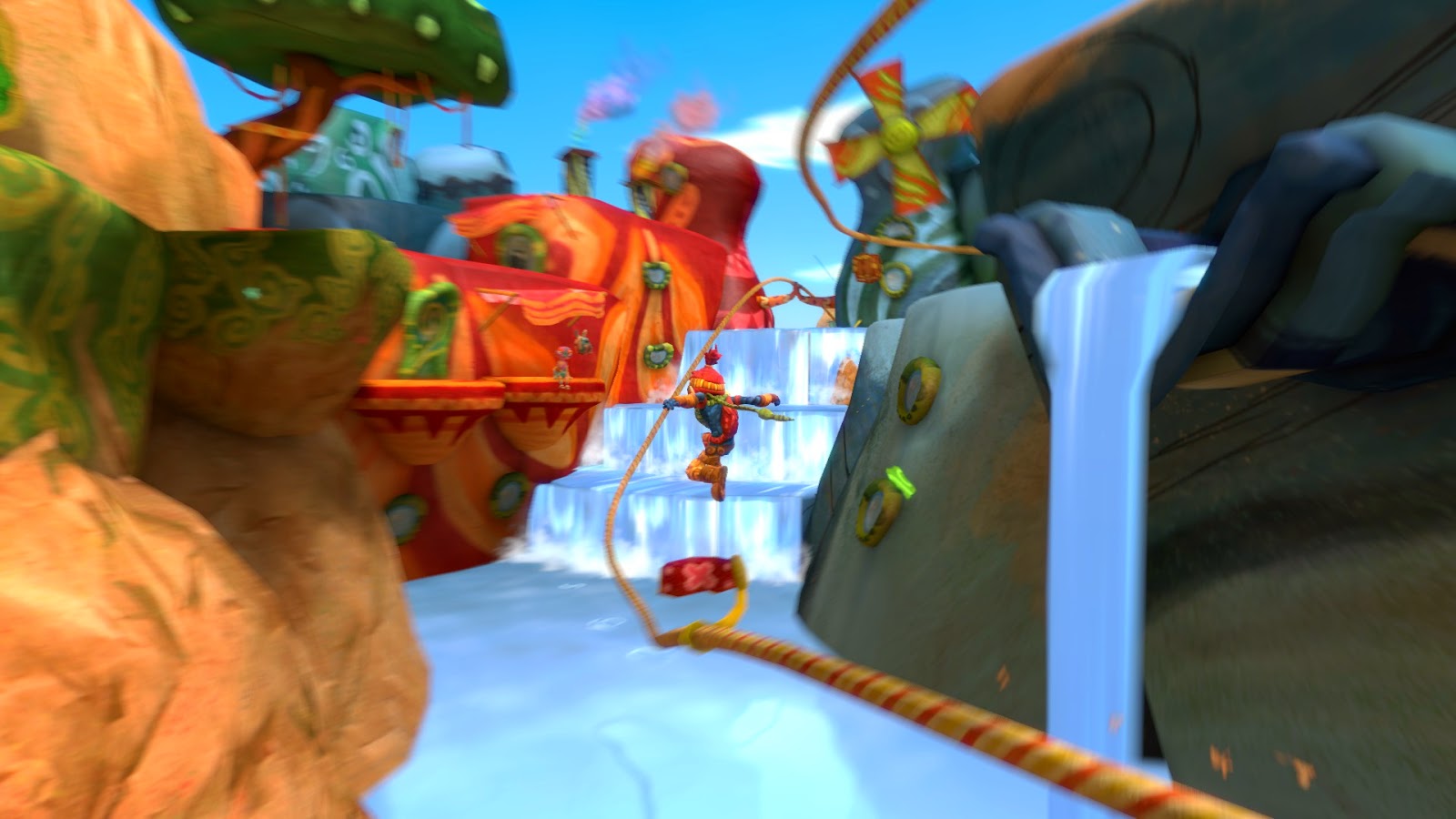 To get it out of the way right up front, a few of the background tracks are the most annoyingly up-beat tracks I have ever encountered in a video game. The overbearing silence of the original Pong was more welcome that a few of the tracks; fortunately the ambient audio and the majority of the soundtrack more than makes up for it. When you are in the different player hubs the area feels alive; various sound effects blanket each section in an appropriate manner and add some depth to the environments. The different effects, running, jumping, smashing, etc. are all clean and static-free while still sounding cartoonish and fun. The odd little noises that each of the characters make fit so well in with the overall aesthetic in Colortown that you can’t help but feel the inner child in you hop about in glee. My 7 year old daughter, while in another room, heard the cheerful, pleasant sounds coming from the TV and was instantly caught up in the sounds and sites that will be had in The Last Tinker: City of Colors. The Last Tinker: City Of Colors is, at its core, a platforming game with a bit of action thrown in. The colorful and vibrant art style in combination with the action are a great homage to the Legend of Zelda games with a focus on platforming. The mix of action and platforming in such a vibrant world is a welcome departure from the more common-place 2D side-scrolling action-platformers that are saturating the market today. The primary goal for Koru is to bring the life back into this segregated and fear-stricken world. Throughout your running, jumping, sliding, and bashing you’ll encounter a number of varying courses, colleagues and enemies in environments ranging from the serene waters around the opening hub to snowy valleys. While combat is a part of the game, the truly pleasing aspect is the platforming and level design; unique environments, speedy rope bridges, and some spectacularly fast motion while zipping through canyons rewards the player with some phenomenal gameplay. 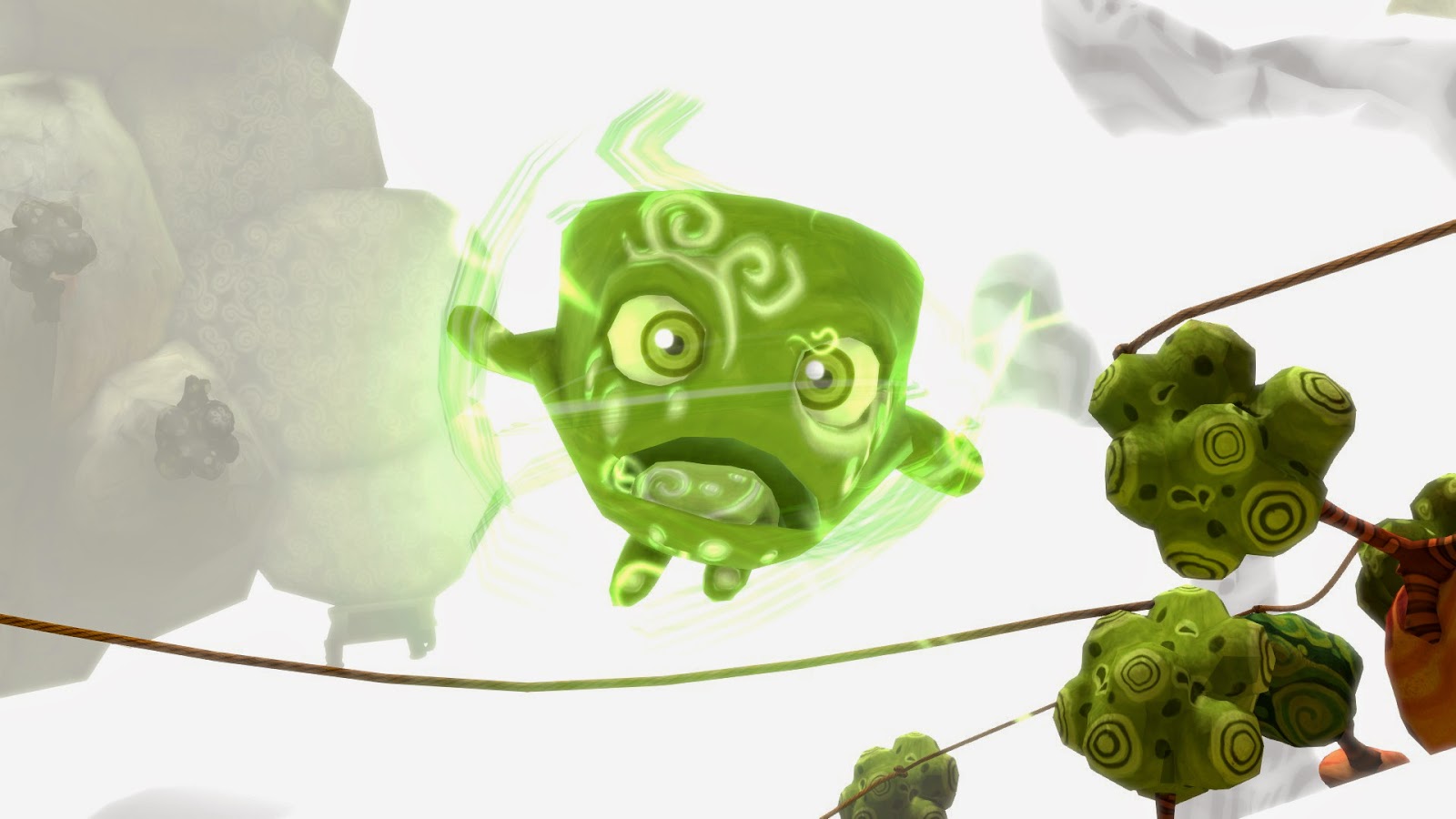 There isn’t much in the way of extras per say, though there are few unlockables though that doesn’t detract from the quality of the game. The environments are open to exploration, where you will find objects needed to continue the story and while fairly linear, there are enough nooks and crannies throughout the levels that meandering through the gorgeous environments is less a chore and more a treat. There not, sadly, any multiplayer contents in the game, though in retrospect I don’t know how it would have fit into the store / lore of the adventure. Adding in additional game modes could prolong the time you spend in Colortown and while the game is well-paced, the time you do spend there does not feel wasted. That very fact is a part of why I enjoyed spending my time in this lush and vibrant world and I felt quite fulfilled throughout the story and the adventure. The colorful and fun atmosphere, the narration of the story and the lore of the world of Colortown creates such a splendid bundle in such a small package that the lack of common features (multiplayer, epic loot, etc.) is not felt. 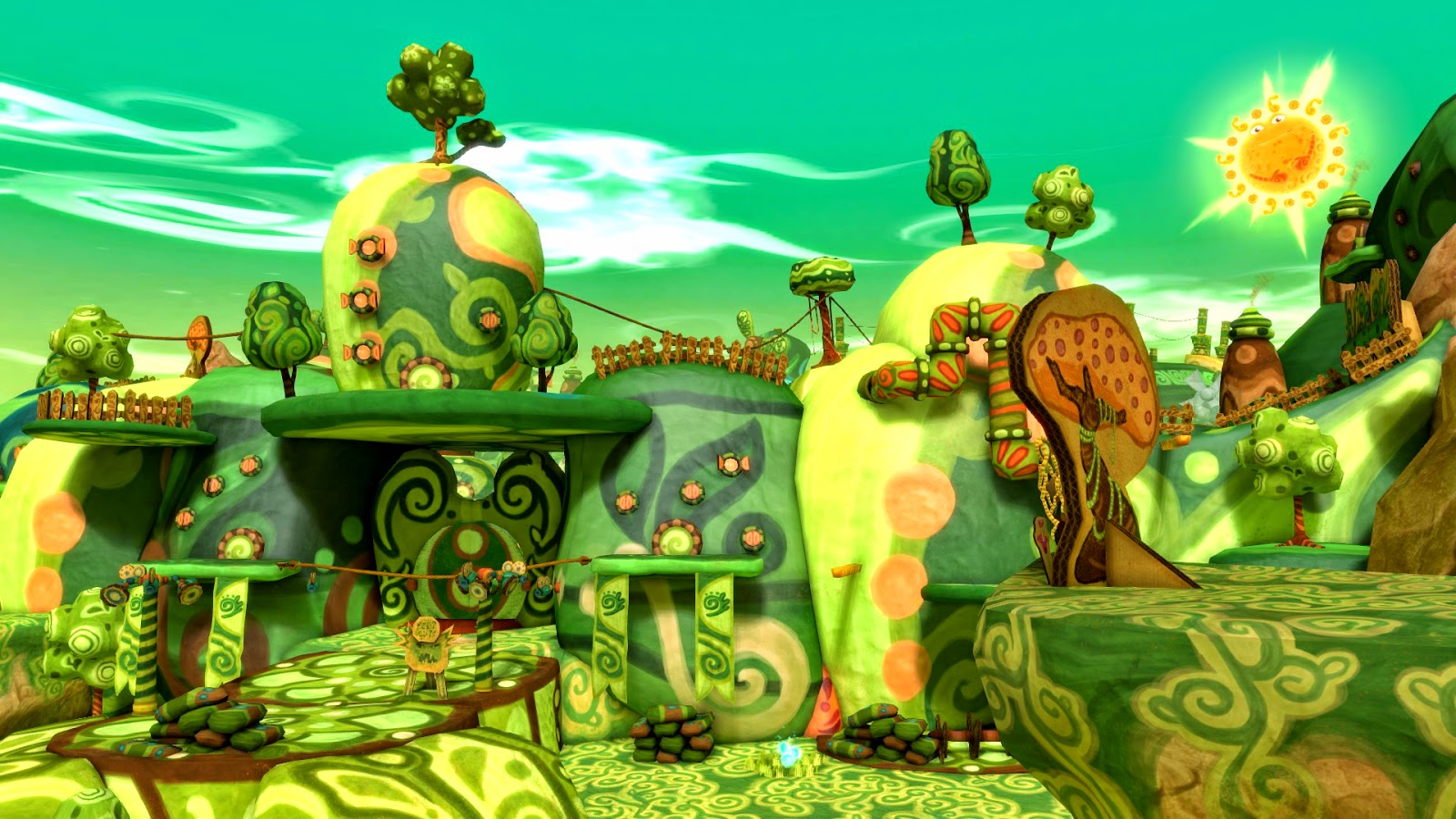 The Last Tinker: City of Colors is a truly gorgeous game; crafted in the image of some of the best games that came out in previous generations and in no way does it do them any disservice. The fun atmosphere that helps the tackling of oppression, feelings, racism, and other real world issues is done so masterfully that everything just fits so well together. My time spent as Koru was splendid and so easy to pick up given that my 7 year old daughter even gave it a go (and loved it!); by no small feat can a game capture both the heart and soul of an old grouch like me as well as my wonderful daughter. There are a few items that struck me as grating, the lack of deep character shadows and a few music tracks that were positively grating is more of a personal taste rather than a real downside to the game itself, but it was noticeable enough that it needed to be brought up. Throughout the story I never once wished I could hop in with a friend to run about Colortown, so well put together was the single player experience. The overall lack of multiplayer or ‘extra’ content allowed the developers to go through and solely focus on what is important, the experience itself. The Last Tinker: City of Colors will certainly be a staple install on my computer for some time to come, allowing me to drop into the beautiful, vibrant world that is Colortown and its surrounding vista. A truly fun experience that everyone from childhood to adulthood should experience.