comments Share
You are reading
The Wolf Among Us: Episodes 1, 2 and 3 – PC Review

The following list has two things in common: Grim Fandango, Monkey Island, Maniac Mansion, Kings Quest, Full Throttle, Sam & Max, and Leisure Suit Larry. Certainly, they are all well known adventure games, but it’s also a list of games that I’ve had an extremely hard time getting into – if I even played them at all. These all came out at a time in my life before I was into PC gaming, and after my gaming preferences had already fallen in line with more interactive experiences. And I feel like I wasn’t alone in my opinion, as there was quite a long stretch of time where these types of games fell out of favor. In the last few years, there has been a modern resurgence of the format. We’ve had HD re-releases of Monkey Island, brand new sequels to Sam & Max, and completely new experiences like Machinarium, Gemini Rue, and Kentucky Route 0. All of these new releases are giving someone like me a second chance at the adventure game genre as a whole, and I couldn’t be more pleased with the selection. 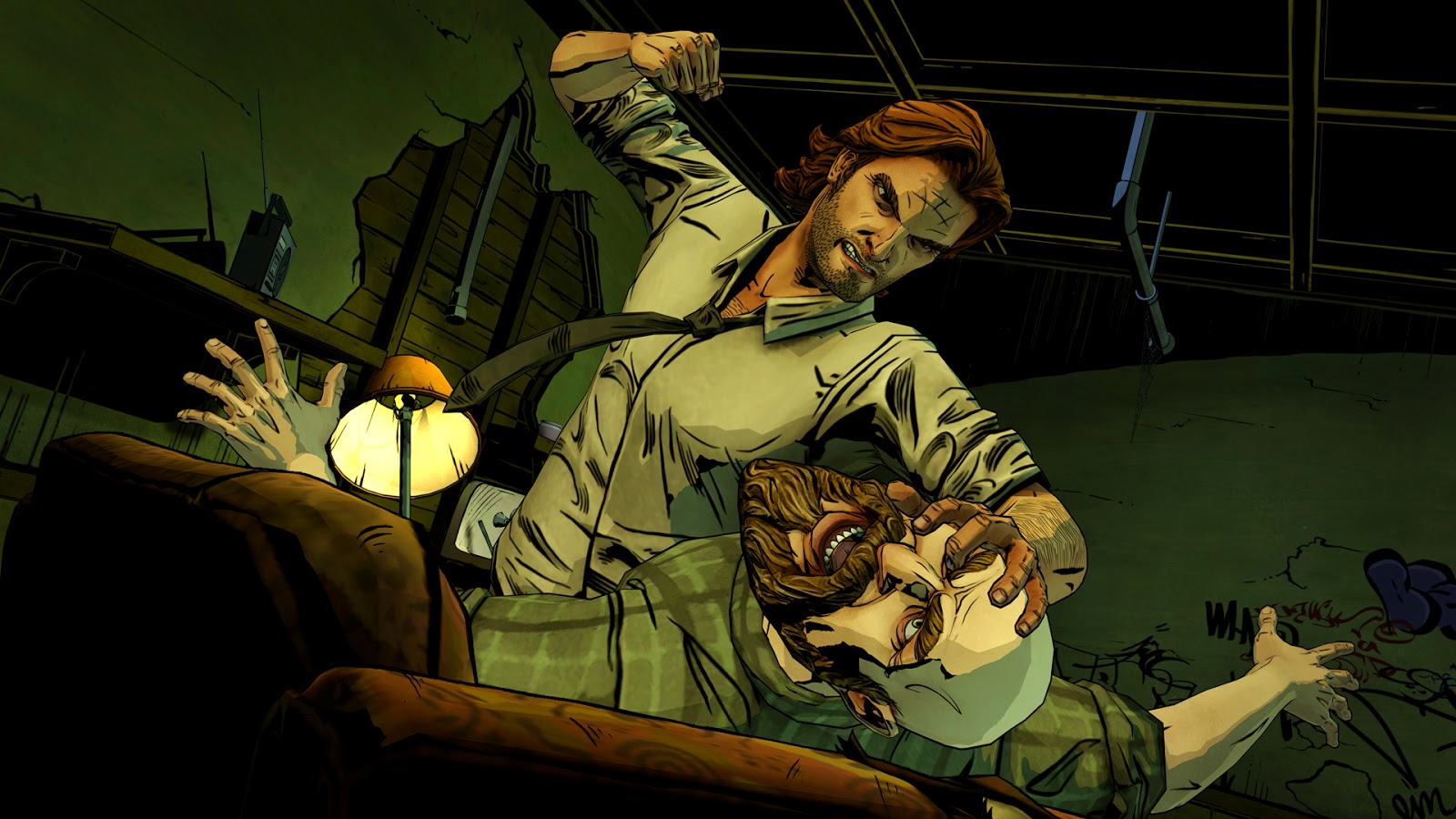 Far and away the most recognizable developer in the space is Telltale Games. There is an impressive stable of games under their belt, including the Monkey Island and Sam & Max reboots, as well as some new tie-in games like Jurassic Park, Back to the Future, CSI, and Law and Order. Telltale also had a couple of smaller releases in the form of Hector: Badge of Carnage, and Puzzle Agent, that were delightful bite-sized experiences that dabble with more traditional mechanics. However, it was their The Walking Dead series which really pushed the genre into a new era, artfully blending 3D character control, quicktime mechanics, persistent story choices, a comic book art style, and fantastic story into an experience that I couldn’t put down.

Using the same engine and base mechanics of The Walking Dead, Telltale’s latest offering is a 5-part series called The Wolf Among Us. Tied directly to Bill Willingham’s Fables comic series, the game is set in a small section of New York City called Fabletown. A fitting name, as the inhabitants are the very characters of fairy tale and tall tale, exiled from their original homes and forced to live in hiding amongst the “Mundies,” or mundane humans. You assume the role of Sheriff Bigby Wolf, the now-reformed Big Bad Wolf tasked with keeping the fables safe, at peace with one another, and their identities hidden. Pulling from a number of different (notably, all public domain) sources, you encounter Snow White, Beauty and her husband Beast, Ichabod Crane, Blue Beard, The Little Mermaid, Grendel, Trolls, and many more. Their fairytale lives often hundreds of years behind them, and as they struggle to make ends meet in Fabletown, there is a dark and gritty tone that is a stark contrast to their origins. As a gruesome murder shakes up the community, it is Bigby’s job to solve the crime and restore stability via a very film noir inspired story. 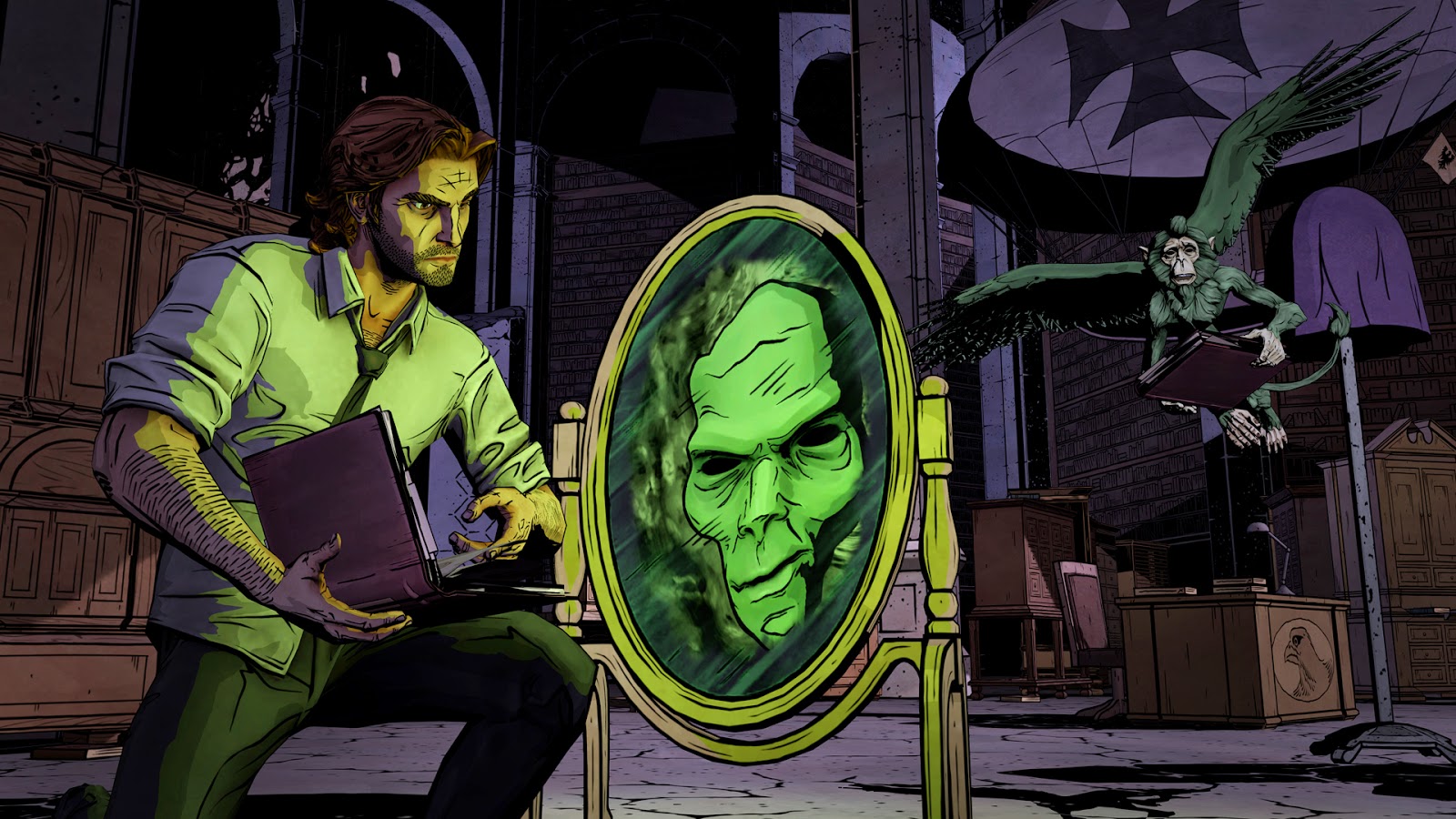 It is immediately evident that this game is gorgeous, and a refinement on the foundation that The Walking Dead laid. Although the game is presented in a 3D space, a static screenshot conveys the same attention to detail and character as a comic book panel. Hard shadows are cast on the characters and environment, playing nicely with the equally hard detail lines on their models. Where The Walking Dead could come across as though it were through a foggy lens at times, or that a character is presented as a 3D model first and comic inspired representation second. The Wolf Among Us demands that you notice the details and nuance. This effect is compounded by the fantastic subtlety of the facial animations. Anger, fear, disgust, rage, and passion are all conveyed by a slight eyebrow raise, a furrowed brow, a glistening eye, or an unsteady gaze. A tensely quiet exchange can say more than a well written line, and Telltale was sure to utilize that when applicable. L.A. Noir may be the current pinnacle of hyper-realistic human expression, but where that can suffer from the uncanny valley, the style in use here pushes the limits and made things that much more impactful.

The first three episodes run just under 2 hours each, and they all hit on the same set of core mechanics fairly equally. A majority of the episode is comprised of exposition or conversation, which is typically very well written voice acted, and used to progress the story beats along. Your parts of a conversation are propelled forward through one of four responses, with one of which always being the choice to remain silent. The response typically must be made quickly, as a timer counts down. In some situations, your response will directly impact someone’s mood towards you, with a notifier that their character will remember this interaction in the future. While these sometimes pay off, it is more often than not a simple reference in a cutscene or short character reply – more of a wink and nod then changing the course of the river. 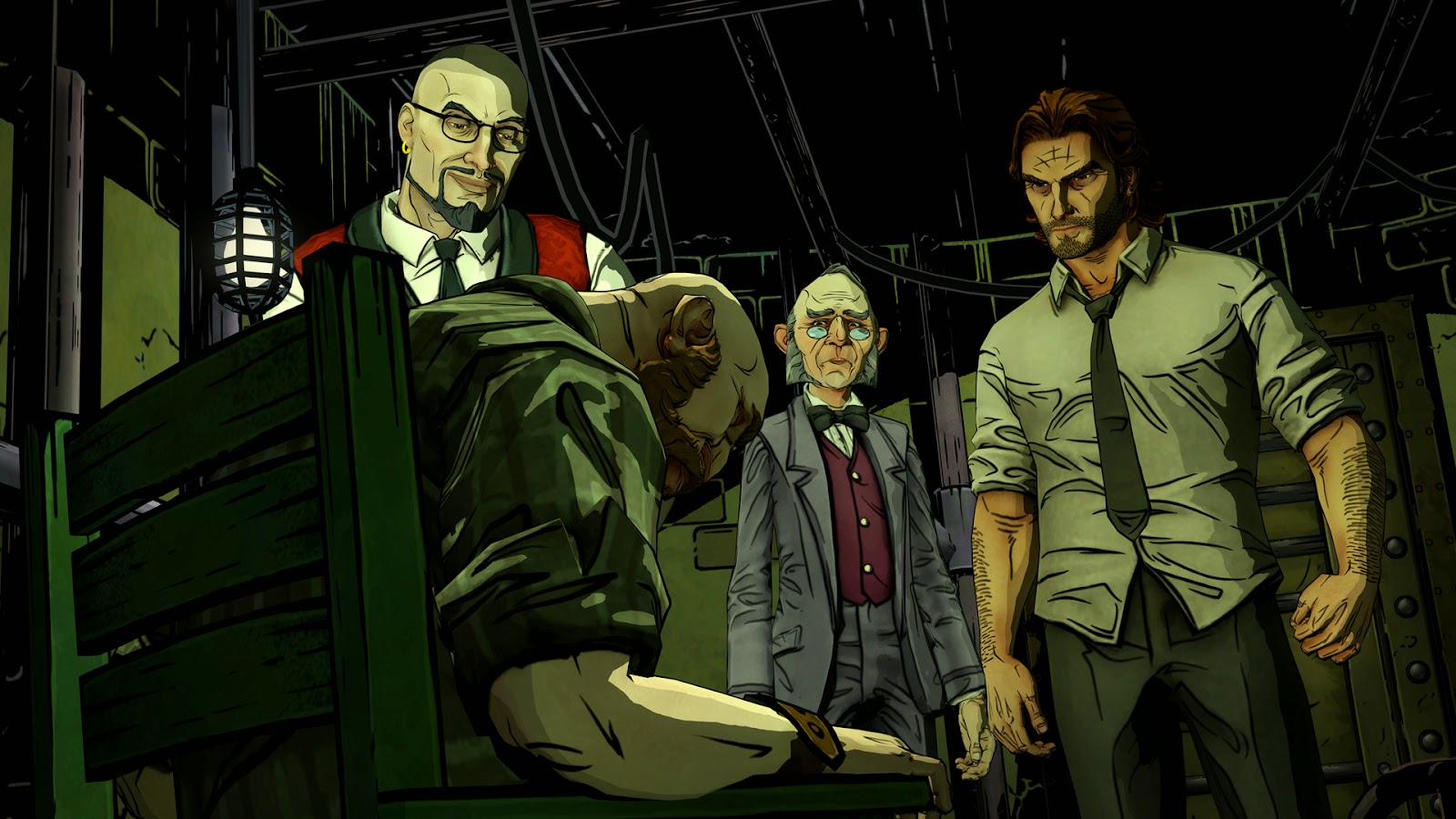 Then, there are one or two confrontations that are played out via quicktime events. Dodge left to avoid the lamp, dodge right to avoid the chair, then move the thumbstick over your attackers hand and press the right trigger to grab it before you’re hit. Mash the A button during a struggle, rinse and repeat until the action is resolved. I never found any of these scenes all that difficult, as they are generous with timing windows and second chances. While it’s nice to get the adrenaline pumping from time to time, it’s fairly predictable when one of these moments will take place, and they’re a bit too simple. During these scenes, some of the wonkiness with prop usage and character animation can shine through. A character briefly picking up a lamp or shotglass will have it shake and jerk around in their hand as they swing it forward. Or the act of throwing someone into a picture frame on the wall can come across as very wooden overly choreographed. Thankfully it’s happening so quickly, the quicktime events are distracting you, and the overall style is just so darn engaging that these things are easy to overlook.

Finally, each episode usually contains a brief investigation scene or two. Bigby enters a room that contains some bits of evidence to confirm his current leads, and you have him move about the room investigating objects. In a couple instances, the game even makes you choose what order you wish to investigate these types of locations, and your choice can have very real impact on the outcome. The most rewarding of these investigations are when you have another character in the room with you. As you start to piece the evidence together, someone like Beauty or Mr. Toad will prompt you about your working theory. If you’re actually paying attention to the clues, there’s a right response to these questions, and the game will point out that you’ve made a convincing argument. It’s not much, and the dots are never all that far apart to connect, but it’s still a gratifying and validating result that forces you to stay engaged. 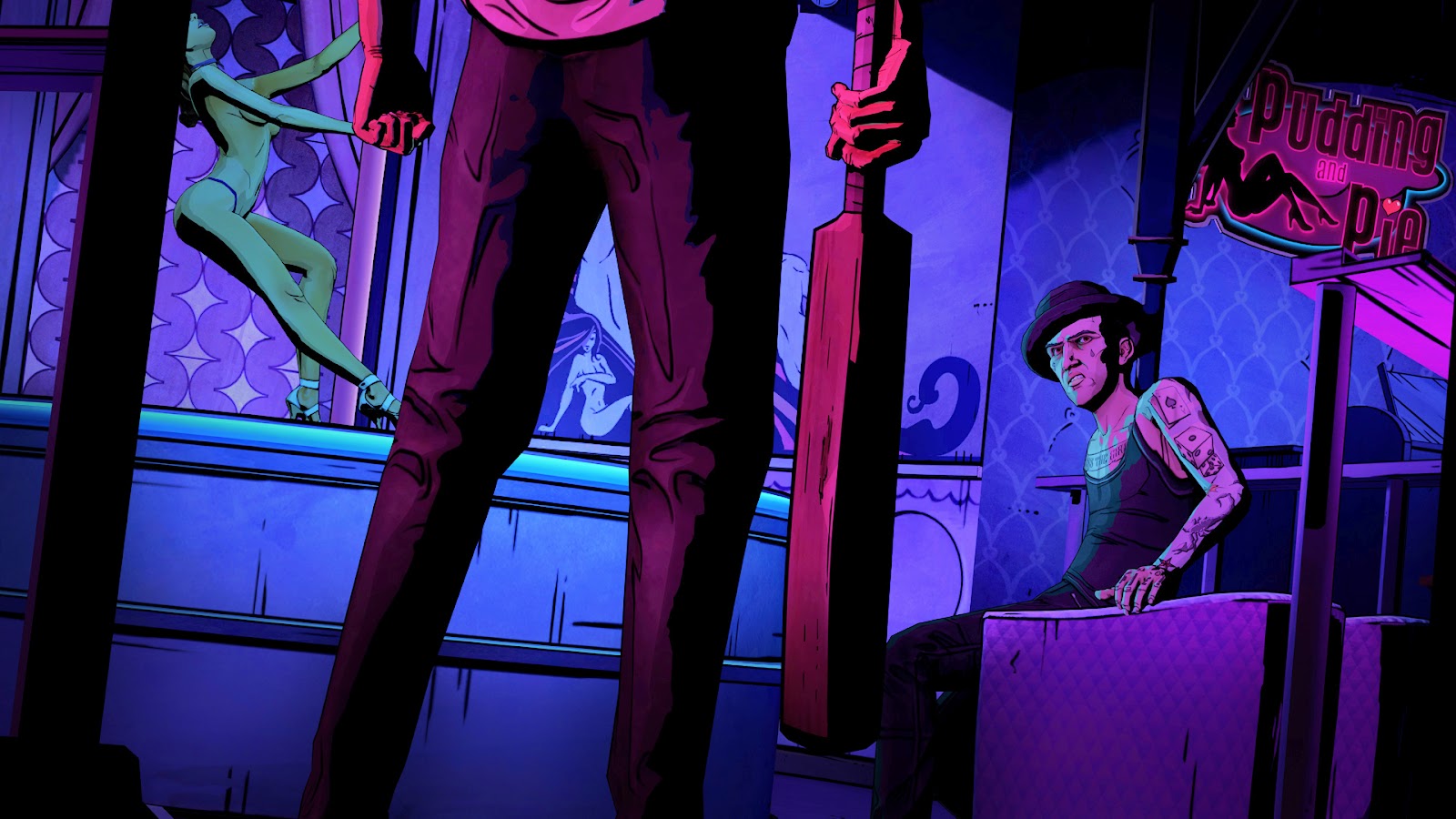 As noted earlier, the voice acting in this game is more often than not quite good, and the short musical themes are very effective at conveying the tone. Bigby Wolf and The Woodsman are both gravely voiced man’s men with chips on their shoulders. Ichabod Crane is a panicked and wiley coward. Snow White and Beauty are elegant and graceful women that refuse to be broken. What’s a real shame is the foley work for the games sound effects. Footsteps, closing doors, breaking glass, flapping wings, and nearly every other sound effect in the game feels like an afterthought. As though the audio designer realized in the last week that they hadn’t added any of these sounds, and they were forced to hastily throw in some unmixed stock sounds. Jarring and noticeable, yes, but they still roughly and effectively convey the action.

At the end of my 6 hour session of playing through these first three episodes, I was left craving more. With an unclear release schedule for the last two episodes – only a vague “Summer 2014” is listed on Steam – I may find myself dipping into the comics to get a fix. It may seem like we are in a time where dark takes on fairytales is an easy genre to be overdone, thanks to TV shows like Grimm and Once Upon a Time, The Wolf Among Us gorgeously presents and respects the source material, and conveys a compelling story that ends each episode with a twist and cliffhanger. We’ll be sure to have a full review and our final thoughts once the full series has been released.