Titan Attacks! puts you in the role of the last surviving tank commander on earth as alien invaders bombard the last bastions on the planet. Your mission is to turn back the invasion and protect humanity. For those of you who were around in the 80’s and 90’s and spent your evenings and weekends at home experience a nostalgic trip like no others; inspired by the likes of Galaga and Space Invaders, Titan Attacks! is a truly special homage to the quarter-eating arcade games of yesteryear. 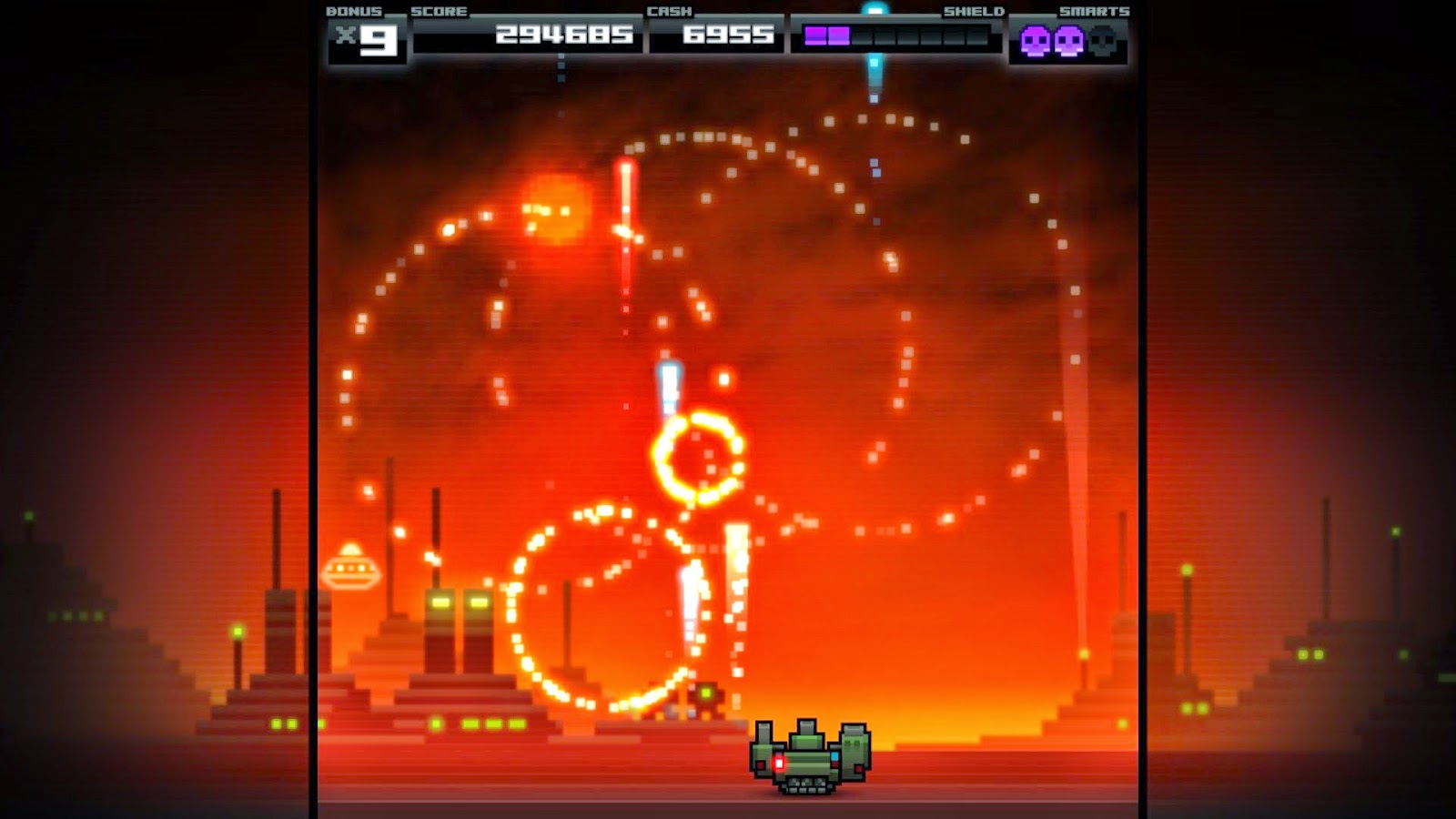 For those new to the style and game play, you’ll find that your role as the sole surviving tank commander an exciting one, vanquishing large and small foes alike, upgrading your tank with the best that humanity has to offer as you stand firm against wave upon wave of enemies bent on destroying you, the only thing that stands between them and total domination. With over a hundred levels full of enemies that zip, zoom, and hurl about the screen as they attempt to destroy you, as well as five giant boss battles awaiting you at the end of each of the games five worlds (Earth, the Moon, Mars, Saturn and finally Titan). Does Titan Attacks! successfully bring the arcade-style combat successfully to the PlayStation 3? Read on to find out. 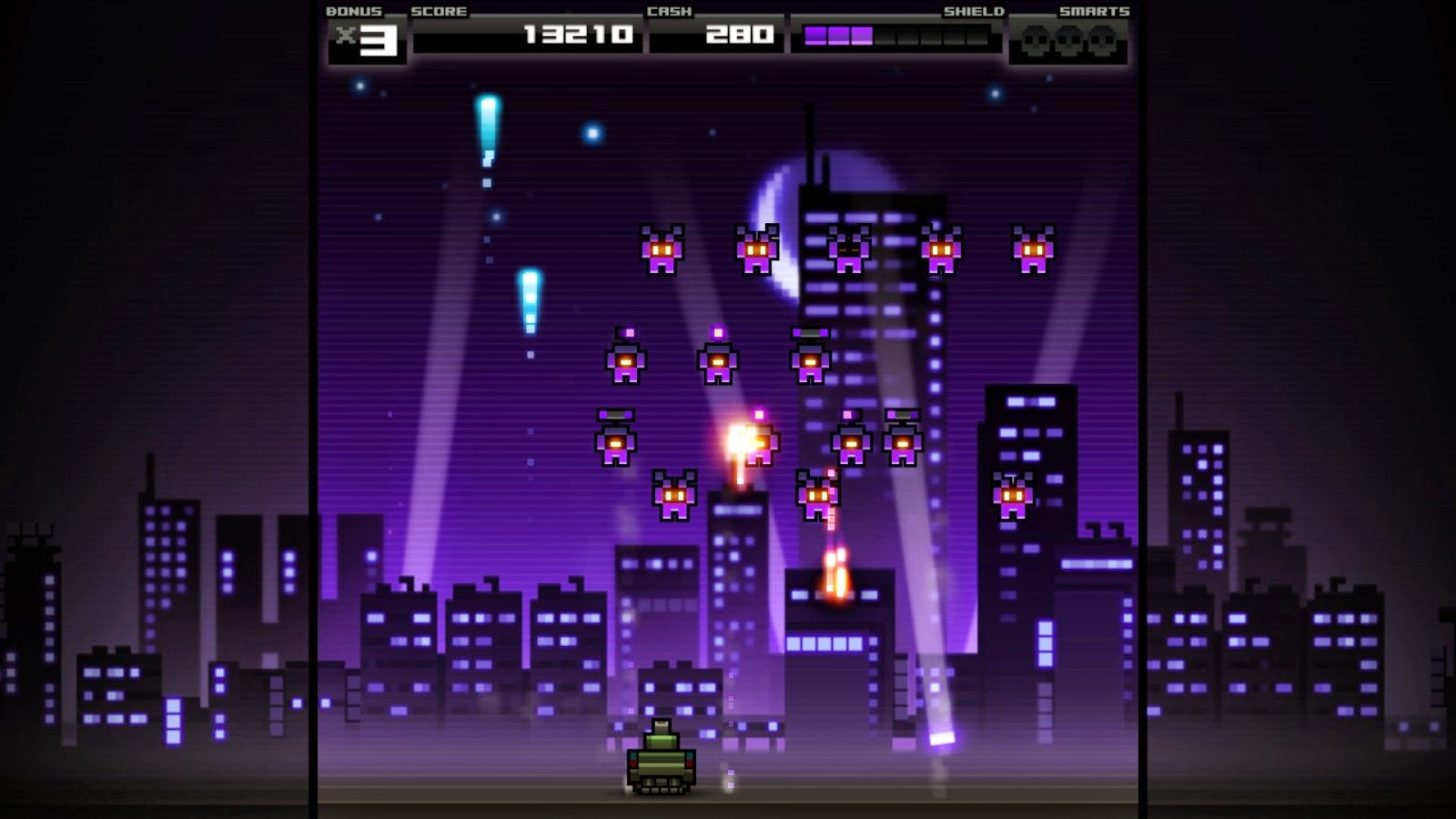 When you load up the starting screen you are greeted with a giant throwback to the arcade games of old; the blinking “Press Start” option is reminiscent of the old “Insert Coin” line from the arcade cabinets from the 80’s. It is the first, and most prolific factor that contributes to the overall feel that Titan Attacks! is straight out of the arcade halls of old. Once you feed in your token (read: press start) you are immediately thrown into the mix, defending Earth against little 8-bit / 16-bit invaders as they hover above you firing lasers and bombs in an attempt to destroy you. The framerate is high, moving at a constant 30 FPS with no hiccups, slow downs, or pop-ins as the graphics, while simple, are crisp, clean, colorful and vibrant. There aren’t any real particle effects as we know them, as the explosions and different effects are all lovingly crafter in a manner that would have them right at home in Gradius or R-Type from the 16-bit era. 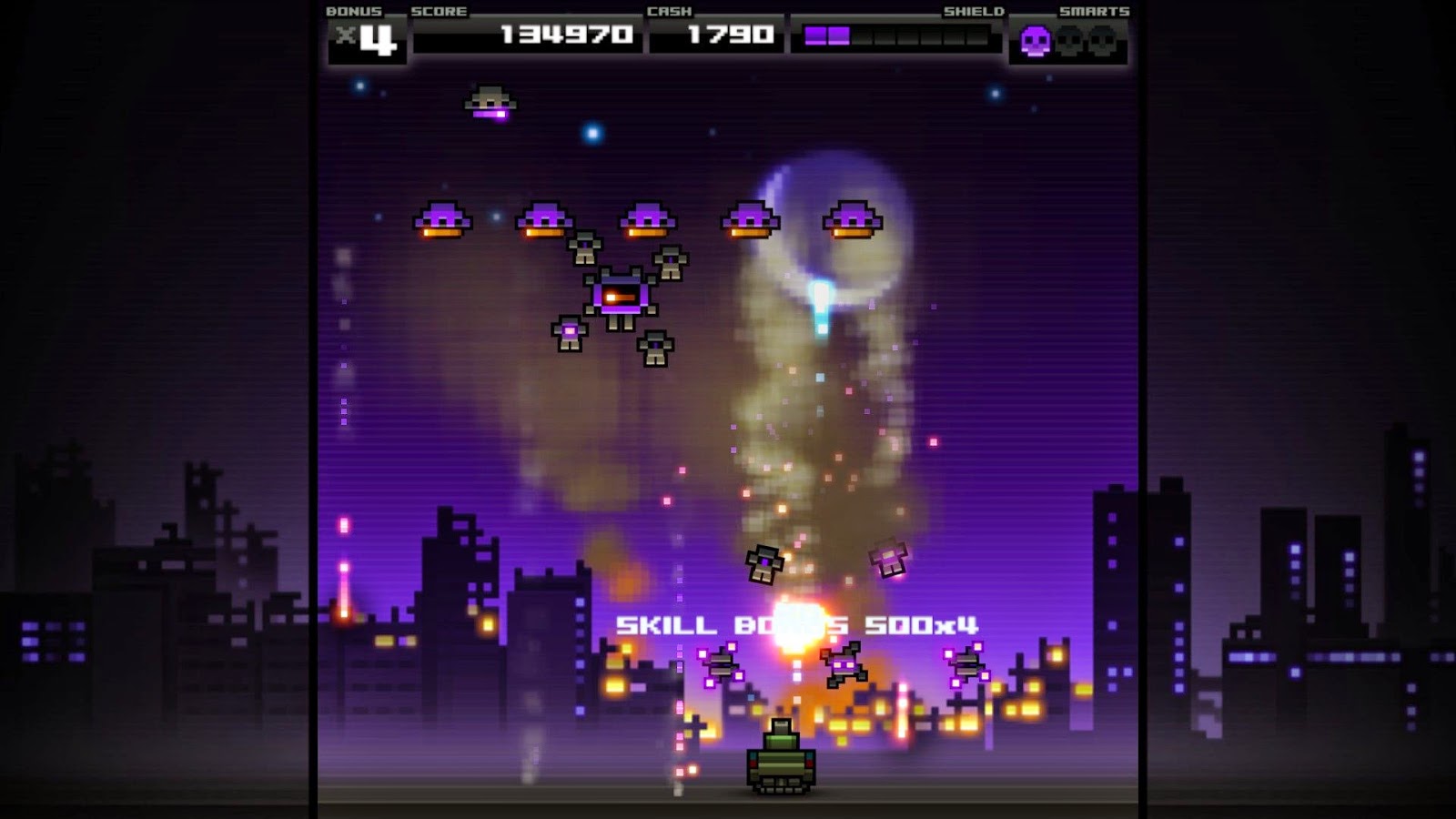 The background music is well crafted and fits right in with the 80’s/90’s arcade motif, if a little more modern in style. Each track, while sounding significantly better than a 20 to 30 year old counterpart, would fit right at home in an old Blasters or Aladdin’s Castle (old arcade halls) and really hits home with the fact that you are playing a game that has been lovingly stylized after those old cabinets. Tense at all the appropriate times, and smooth, consistent, and welcoming during the lulls between levels, the music couldn’t be better. There were plenty of times throughout Titan Attacks! where I felt the overwhelming urge to listen to some White Snake, Poison, or Guns ‘N Roses to complete the fully immersive experience. The lasers, bombs, and odd little sounds are clean, crisp, and satisfyingly “pew pew bang boom kapow laserbeams!” that again, would feel right at home in a game such as Missile Command or even Arkanoid. Overall the auditory experience, with no clipping or static in the playback, is a delightful experience, if not the deepest. 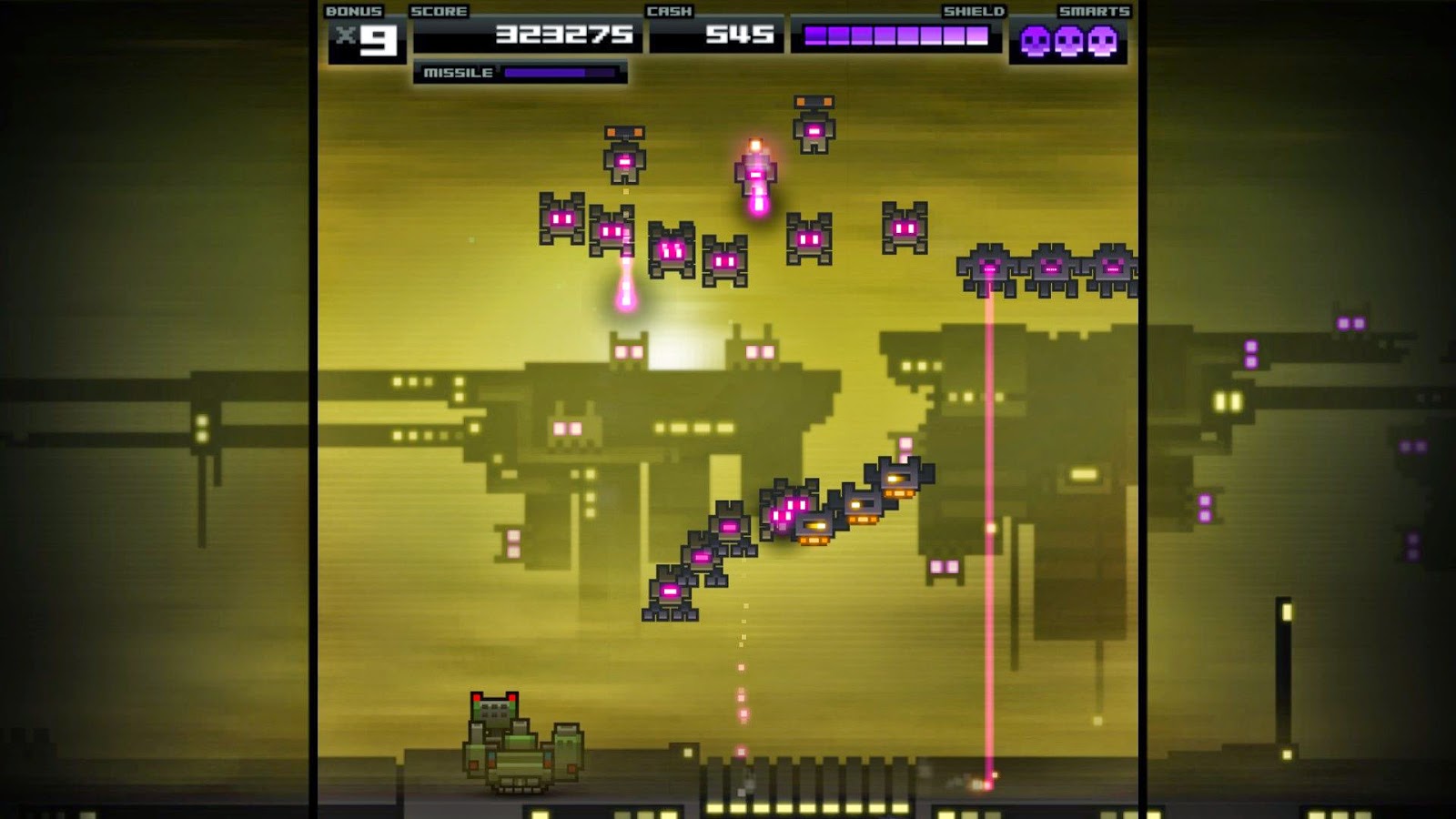 I know I have stated a number of times that this game would fit right in with classic arcade cabinets and I cannot stress that enough as it is a part of the absolute charm of Titan Attacks! The left-to-right flow is fast, consistent and excellent fun in that it restricts the complexity of your movement and it allows you to focus on crushing your enemies. Button assignments are simple since you could, hypothetically, play the game with a joystick and only 2 or 4 buttons (arcade cabinet style!), so anyone can pick up and play the game. The very essence of Titan Attacks! is true to the arcade visage; every bit of it feels like you just dunked a quarter in the slot and you are off to beat your best friend’s high score. The variation in enemy types and abilities, added to your own skill and upgradeable tank, keep the action flowing through the level until the slight pause before the main boss fight, which is then an onslaught of big, bad, boss battle goodness. 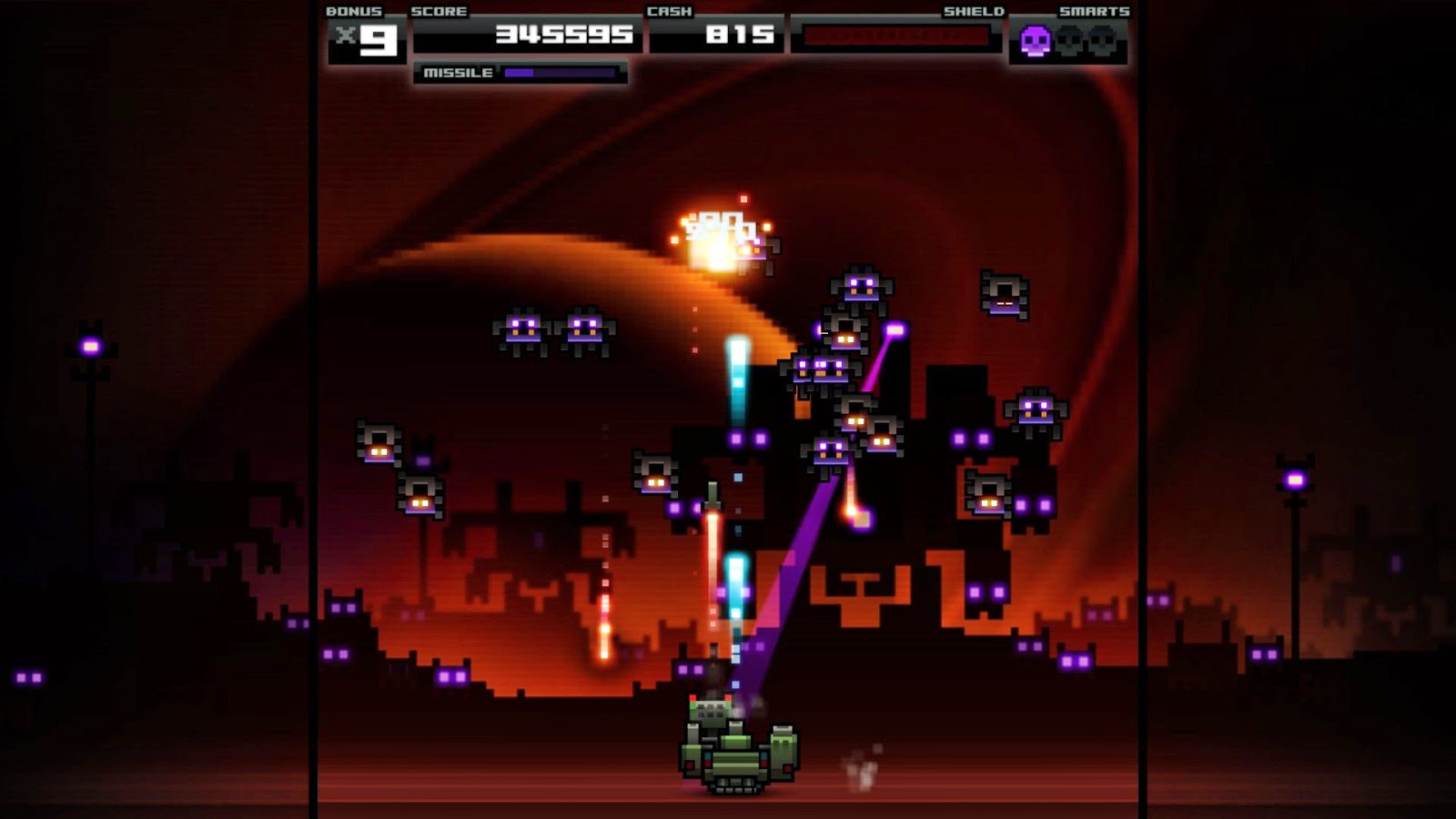 For a game that is relatively simple on the outside, Titan Attacks! packs a number of features that bring endless enjoyment. You will have the ability to earn money as you go which you can then spend on upgrades, or replenishing your shield, between levels. Upgrading your tank or purchasing one-shot super weapons will certainly get you through some of the tougher spots, I found myself pumping up my shields to the maximum as well as ensuring I had the upgrade for the amount of bullets you can fire. These two upgrades alone will serve you better than a single super bomb more often than not. In addition to the upgrades you can purchase, the global / online high scores leaderboard will feed your competitive side as you try to go through and beat others playing Titans Attack! Beyond the highly competitive score-beating and the upgrades you will find yourself engrossed in over 100 levels of pure arcade action. 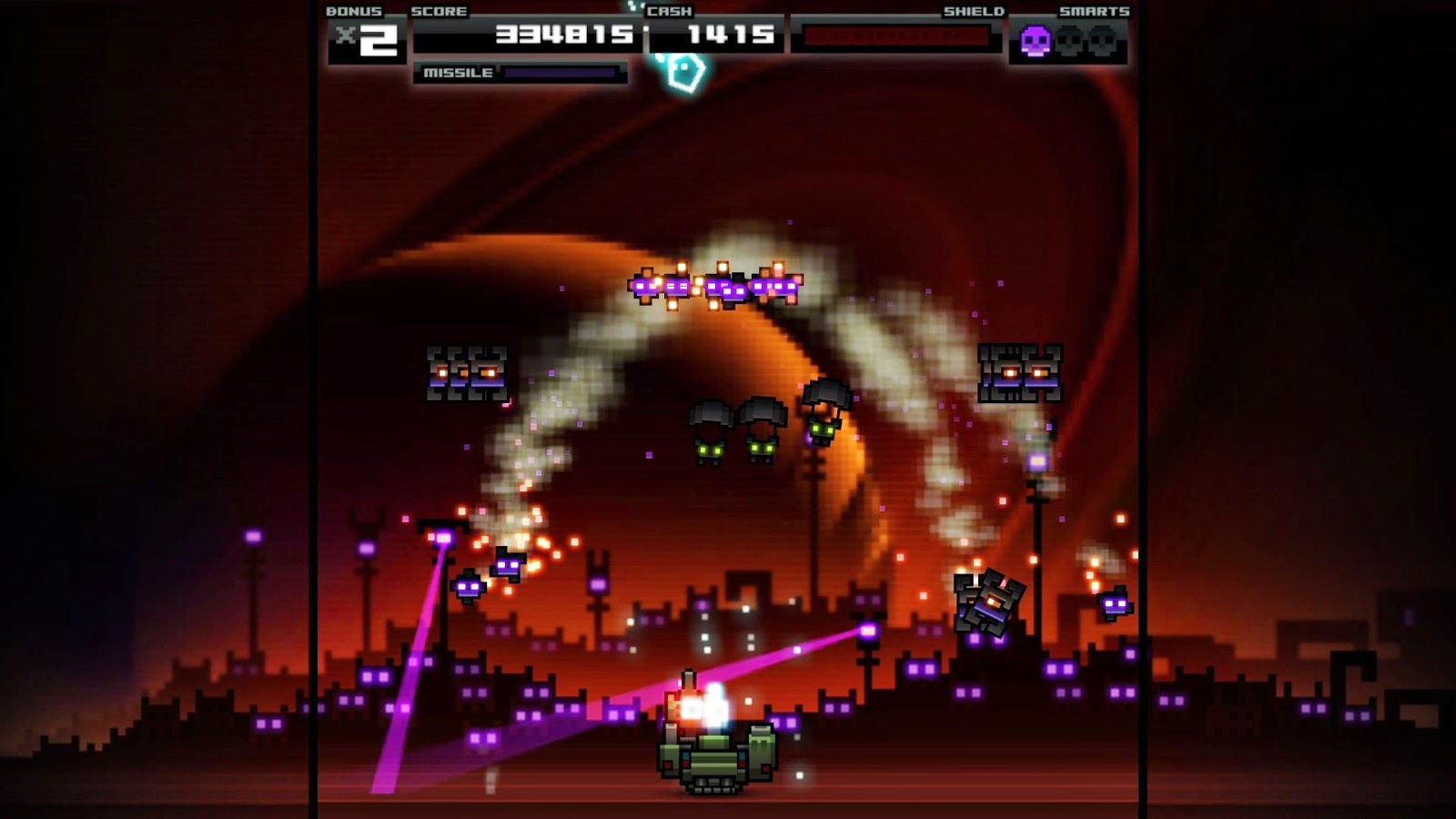 I had a blast with Titan Attacks! It brought me back to a time when saving up the allowance to exchange my hard earned cash for shiny gold tokens (or feeding those bills into a quarter dispenser) to then go wait in line behind all the other kids that wanted to get their game time in. From the initial loading screen to the music, Titan Attacks! is a lovingly crafter homage to fans of arcade shooters and is wrapped up in a package that nearly anyone can pick up and play. There were plenty of times, particularly boss battles, where I yearned for a fog machine, stale fries, flat soda, bad music, horizontally striped clothing, and big hair throughout my time as the sole surviving tank commander that is tasked with taking the fight to the invaders.

There are few things that I would want to see changed, though I did find myself wishing for some sort of true multiplayer support, though I’m not sure how that would have fit in with the lore of you being the “last surviving tank commander” but it could have worked. While the graphics are fresh, clean, crisp and responsive, a recent flood of games with the well-aged 8-bit and 16-bit graphics style is beginning to suck the life out of the whole look. There are plenty of graphical opportunities throughout the game to be had where there could have been a change in style (adding true particle effects) that could have made a big impact on the overall appearance of the game. I truly appreciated the nostalgic factor that Titan Attacks! brought to the plate and it was certainly a home run in my book. 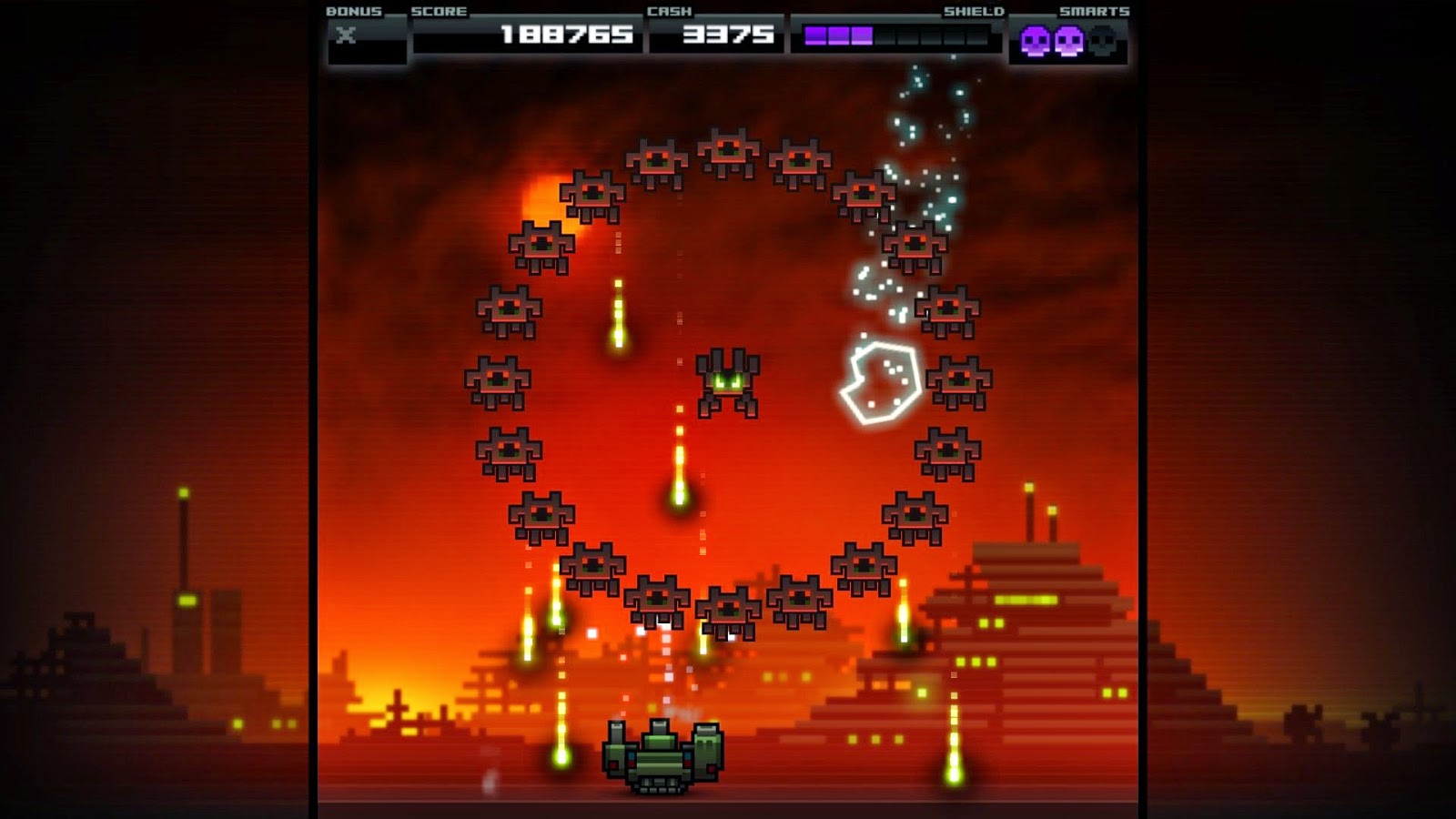 Posted by Robert
Follow:
Hardware Specialist—Currently a reviewer for Chalgyr's Game Room covering all platforms
Previous Article Some new screens for Mugen Souls Z and Hyperdimension Neptunia: Producing Perfection
Next Article MechRunner – a look at the art of the game