AirRace Xeno is a simple enough title that does a good job of simulating speedy futuristic racing, getting most things right and very few wrong along the way. It is not the most spectacular game of its type, and if you have a prior AiRace title in your library it may not feel all that different, but it is hard not to enjoy the ride while it lasts. 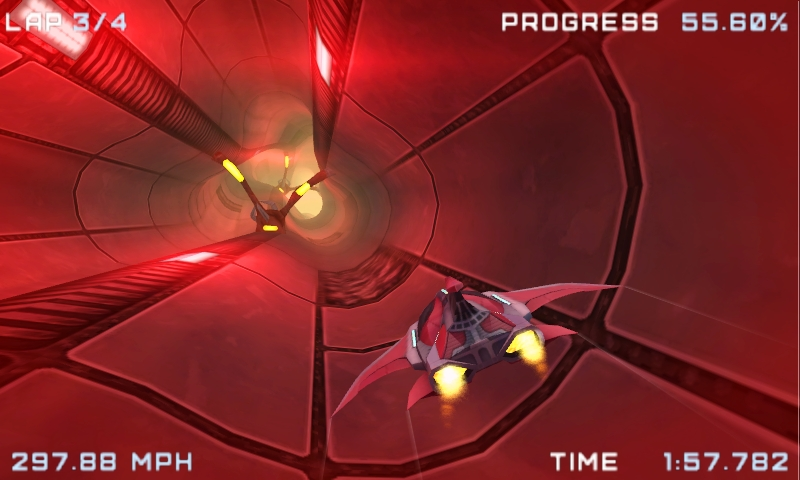 Visually, there is an opening cutscene that sets the bar pretty high. It looks good (though it is easy to miss, as I did the first time, if you over-mash buttons getting started). It is on par with the movie scenes from Resident Evil: Revelations if you are looking for a comparison. The actual game graphics themselves hold up pretty well. After having spent so much time playing a colorful racing title like Mario Kart 8 on the Wii U, what you get here is unspectacular but decent for a handheld system. There is a decent enough variety with scenery as a single map can take you from infected-looking wasteland to dirt and grass in a single race, though the lack of a real story makes these scenery changes feel somewhat jarring at times. Thankfully the 3D effect holds up quite nicely, creating an excellent sense of space as you zip around the various tracks.

The sound effects are somewhat muted and difficult to hear, but I was actually okay with these because I really enjoyed the driving techno soundtrack. These are great, fit the theme of the game perfectly and have a pulsing, relentless feeling to them that actually works hand-in-hand with the racing elements of the game. It is a shame that the sound effects were so completely drowned out, but from what I heard they were simply filler and nothing special. I will take the music over them in the end. 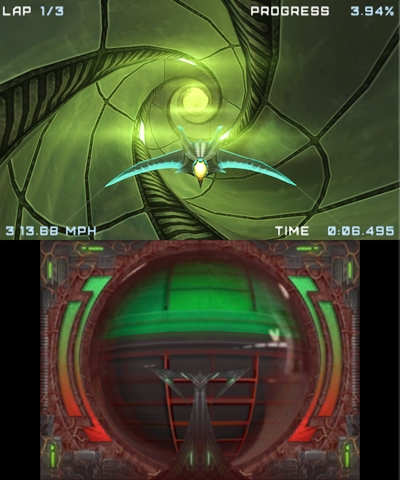 Despite the name indicating a racing game, AiRace Xeno is really more of a time trial game. When I think of a racing title, I think of opponents on the same track as me (again, maybe too much Mario Kart 8 over the last two weeks). Here you are essentially navigating an obstacle course as quickly as possible in an attempt to secure the fastest track time you can. You can accelerate to improve your times, but also increase the likelihood you will crash into something in your environment.

As you progress through the levels, your ship will change and it provides a nice visual motivation to keep advancing. However, without the unpredictability of actual opponents on the track with you, the game can get somewhat repetitive since it becomes more about memorization and timing. Perhaps some randomized elements built into the levels to help mix things up would help stave that feeling of repetition off, but I suppose that by doing so it would be unfair when trying to compare one timed score to another.


My biggest gameplay grip is that the respawn is not always handled as intelligently as I would have liked. Sometimes the respawn points have you pointed right at a wall, and you have to be instantly aware of this on your height adjustment or you will simply crash again (and possibly again and again). I remember at one point in the very first level getting caught near a double gate because I had initially crashed into the divider down the middle, and the respawn kicks you off into high gear pointed right back at said divider.

Overall what we have here is a fun diversion, with AiRace Xeno competitively priced and competently built around a fun if somewhat repetitive gameplay mechanic and excellent music. It is certainly worth a play, perfect for small bouts of racing on the go or when you have a few minutes to spare where you want something to play for a few minutes without having to sit down and invest an hour or more.