There has been something of a resurgence in the beat ’em up genre over the last year or so. Whether it was seeing an older property given a new gloss of paint such as Dungeons & Dragons: Chronicles of Mystara or the fairly well-received Dragon’s Crown. That these two titles had a fantasy theme might also play a factor in the attempt to bring Battle Princess of Arcadias to North America on PlayStation 3. 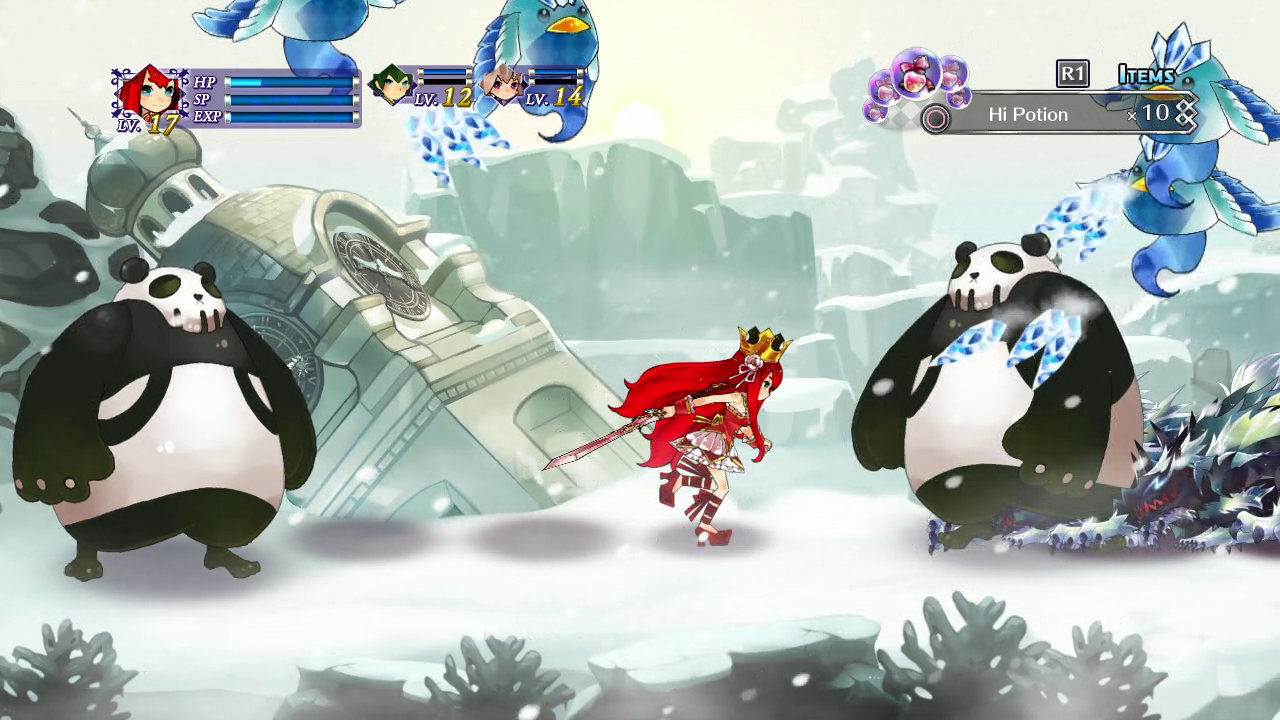 The first thing to note is that the visuals are striking in their use of color and movement. At a glance, it really reminds me of Child of Light, perhaps because of the red haired female protagonist at the center of the action. While the visuals have a vivid fantasy feel to them, they are not quite as crisp as Ubisoft’s platforming RPG, nor do the games play anything alike. Battle Princess of Arcadias is a side scrolling beat ’em up through and through, though it does have some nice RPG style hooks built into the gameplay as well.

The basic combat is pretty simple at first glance. You can jump, you can use a strong or a weak attack and you can use items as you move about clobbering your enemies while scrolling from one side of a generally short map to another. There is some nuance to be had however, as you can swing down or pop enemies upward, double jump, build up to a powerful special move and more. There are some pretty distinctive styles at play as well. Right off of the bat you can switch between using an archer, a mage and a sword wielder, each with different styles and types of attacks. Later you can unlock a much broader cast of characters and while an axe-wielding character might seem similar to the melee-heavy titular battle princess in this game, there are differences in their damage and the types of swings they perform.

Killing creatures yields experience for leveling up your characters and sometimes drops items that you can later use in enhancing weapons or selling for more gold. Enemies tend to come in a handful of familiar varieties such as airborne, quick with light hitting or heavies that can take a beating and dish one out. Unlike most other brawling games, everything is very 2D. Your character occupies the exact same 2D plane as your enemies. Very few brawling games concern themselves with actual defensive measures because defense usually consists of moving up and down on the plane to work around your opponents. Here, you have two defensive mechanisms. The first is the block – which you will be using a fair amount in later levels, and the other is mid-air recovery. You can usually pull your chosen character out of a fall and immediately go back on the offensive. 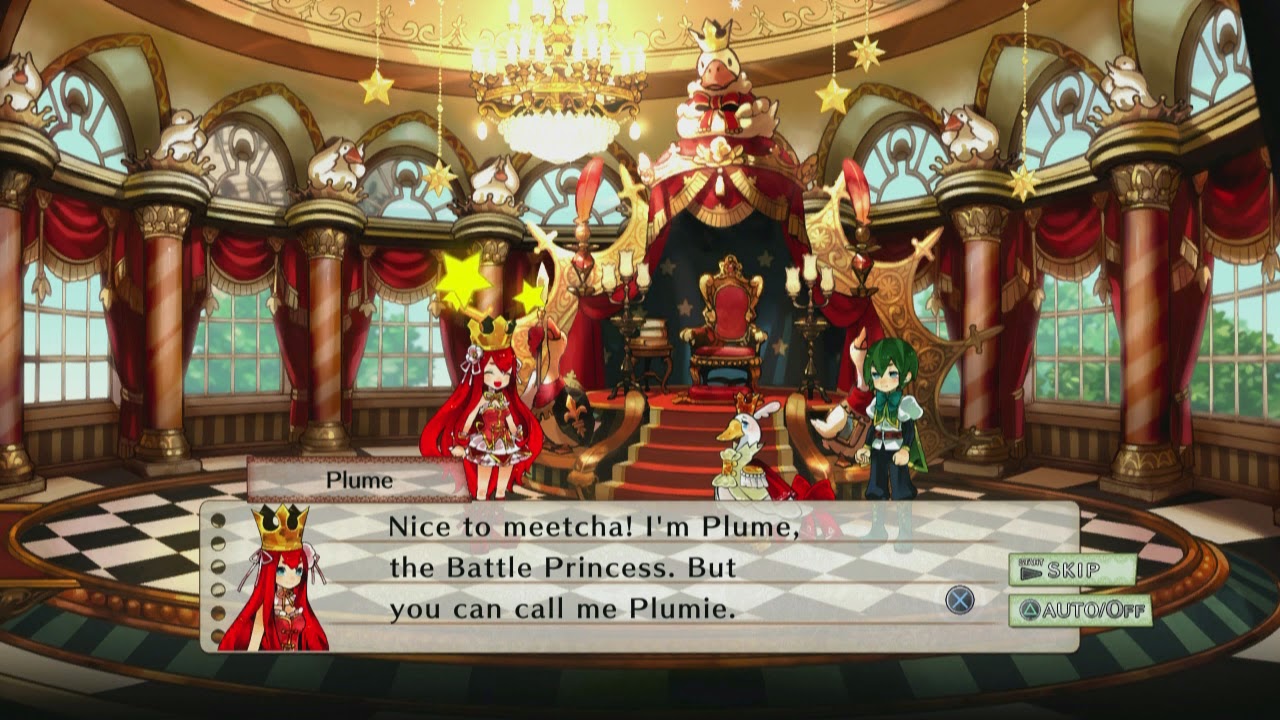 In brawling games offense is usually the best defense as you attempt to pummel all of your enemies into submission. Battle Princess of Arcadias has the same objective, but defense is a must. This is especially true in boss fights, but I have also died going back to the very first area with a level six character when a flock of birds absolutely abused me mid-jump. I kept trying to attack back instead of blocking and my character died.

Each map, you choose three characters to take into combat. Each has its own level, special bar and life meter. You can swap freely from one character to another with a quick trigger push. Each character who survives the level gets an affinity boost at the end. The more the characters become fond of each other, the more the unused backup characters will enter combat to help of their own will during combat. It is a neat feature, and the first time or two it happened, I was given pause – but then when I came to understand what was happening, I started to look forward to those moments of help from my teammates.

If Battle Princess of Arcadias was simply a brawler, it would probably rank as a slightly above average one, but what really helps it to stand out are some additional RPG and strategy elements. In between combat levels, you can visit the city and stop off at a merchant, weapons shop or the barracks. The former allows you to buy and sell weapons and materials. The weapons shop permits you to upgrade and enhance your weapons further. The barracks are for improving your soldier units, which leads us to the strategic element of Battle Princess. 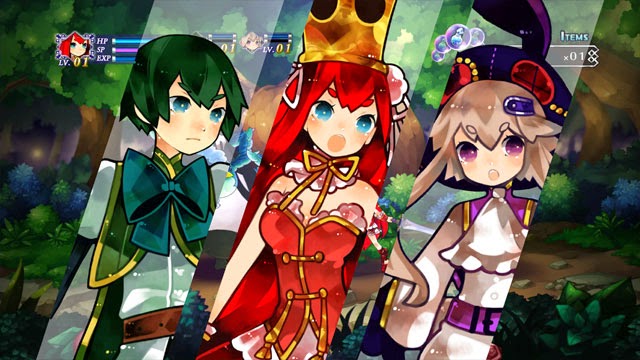 Boss fights consist of a single screen that still scrolls to the far left and right, but the objective is to manage your army of 150 units. You can set them up to be defensive, so they suffer fewer casualties but also deal less damage. They can be set to attack stance, which gives them a complete disregard for their health as they attempt to pummel the boss character in fast, concentrated bursts. There is a certain kind of flow to these battles, because you have to monitor not only the health of your three characters, who also participate in these tactical battles, but the number of units you have. Should your troop supply fall to zero, you lose the battle. You can order the troops to retreat, leaving you to fight the boss on your own until your soldiers replenish their numbers to 150, and then at that point once more assist you by reengaging with the boss.

These boss fights can be tricky initially as bosses have a few tricks up their sleeves as well. They have a health bar, but they also have shielding. The shielding needs to be depleted before the boss takes actual health damage. Of course sending your troops after the boss with a balanced or aggressive style means you will deplete the boss health and shielding more quickly, but they will get wrecked by the boss’ attacks as they are often area of effect and capable of taking out a good number of troops at one time. My brawling instincts are almost always set to kill as quickly as possible, but here I often found myself ordering my troops into defensive postures until I saw an opening – much like the necessity for defense in the combat itself.

The soldiers can be improved as well, and that is where the barracks in town come into use. You can spend gold to train up the units, who can reach whatever level their leader character is. For example the Battle Princess commands sword swinging soldiers, and you can raise their level – and thereby this skills and stats – to equal her own level. It is a cool system that requires thought in a genre known for being fairly mindless. 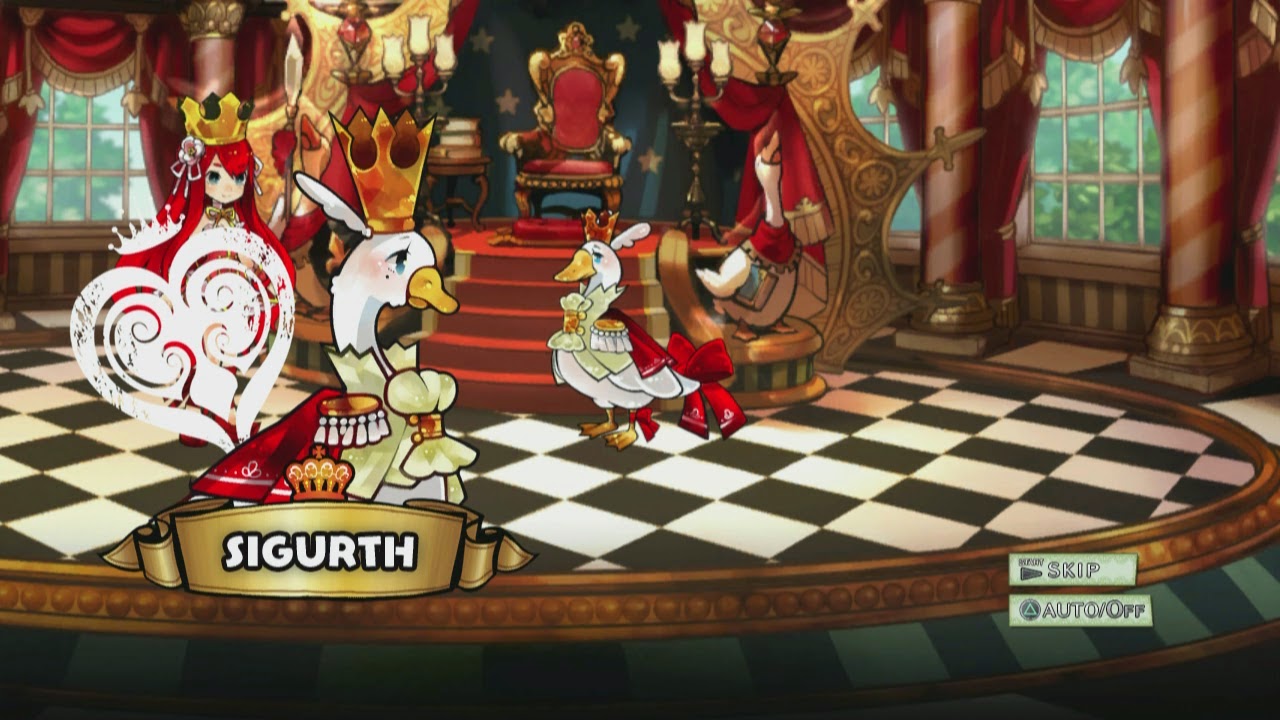 Battle Princess of Arcadias gives plenty of opportunities to improve throughout the game. With weapons that can be enhanced, soldiers that can be leveled up and characters that can gain experience as well, this seems like a game that would be easy to beat once you spend some time grinding. The thing is, Battle Princess is not an easy game, because it will punish a player who tries to be too offensive-minded. Thankfully dying is not a significant penalty. Any progress made during that level is lost, but that is it. It is certainly a forgiving system, which is good because I did fall in combat plenty – especially early on with boss fights.

It is a shame that the stories and characters are not a bit more interesting. That is really the weak point in the overall formula for Battle Princess of Arcadias. Some of the characters are amusing – mostly when interacting with a specific foil such as two generals introduced early on. The prince of the land has been magically turned into a goose, so while everyone respects his rank – the ridiculousness of it all is almost as likely to inspire an eye roll as a chuckle. Even Plume, the Battle Princess, has a sort of naivety to her that is both charming if a bit silly.

Plume is considered the spiritual leader of her kingdom on the battlefield, felling ancient creatures and droves of armies – but she is still so childlike as to not understand that when people die, they do not come back. One of the other characters, her squire, has to explain to her that she may see similar monsters over and over again, but that they are not the same creature, and that her deceased friend from the story’s introduction is never coming back. It brings me back to the comparison I made at the beginning of the review with Child of Light, where another red haired princess was the focus of the story.


In that game, Aurora felt like she was growing up throughout, but she
felt much more childlike than Plume who seems like she should know
better than she often does. They are small details, but they add up over
time to create a story that has charm, but very little emotional
investment in how the actual plot plays out or what is to come of the
characters participating in it.

That is really the only significant misstep in Battle Princess of
Arcadias, however. The combat is fun and with so many different
characters, full of variety and reason to experiment. Zones can be
replayed for grinding up experience, gold and items – which will be
useful because Battle Princess is also a challenging game. It makes you
think and makes defense not only a credible option, but a necessary
skill to develop both during the action-oriented combat and the more
tactical levels as well.

The end result is a brawling
game that has found a way to bring something unique to the table while
keeping the gameplay fresh and interesting. Absolutely worth playing for
fans of beat ’em up games.