The premise behind Catherine is an interesting one, and the dilemma of the storyline comes down to how to reconcile two very different women. In a way, this can be how the video game itself is viewed, because it has two very different halves, and those different gameplay experiences do not always mesh effectively. 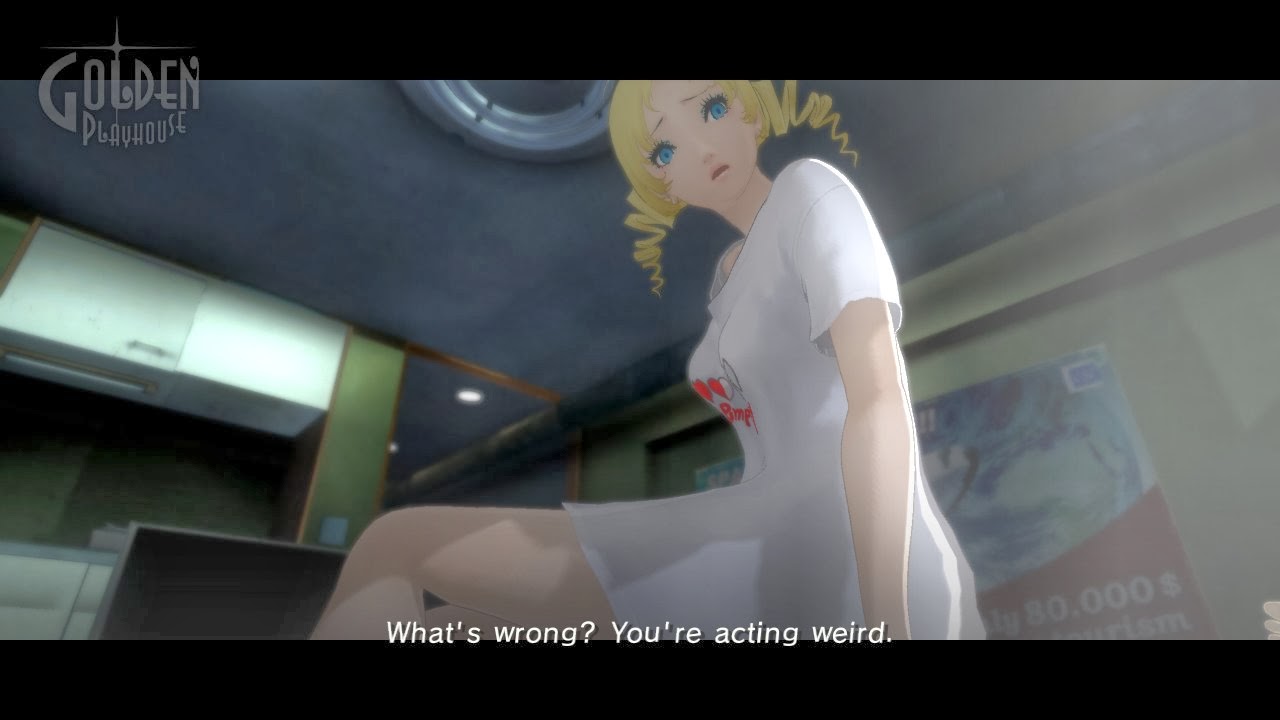 You control a character named Vincent who is an average, everyday guy who has been with his girlfriend Katherine for about five years now. Topics such as marriage and even children come into focus as Vincent tries to figure out what he wants from his life. Enter Cathrine – yes, a completely different character with a name phonetically said the same way as Vincent’s girlfriend. This newcomer presents herself as the complete opposite of Katherine.

Vincent’s girlfriend wants to settle down, be responsible. Catherine does not understand why anyone would want to be tied-down by marriage. She wants to live life to the fullest. Perhaps most importantly, she wants Vincent – who wakes up with her in bed the morning after they meet.

From here the game plays out in two very different ways. During the day and early evening, Vincent goes about his daily life. He hangs out with his buddies at the bar, he goes to work during the day and he tries to figure out what he wants from himself and his relationships. This section of the game has a very heavy role-playing aspect to it, because it plays out as a story that you interact with in a variety of ways. Do you talk to the guy at the bar, or the cop in the booth? Do you want to spend your time sampling different drinks and playing the arcade machine in the bar? Feel free. Talk to your friends and decide what you want to say to Katherine when she texts you – or Catherine when she sends you a naughty picture of herself. All of these choices have influences on the story going forward, though some of those impacted moments are more obvious than others.

Then there is the second half of the game, which takes place during Vincent’s nightmares as he sleeps. Here you navigate a puzzle-like set of obstacles, trying to climb up blocks with a variety of hazards along the way. This all starts easily enough, and the basic premise is pretty entertaining, but be forewarned that these puzzle segments can quickly turn into one of the most challenging and frustrating gaming experiences you will ever encounter. I think I swore at these puzzles more than Demon’s Souls. 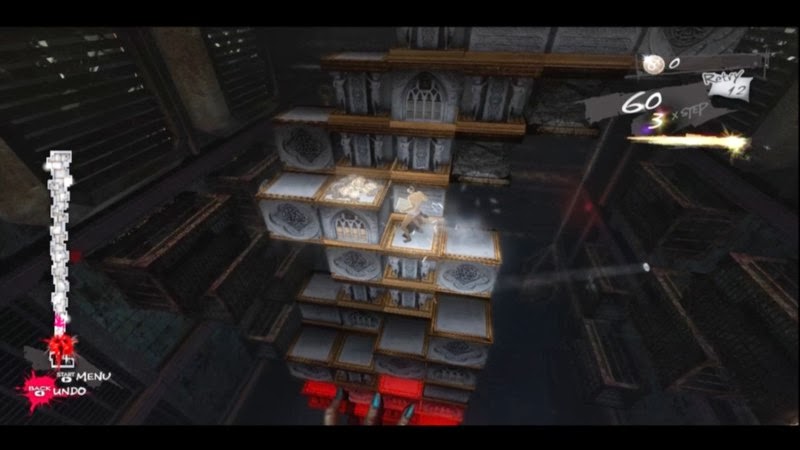 ATLUS employs their anime-like graphics throughout this title. The game has an interesting use of color and the actual puzzle portions deserve high marks for making such a complicated game at least easy to identify things as you work your way upward. The actual cutscene animation is probably a matter of opinion. I enjoyed it quite a bit, but my son was not impressed by it at all. He felt it was a bit too herky-jerky for his liking. 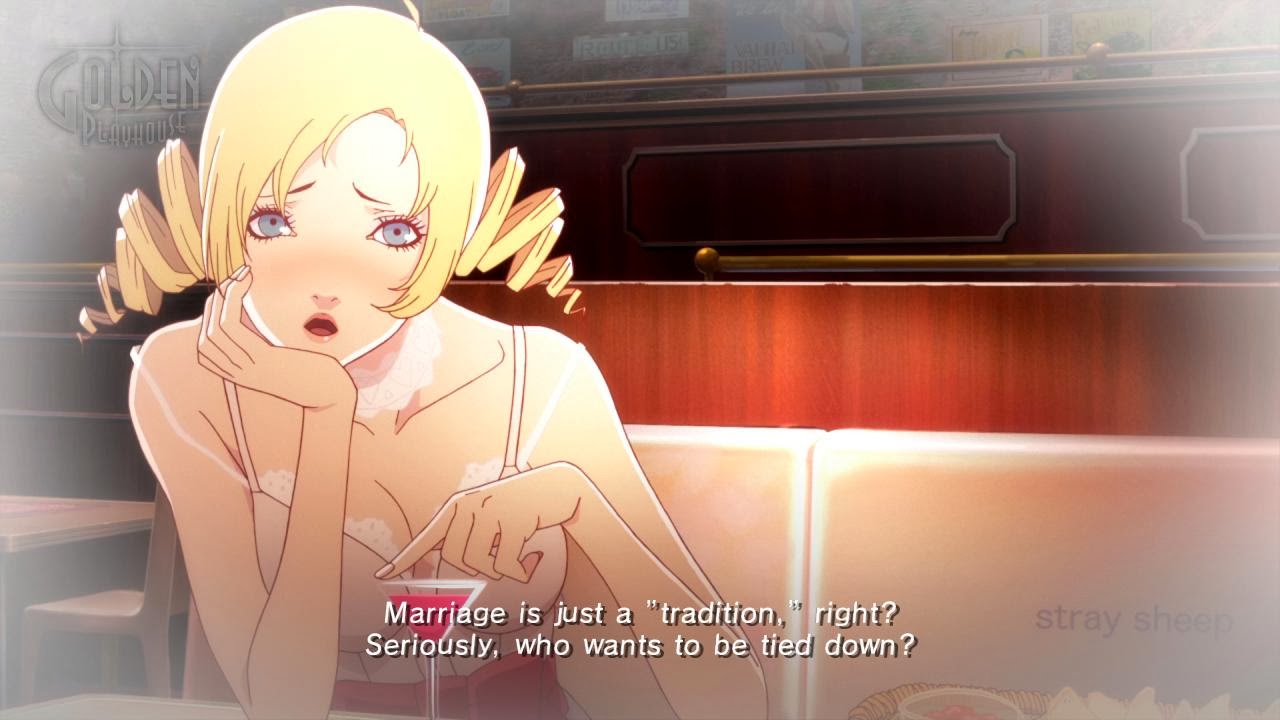 The music score, like the voice-acting, just seemed to ‘fit’. Once again ATLUS has used some of their more talented voice actors (familiar voices from other games – Persona 4 in particular – made up a good portion of the cast), and they helped make the characters and their situations far more interesting. While the game is certainly centered on the main protagonist Vincent, there are plenty of other characters working through their struggles as well. Some are better realized than others, but the voice acting really helps out here. 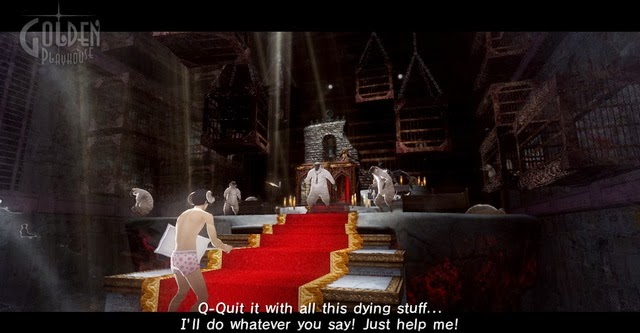 Mixed bag here, really. Navigating the conversational daytime scenes is quite easy, and the menu is also a cinch to use. The ability to save anywhere during that time is also a bonus. It is the puzzling portion that brings this down a bit – but really the puzzles will take a harder hit in the intangibles section. Overall, Vincent controls pretty well for the basic puzzle operations. That said, some of the more advanced puzzle mechanics can be frustrating. Cheap deaths abound. 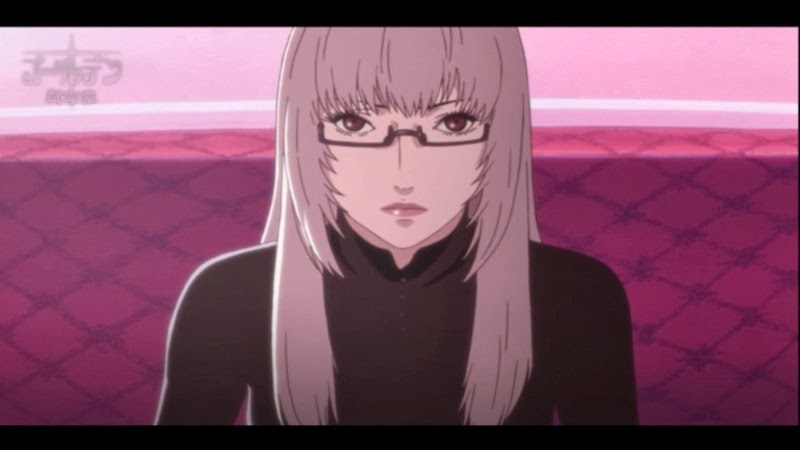 Going back to the gameplay, at least a little bit here. The puzzling section was entertaining for the first few levels. after that though, you really had to bend your brain on them – and frankly many of the deaths just felt cheap and undeserved. If it was just scaling the bricks, it would not be too hard. Adding the various traps? That could certainly lead to death as well. Add to it that you’re timed on these levels, because blocks fall away under you – or worse yet in boss fights they also add targeted attacks to the mix, and you have a recipe for frustration. Also, there is an escort level near the end that feels borderline broken at the higher levels of difficulty. I honestly have not been that angry with a video game since Demon’s Souls and some ridiculous one hit kills a few years ago.

It is a shame really, because the story elements are actually pretty entertaining. There is replay value to be had here too. I have had multiple run-throughs with titles like Mass Effect and Dragon Age because I want to see how the story lines change with my decisions. That to me adds incredibly replay value, and I was curious about Catherine’s. That being said, I fired it up and got a few levels in and hit the first of the puzzle levels I really disliked and… just gave up. I decided I could Youtube the endings rather than subject myself to more frustration.

One really interesting aspect of the game is that it tries to ask you, the player, some pretty deep questions. After levels you enter a confessional and are asked a question. Your answer is then compared to that of others (if you are online it compares your answer to what other gamers have answered. If you are offline it tells you how some survey results gathered while the game was being made said). 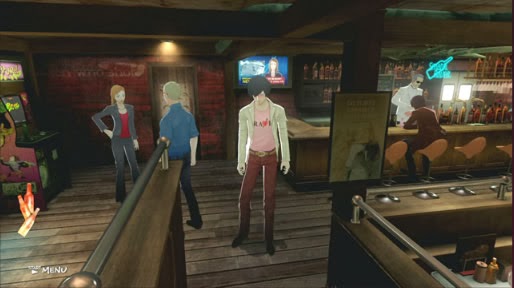 The punishing puzzles will turn off a lot of gamers. Not all – and for some the mind-bending puzzles will be a delight, I am sure. Thankfully there is an easy mode for those who want to use it – I will admit I cannot even imagine trying the hard mode. It is a shame because I would have liked to have viewed the story again trying different things, but not enough so to warrant the eventual frustration. I definitely applaud ATLUS for doing something new and different here though, and Catherine is a good game. I enjoyed myself more often than not. However, it becomes hard for me to give Catherine a higher score, because it would be something I would have trouble recommending to at least a good number of my friends. 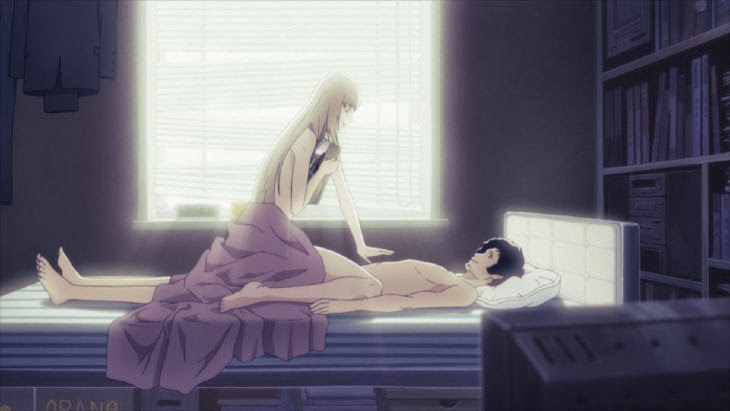