There are certain games that go through several variations over time and sometimes these aren’t as good as the original, but then sometimes they are even better. I never got the chance to play Epoch in it’s original version because my mobile device at the time could barely support my email at that point. Now, Epoch has been re-released to Steam and enables players to choose between a keyboard and mouse setup or to use the option to plug in a controller if that is your preference. 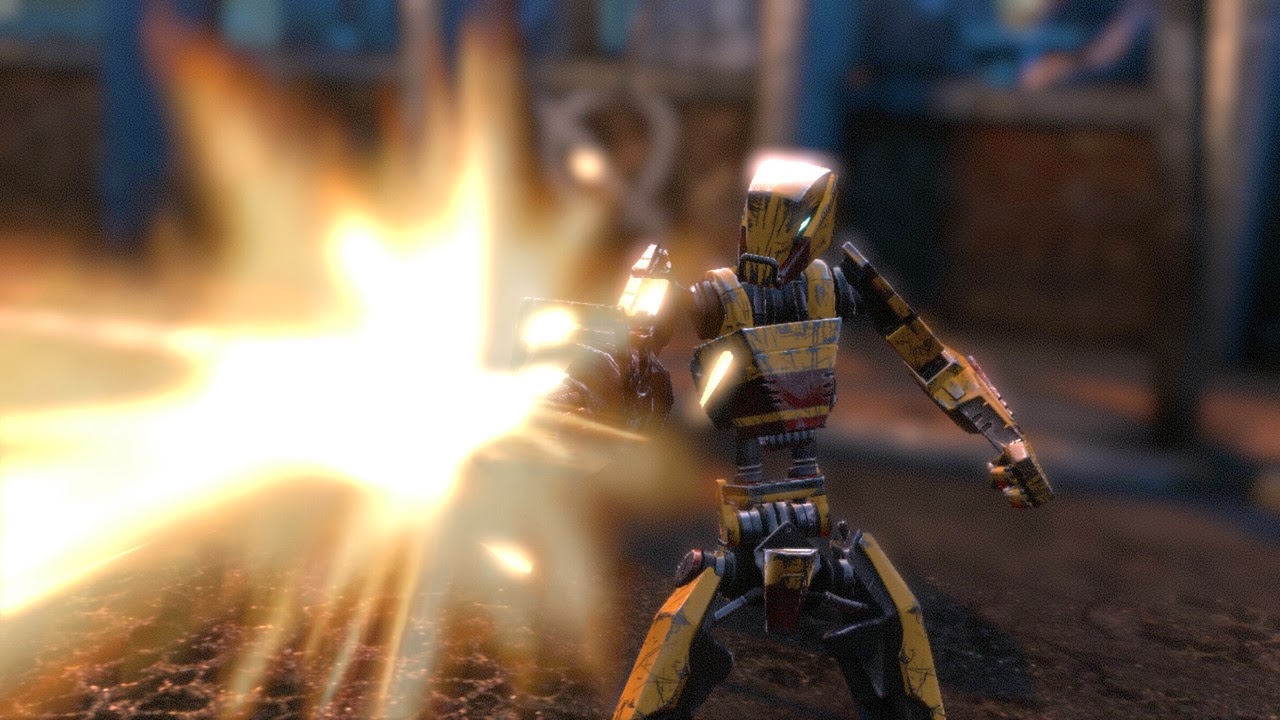 The first thing about Epoch that struck me is interesting is the concept, in which you are a robot (now I have Powerman 5000’s – World’s Collide stuck in my head) belonging to a princess who was on his way to a repair plant when the transport was shot down in the middle of a Robopocalypse. You wake up, do a quick self-diagnostic and as the princess comes up in your HUD you set off towards the tower to find her.

Graphically Epoch is quite stunning considering you are spending your time in the war torn zones of a Robopocalypse. The Unreal engine lends itself quite well to Epoch allowing not only various smooth moving robots, but plenty of projectiles such as missiles, grenades, charged energy shots and laser beams all filling the screen at the same time. These dangerous obstacles are crisp, clear and some even make you cringe when you realize there’s no way to avoid everything and dou have to decide between the lesser of two (or more) evils. Where the graphics can feel like a bit of a letdown compared to the rest is inside of the menu screen prior to each stage as it feel bland before going into any of the other windows such as the scrap yard or the intercepted communications.

Audio fails to impress, at least from the forgettable soundtrack. Epoch’s music runs on in the background, never really getting in the way but never really doing a good job of helping with the title’s immersion either. However, Epoch more than makes up for it in the sound effects department. Where these sound effects are truly a blessing is when grenades and laser beams are being launched in your direction and you may not have been looking that way, you have some audio warning as you can at least hear these and then react accordingly. 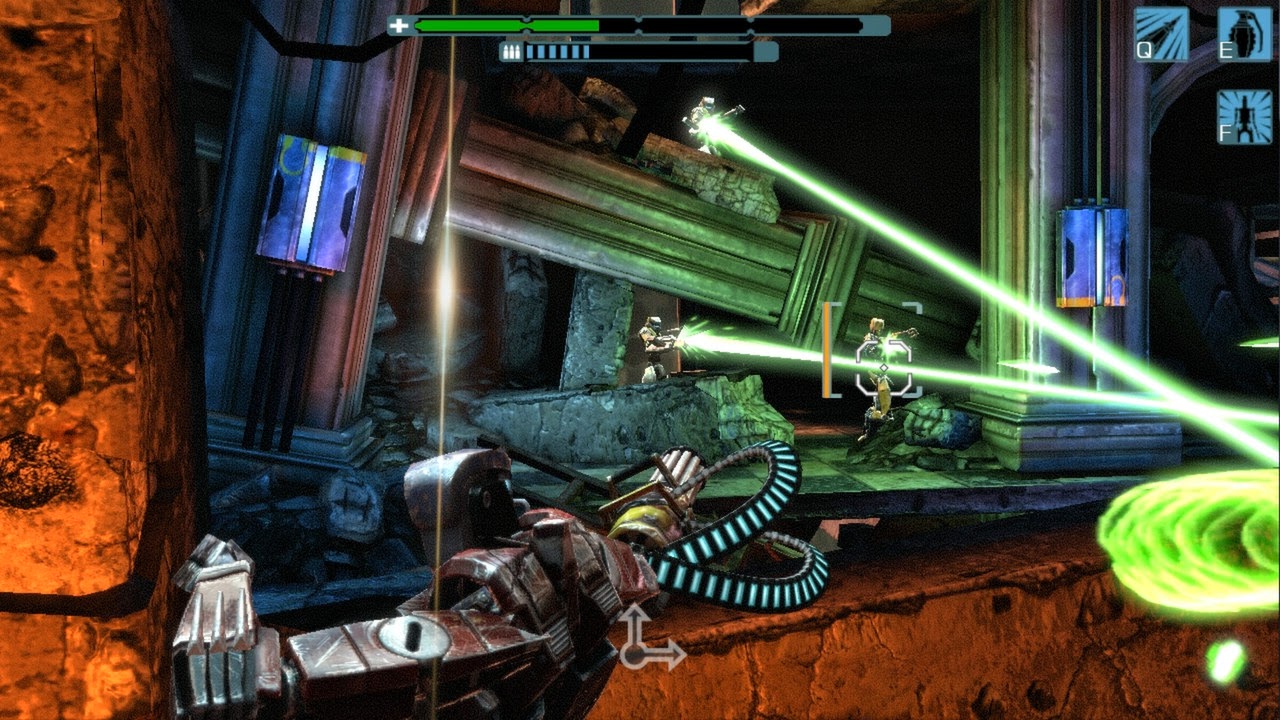 Epoch’s gameplay is an interesting blend of what seems to be several styles that all work quite well together for the most part. I don’t know if it’s because it used the Unreal Engine, but Epoch reminded me of Infinity Blade’s style mixed in with the MegaMan Battle Network. This is largely due to how the game itself progresses, but also the three column combat setup with the added shooting elements of a House of the Dead arcade shooter. Having access to only three columns makes Epoch much more strategic as the game progresses, because you are limited to where you can move. This is a sharp contrast to a title where you might otherwise be in a free-roaming 3D environment. Left, center, and right are your primary main placement options, however with all three there is the possibility to duck for cover which protects you against most normal fire. Of course, while you are ducking, this also means that you are not free to attack. From the left or the right column you can make use of an awesome feature that allows you to completely jump over the center portion to land on the opposite side.

One thing to be noted is that almost anything available to you is also available to the enemies. This makes combat in Epoch quite interesting as you go further and further into the levels and realize that your opponents are every bit as capable as you are. Weapon types consist of having different elements such as damage over time, explosions, fire, and electricity are split into several different categories for attacks whether they learn towards being slow firing and heavily damaging to the more rapid-fire style of others. Everyone will find a style that suits their method of play best. 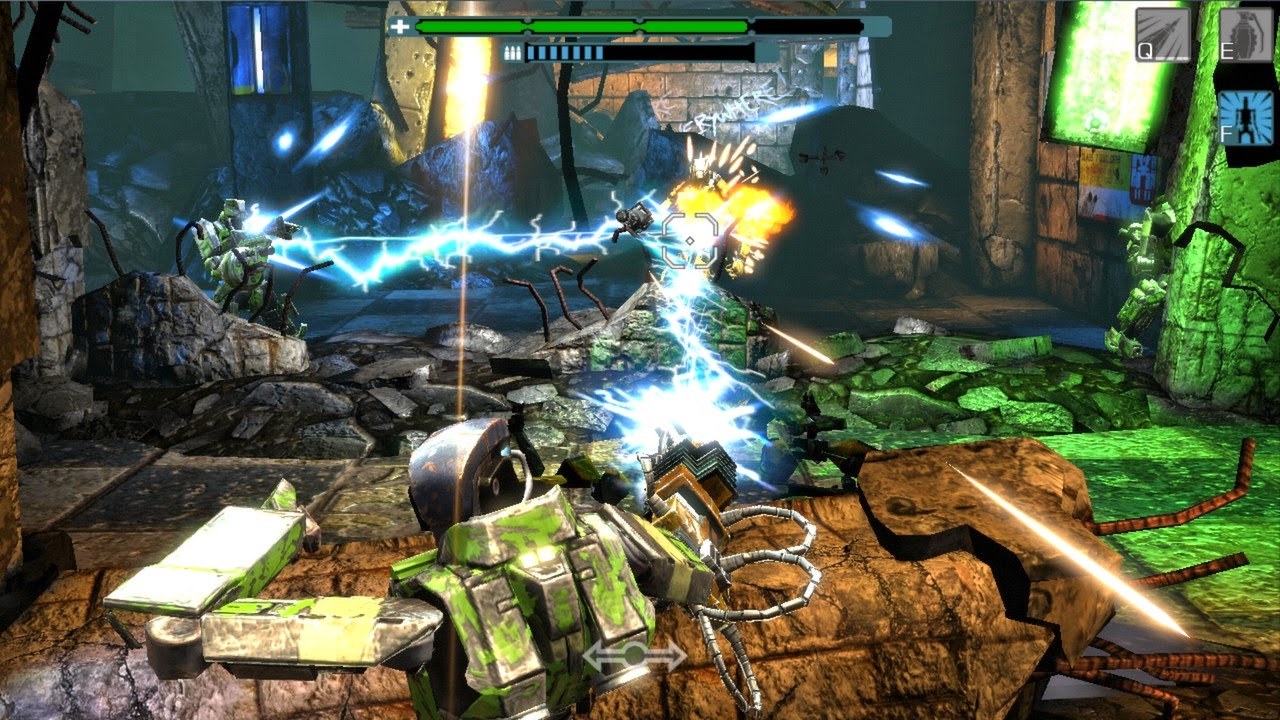 The campaign contains a series of levels that progressively get harder and add more enemy types as you progress. There are four difficulty levels overall, but they have to be unlocked. This means that easy mode is the only difficulty available until you successfully finish the campaign, which then opens the next level up. This is where the Arena mode comes in real handy, as this mode is essentially survival mode and the longer you last and the more enemies you destroy, the more money you can earn towards purchasing new weapons and armor.

The most interesting part of how Epoch’s story is told is not through its combat, but afterwards in the collection of intercepted messages that tell the story through various points of view. These recordings start as early as the the first days of the Robopocalypse and span to the more current events. These interceptions come in one or twos and unlock after every mission and area stage. What this leads to “the more you play, the more you know” which served as an interesting hook to keep me coming back for more.

Epoch is a great combat simulator with an interesting blend of styles . This variety makes it a lot of fun to play, whether you are looking for a bite-sized playing session on the go, or if you have a bit more time to set aside and want to play through an entire difficulty level.