Namco Bandai did an excellent job in creating a fun, neon-filled experience with Pac-Man Championship Edition DX, which I reviewed to a score of 7.5 here. The question was: could they have the same amount of success with their follow-up attempt, Galaga Legions DX? The short answer is yes, for the most part it is a pretty good game. 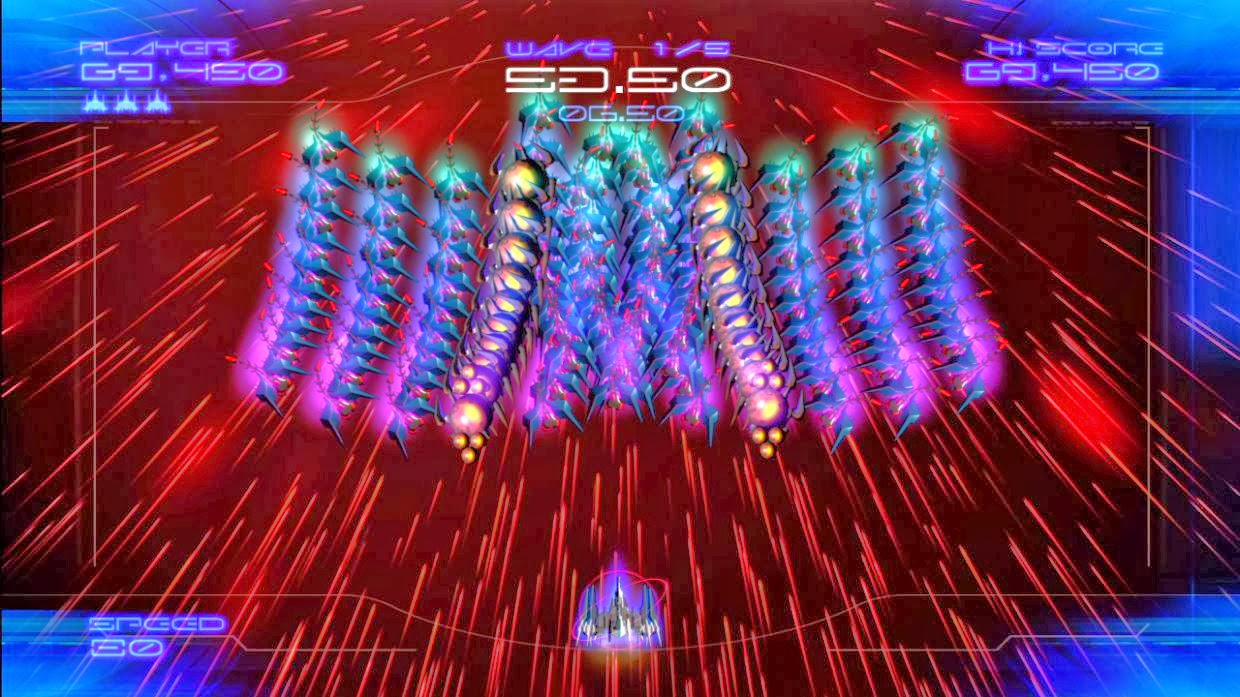 I will start by saying I liked Pac-Man just a bit better overall, but Galaga Legions DX has a rather trance-like effect on me. The game is absolutely saturated with pretty neon explosions and lights, with a music soundtrack and effects that thump along with the same kind of rave-like intensity throughout.

The gameplay is fairly straight forward, and it has an almost puzzle-like feel here and there, which probably sounds weird, so let me explain. The game itself is a shooter, plain and simple. You have a couple of different control options with your assisting side ships, able to focus their cannons forward with your ships and intensify the stream of fire you rain down on these alien hordes, or you can split them out to your sides and try to battle on multiple fronts at once. My son preferred the second scheme, whereas I felt more effective with the first. 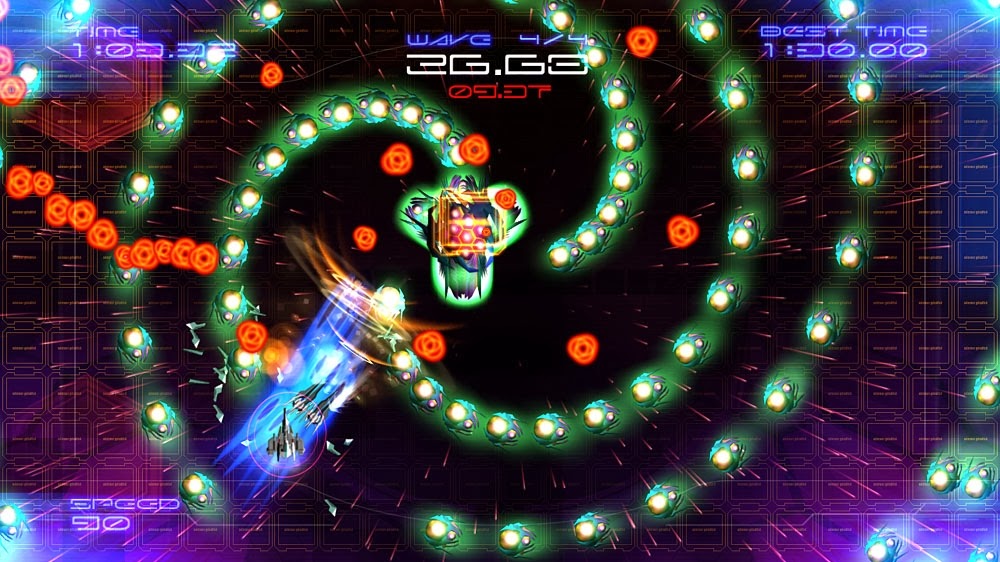 Wave after wave of enemy comes at you, and early on it is all pretty easy. Really the game itself is not terribly hard unless you crank up the difficulty levels before playing. Otherwise you are probably looking at about two to three hours to get through all of the stages, and unfortunately after doing that the only real draw to come back is to go for higher scores.

Essentially levels consist of predetermined waves of aliens coming at you (and often firing at you) from a variety of angles. Weave in and around them, trying not to get hit. When a projectile or enemy gets too close to you, the game does slow down and you get this Matrix-like effect where your reflexes get an extra moment or two to try and get out of trouble.

There is a timer that is counting down the entire time. The faster you eliminate hordes, the quicker you move through their ranks, scoring more points before the time runs out. This is where a bit of puzzle or strategy comes into play, because there are ‘shortcuts’ to beating waves. They have ‘boss’ creatures that are tougher than the little guys, but blowing them up destroys the aliens attached to them. Sometimes you just have to get the right angle, sometimes you need to blow up the occasionally appearing bombs that float past. Some levels send you an absolute wall of creatures, and you have to figure out if you are meant to drill through them, or perhaps slink off to the side and let their first pass move around you. There is some trial and error to be had here, but it never feels punishingly difficult.

The levels can almost feel like sensory overload at times, and I found myself simply cruising along on reflex as my eyes took in the various sights and my ears listened to the constant music. Time flew by, and though I said it took a couple of hours to beat, I did it in a sitting – I blinked and realized a few hours had passed. However, the desire to come back to Galaga has not been terribly strong, indicating that high scores mean far less to me than progression (something I already knew). Overall I would probably score this title a 6.25 out of 10, as it does feel a bit more like style over substance, but fun all the same.