The title of this one, like most of the games in the series, is a bit of a mouthful. The Hyperdimension series also has a tendency to throw a lot of content at gamers with JRPGs that present humorous characters, lots to explore and plenty of systems to learn. The biggest problem with this latest game in the series is that it retains most of the charm that the series is known for, but little of the deeper gameplay mechanics fans have come to expect as well. 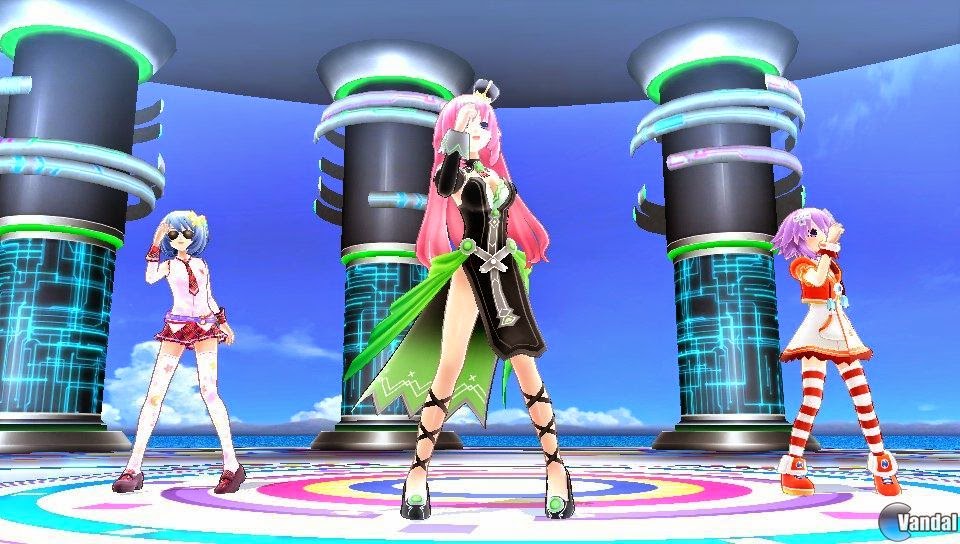 The premise once again takes place in the land of Gamindustri, but instead of actually controlling the well-known heroines of the series such as Neptunia, Vert, Noire and Blanc, you create a character that serves as their producer/manger. This is the first major change – instead of saving the land through combat and leveling these characters up, you are in fact managing them as singing idols through what amounts to a simulation.

The enemy here is more of an entity than cute creatures scattered across the typical JRPG landscape. Gamindustri is apparently made up of ‘shares’ – and these are being stolen away from the four main CPU heroines in an attempt at taking over the land. How is this being done? Through idols who sway the hearts, minds and imaginations of the populace as they sing and dance their way into great popularity. The CPUs quickly decide to fight fire with fire, and themselves attempt to become idols.

Quite a few games over the years have touched on the idol phenomenon, with Persona 4’s Rise being one of the more notable examples here in the Western side of the world. The culture around idols in Japan is in some ways similar to how we treat our own celebrities here, but with enough differences to make it feel like potentially fresh material for audiences in North America.

While I commend Compile Heart for trying something different, the actual gameplay lets down the charming characters and unique premise. I have always been amused by the over-the-top female representations of popular gaming consoles like the Xbox and PlayStation, and the dialog still holds up for the most part here. I say ‘for the most part’ because there is a ridiculous amount of repetition to be had in what turns out to be a very menu driven game. 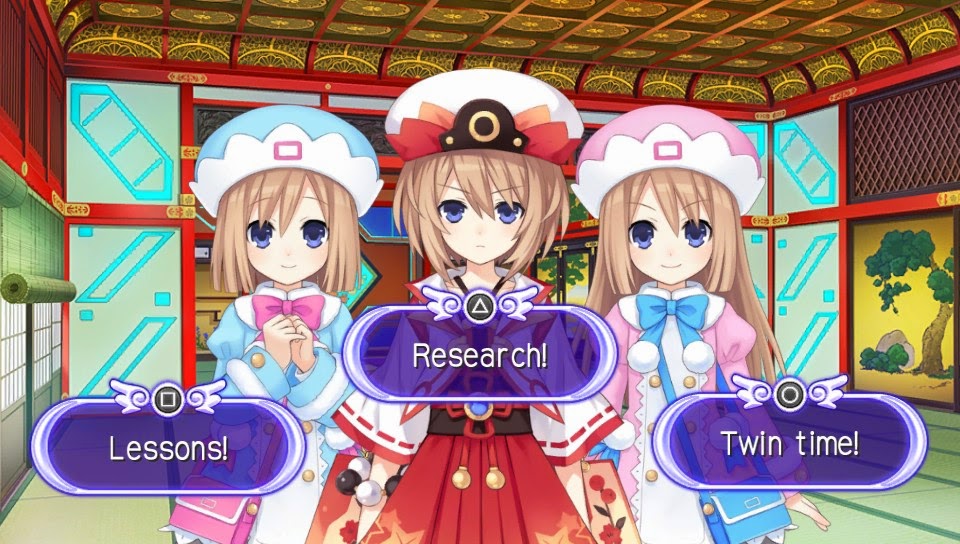 Most of your time will be spent choosing between work (recording new songs or promoting the singer/group), training (improving your chosen idol’s attributes), resting (because there are two key stats that need refreshing on a regular basis), moving to a new location and holding concerts. Sometimes you can choose different dialog options depending on how the scenes above play out, but most of the time you pick an option and simply turn into a spectator for screens of dialog. You can choose one option per day, and then you get a brief dialog with your chosen idol (I went with Noire) that varies based on her stress level.

There is a real sense of give and take with how you manage your chosen idol’s day. You can make significant improvements in one area, but the occasional loss of guts or increase of stress that goes with those choices gives a sort of ‘two steps forward, one step back’. This is Product Perfection’s greatest challenge. The most effective way of dealing with the stress is to go on a three day vacation. That completely empties it out and frees you up to do what you want – at least for a couple of days.

Most of the above activities will raise stress. Some will improve the idol’s guts. When you have a high enough guts attribute, a concert can be had. Let stress ratchet up to max and it is game over. The stress indicator got on my nerves several times early in the game, because in theory you should have the chance to do one of the above menu choices every day, but that is not always the case. In fact on several occasions I would make a choice that would raise Noire’s stress, then an auto event would take place the next day (with no warning that it would happen) and then there would be an update on the idol rankings. Both of these later two items might also raise stress. All of a sudden Noire’s stress had gone up fifty or so points without giving me the option to address it, ushering in a game over and forcing me to reload from a prior save.

Concerts have the potential to be interesting, but mostly miss on that front as well. You are constantly unlocking new venues, costumes, accessories and songs to help keep the concerts feeling somewhat fresh. Unfortunately the concerts themselves fail to bring all of these elements together in convincing fashion. You control the special effects and the camera angles, which in theory should be done in such a way that the audience is more excited and the concert finishes as a success – rewarding you for careful choreography. However, whatever system is at work under the hood is left feeling as though it is lacking, as I received as good, if not better, scores by simply mashing buttons through the process, creating completely unappealing angles that take almost all of the strategy out of the experience. 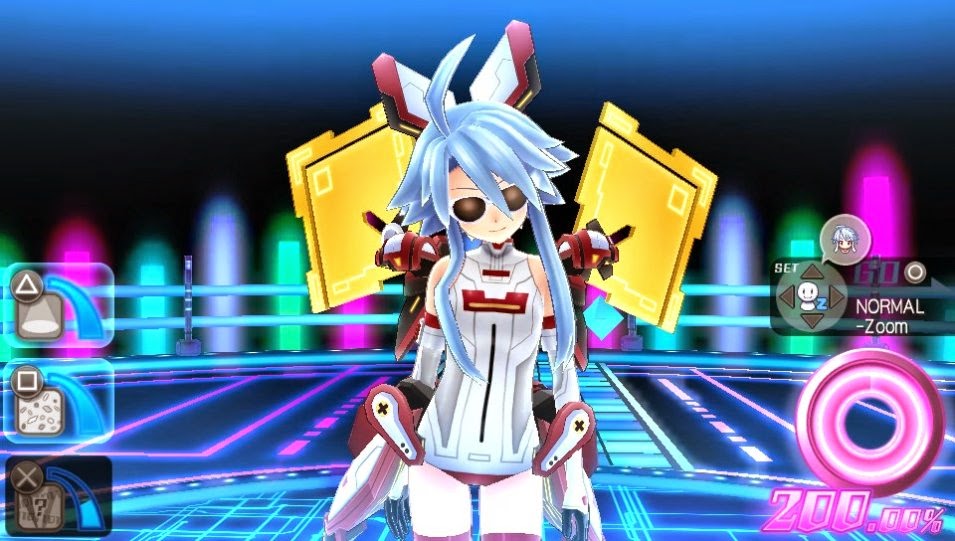 Still, that is not to say that Producing Perfection is really a hard game. The best way to win over the population is through concerts, so once you get the hang of managing work, training and relaxation that culminate in a concert, you have the necessary components to victory. This all has to be done within a certain number of days, but the first time I beat the game I had done so after only about three or four hours of play, and it was achieved right around halfway through the allotted number of days for completion.

There are a few extra modes and features, such as a Clear Game save you can use to create a sort of New Game Plus situation. A nice perk is it indicates what your choices were the last time around, allowing you to sample different conversational choices. Your idol also has her improved stats, giving you the chance to focus on different things the second time around. Other modes and options seem a little bizarre, giving you the option to dress and touch the idols with the Vita’s front and back screens and even to turn that mode into an alarm clock of sorts.

I adore the characters and the universe from Hyperdimension Neptunia, and I applaud the effort to try and do something new with the existing property. The series has never been for everyone, but if like me you are a fan of it, than the dialogue and charm will help carry you through the experience for a time. Unfortunately at the end of the day, the gameplay itself is lacking and you can see just about everything the game has to offer in several hours. The experience starts off pleasantly enough, it just runs out of steam entirely too quickly.

This is a series that already has a tendency to appeal to only a select niche of gamers, and I cannot help but feel like Hyperdimension Neptunia PP: Producing Perfection is going to be even more difficult to recommend to all but a handful of players.