comments Share
You are reading
Mario Kart 8 – Wii U Review

Things have been rough for Nintendo and their Wii U, which often feels like a console that was a step behind the Xbox One and PlayStation 4, despite actually having released before both of them. There have been plenty of solid titles for the Wii U so far, but for those looking for a shining example of what is right about this console, Mario Kart 8 should do the trick. 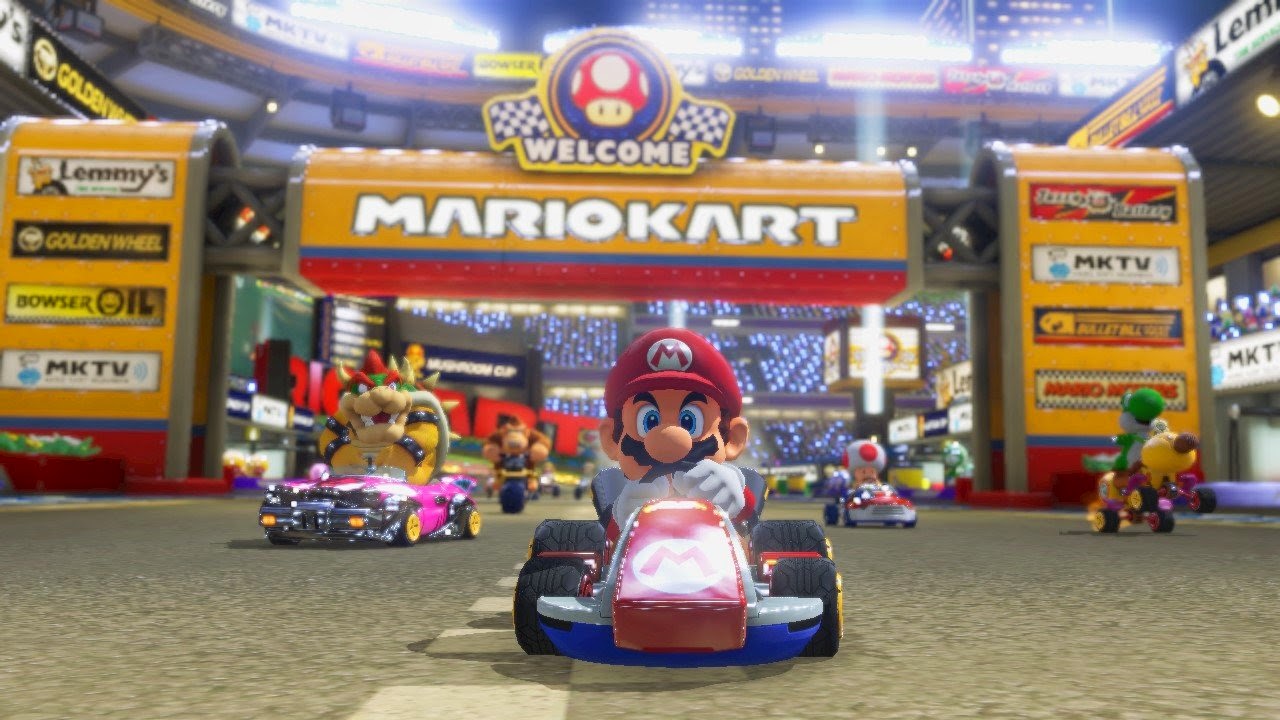 This series has a long history of bringing new track designs, cars and relatively minor improvements to the formula with every Nintendo console. Some changes, such as the hang-gliding, were better received than others (we are looking at you dual-cart Double Dash). In the end though, no one can question whether or not Nintendo’s premier racing title holds up in terms of visual and audio quality and the gameplay mechanics. Every release seems to be slightly better than the last.

In this case, the last release was Mario Kart 7, which we reviewed for the Nintendo 3DS quite favorably. Like the regular DS version of the game, Mario Kart 7 was a great deal of fun, but to be honest – I have been really looking forward to another big screen version of the game. Mario Kart to me is all about sitting around with friends – especially in the living room. Certainly online play is important (and thankfully an option with Mario Kart 8), but it has always been best experienced with other people in the room.

Mario Kart has real racing chops, despite cartoon characters, over-the-top track designs and silly if effective power-ups to use on one another. To fully appreciate how much I adore this series, you have to understand how many of my weekends were spent playing Mario Kart 64, GoldenEye and Madden during my college years. It seemed like every weekend at this friend’s house turned into some combination of wings, Magic: The Gathering, Dungeons & Dragons and of course – Mario Kart or Golden Eye. There were more players than controllers, and those who finished last each race rotated out for the players anxiously waiting in the wings. Winner calls the next course – but no same track twice in a row. Battles were the stuff of swearing, laughter and lots of good times. 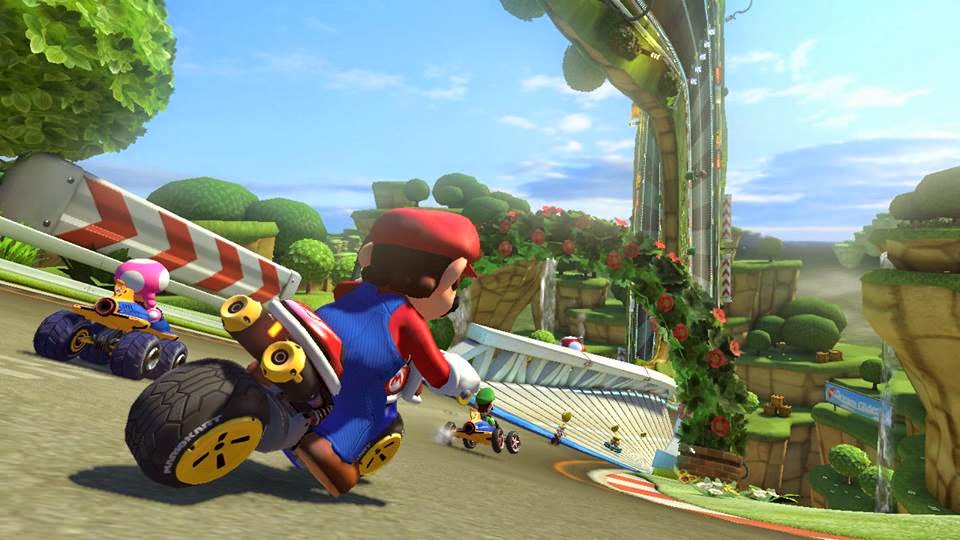 Flash forward not quite twenty years, and I spent a healthy chunk of my weekend playing against my children. There were no wings, certainly no beer and no swearing. That being said, the atmosphere was largely the same now as it was back then. We were hooting and hollering, laughing and joyfully hating on certain items when they got used. Lightning bolts back during the Nintendo 64 days were sounded off with a “Be Small!” by the person inflicting it on others. When my oldest used that ability again this weekend for the first time and shouted that same phrase, I could not fight back my ear-to-ear smile.

So much of what has made Mario Kart great over the years is present in this latest release. The graphics are amazing, with vivid colors, a buttery smooth framerate and so much varied Mario fan service throughout the different tracks. The music is gloriously peppy and the characters make all the right hoots and hollers while the game’s sound effects can tell you exactly what is happening around you, even if you cannot yet see it.

Racing games always seem to hold up well visually. Forza for the Xbox One was very pretty. I have long speculated on why this is. Maybe the engines for racing games just do not have to do as much. In a game such as Forza, you can interact with other cars or the track, but the other scenery is just window dressing that does not let you interact with it. Car models can get dinged up or show reflective lighting, but they do not have to worry about things like natural body movements or expressive facial features like an action game might. 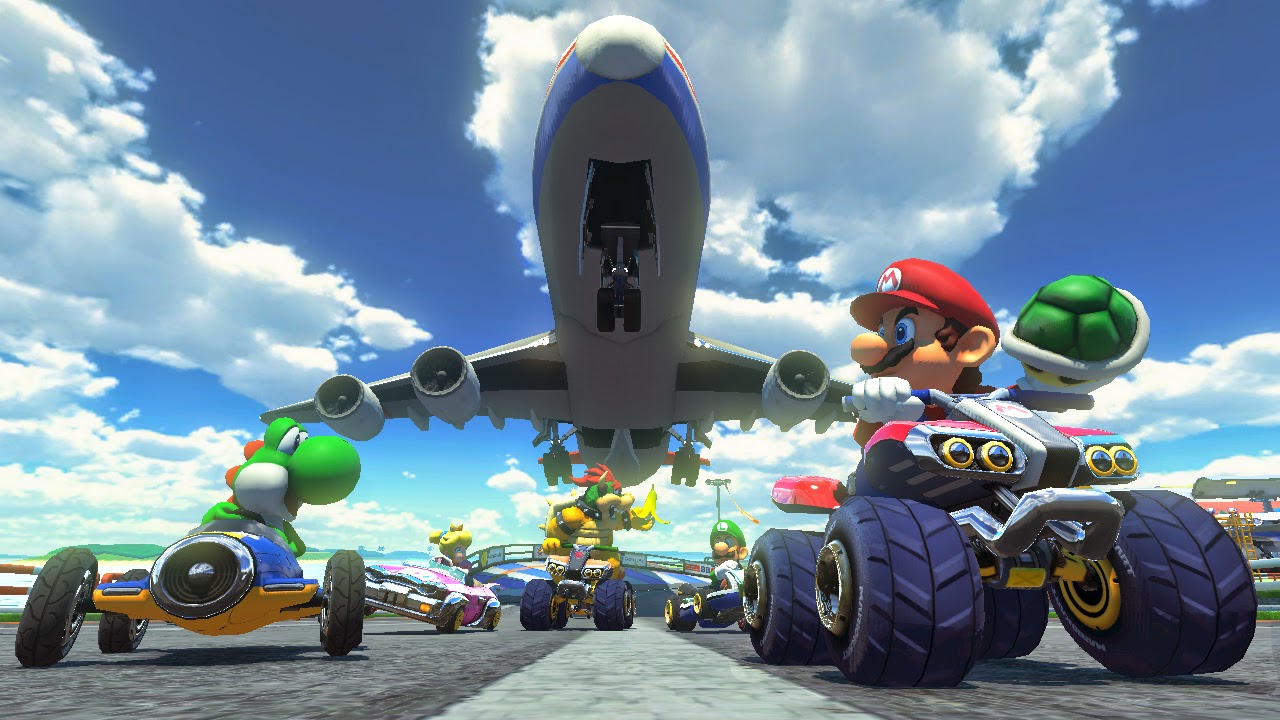 Still, despite the superior processing power of the Xbox One, I would be hard pressed to say Forza is a better looking game than Mario Kart 8. Nintendo has once again shown that while third party developers sometimes struggle to embrace their console, they knew how to get the very best out of their own hardware.

Excellent presentation values, lots of modes and tracks, new power-ups, unlockable characters, circuits and cart parts all continue to make the Mario Kart series one of the best in the business. This happens with almost every iteration in the series, and the same is true here. However, perhaps the greatest accomplishment Mario Kart 8 makes is in the introduction of anti-gravity. This is an amazing new element that adds to the races when it occurs. The hang-gliding did this to a degree when it was first introduced, giving those sections of the race a slightly different feel. Here that is taken a few steps further, with the anti-gravity stretches comprising long stretches while giving you considerably more freedom while racing.

The hang-gliding element mostly consisted of shooting off of ramps and floating for considerable stretches of open space. You keep the ability to move left and right, watching the scenery zipping by in spectacular fashion. Anti-gravity is engaged when crossing a specific point in certain tracks. The wheels come up and you float along the path. Immediately the kart handles differently and bumping into opponents leads to both parties gaining a speed burst instead of simply trying to grind someone off of the track. This substantially changes the strategy for someone like me that likes to use Wario to knock people around the track.

The true creativity of anti-gravity shows up in the ability to ride along walls on certain tracks. It was quite exciting to go back and play a revamped track from a prior game, only to hop up on the wall and zip around the traffic on Toad’s Turnpike. It is an excellent way to revisit classic favorites from the series. It also adds a whole new level of strategy when you have ramps, boosters and items available on some of the walls and not just the ground. The Mario Kart series has always touted unique ways to shave time off of your laps, and this is an awesome new twist on that same established principle.


Nintendo has always been tentative with stepping into the online arena, it seems. Thankfully there are plenty of online racing options and they work wonderfully. Perhaps the best indication that Nintendo is growing in this area is the replay system. After each race, high points are cut up into a highlight reel that can be viewed at the end. These highlights can be further edited and uploaded to Youtube for even more sharing options. If there is a limitation here that disappoints, it is that the camera is fixed. Most of the time the system grabs a great angle, but some flexibility here would have been nice.

Really, about the only misstep for me was how the Battle Mode was handled. Playing these out on the existing tracks seems like an interesting idea and a new direction for a mode that always had unique areas (I loved the old Block Fort, once again taking me back to the Nintendo 64 version of the game). This change proves to be a real momentum killer in an otherwise almost flawless game. Battle was a great way to spend some time with friends with the completely original layouts that were designed with this combat in mind. Here the mode now feels shoehorned into tracks that are amazing for racing, but frustrating for this mode. Thankfully the actual racing and collection of unlockables are my favorite aspects of Mario Kart 8, but if Battle Mode was always your preferred way to play the series, you may want to try before you buy. The mode really is hampered a great deal by this really poor design choice.

Mario Kart 8 excels in almost every way imaginable. It feels familiar, yet fresh. Mario Kart 8 has arguably the best visual presentation of any game on the market so far. It provides multiple modes, unlockable items and outstanding racing. As long as the Battle Mode is not the most important aspect of the series, you will find a lot to love about Mario Kart 8. The Wii U has not been the hit that Nintendo had hoped it would be, but Mario Kart 8 helps gamers get the most out of this beleaguered system.