Shovel Knight, by Yacht Club Games, is a game made in 8 bit style, that doesn’t take itself too seriously, and excels at it. Instead of regaling you with myriad shovel puns, though, I decided to take the high road and stick purely to reviewing this awesome title… So let us dig in. 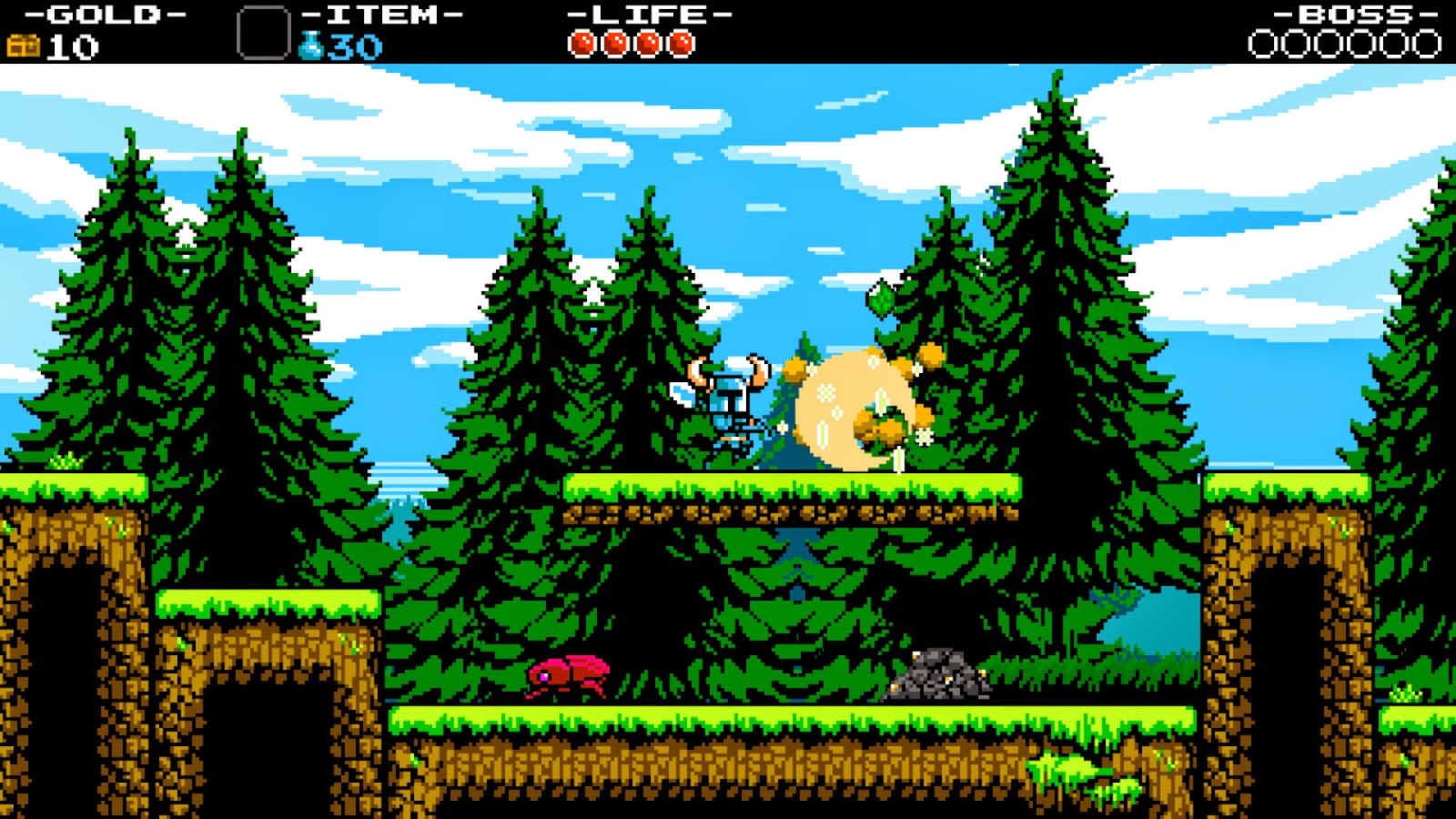 When you first break the surface, your senses are immediately assaulted by the harmonious bleeps, blips, tones and just about every other sound known to chiptune-kind. I have long been a fan of Virt’s work, and until now, there has not been a soundtrack from a game that I have loved more than Double Dragon Neon. Shovel Knight blows that soundtrack out of the water without breaking a sweat.

The range of songs spans just about every mood that exists as a part of the human condition, and perhaps some that exist outside of it, too, that we lack the depth and soul to truly appreciate. When you are climbing a tower, you are uplifted. While you are entrenched in the graveyard, Virt gives you a spooky Ghouls ‘n Ghosts or Castlevania feel, while climbing the clockwork monstrosity sends me back to Mega Man days of my youth. No two gamers have an identical game experience, let alone the same appreciation of VGM, but this title hits all the right buttons with me, as if it were ticking off a list of memories from my childhood. 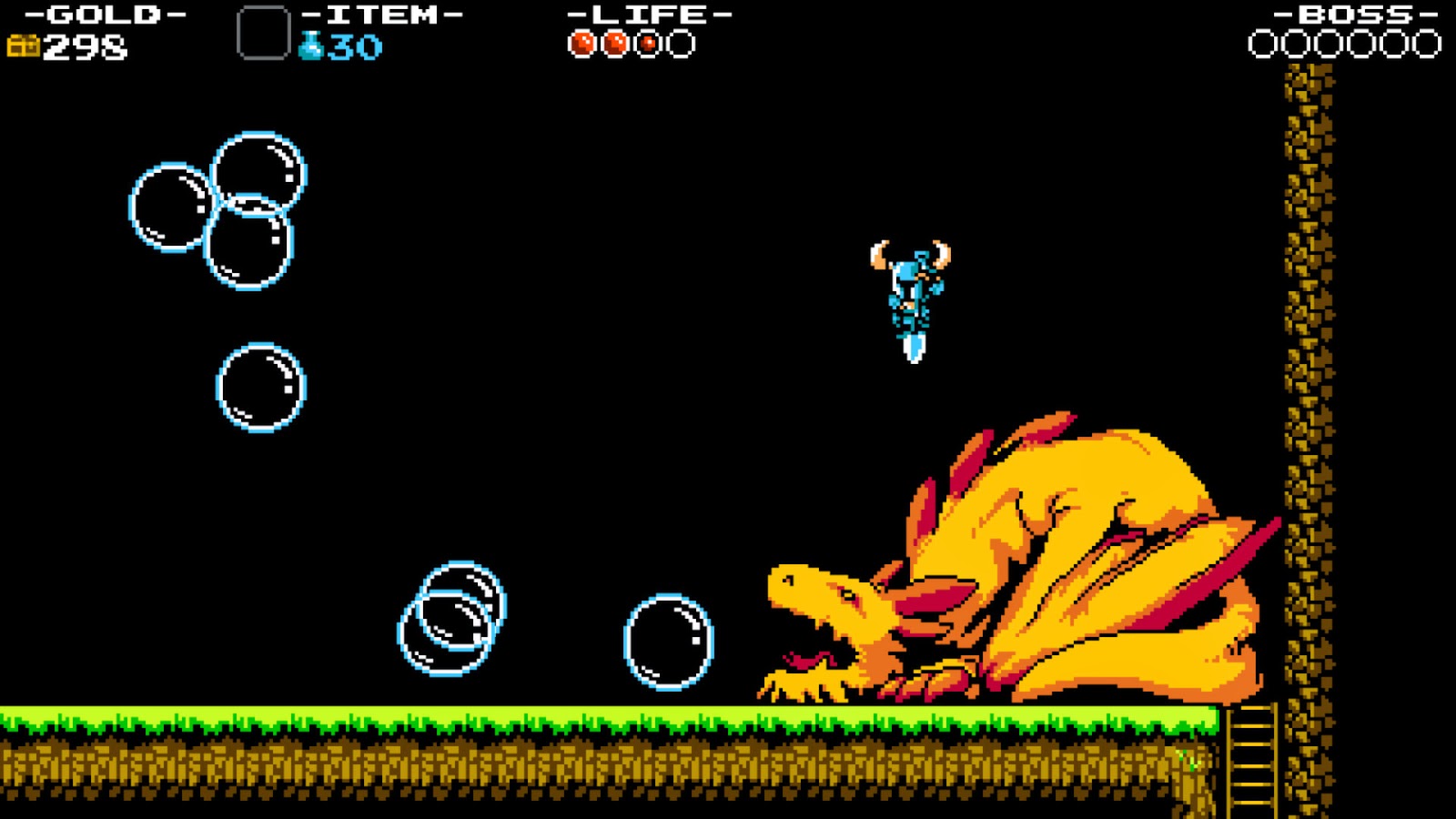 The gameplay starts out basic, and ramps you up as it leads you along. The introductory level has a boss that, in hindsight, clearly suffered from having just had a full frontal lobotomy. You are made to figure out how to dig, to downthrust/pogo, how to clear blocks, break walls, and every other little game quirk in a comparatively safe environment that manages, without a single word or sound, demonstrates how to accomplish the task, giving the player the opportunity to feel like they are clever and figured it out on their own, without needing their hand held.

I have long felt that a game should teach a player how to play it without them realizing that they have just undergone a tutorial, and the only instinct that is stronger is the old curmudgeon in me that wants to yell that a game should not have a tutorial at all, as that is what an instruction booklet is for. Gone are the days of driving home from the game store, furiously reading through the instruction manual for the game that my mother had just bought, absorbing all of the information that I could and tormenting myself with anticipation for something I was not yet able to partake of. That is more a lament on the state of the industry, though, than this particular game… and in the current paradigm, Shovel Knight not only prospers, it excels. Fans of Duck Tales will appreciate the level design and bouncing off of the heads of enemies. Those that spent their youth with Castlevania will find the sub-weapons a natural transition, collecting hearts that are cleverly disguised as magic potions, only to deploy the quirky tool with an up attack that had already been buried in their psyche since childhood with an efficiency that would put most brainwashing evil geniuses to shame. There are eight evil robot masters that have donned knight armor themed to their special weapon and personality, and what Mega Man game would be complete without the second-to-last level featuring the protagonist buried under a boss fight gauntlet, or, for that matter, a surprise reveal involving a ‘phase 2’ to the fight that is an order of magnitude larger than the original ‘final boss’?

The developers are releasing a number of free updates throughout the remainder of the year, promising to add a Rule 63 mode, Conquest mode and even separate campaigns for some of the Order of No Quarter (previously referenced as ‘8 evil robot masters’). The title already features a secret game mode that the developers put in for ScrewAttack.com’s SGC/Iron Man of Gaming contest that plays like a ‘time attack/scrooge up as much money as you can in an RNG-free level meant for competition, so to hear that they are planning so many more additions is phenomenal.

Is this review biased? Probably more so than most. Objectivity is hard when you’re battling with nostalgia, but the parallax backgrounds over the top of the 8-bit style graphics make this game feel advanced, and while the style is 8-bit, it has a smoothness to not only movement but even static imagery that is surprisingly deep, showing that a lot of work went into making a graphically pleasing game that still tried to disguise itself under the 8-bit monicker.

Shovel Knight is not exactly groundbreaking, as it does not really do anything new, but it does so many tried and true things all together, improving upon them and meshing them together seamlessly, that this title is easily my favorite yet this year.