“Adventure” games can come in almost any shape or size and the cover nearly any topic out there. I am fairly confident that the application of the term “Adventure” game is tacked on to any title out there that is unique or does not fit definitively into a particular genre (like an FPS or RPG). Given that the “adventure” genre can have anything from a platforming game like Super Mario, to a puzzle game like Super Bomberman, to point-and-click games like AR-K and Indiana Jones and the Fate of Atlantis, the “adventure” genre is the largest genre with some of history’s most iconic games in it. AR-K is a title that tries to make its home amidst those great point-and-click adventures like Daedalic’s The Whispered World (check out my review here) or The Dark Eye: Chains of Satinav, but it caters to gamers with a much more light-hearted and comical adventure, foregoing the heavy and oppressive tones that you will find in titles like Myst and Riven. The question though, is whether AR-K manages to shoulder its way into a a massive genre with enough poise to stand out in a crowd of games. 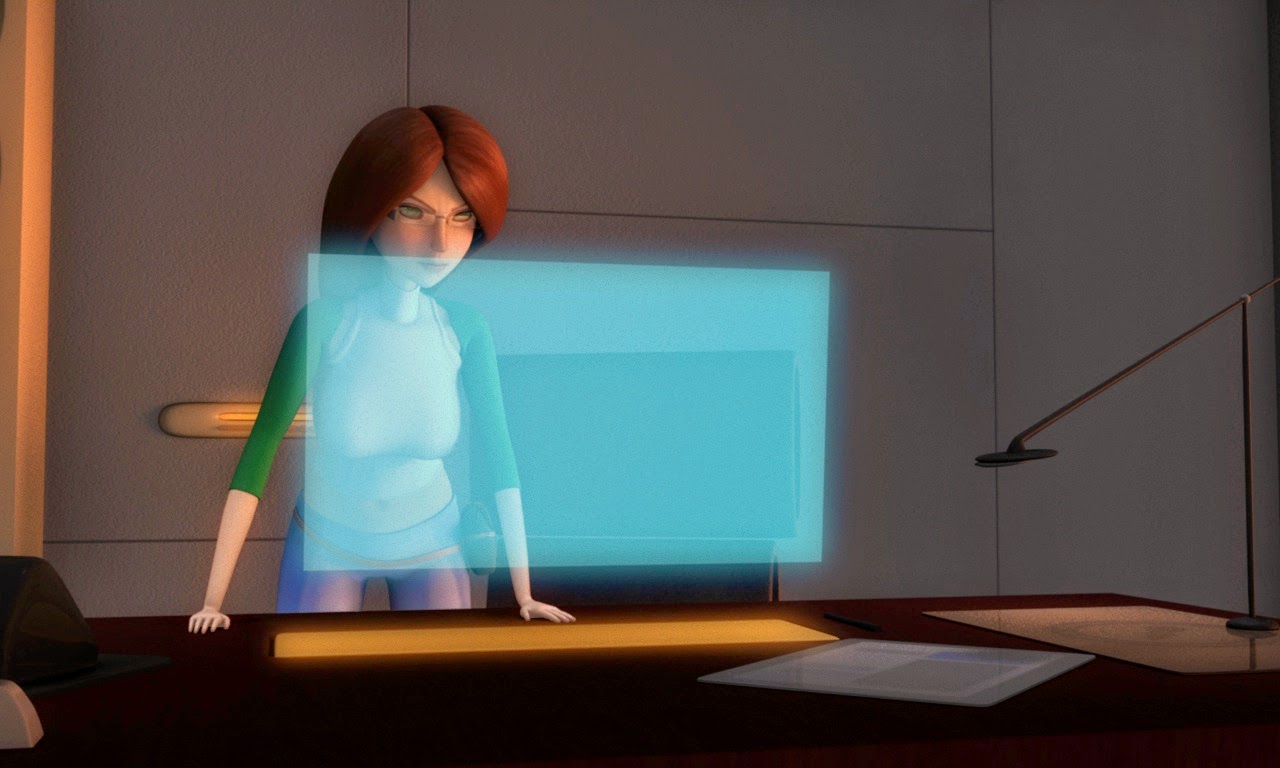 The first episode in the episodic AR-K point-and-click adventure game lays the groundwork for the world of the AR-K (pronounced “Arc”), a habitat that is designed as something of a perfect utopia, and it introduces the main character, Alicia Van Volish. Through the opening ‘credits’ you are given the back story as well as what becomes you first mission. The narrator goes on to speak about Alicia, as she is a former cop from a prestigious family of law enforcement officers. A stroke of bad luck landed her in a bad position and she chose to resign rather than face a judge and she chose to go to school for journalism, deciding that if she could not fight for justice directly, then she can report the truth so justice can be done.

During her school days she sort of, let herself go, or ‘enjoyed life to the fullest.’ Typical college parties and such, and this is where the game starts; after a particularly rough night of booze and a one-night stand. When you wake up the next morning there is a vague sense of having done something *wink* *wink* but clearly no recollection of the deed, amidst the massive hangover. Alicia then decides that she needs to learn more about what happened the night before because she vaguely remembers that something important had happened. This kickstarts your journey with the comical and foul-mouthed ex-cop/wannabe-reporter as you point and click your way through the AR-K’s Utopian environment, solving a wide range of challenging (yet fun and never old) puzzles in an attempt to discover who you happened to do the nasty with the night before. As you move through the game the simple quest of trying to remember your wild-and-crazy night unfolds into a mystery far deeper and more broad of scope that Alicia could imagine. 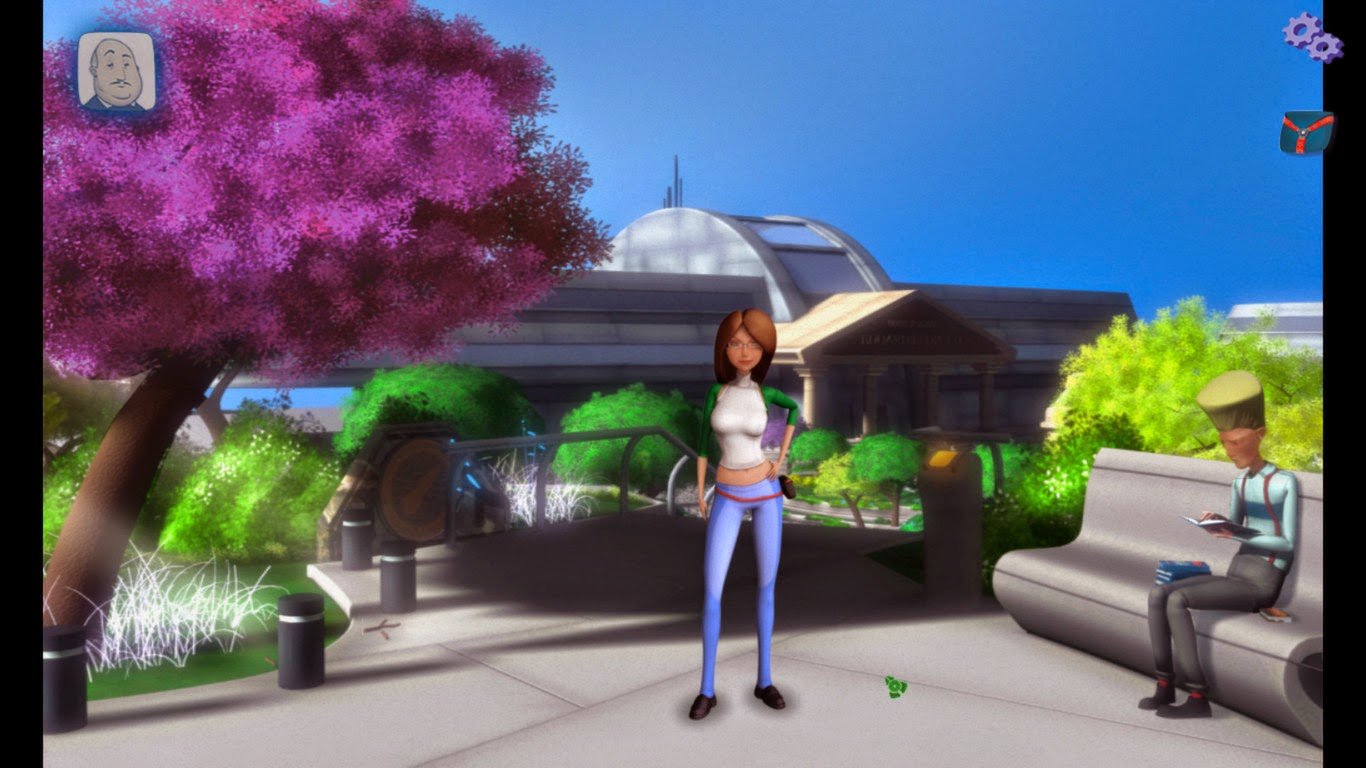 Graphically speaking you can tell that the first episode of AR-K was designed for the mobile platform (as it actually was) and at 1920×1080 the game, even with the graphics set to “Fantastic” is fairly mundane; at 1080p you can tell that the pre-rendered backgrounds are all being stretched to their limits to fit the larger screen. Setting the resolution to 1280×720 and running it in windowed-mode yields far nicer graphics as there is no stretching or disfiguring of the backgrounds; I played the entire game in windowed 720p mode because the graphics were far superior in that fashion.

The model designs for some reason remind me of a cross between classic Jetson’s characters and Pixar’s The Incredibles; this is not a bad thing, as I have fond memories of both, and it best describes the overall look and feel. A majority of the environments have that squeaky clean, rounded white appearance that you will find in any science fiction story, game, or movie where there is the “upper echelon” of society with their clean and fancy environments. There are a few scenes where the backgrounds are fairly dark and dirty as you wend your way through the story and it all fits in together quite well.

I was rather startled by the quality of both the music and the voice acting, though I would like to say a bit about the music. Oddly enchanting, the music helped set the mood for relatively confused party girl on a mission and the soundtrack was never distracting. This is a good thing because the voice acting in AR-K is wonderful and it took a moment to realize just who Alicia’s voice actor was, and when I found out, I fell even more in love with the character, as Ash Sroka brings a vitality to the game that is found in few others. 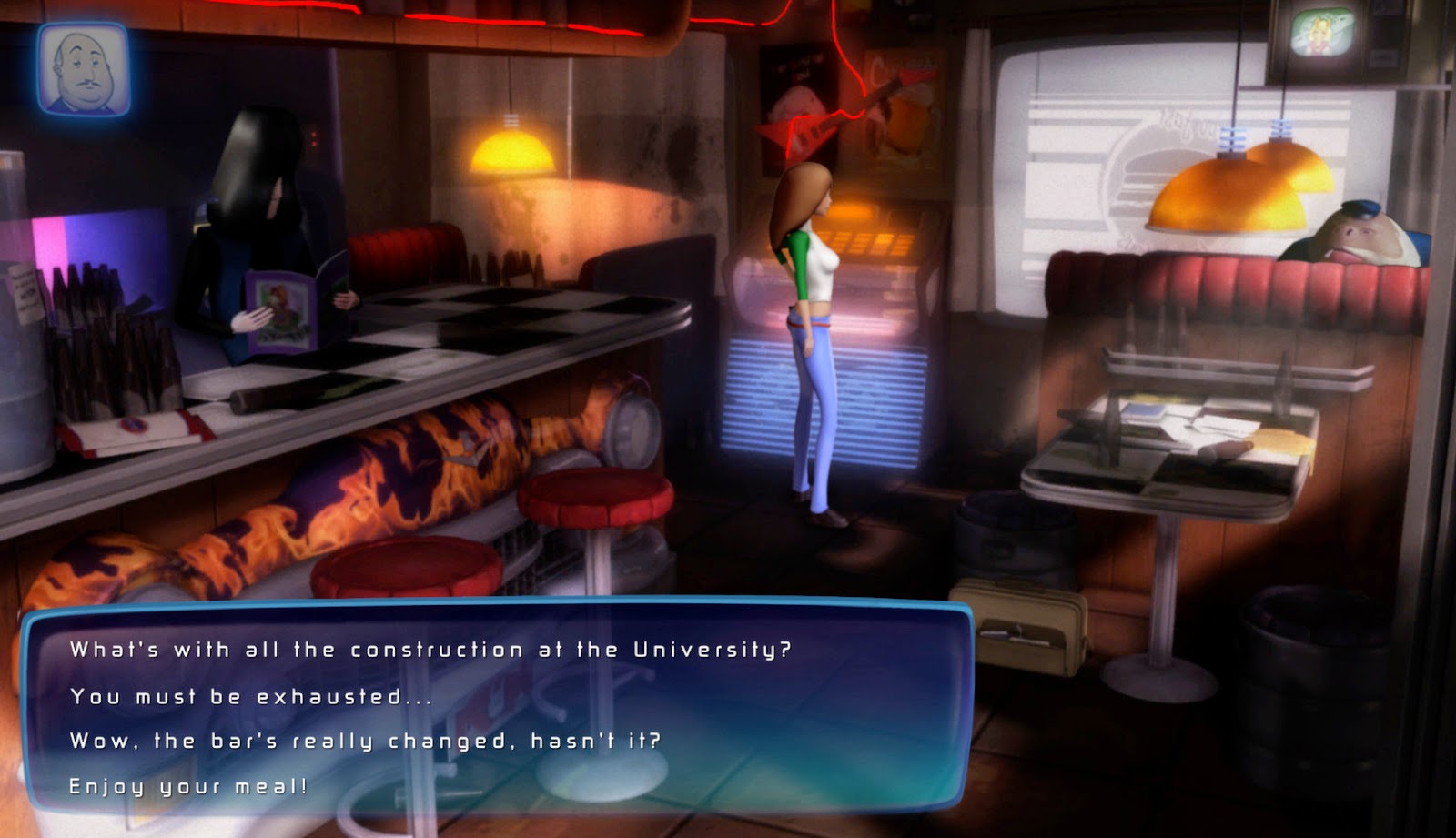 While not many gamers will know the name “Ash Sroka” a majority of them will know who Tali’Zorah vas Normandy is as the beloved engineer from the Mass Effect trilogy and one of the staunchest supporters of the much-lauded Commander Shephard was voiced by Ash Sroka. I really cannot say enough good things about the voice acting in AR-K and not just that of Alicia, but of all the characters that you will meet; each one is voiced carefully and with such professionalism that I did not hear a single line that sounded like it was read from a script. A job well done and a sure way to differentiate itself from the pack.

AR-K was a surprise for me and a totally unexpected treat as I knew relatively little about it before it came across my desk for review. I can say now that after playing through the two available episodes that I am definitely looking ahead to the upcoming episodes with excitement. With a fantastic story, spectacular voice acting, and challenging puzzles (that really require excellent detective work), AR-K is certainly one of the best point-and-click adventure titles that I have played in quite some time. Currently AR-K is on sale (as of the authoring of this article) on Steam, so I strongly recommend you swing over and pick it up from here.