There are some games out there that can be classified as absolutely crazy and Blue Estate is definitely one of these titles. The game acts as a prequel to the comic book series of the same name, taking place in the form of an on-rails shooter. The best description of this game would be from the game makers themselves and here it is! 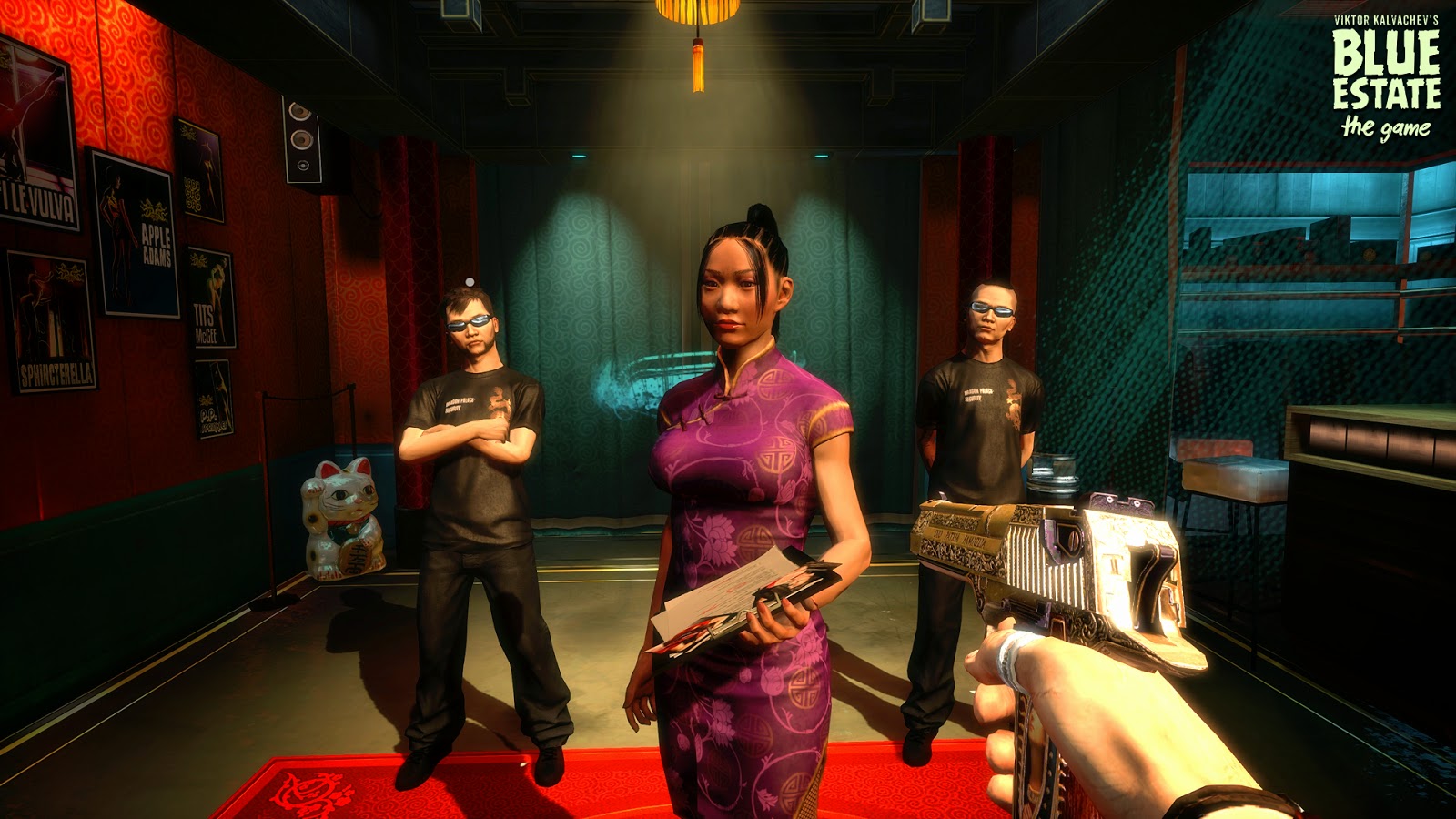 “Blue Estate is a darkly funny on-rails shooter with a crazy story about surreal characters, told by a clueless Private Detective, who’s being investigated by the Federal Bureau of Procrastination. It’s funny, ridiculous and unpredictable, bringing back the joy of arcade light gun shooters to the next gen consoles. It’s not to be taken seriously, but consumed as a shot of entertainment with a killing spree twist.”
– Blue Estate The Game Website

Typically when thinking of an on-rails shooter, I tend to recall an arcade machine either within an actual arcade (where have all of these gone!?) or a movie theatre entry hall. Being moved around parts of a stage is still slightly strange to me, however sometimes it is nice to not have to do the moving. I mean what’s better than sitting back and… who am I kidding? You are either sitting on the edge of your chair or leaning against the arcade machine ready to shoot anything that comes your way. Blue Estate does this exceptionally well especially considering that it pulls this off using the Dual Shock 4 controller and not an actual motion controller, which could have been pointed directly at the screen.

Generally people have a place to start, but I find myself at a loss for Blue Estate because everything about it was brilliantly executed from the level designs and dialog, to the gameplay and controller implementation. The great thing is when game does not take itself serious, it can make for a much more enjoyable experience because the designers can be every bit as ridiculous as they want. Just look at Nippon Ichi Software’s “just about anything” for that one. 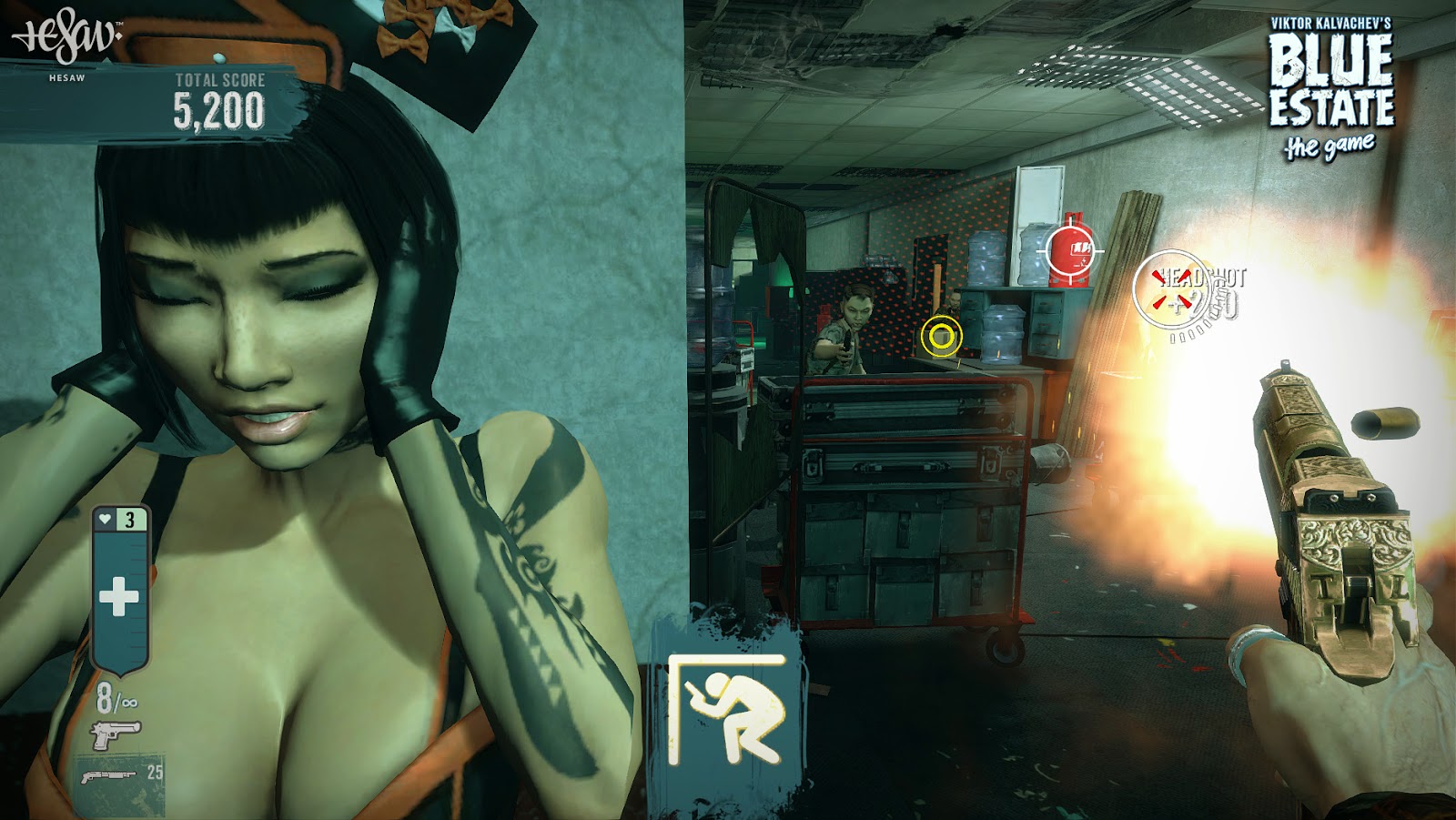 The levels within Blue Estate work themselves out very well, even if a room is visited a few times because it never feels repetitive as you are coming at it from different points or vantages. Each level is rather lengthy and they are switching things up constantly by changing the pace. Examples include standing out in the open, to running or jumping over and between obstacles, and then diving down into cover. Cover is done especially well as portions of the levels are destructible, which can change how to approach a situation such. For example, you can choose a tactic such as shooting through the pillars and laying the enemies flat.

Keep in mind however, that the destructible environments can work against you as well if you chose to remain in one spot too long and your enemies also attempt to take advantage of your enviornment. Hidden within each level are objects that can be destroyed for bonus points, which are calculated at the end in the form of a multiplier. Sometimes however, these bonus objects are very well hidden or require fast enough reflexes to pick off as they are only shown for a second or two. These additional elements help to make level scoring much more challenging as it’s not just about taking down the enemies efficiently, abut about dropping the enemies efficiently and picking off bonus targets.

Blue Estate changes up the narrative aspects throughout the game as well. Sometimes it’s the narrator. Sometimes it’s the main character. Sometimes it’s the FPS warning label more or less breaking the fourth wall to show it’s own comment on a situation, which pauses the scene. These last ones are almost all absolutely hilarious in their own right. Regardless of where the dialog is coming from, written on the screen or voiced, it keeps each level entertaining as it supplements all the shooting which while fun, could get boring if left to itself. Having added the numerous jokes and comments helps to keep the pace entertaining. 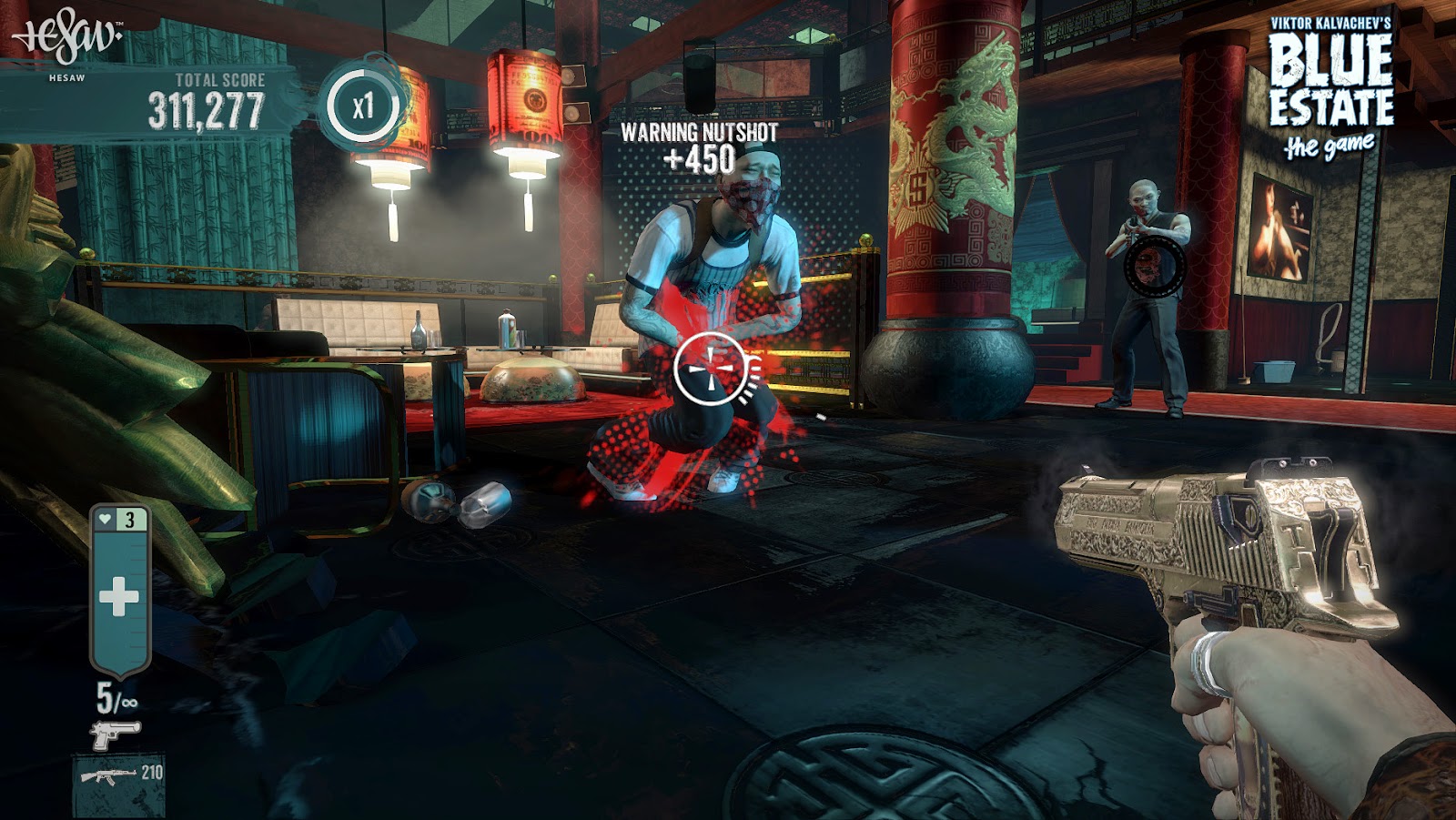 Controls for Blue Estate are rather smooth for a game that doesn’t have a “pointy end” to direct to the screen. The Dual Shock 4 controller handles extremely well and feels natural using it to point at the screen. The only issue that ever really came up during gameplay was not with the game’s software, but with where I was physically sitting. As it’s only natural to move around as you play, sometimes I found myself out of alignment with the system. Thankfully there is a quick way to re-calibrate the controller by using the L1 button.

Gameplay itself is straightforward as you point your cursor at the enemies and fire your weapons. As the levels progress and more and more enemies come at you, yellow targeting circles appear around the next enemy that will successfully fire at you. These yellow circles allow you to make a choice of either taking a hit and finishing up with the rest or taking them out in the order to make sure that there will be no getting hit.

In regards to shooting at the enemies, your default weapon is not as powerful as other possible options that can be picked up along the way, such as shotguns, sub-machine guns, assault rifles, and the like, but it does have unlimited ammo. For these other secondary weapons, ammo crates can be picked up here and there along the way as it presents the this dilemma:  do you want to use the current weapons or keep them in reserve for when you might really need them. Health packs can also be picked up throughout the levels as well.


The last gameplay element that discuss is the Dual Shock 4’s trackpad, which is used for a variety of actions. Picking up ammo and health can be done by swiping in the direction of the arrow being shown while moving “hair” out of your face using an upward sweep. When running and dodging obstacles, the track pad shows action sweeps that must be performed before either running into something or falling into a hole.

Overall Blue Estate is an awesome game that as an overall package is a blast to play – as long as it is never taken seriously. If you come into it with an open mind and do not mind plenty of crash humor, you should enjoy it if action on-rails games appeal to you. However, some may still find it offensive, despite the M rating for Blood, Crude Humor, Drug Reference, Partial Nudity, Sexual Themes and Violence. In other words, this is clearly not a game for little kids and if these things bother you, Blue Estate is probably not the title for you.