Moving Player released a new title for the 3DS on June 26th, and called it COCORO Line Defender. If you are not familiar with what a line defense game is, think ‘Swords & Soldiers’ style gameplay, with less focus on individual units. You only have one ‘ability’ that you can use, and it is on a long timed delay between uses. Outside of that, you select the unit, equip it with a weapon and fling it into the battlefield again and again.

Set in the COCORO islands, gameplay is done in the style of four elders, one from each of the four classical elements, each recounting a war from their history. It is said that history is written by the victor, but in this case, since all four are telling the stories, and you control each in turn, it is hard to pick out, from the convoluted mix of contradictory tales, what actually happened. An element that had the opportunity to provide some depth to the story, instead of simply a “now go here, and destroy our enemies with the *insert new upgrade here*!” that you will learn to skip over entirely by the time you are on your second or third element.

The extended description offered by the dev team states ‘more than 90 unit combinations’ will be available to you. The problem is that each of the four unit types are the same between the elements, with little more than color and sprite differences to differentiate. There are a total of 6 weapons per element, but only one of those, the last one, is specific to that element, too! Instead of four elements, four units and six weapons each, it equates to more to four units and eight weapons (sword, club, javelin, sai, staff, bow, spear, and the element specific one) which maths out to 32 combinations.

32 unit combinations still makes for a lot of diversity of gameplay, though, doesn’t it? In most cases, yes, but the gameplay in COCORO Line Defender is such that you want to flood the battlefield with either the most powerful unit at your disposal (the slowest to produce) or the least powerful (the fastest to produce), at any given time. Yes, the choice is still there, though, and even with an effective total of twelve units by endgame (if you want to pretend that more than just 3 weapons are worth using), I did not really tire of the same campaign played again and again, until the fourth iteration. 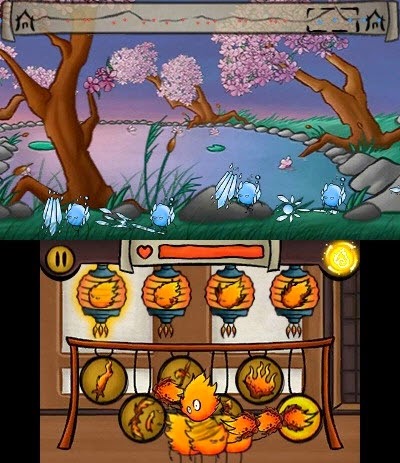 Fourth iteration? Well, you see, COCORO Line Defender’s gameplay is such that you start out with one unit and one weapon. You can spend orbs (points, experience, etc) to upgrade your weapons, making them more powerful. The result of this is that sometimes it feels like it comes down to pure repetition. You play a round and you either win by a landslide or you get curb-stomped by the opposition. Win or lose, you get some orbs, spend them on upgrades, then start the next battle (or retry the same one, in the case of a loss).

The result of this is that you play a difficult level 3-4 times to get the orbs to upgrade your weapon, and then it no longer holds a challenge and you can win without really watching the top screen (where the action happens) at all. This grinding for orbs, as well as each element starting off at the very beginning of a mostly identical development cycle, makes this game feel artificially extended in a very obvious fashion. Still! Far be it from me to shy away from a grind! Hours in, I have each weapon fully upgraded for each of the four elements, and nothing in the game holds a challenge for me any longer. To be truthful, only about two or three weapons ever got used per element, too, which lands me at a somewhat disappointingly shallow swim in the kiddie pool, immediately following the two-story diving board climb. 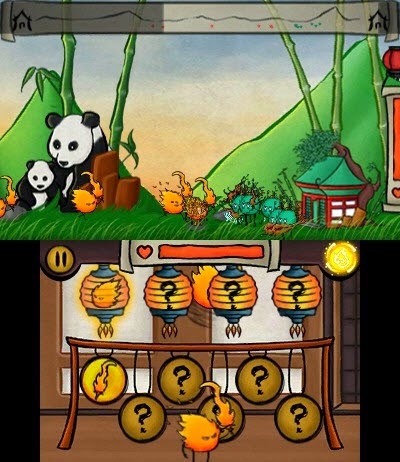 COCORO Line Defender’s gameplay is simple but enjoyable. Some obvious means of improvement would be to remove the orbs system altogether and just upgrade the weapons a little bit after each stage. Losing is not fun, and losing to get the orbs to win is doubly not fun. Each element should have more flavour than just the final weapon, especially if you want to claim over 90 combinations. The same goes for each element’s units.

If you are looking to burn a weekend in a grind, or an evening in casual mindless flinging, the game is enjoyable. If you happen to be looking for a story, plot, or changing gameplay, keep moving.