Time has been used… time and time again (sorry I couldn’t help it) as a mechanic within storytelling. Time is generally a constant within the human perception. Every second, of every minute, of every hour is something that we tend to worry about with our generally short lifespans in the grand scheme of things. Time within games is usually used to gauge how fast something can be accomplished or how much time is left to accomplish a goal. Time has been used to either speed things up, slow them down, or even stop them for a moment. What if time stopped however? What if nothing but you were able to move while everything else remained frozen? Constant C is the story of this “what if” scenario. 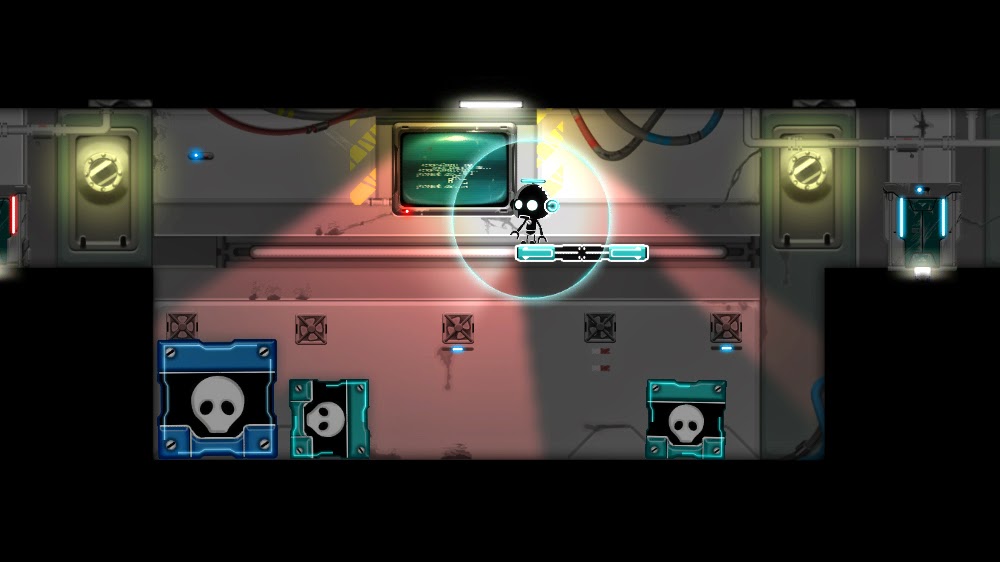 Scientists while performing some experiments (a typical setup for something going horribly wrong) somehow managed to freeze time within the space station that they occupied. Waking up after an unknown amount of time, you play robot who makes his way through a portion of the station until he meets the master computer who isn’t quite sure how things happened but does let you know that if you can acquire enough memory tubes for him, he can figure out a way to fix everything. This is where the adventure starts off.

Constant C takes the often-used theme of “worlds” and divides them into sections of a space station. Each section contains challenges different from one another as the master computer unlocks them for you while you are tasked with bringing him more memory tubes. These new sections are increasingly more difficult as new traps and functions are added to either help or destroy you. New sections may only be unlocked after a certain number of memory tubes have been brought to the master computer. Needing these memory tubes makes it that you can never go too far ahead without proving that you have the skills required to continue on your mission to set things right… or at least find out what happened. Someone did mention something about black holes… well our old classic black holes as there’s been some disproving of late. 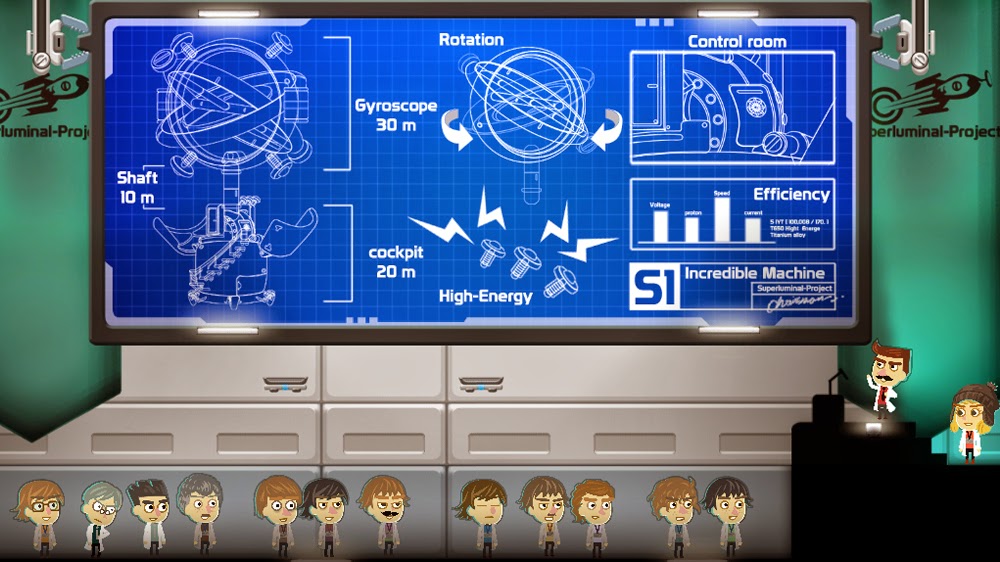 Obtaining memory tubes and making it through the space station while sounding easy, is really a challenge in and of itself. Being a puzzle platformer, Constant C provides two major elements acting as obstacles that can lead to either success, or the repeated destruction of your robot. The later can be seen as scorch marks on the walls every time you fail.

The first is time. Somehow being a robot has excluded you from being frozen in time but just because you are not, doesn’t mean everything else can be affected. The master computer not being able to move around, grants you a small sphere of regular time allowing you to manipulate objects as they are within your sphere. This ability can be a blessing and a curse as while it can reallow a platform to start moving again, bring pinball like levers to help slow your descent, just it can also drop giant crates down onto you putting you out of your misery which leads to the second element: gravity.

Gravity, plays a major role in Constant C. The time bubble that surrounds and allows things to move again can sometimes cause you to either have to restart a level or to allow you to complete it by riding down certain objects for a set of time before jumping off onto another object locked in time. The platforming elements are based in gravity puzzles followed by time puzzles as the bubble unlocks various objects as you draw nearer. The last and unfortunate part of gravity is that it likes to pull things down. Unfortunately for you, it does not appear that our little robot protagonist was built very sturdily. If you fall from too far up, more wonderful scorch marks can be seen on the wall behind where you fell. Thankfully Constant C supports rather quick load times meaning that if fail repeatedly, you don’t need to wait overly long to try again. 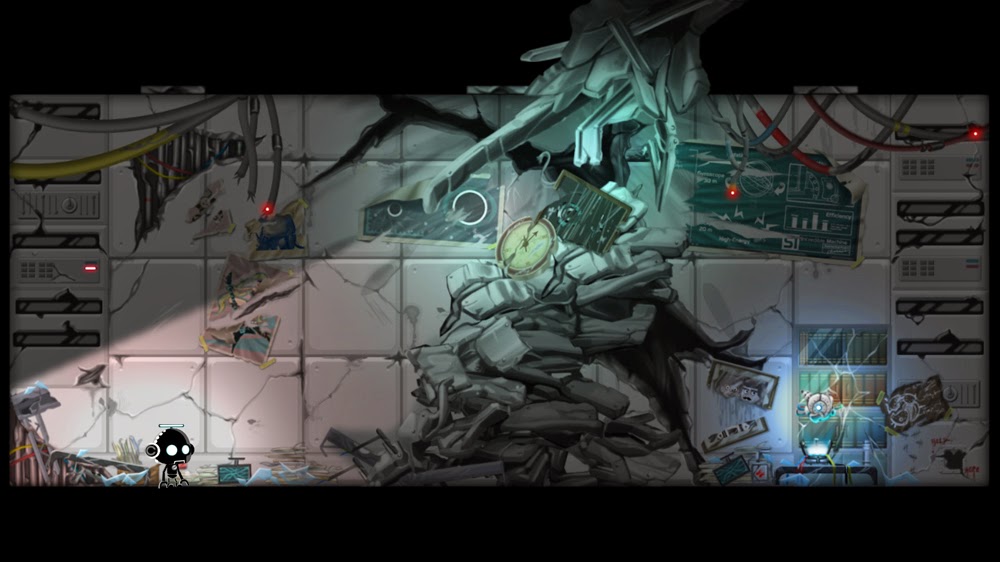 The last gameplay element, which also falls under the gravity element, is the rotation of the space station. Starting off, levers can be found that either rotate in either 90 to 180 degrees – sometimes causing some panic or a facepalm depending on how dumb you may feel after what could possibly have just been a not quite so smart move… on your part of course. These levers add challenge to not only reach the door to the next stage, but also to obtaining the memory tubes. There is always a way to get from one point to the next, but figuring it out is the hard part. Eventually there are locations where these levers do not exist, but instead a controller is obtained that allows you to rotate in the 90 or 180 fashion as needed.

While the previously mentioned memory tubes allow for the master computer to find a way to solve the problem, it also grants additional information.  After the collection of xth amount of these tubes and unlocking new locations, cutscenes may also be unlocked that showcase conversations between different scientists prior to this accident. Some of these can be rather entertaining and it adds another level of charm to Constant C while giving it more depth than just the one-side conversations between you (silent protagonist) and the master computer. 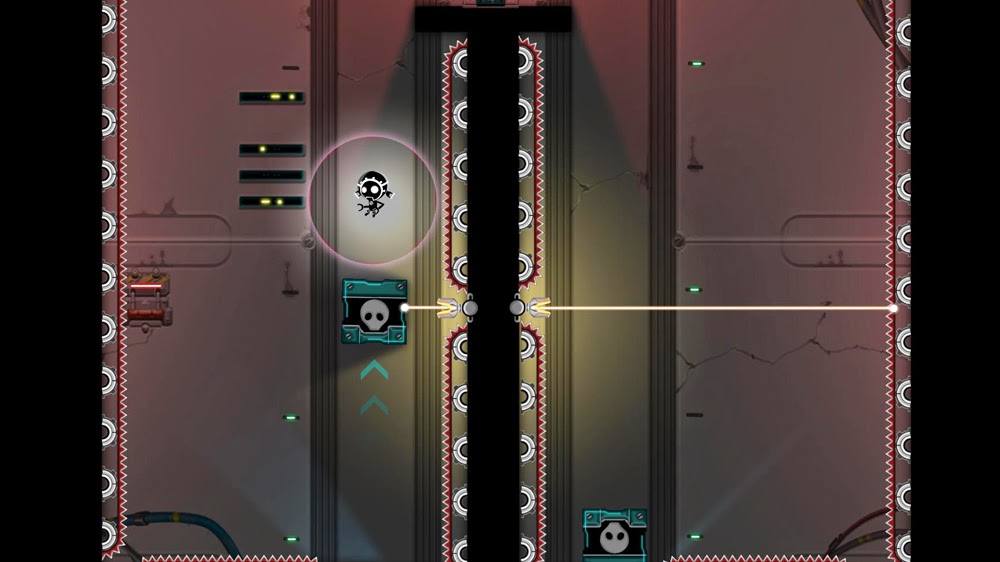 Constant C does not have many downsides to it. The gameplay elements of time and gravity are pleasantly challenging, while the dialog between the master computer and your robot are more often than not entertaining. Where Constant C can be a bit frustrating is that sometimes your robot, if he’s too close to the ledge, will just slip right off . This in turn adds more scorch marks to the various walls of the space station. The same can happen with certain jumps that you were quite certain you should have made, but didn’t. These thankfully are not very common occurrences and occur less and less as you get a better handle on the restrictions that your robot has. The only thing that might cause some real grumbling is that if you jump instead of walk off certain ledges, it can be the difference between making it down safely due to the distance.

Constant C is an interesting puzzle platformer that does something rather new and unique with time as it makes it go forward in a space that has been frozen from it. From the pleasantly challenging puzzles, to the more intensive thought processes for the memory tubes, it is a fun and entertaining experience with plenty of charming dialog.

Posted by Pierre-Yves
Follow:
Manager and Senior Site Administrator—Currently a reviewer for Chalgyr's Game Room covering all platforms
Previous Article Agarest: Generations of War – PC Review
Next Article Destiny checks all the boxes – but is it enough?