The darkness has been punishing, almost oppressive. Multiple tunnels led to murky shores, perilous cliffs and a host of strange, violent creatures. I dared to follow the nearby footprints near the beginning, and I was nearly slain for my curiosity. Caution is key because success is never guaranteed. However, there is quite literally light at the end of the tunnel. Upon reaching the end of said passage, there is an almost hauntingly beautiful expanse of land before me, stretching out to a village that is quiet and almost – but not completely empty. Still, there is a sun in the distance, fighting to get free of the clouds in the sky. It is a sign of hope, that perhaps my struggles will not end in vein.

I continue through the village and near a well that likely has no water. I have fought dozens of battles, cheated death multiple times along the way, and now I have some much deserved respite before setting back off onto my path.

At least, that was what I thought moments before these angry little mongrel creatures charged me, chasing me through what I thought was an otherwise safe village. I hacked at them repeatedly, but that just seemed to tick the rest of them off because before long all of my carefully planned strategies were ruined because I had forgotten two very simple rules of the Souls series:

Yet I can never get enough of it. 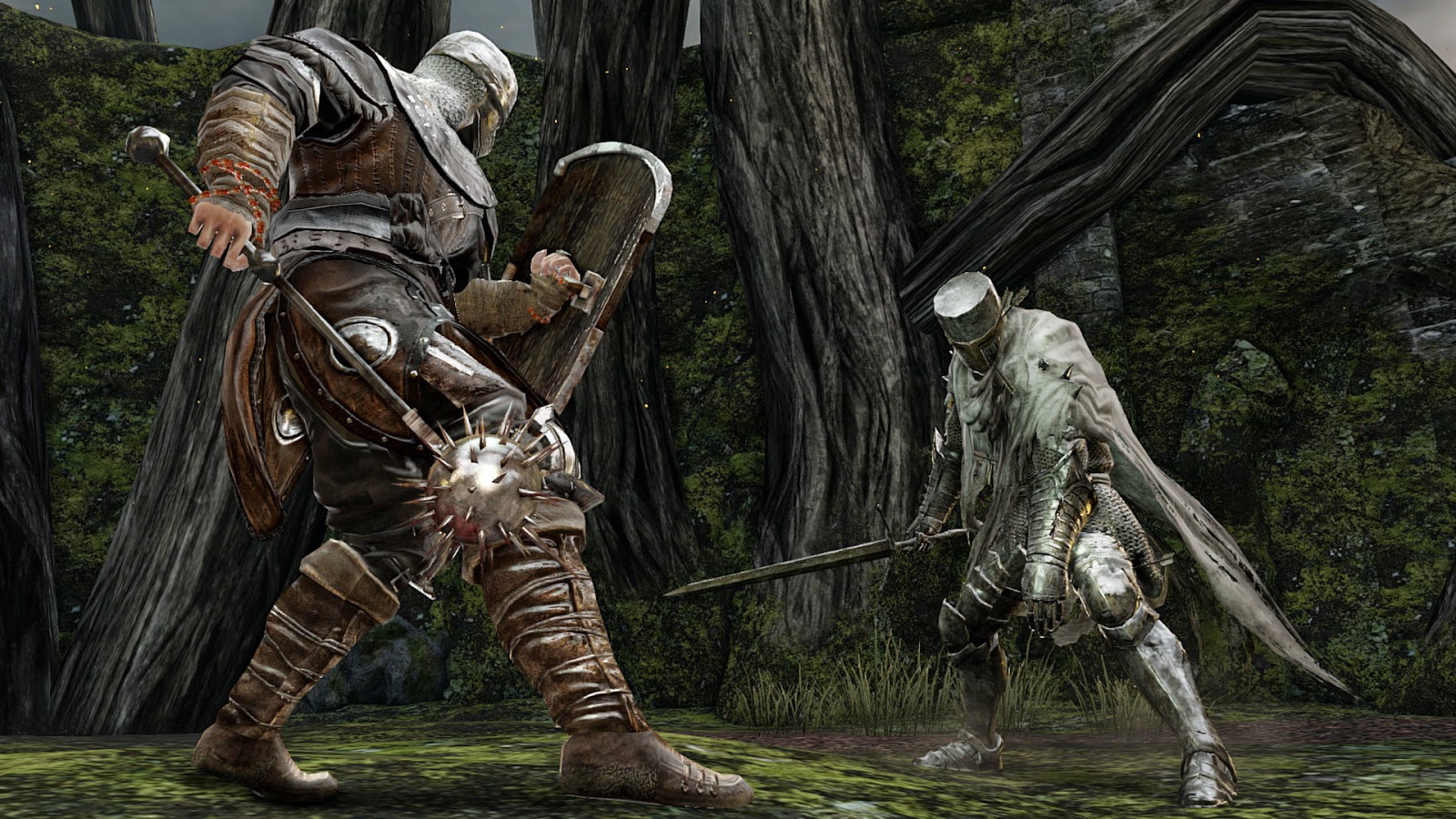 That is probably my longest lead-in to a review ever, but this explains my first experience with Dark Souls II. I had an opportunity to play this title on PC when it first released, and only recently had a chance to pick it up again, this time on Xbox 360. While the textures and framerates on the PC are superior to what the Xbox 360 can deliver, the atmosphere found in Dark Souls II is much more than just how crisp a piece of fabric looks up close. The experience is just as gripping now as it was then. Certainly the visuals are a factor, and while they are not the most potent in gaming history, they certainly do a wonderful job of conveying the gloomy atmosphere of the series. Dark, dank, twisted – these are all adjectives that can be applied here as well as to the earlier Souls titles.

One thing that stood out to me however, were the moments of beauty. Certainly in Dark Souls II, you will find more sunlight glistening off of watery waves, fields of green grass and ancient, beautiful trees than the eternally somber world of Demon’s Souls. These moments are akin to when I wandered into that first village, looking around and feeling as though my character had finally found some sort of solace from the nightmare world he now inhabited. Dark Souls II is just as good as ever at punishing a player who lets his or her guard down for any length of time. Threats come in all shapes and sizes, from boulders being rolled toward you, to ranged enemies shooting crossbow bolts or lobbing fiery potions at you, to traps, monsters and more. Oh, and don’t forget about those other players, looking for an opportunity to sneak into your world and prey on you. The player versus player aspects of being connected are still alive and well here. 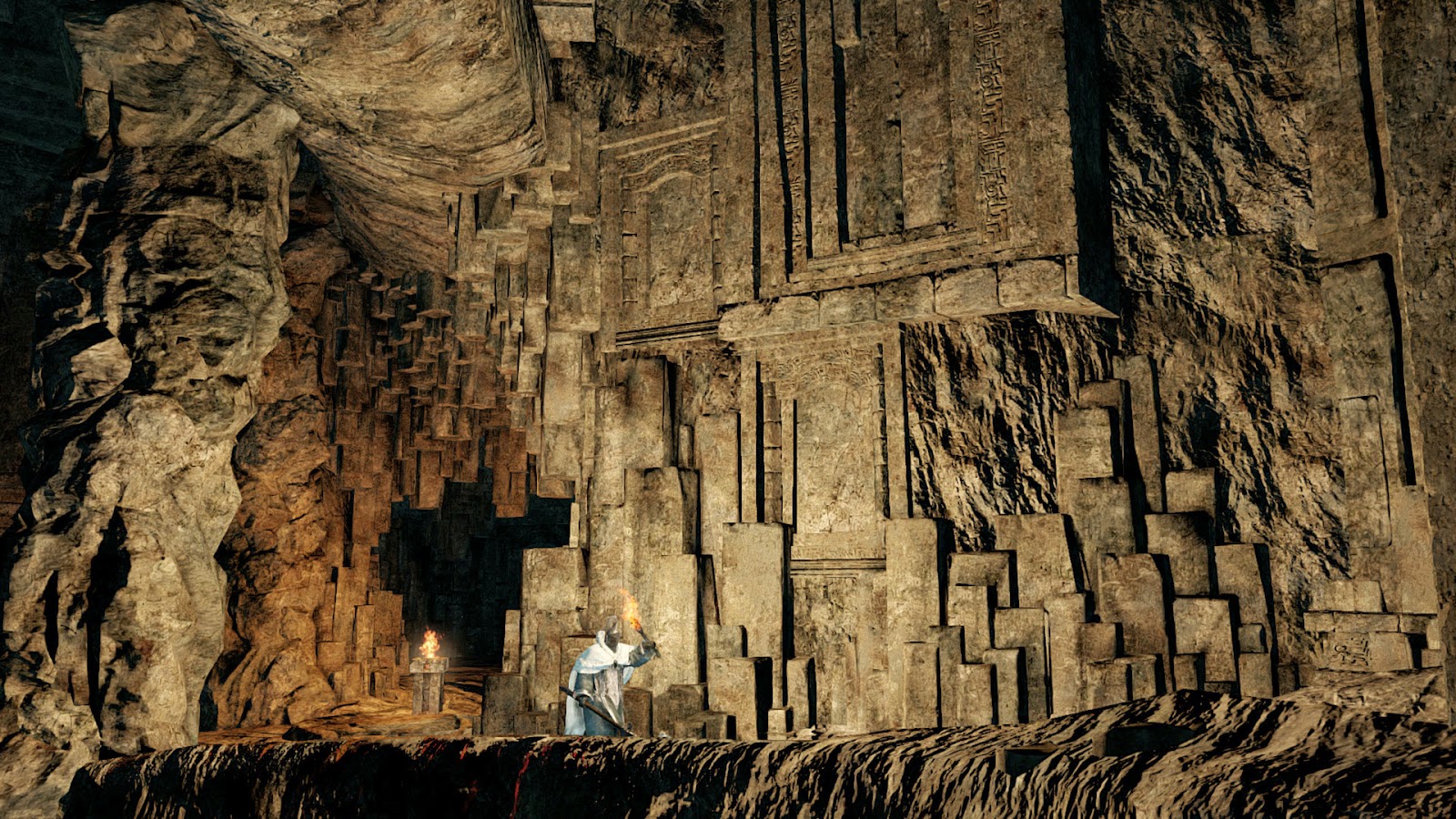 Dark Souls II is a game that is meant to be connected. You can of course take your adventures offline, but the experience is not the same. For one, the ever-present threat of being invaded should keep a player on their toes, but there are opportunities to lend your skills to someone else, or ask for the aid of another similarly leveled player for some of the game’s incredibly challenging boss battles. The messages scrawled into the ground have always been interesting (and sometimes quite helpful – while at other times proving quite misleading), but more than anything I have always enjoyed touching the ghostly appearances of other players.

These can occur in two flavors. The first is to touch a bloodstain and then watch the player’s last few moments of life. Sometimes you see utterly ridiculous behavior such as someone who attacked a friendly NPC or simply jumping off of a ledge. Other times you are given a show of poor luck, where a player perhaps tried to doge and roll out of harm’s way, only to roll right off of a ledge. Quite often those same bloodstains saved my tail while entering a new area and I noticed a bloodstain where someone carried on down the path a bit further only to be felled by some hidden opponent or sprung trap. No doubt my own bloodstains in someone else’s game provided the same sort of lesson learned at my expense. 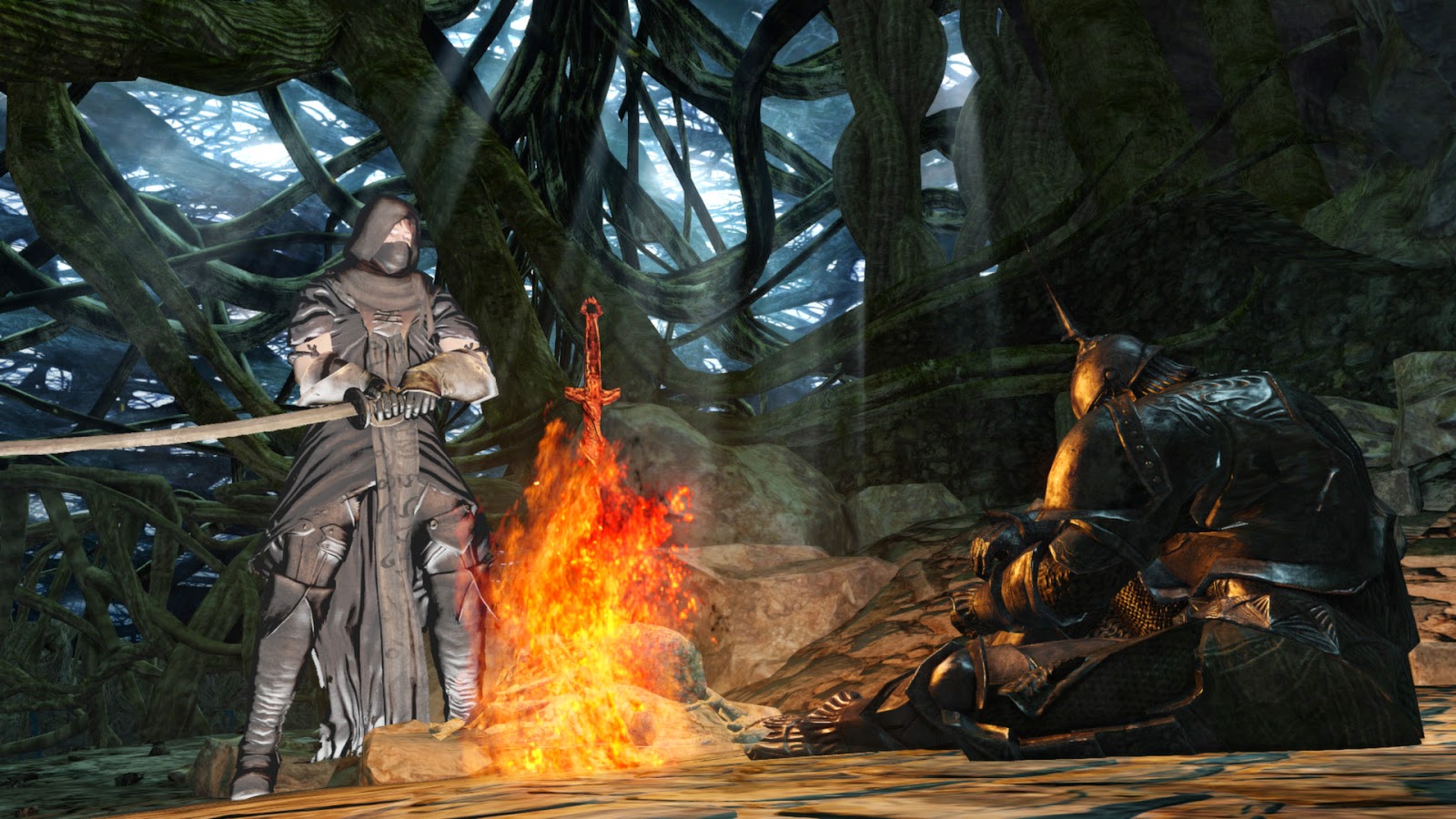 I have always enjoyed the ghosted images of other players that flitted in and out of sight in my plane of existence as well. These are fleeting apparitions, moving through or around me, each player toiling away at the challenging existence that is Dark Souls II. These figures appear most often near campfires, which serve as one of the few somewhat safe locations in each level. Here these bonfires reset the level and give you a chance to reset yourself before going on ahead. They also serve as fast travel points, once they have been discovered. The ghostly appearance of other travelers huddled around the same fire for just a few moments creates the same feeling that the sunlight in the horizon did.

For just a few moments you are not alone. There is perhaps peace in the world. Your journey might not end in death this time.

It never lasts, as your weary character eventually rises back to his or her feet to once again brave the challenges ahead. 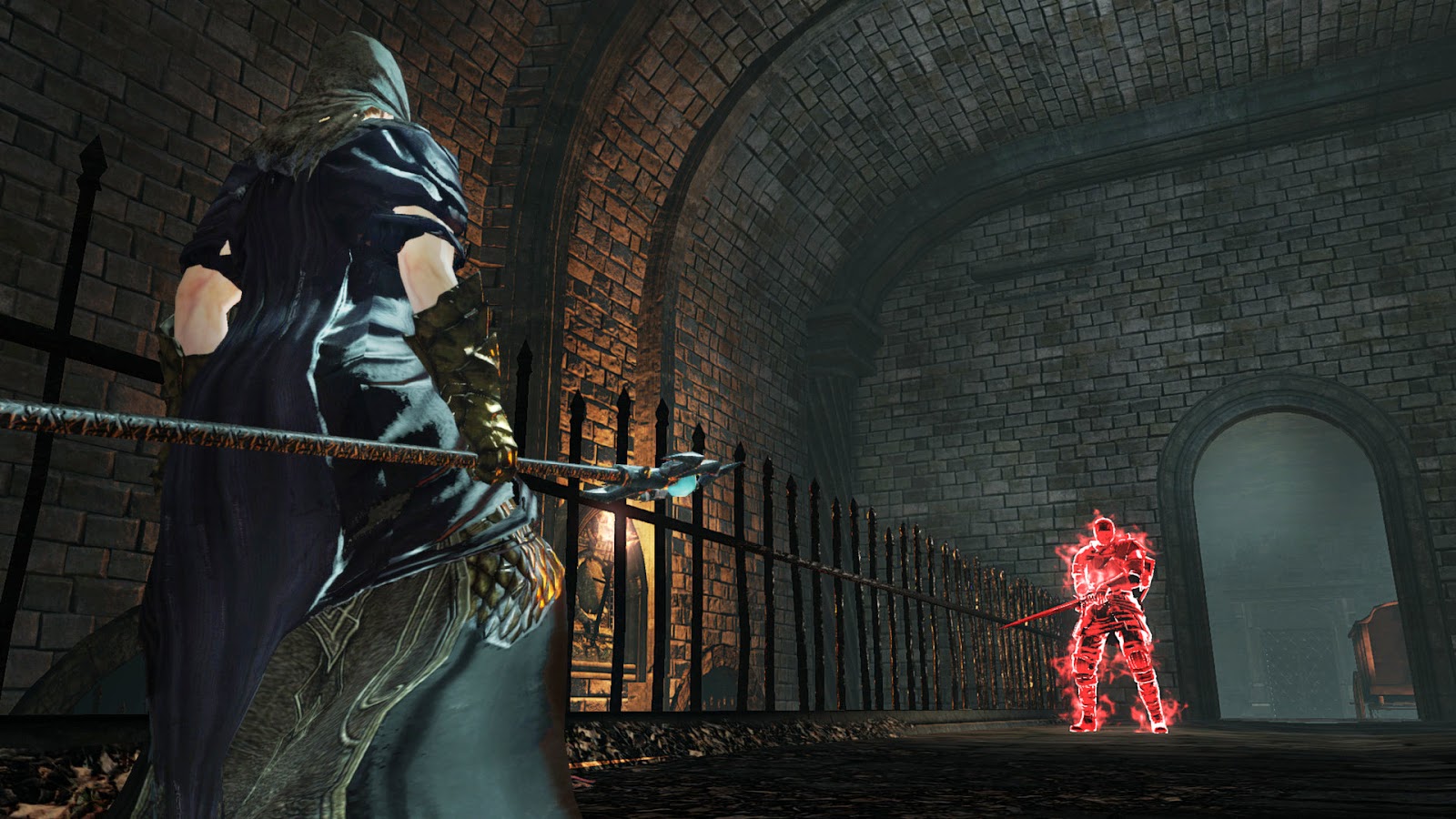 The fast travel is a point of contention for some people, but I find it to be a perfectly fine game mechanic. It may not be the most immersive one, as you jump from one point to another. However, this allowed me to spend more time moving forward with my adventure and less time recovering old ground that eventually would come to feel like needless padding.

I mentioned that I had played Dark Souls II on the PC once before, creating a single character that I stuck with by and large. Two aspects of Dark Souls II really help to show off the replay value this game has, as I decided to craft a completely different kind of character for this Xbox 360 review. The variety between play styles can be quite significant, depending on if you like quick, short attacks with nimble rogues or bulky, heavy, tank-like fighters or prefer to lean on magic most of the time. The dual-wielding option is a completely viable play mechanic now, and it is a lot of fun. It can be taken advantage of by enemies in much the same way a sword and board or a two-handed weapon user can be – no one-size-fits-all approach will get most players through to the end, but I thoroughly enjoyed experimenting with my characters. 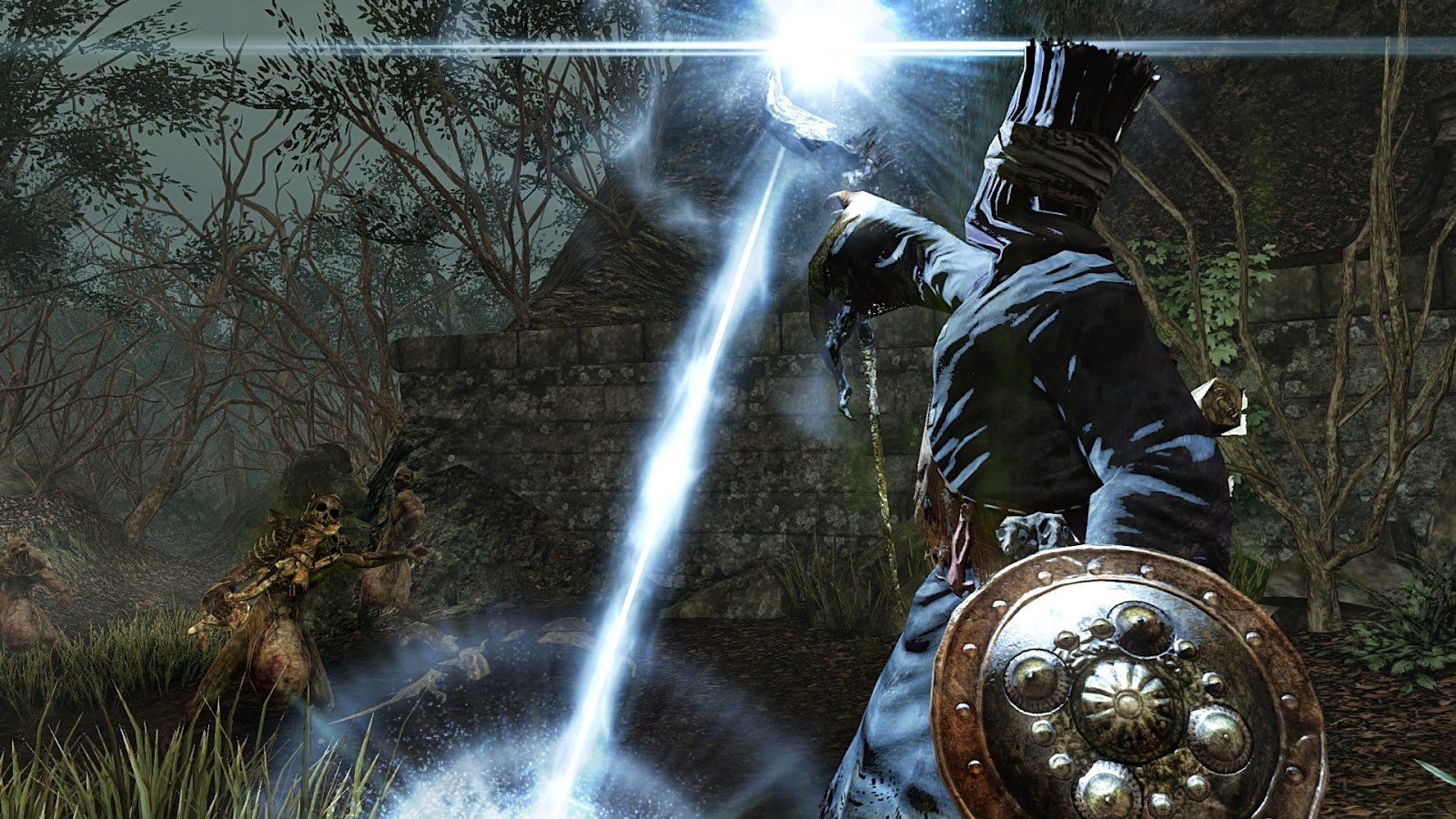 The world itself is full of things to discover while exploring. I played Dark Souls II on PC right when it first came out. I found a wide variety of new nooks and crannies during my Xbox 360 escapades. I knew a few of the tricks to avoid or come back for later – like the knight at the base of the tree. I came back for him a bit later when I knew I would be better equipped to deal with him. Not all obstacles have to be approached in the exact same way, and there is plenty of freedom to explore. Certainly some paths are easier than others until your character has grown stronger, but I purposely set out to do things differently this time, and Dark Souls II was every bit as rewarding this time as it was before.

In the end, that is really what all the titles in the Souls series have been about, and Dark Souls II is no different. The many challenges and deaths make Dark Souls II a difficult but worthwhile experience where your skills sharpen continuously while trying to find that light in the darkness, that one true moment’s rest where your quest will have proven most rewarding indeed. 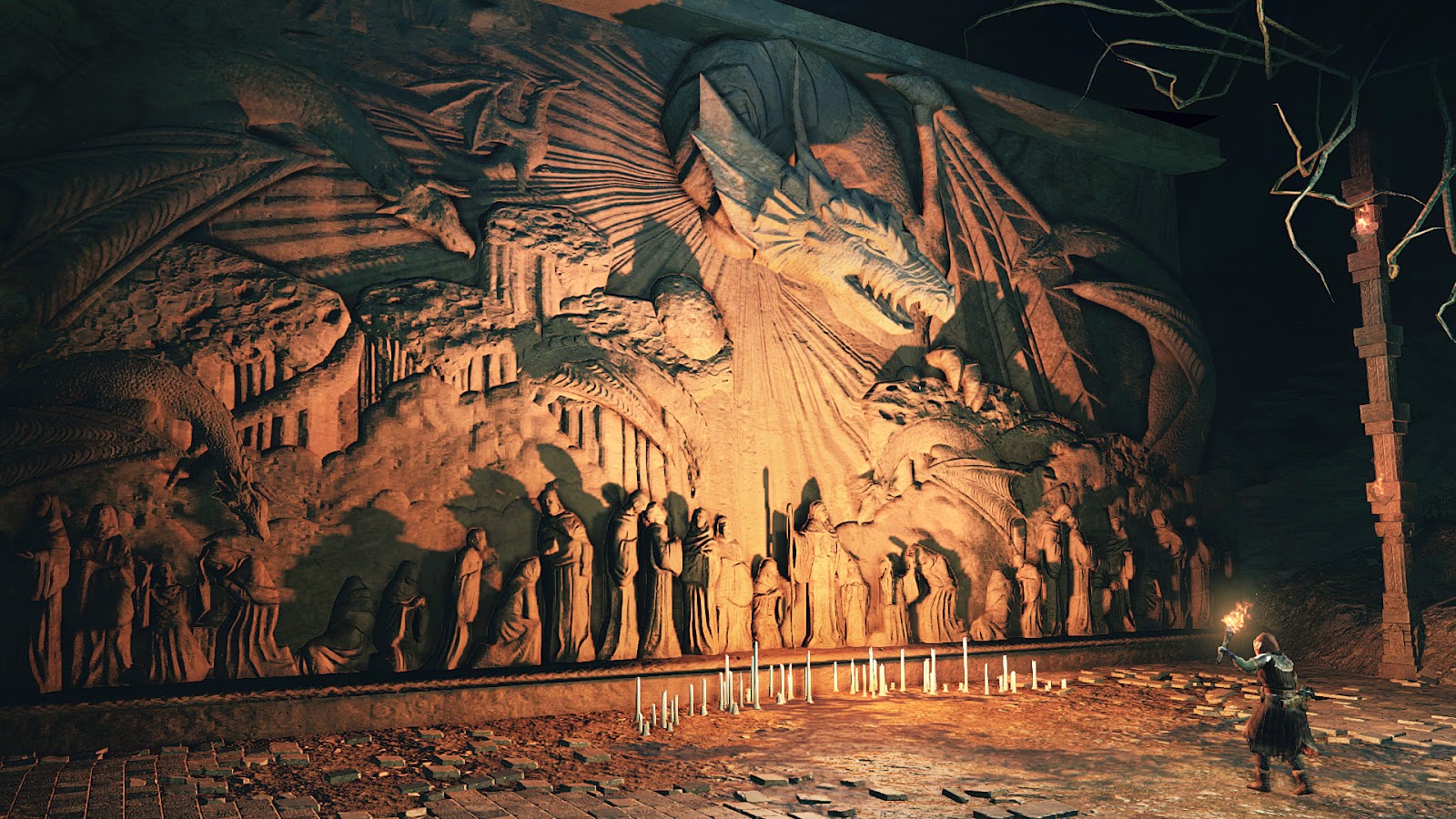 Kill me once, shame on me.

Kill me twice, I must be playing Dark Souls II again.

Crown of the Sunken King is an excellent bit of downloadable content that can take better than four hours to completely clear out. The same thick, heavy darkness that fills the primary adventure of Dark Souls II is alive and well here. This time you are given access to an underground temple that introduces a variety of new creature that by themselves might prove a challenge, but in groups will often prove deadly.

The layout has changed in this expansion, no doubt due to its self-contained nature. There was a sprawling, stretching path to the care gameplay in Dark Souls II. Some of the clever level design used to create shortcuts through the world of prior Souls games was lost in Dark Souls II, but that same ingenious level design returns in Crown of the Sunken King. 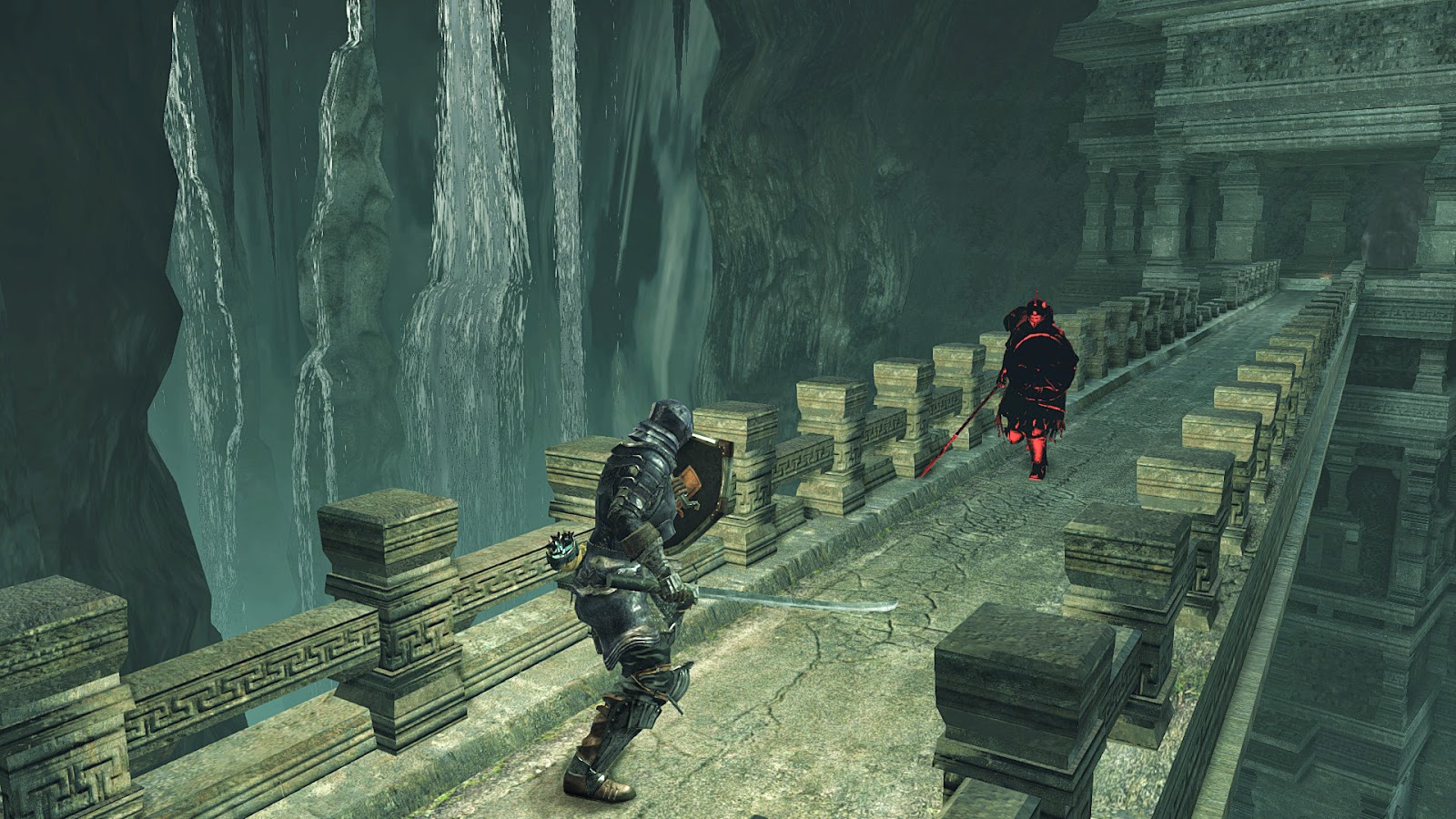 There is a lot of area to be explored, often at different heights. The temple’s layout also serves as a sort of giant, moving puzzle. The design of the temple is visually impressive, but the way it raises and lowers to help solve different types of dilemmas is both maddening and thoroughly entertaining. This, coupled with new bosses (one of which was brutally, aggravatingly difficult) help to stretch out and add to the Dark Souls II experience – something that certainly appeals to me.

The first of these DLC packs is absolutely worth getting your hands on. Just prefer to die again and again. It will be worth it. Both the core game and the DLC are ranked the same in my mind, with a score of: