Dark Souls 2 is the sequel to 2011’s incredibly difficult yet utterly fantastic Dark Souls, an action RPG that was the spiritual successor to 2009’s Demons Souls. The developers of Dark Souls, From Software, has taken the action role playing game back to its roots. Over the years, games in general have been toned down in terms of difficulty and added features like auto-saving and the checkpoint system where twenty plus years ago we did not have checkpoints and when we entered a dungeon we may find one, at most two save points in the entire dungeon. In those old role-playing games you would need to manage your resources (read: items and magic points) and map the dungeon yourself, there were dungeons in the original Final Fantasy that I mapped myself using a pad of graph paper. 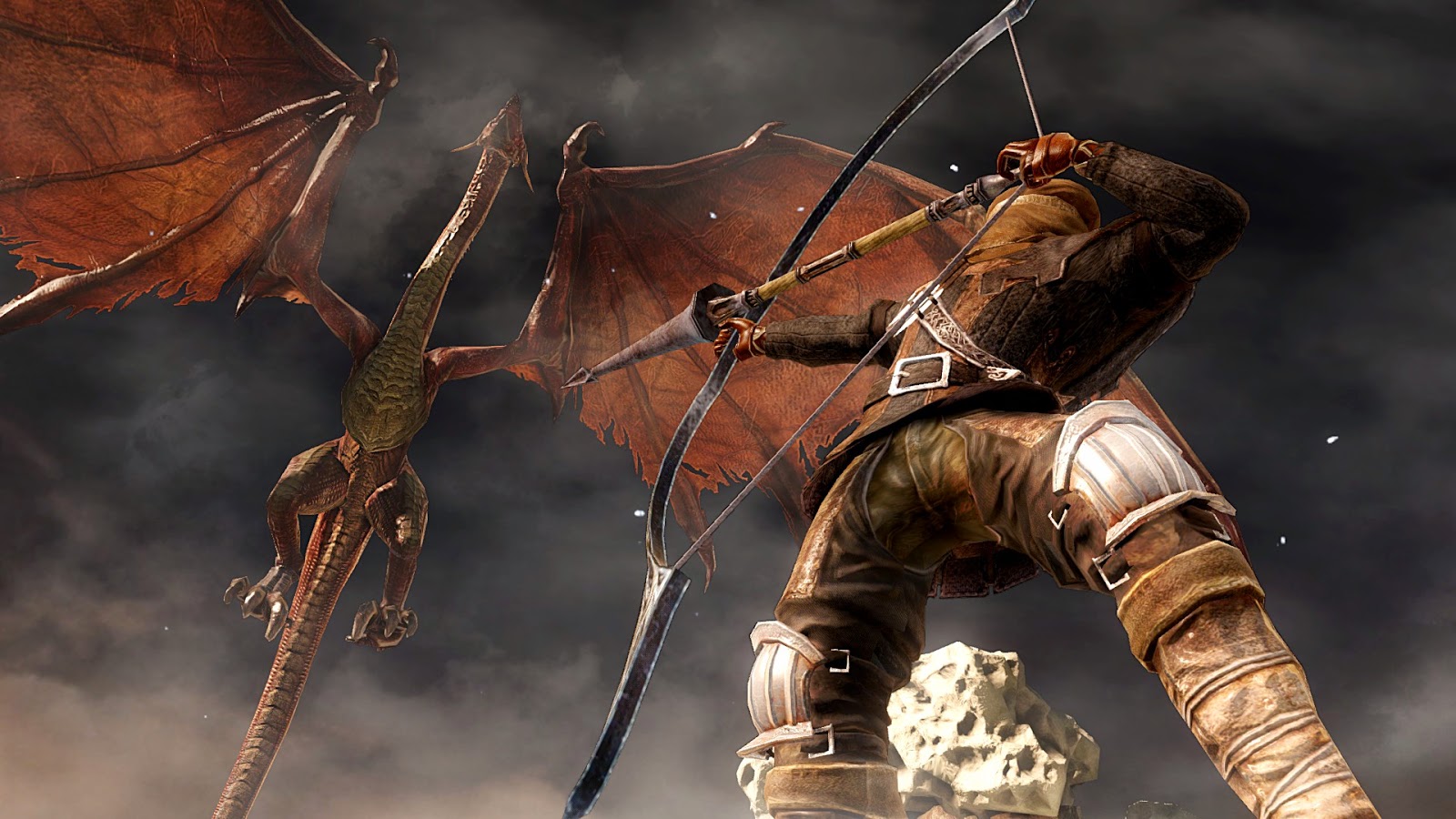 Those role-playing games were a lesson in trial and error as well as logistics, punishing you for not properly preparing for the journey ahead. When Demons Souls was released for the Playstation 3 the gaming world was thrown into disarray as it was a punishing journey that would reward you with a giant banner reading “You Died,” dozens of time but the agony was worth it as Demons Souls was a rewarding game. As John Hardin, manager at the PR agency for From Software, confirms that there will be no Demons Souls 2, players will need to look to Dark Souls and Dark Souls 2 to get their punishing gameplay fix.

Fortunately Dark Souls was a spectacular title that received numerous awards and was slated to receive a sequel for the Xbox 360 and the PlayStation 3 on March 11, 2014 and released on April 24, 2014 via Steam. Dark Souls 2, while set in the same world as its predecessor, is not directly connected to Dark Souls one. Starring as “the Undead” you will choose  one of eight starting classes to collect enough souls to meet with the king of Drangelic, the city-state with which Dark Souls 2 is centered on.

Before I dig too deep into the graphics of Dark Souls 2 I would like to take a moment to speak about Dark Souls: Prepare to Die Edition and the struggles that it saw when it was ported to the PC. When Dark Souls: Prepare to Die Edition was released on August 24, 2012 it did so to a large number of technical issues. As it was tied to the dead “Games for Windows Live” service and was plagued by poor performance, crummy graphics, audio woes, and a number of game-breaking bugs left the PC gaming community struggling to fix the issues themselves. Fortunately a number of dedicated modders took it upon themselves to address the growing concerns and released a number of unofficial patches that allowed the game to play beautifully on the PC. 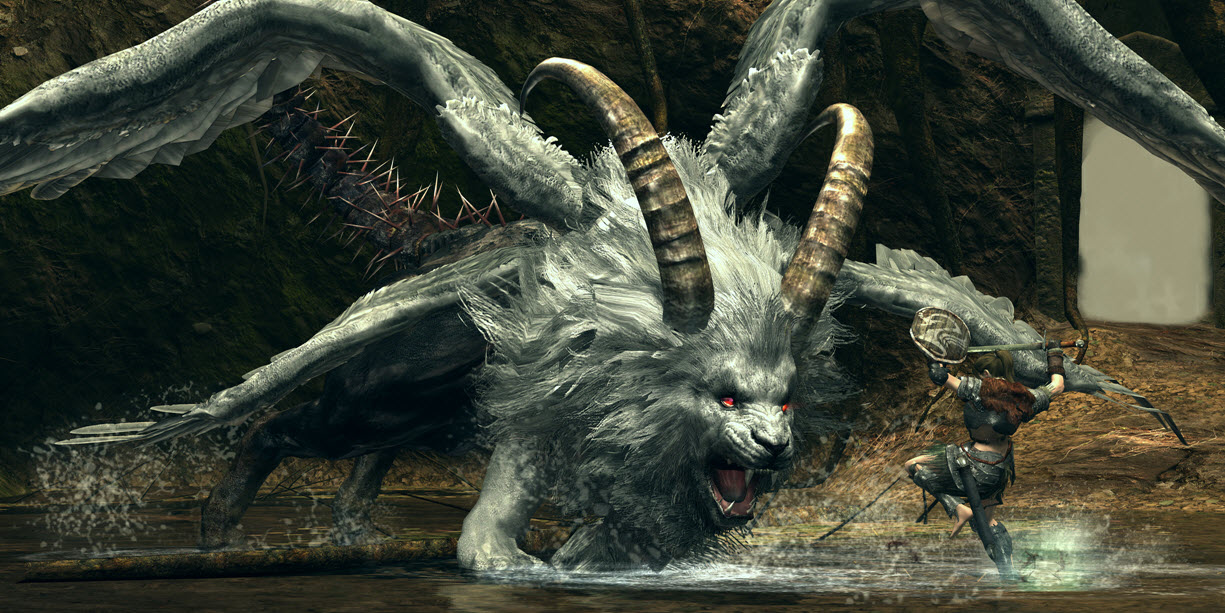 The screen shot above shows what Dark Souls: Prepare to Die Edition was eventually capable of so From Software had quite the challenge to provide PC gamers with a high quality production of Dark Souls 2 right out of the gate. There was much trepidation and a reserved attitude surrounding the launch of the PC version of Dark Souls 2 and with good cause, as there were numerous issues on launch. Where From Software had languished and moved slowly to address the issues plaguing the first game, they were on the ball with Dark Souls 2, releasing patches to address connectivity issues as well as general crashing. Much to the PC gaming community’s relief, most of the issues were ironed out in the first few weeks and From Software’s gripping, and gritty sequel, Dark Souls 2 was well-received by the gaming community. Enough back story, so let us get on with the meat of the review

Shown above is an excellent screenshot of Dark Souls: Prepare to Die Edition with a number of player-made mods to help improve textures and other graphical issue; below you will find a screenshot of the ‘vanilla’ PC release of Dark Souls 2 with no graphical mods. As you can see, graphically Dark Souls 2 is an attractive title with a wide range of colors yet still forcing a sense of depravity and oppression onto the player; the visual atmosphere has been designed to bring you down and beat you. From experience, the feeling of accomplishment when you make it through a particularly difficult run and you find that bonfire is nearly overwhelming. One of the most impressive and gripping views is just out of the opening area while you are on your way to Majula; as you wind your way through a dark, close cavern, just around a corner you see a dusty glimmer of light and as you continue to wend your way toward it the view opens to show a stunning vista. As you stand at the cavern’s entrance and look out over the cliff, your eyes fall upon the gorgeously rendered ocean that leads off towards an evening sun; rock formations and small islands are hazy in the distance and you can see the worn path leading away towards the dilapidated and nearly destroyed town of Majula, with its soaring monument off of the high cliff point. 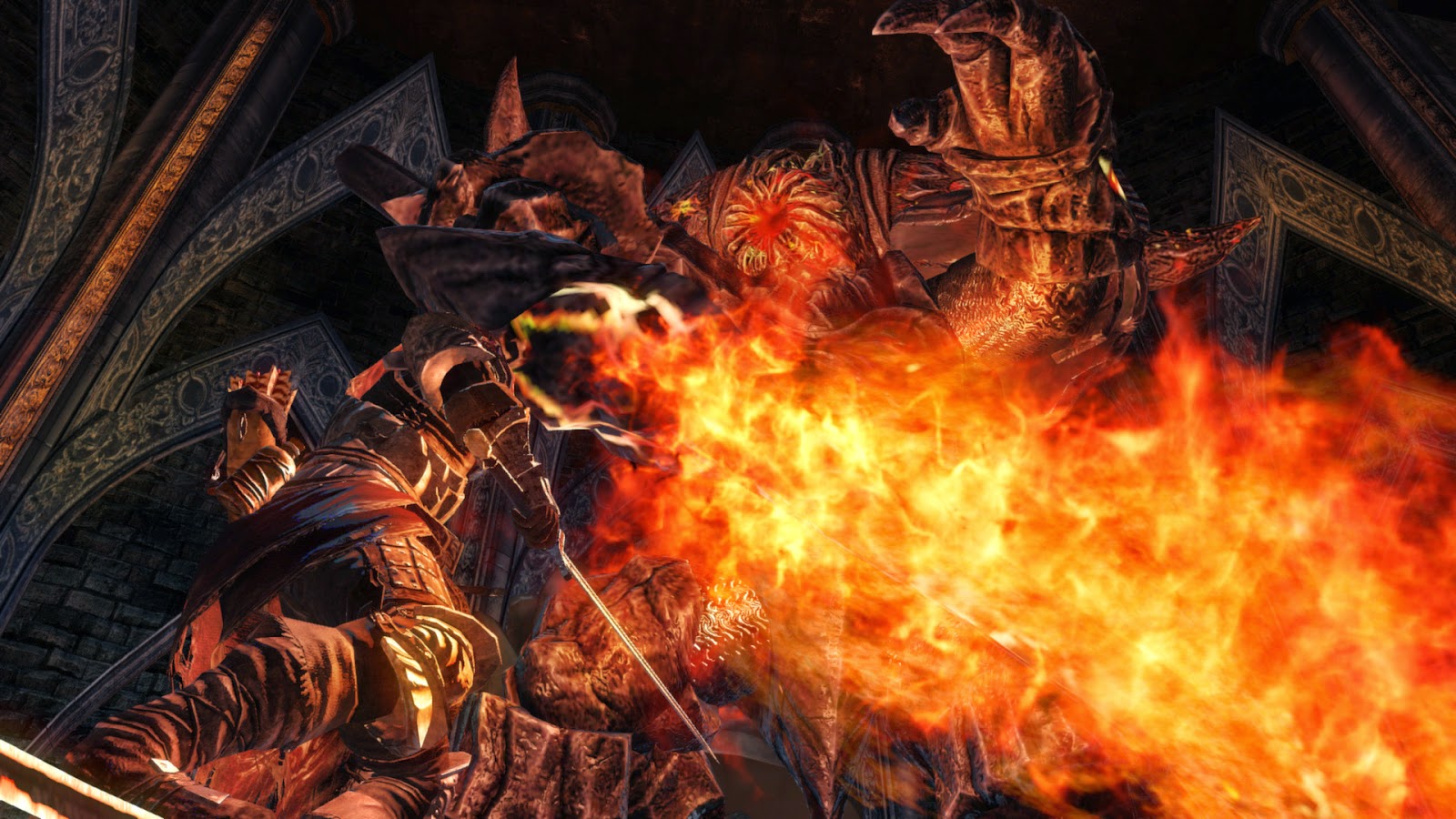 I could not help be stand there and marvel at the stunning view before me; I have seen some good looking games, Crysis 3 coming to mind immediately but compared to the view I was enjoying, Crysis 3 might as well of had art that had been made with MS Paint. I did see a fair number of items clipping into other features of the landscape and there were a number times when my knight’s legs were sunken into the ground nearly half-way up my calves, luckily it was only for a few steps at a time and would cover only a very small section of land. I do want to point out two things that I had to rejoice about (seriously, I jumped up and fist pumped because I was so impressed). The first is regarding footsteps and footfalls as one of my biggest pet peeves in any video game is to hear a footfall before / after the foot animation lands and it is even more bothersome when characters’ feet slide along the ground (as if the avatar is moving faster than the animation is set to move; see Team Fortress 2 for an example).

The footsteps and footfalls land squarely and firmly every single time, even when your legs are buried into the ground up to the knee, the footfalls are solid. That excites me. The second point that I would like to draw attention to would be the way your character climbs ladders. Normally climbing ladders finds a character going through the motions of climbing a ladder only to not actually be grabbing and stepping on the ladder rungs. This is, for some odd reason, incredibly distracting and irritating (looking at you, Dragons Dogma: Dark Arisen that I love so much) and Dark Souls 2 amazingly animated the ladder climbing to appropriately step upon the rungs. I squawked with glee when I climbed my first ladder a few moments into the game; you cannot believe how often the little things like footsteps and climbing a ladder can pull a gamer out of the world they are playing as they see that it is “just a game.” I do not know about you, but when I play a time-sink such as a role-playing game, I am doing so to live a fantastical life, not to just “play a game.” The little things matter and Dark Souls 2 has given them their just due and has a superbly animated world. 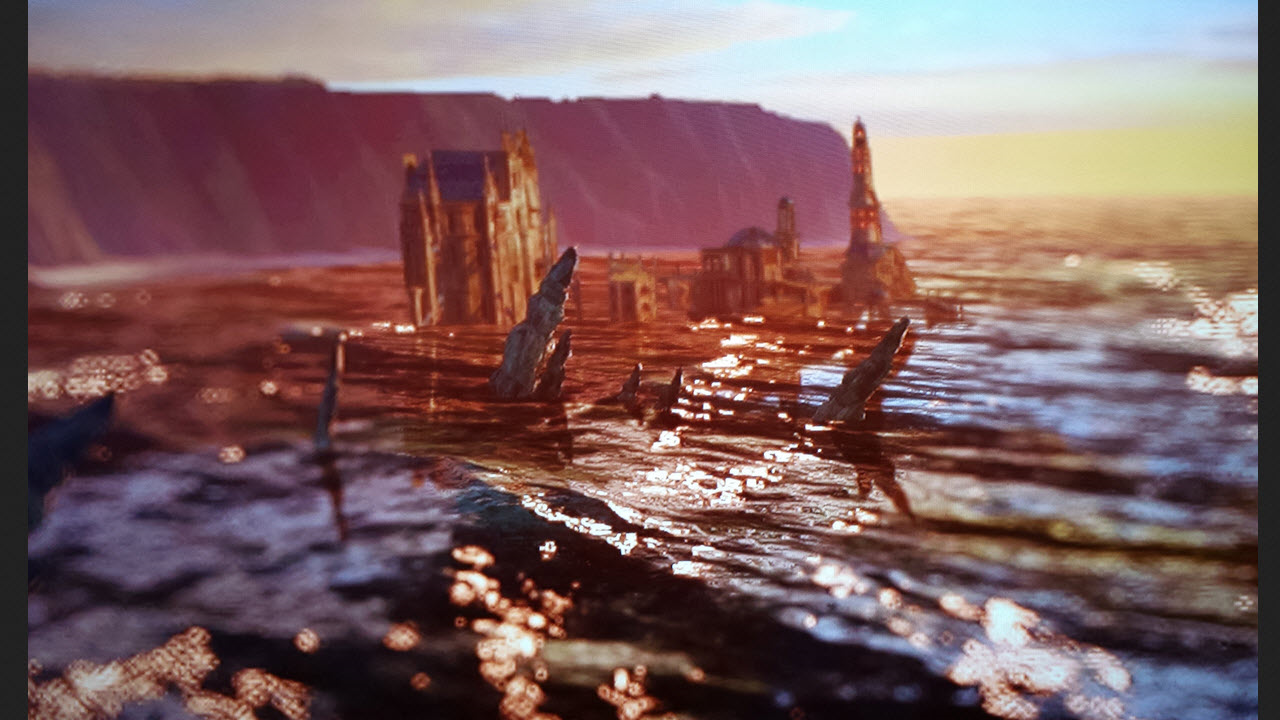 Those of you who have read my articles in the past are likely sick and tired of me going on these wild and crazy tangents about how audio is the end-all-be-all of a gaming experience (it is!) so I will simply give it to you straight; Dark Souls 2 has some of the best audio I have heard outside of a Final Fantasy title. The music is moody and dark laying a blanket of gloom and despair over you that is compounded by the eerie sound effects and the perfectly dismal graphical elements. As you trudge ever onward through the basements and crypts of whatever run-down keep you had the unfortunate luck to wander into, the eerie echoes of your footfalls and the distant moans and growls of the denizens of the dark travel along the dank, musty hallways; each scrape is the herald of a Hollow Soldier dragging their axe along the ground as the stumble towards you with naught but your destruction on its mind.

The sound effects in Dark Souls 2 are incredibly proficient at setting the mood and on more than one occasion I found myself jumping when some nasty beast comes bursting from the shadows howling as it tries to eat my face. I would go so far as to say that the sound engineers for Dark Souls 2 should give lessons to Hollywood as the audio is so good that I can not help but wish for more punishment just so I can feel that same rush that the audio helps to create. As you travel about and explore more areas the audio never gets old as it is rich, free of pops, hisses, and static, and sounds utterly amazing on my Siberia Elite headset. This may be the best sounding game that I have heard in recent memory, if not all time, as it is simply fantastic. 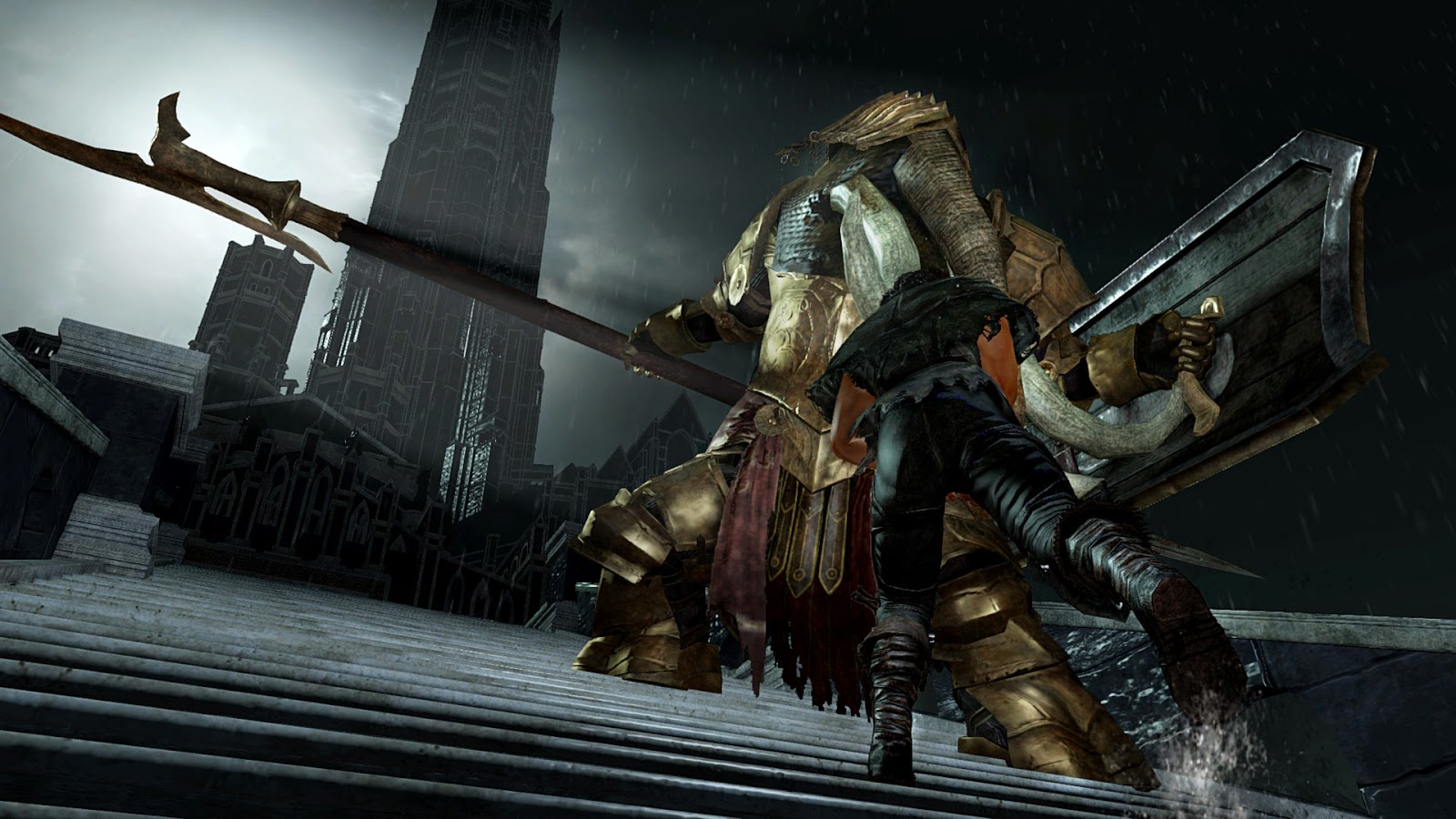 Outside a handful of initial launch woes, Dark Souls 2 not only upholds the tradition of oppressively difficult, yet extraordinarily rewarding gameplay that was first coined by Demons Souls and later Dark Souls, it completely surpasses them in terms of quality, capability, scope, and vision. Even those gamers who have gotten so used to games holding your hands, Dark Souls 2 is such a liberating experience as you wander the dark halls and open ruins that dot the landscape. Extremely challenging and equally engaging third-person combat will leave you with a sense of awe and pride as you fell a particularly difficult foe, or on the flip side you will look on in despair as you are pounded into oblivion by a maul wielded by a grotesque amalgamation of flesh and corruption.

Seldom have I ever had so many unique and exciting experiences in a role-playing game and I would go as far as saying that Dark Souls 2 is either the best, or second best role-playing game of 2014 (waiting on you, Dragon Age: Inquisition) that I have played. Well put together, beautifully animated, and stunningly brought together by some of the best audio I have ever heard in a video game, Dark Souls 2 is a must-by title for any PC gamer.