In a world saturated by MOBAs, one sets out to do what none of the others have… and it does quite well actually! Deadbreed takes a few different directions on the MOBA front. Not only are some of these quite interesting, but others are rather fun or terrifying to go up against. Now I’ll start off by apologizing to some of those that I played with as I am not that good when it comes to playing these. I just cannot compare to my brother who plays countless hours of DOTA 2 and League of Legends / Heroes of Newerth before it. I’m still trying to learn as I get the concepts, but the executions – well, I’m not quite there yet! 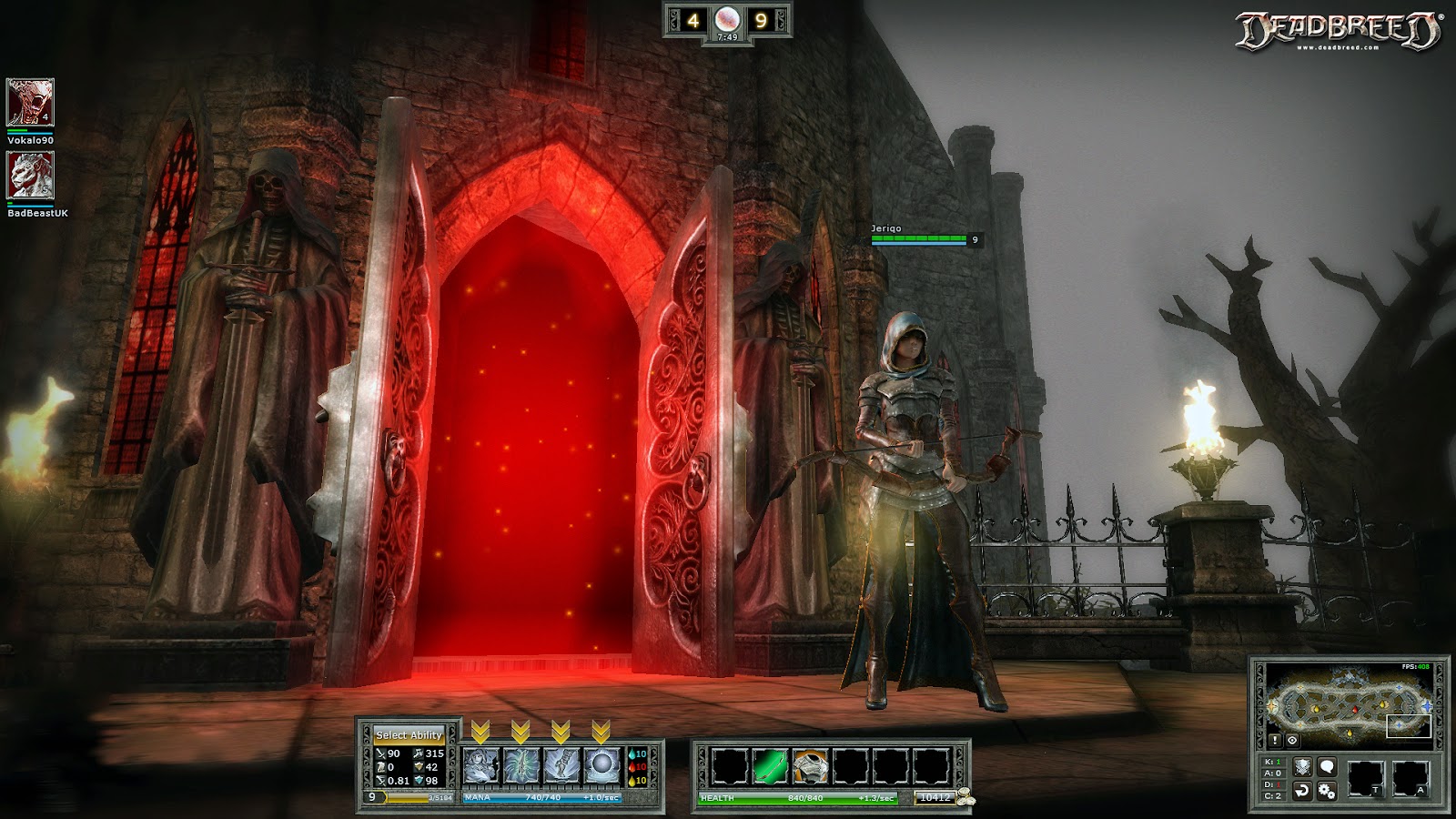 Starting off, Deadbreed allows the selection of various different races that each have their own appearance and skills that can be used in combat. Each race plays differently from one another and it takes a bit of time and effort to find out which one suits your play style. More races can be added by either performing well enough over the course of matches for the in game currency, or by using real money to speed up the process. While some might consider this a pay to win, this is not quite the case as the only thing that separates these two methods of gain is an investment in time.

Where Deadbreed becomes most interesting is that it allows for the leveling up of breeds outside of combat. These stat boosts allow for the modification of a race’s base stats, making them that much more potent in combat. Once a match starts, then the standard level progression commences. Gaining experience can be done by killing either the other teams minions (sounds better than creeps) or their heroes. Each level-up within a match goes back to the standard formula of stat increases and skill points for one of four skills.

Deadbreed makes buying items a tad different. Not only can you do the standard buying of items back at the home base, but a player may also buy items within the first thirty-five seconds before the match starts. This is a different counter and more of the selection screen than the one minute before the enemies minions spawn. Once a breed is chosen, there are generally about thirty seconds left to do the shopping. This means that instead of having to go through the lists for what you want as starting equipment, you can instead hit the ground running. This is extremely useful if there is anything that immediately spawns that your character can use or you would rather pick up so that the other team cannot. 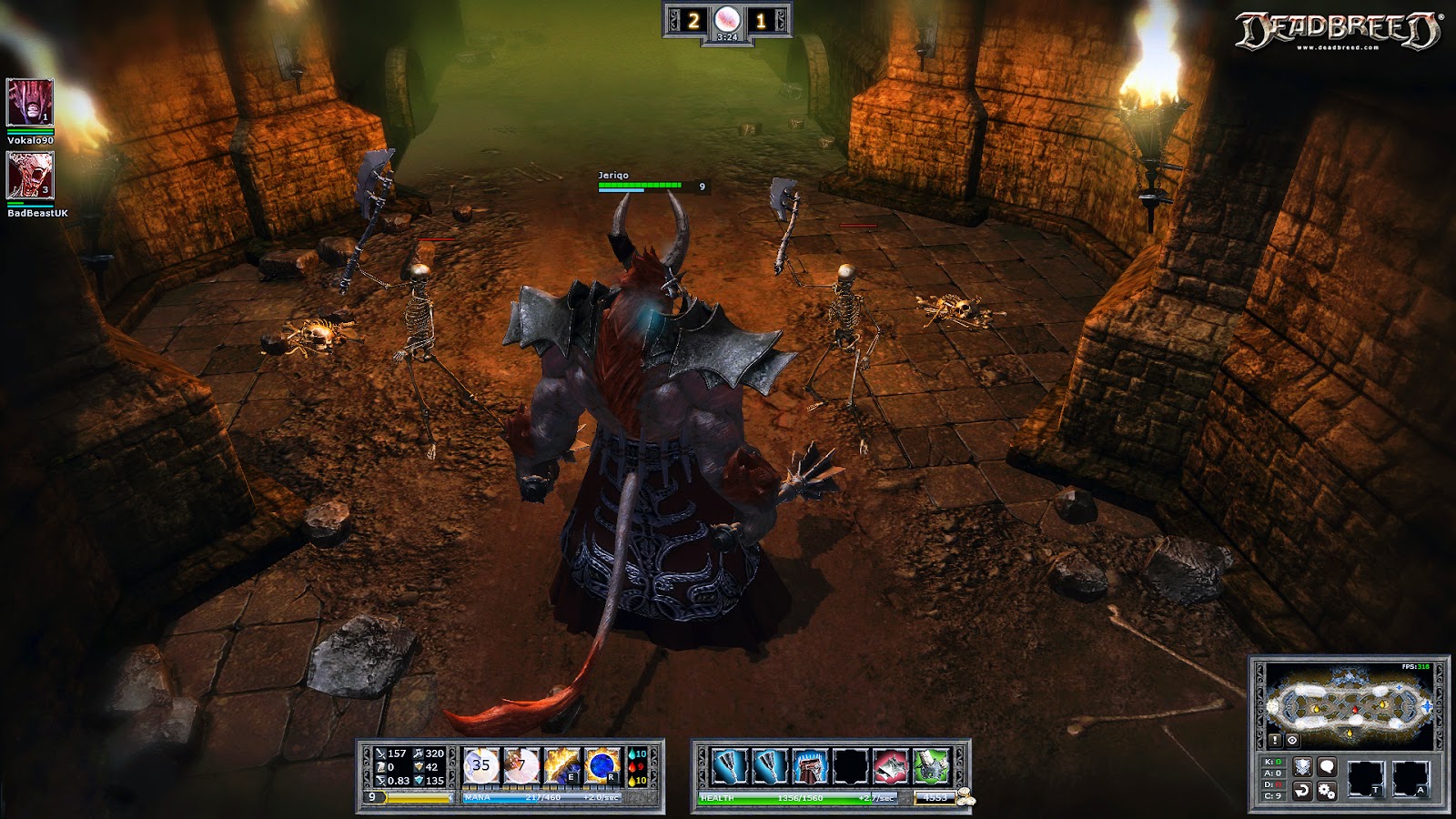 A prime example of this would be that one of the races has an ability that boosts their Strength, Health, and Attack Speed with one of their starting skills, but it requires one of the three pickups which spawns once every two minutes. These items that can be picked up are Blood, Nectar, and Spirit.

– Blood is spawned by a tree and can be used for either special abilities or for summoning such as a giant troll that marches straight for the opposing forces home base.

– Nectar can be acquired by plants scattered around. These will make the troll ignore you as long as you aren’t standing right under his feet.

– Spirit increases the potency of skills such as Lifeleaching in which you regain 5% per hit + 0.5% per Spirit held. These are acquired by killing more powerful minions and heroes.

Where I’m not quite sure of in regards to items and how many can be carried in a general MOBA, Deadbreed allows for seven different items. Available to all players are the choice of the right and left hand allowing either two-handed weapons or various combinations of one-handed ones such as sword and shield or dual-wielding. With this characters may also equip items on their Head, Torso, Shoulders, Back, and carry a special and powerful sounding item called a Totem if it has been unlocked. At the time of this, I have sadly yet to unlock the totem. 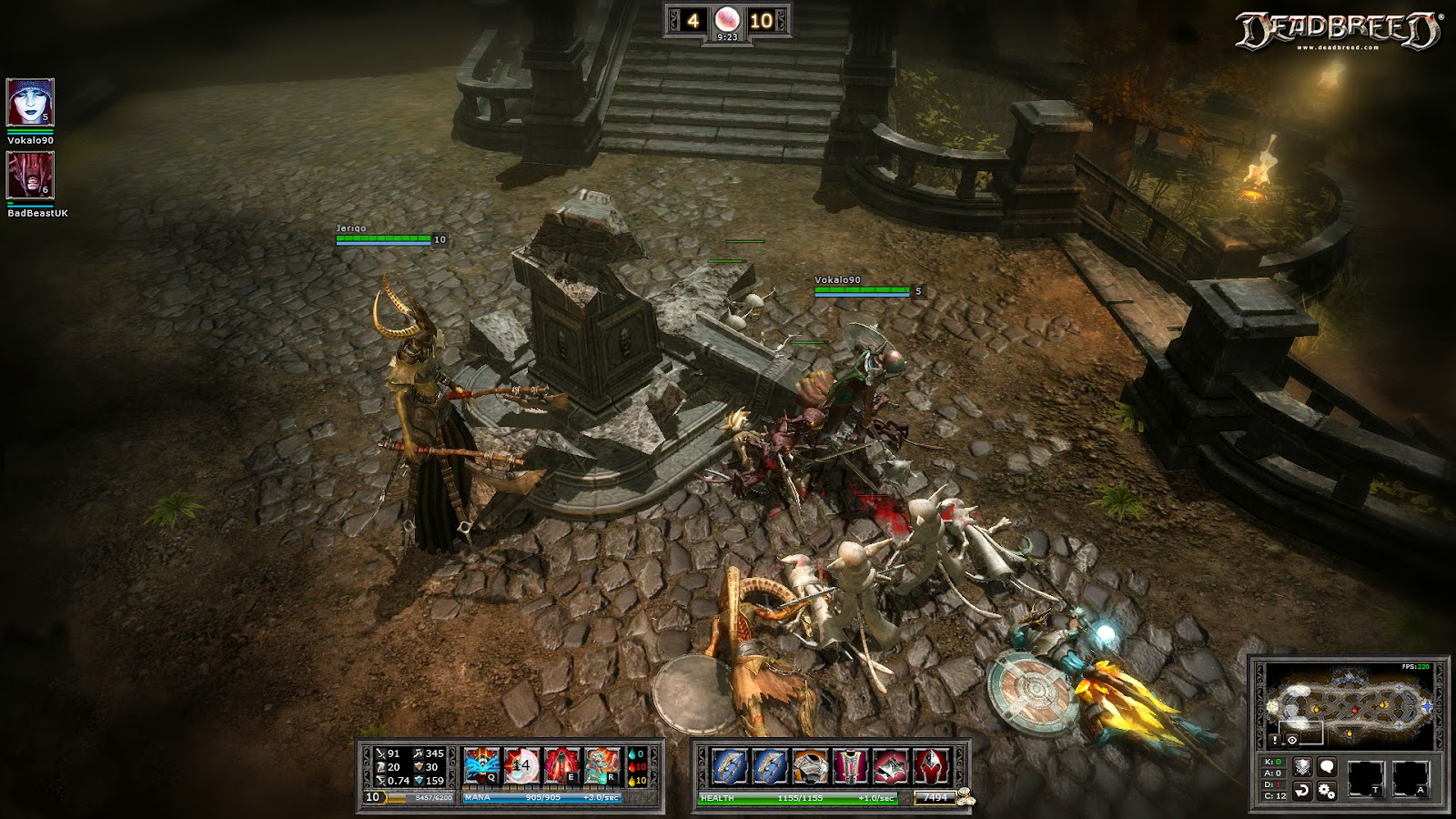 Along with buying the various pieces of equipment there are Artifacts that can be unlocked which follow the same principles as unlocking the other breeds. These are much more powerful items that can be used as long as they are unlocked then bought within a match once you have enough money. While these are more expensive and powerful than the other items, what sets these apart is that it is possible to insert one of the pickup items as mentioned earlier thus creating an Orb. Orbs gains experience at the matches end and as they level up they increase the potency of the artifacts that they are imbued in. This could mean that two different characters using the same artifact, could have different stat boosts depending on which pickup was used as an Orb.

Interesting enough, below the main map are dungeons which can be entered. Only players can enter these as the minions move right on by. Within these dungeons more powerful creatures protect chests that are definitely an added bonus if they can be opened. It can also make for a good hiding place as long as you can get the guardians and whoever chases you in there to fight with one another as you continue running away (errr, strategically retreating).

The last feature that Deadbreed has is that players can vote upon the opposing team’s “Final Boss”. This is a large and powerful creature that hides behind the towers and a door called a Crux. Once the Crux has been opened, players and minions alike can enter to take on this boss to win the game. Thankfully this is not a JRPG boss with three forms, but it does have three separate health bars making it a challenge without a good amount of levels and portions of proper gear. 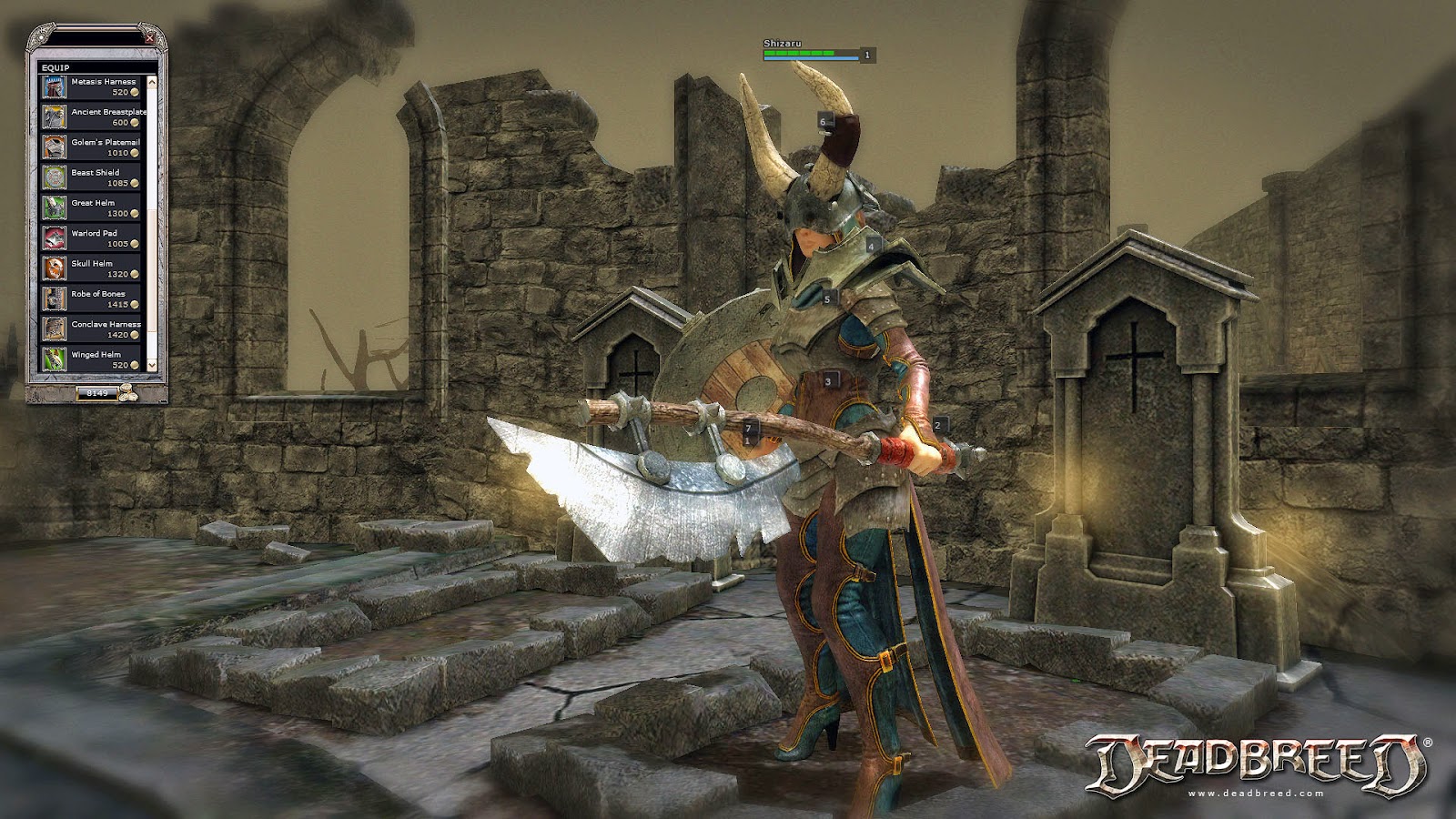 Overall Deadbreed feels like a solidly built game but there were a few little things that would be good to see changed. Buying items should perhaps be more of a grid instead of a list that can only be scrolled by selecting the scrollbar as the mouse-wheel did not work. If it stays a list, maybe have more than one column. Being able to buy items within the home base in general instead of just at your actual tombstone would also be a more convenient option. This may sound a bit lazy, but sometimes time is quite short and every second counts. The last thing is unfortunately that not much that can be done for, but as of this writing it was really hard to find a match. There were some nights where the lobby was empty other than for me. Thankfully there is a practice mode and it allows you to accumulate experience for both leveling up a breed or an artifact. It should be noted that this is not a substitution for real combat as these bots are not designed to make crazy moves as others players will sometimes do.

Deadbreed is a lot of fun so far, especially for someone who doesn’t play these style of games often. The developers have really done a great job especially that with all of its various elements, this doesn’t feel like just another MOBA. Hopefully more people join up which would make it easier to get more games running instead of the crazy long wait times that can sometimes occur while hoping that someone else comes along.