I have mentioned many times in the past that I am a huge fan of anything space-y; when you throw in some extremely tense and incredibly deep 4X strategy elements and I am in video gaming heaven. Distant Worlds: Universe is a giant collection of all of the Distant Worlds games, including Distant Worlds, Distant Worlds: Legends, Distant Worlds: Return of the Shakturi, Distant Worlds: Shadows, and it also includes an updated user manual (which is a godsend since you will spend plenty of time in the manual) as well as a near complete overhaul for modding support (modding is much easier now). Given that this is a complete Distant Worlds package, having the tweaks and updates to all of the prior releases in one, what you’re getting is the full experience for the price of a single game. 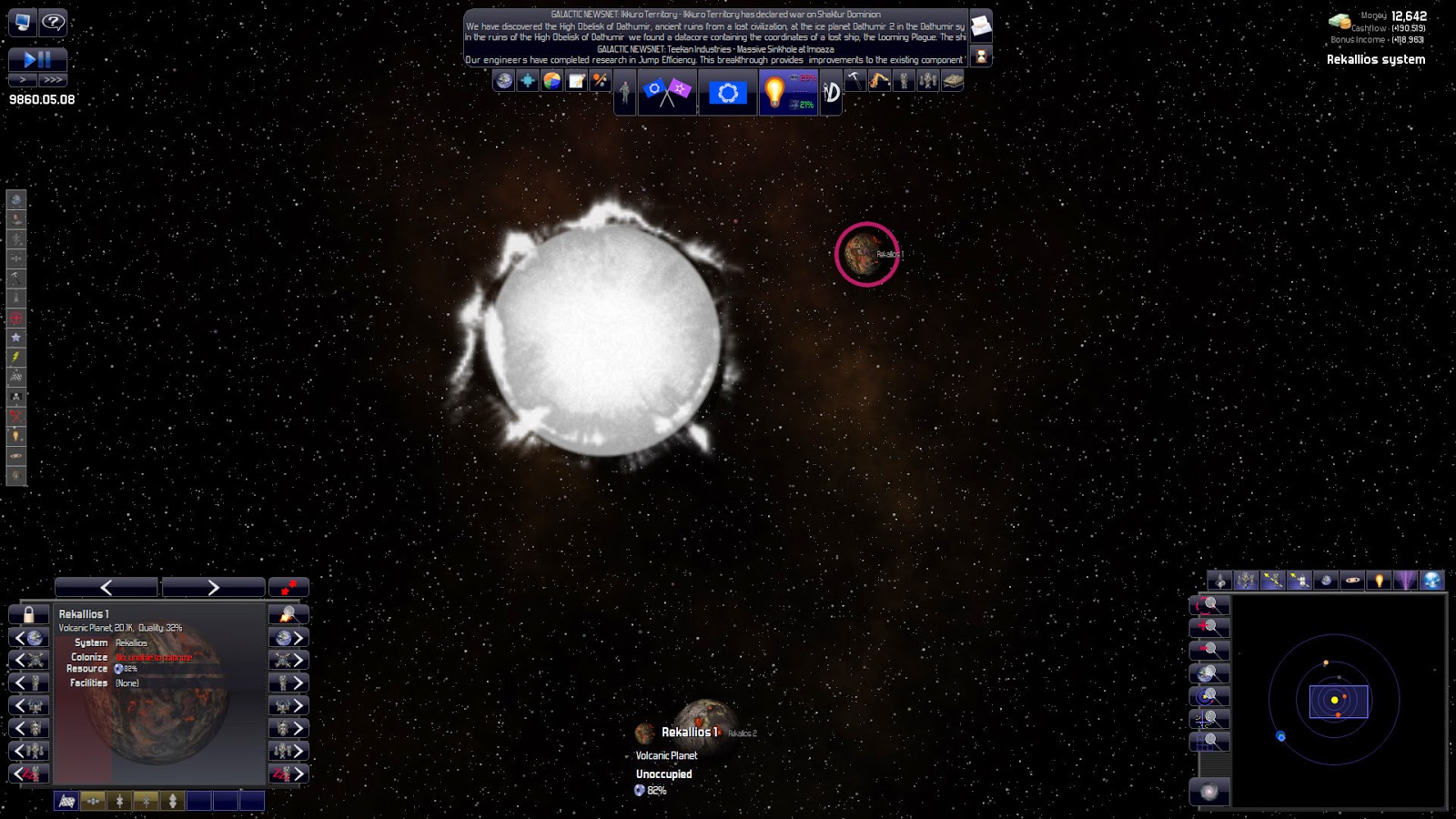 First, Distant Worlds: Universe is massive. Utterly huge. It is a delicious experience, but the sheer amount of information and choice is enough to go through and drive some new players to the brink of exhaustion. Working through the learning curve though and what do you have? A beautiful masterpiece of managing your galactic civilizations, from space exploration and research, to politicking, to combat; every single aspect of growing your space faring race is covered.

Throughout the entirety of my time with Distant Worlds, I had the user manual open nearly 100% of the time, and I consider myself a regular 4X fan (Distant Worlds, Endless Space, Civilization 5 for recent releases, Alpha Centauri, Galactic Civilizations 1 & 2 and Masters of Orion to name a few classic releases). The learning curve even for a veteran such as myself, can be steep; very steep. Fortunately the reworked user manual is an extremely well made and though-out tool, and there are forums full of extremely helpful 4X strategy gamers that will help you through your various issues.

Generally speaking, 4X games have a fairly generic graphics as the focus of a 4X game is more on the politicking and strategic maneuvering of research, resources, and military might. Distant Worlds: Universe has not only a fantastic user interface, but the art for each of the different races is unique, fresh, and every detailed. Ships of the different races are instantly recognizable and detailed well enough given the 2D art-style of the units, though the one bit that really stuck out like a sore thumb to me was the planets; some of them looked great, detailed, and clearly depicted no matter the zoom level. 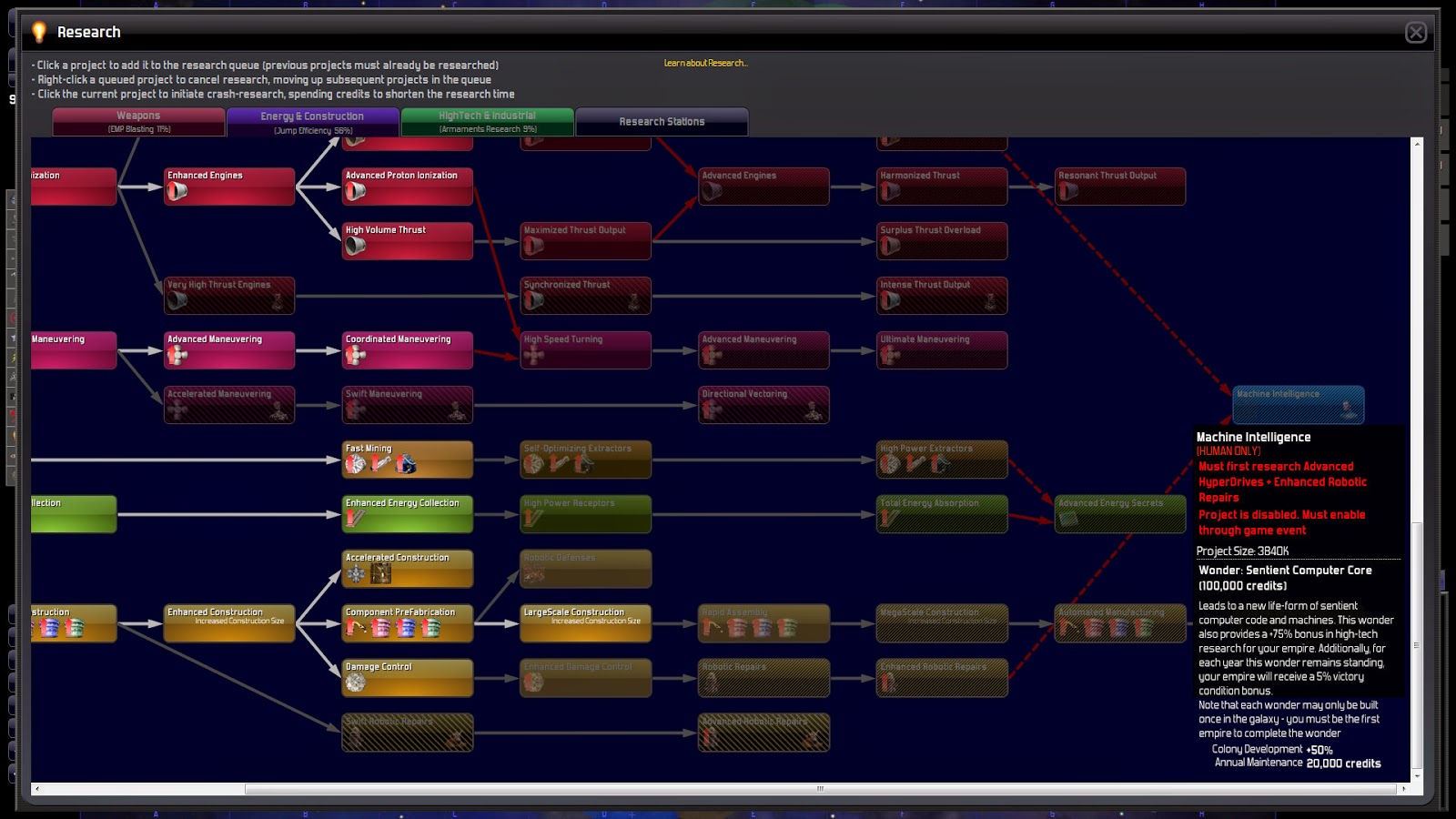 Others, though, were blotchy and so poorly displayed on screen that at first I thought it was having issues loading the textures but after a few restarts and closing of background applications, they simply wouldn’t load. Even though a handful of planets, out of dozens of planets, did not seem to load properly, Distant Worlds: Universe stays true to high science fiction and delivers a very pleasing visual experience.

Given the nature of 4X strategy games and how a gamer can be mired in a single move for what feels like hours, the aural experience has to be top notch. Sound effects certainly are important for the overall experience to work, but it is the ambient audio and the background music that either really brings the whole game together or really breaks the feeling of immersion. I am still a mixed bag when it comes to the overall audio in Distant Worlds: Universe.

One thing that I can certainly say is that the soundtrack is phenomenal; rising scores and quiet corporate lobby-style lounge tunes each feeling slightly different based on your race are all excellently composed and I never once got sick of the BGM. Instead, where I am hung up the most, is with the ambient audio and sound effects; one day I find them passable and I pay no attention to them, the next I am irritated by the flat whirring and beeping, or the low, tinny sound to the thrusters. Something just did not sit well with me and if I can find out what it is, I will certainly update this review, as the in few dozen hours I have into it so far, I cannot figure it out. 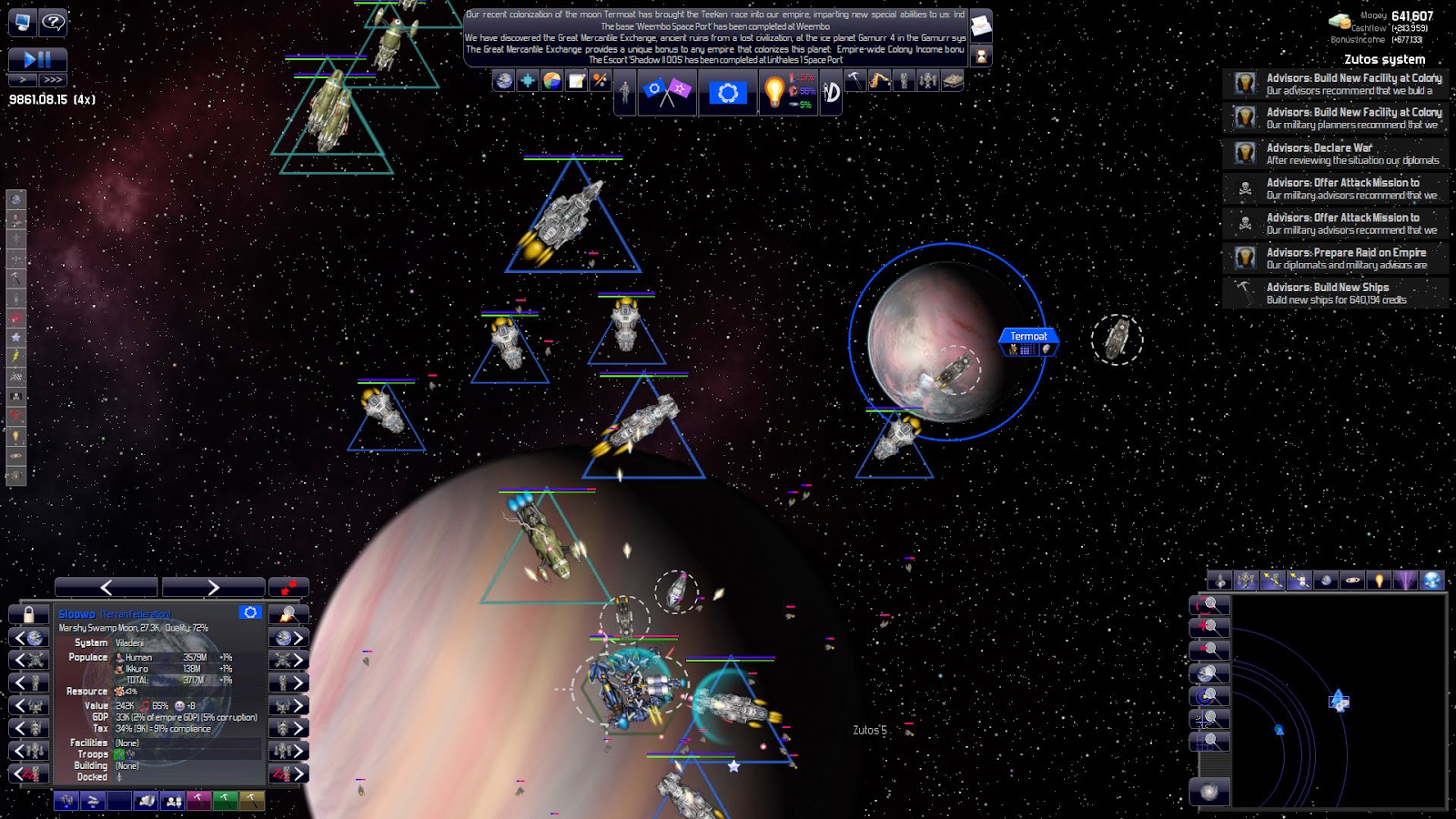 I have brought it up a few times in the review but I will reiterate; Distant Worlds: Universe is a massive undertaking. The level of detail and the wealth of information that is in this game is mind-staggering. Fortunately this metric-ton of data is so rich and full of interesting (and highly useful) facts that no two playthroughs are quite the same. Whether you start off at the original Distant Worlds game (called the Classic Era in game) or you start at the chronological beginning ( called the Ancient Era ), each game feels different, with each race potentially reacting differently to a particular action.

Sheer volume is a part of why the replay value is so high, but more importantly it is because the game is just so darn satisfying, whether you win or lose. There were a handful of games where I had hours into a session and I made a wrong move and it was all for naught, lost the map, or made a massive political or military blunder, whatever, but it never once felt like wasted time. Even when you lose the experience of simply playing the game is rewarding enough, and if you are as obsessive as I am, you will backtrack your steps to determine where it is that you went wrong, and you will address it. 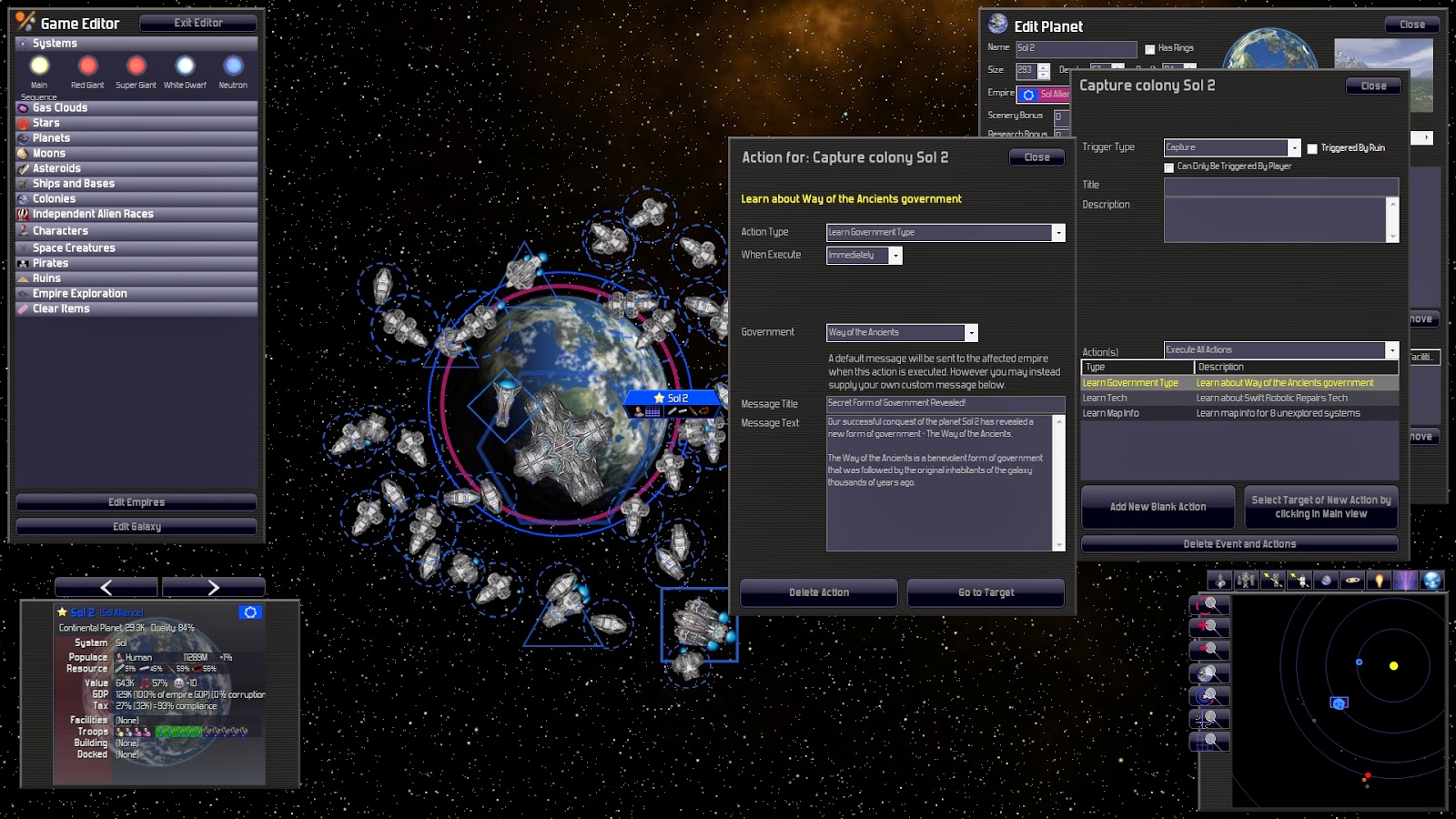 When I was asked if I would like to review Distant Worlds: Universe my jaw literally hit my keyboard, after all Distant Worlds has been a prolific space-faring science fiction 4X strategy game for the last 4 or so years and I am a bit of a space-y / 4X / high science fiction fanboy so I jumped at the chance. A week later and I have spent at least 2 solid days playing through scenarios, saving a game, making a decision then reloading the game twenty minutes later because it was a mistake, and I have enjoyed it so very much.

The repackaging into a single game, with an updated user manual (thank you!) and modding support, is a perfect move to keep the eyes of the 4X science fiction gamers focused on CodeForce and not on a certain title by Stardock (looking at you, GalCiv III). Outside of a certain … something with the sound effects and audio, the combination of all of the Distant Worlds games thrown into a single cohesive unit is a brilliant adventure and learning experience.In all honesty it was the absolute perfect move and the resulting package has thoroughly put competitors out of my mind as I am continually going over risk vs. reward based on how I would address a potential ally or threat. Well played, Code Force, well played…