Growing up in Canada the anime scene wasn’t quite what it is today. My first anime experience was either Gundam Wing or Dragon Ball. From there I continued to find other animes that I increasingly preferred over regular North American programming. Don’t worry, this is going somewhere. As the years went on more and more Gundams either came over or were imported. Then I found Dynasty Warriors Gundam and was confused; who were all of these people that I had never heard of? From there I started at Gundam and then worked my way up through Zeta Gundam and Gundam ZZ just to understand the various characters that were within these story modes and side missions. Dynasty Warriors Gundam Reborn goes back to the roots of the Gundam version of the long-running Dynasty Warriors series. Back once again is the Official Mode, which contains the stories of the Universal Century. The game plays out the events of the original Mobile Suit Gundam, it’s sequel Zeta Gundam, Gundam ZZ’s sequel Char’s Counterattack, and the recently finished (June 6th, 2014) Gundam Unicorn. For the first time stepping outside of the Universal Century in a story mode, is the telling of the Cosmic Era events of Gundam SEED and its sequel Gundam SEED Destiny. What makes this mode unique compared to the Ultimate Mode is that, not only are these the retelling of events in the format of Dynasty Warriors, but they contain screen captures of the various animes as well as fully rendered CG cutscenes and voiced cutscenes.

New to the series (there are a lot of these!) is a forced switching of characters within portions of certain levels, changing the scope of the mission from elimination of the enemy to surviving the enemy onslaught. These events really show the difference between the power of a Gundam piloted by an ACE pilot and a standard Mobile Suit piloted by a mediocre pilot. The difference between these two can be so significant at times that it really gives you an appreciation for piloting one of the Gundams against the horde of enemies.

Accompanying the Official Mode is the Ultimate Mode which acts like the previous Original Mode /Story Mode, which features characters from the many series over time in various scenarios with one another. While Dynasty Warriors Gundam 3 had a very large and impressive Story Mode that blended all the characters in an original story, Reborn takes that concept and trims it down into various smaller scenarios that span 4+ missions. While these are smaller in scope than the previous iterations, each still has it’s own designed story with several missions and character dialogs which, in certain cases, leads to choices in of which mission should be taken next while. Sometimes taking one mission over the other will lock the other choice and leave it unable to be selected until later when the whole scenario is complete. 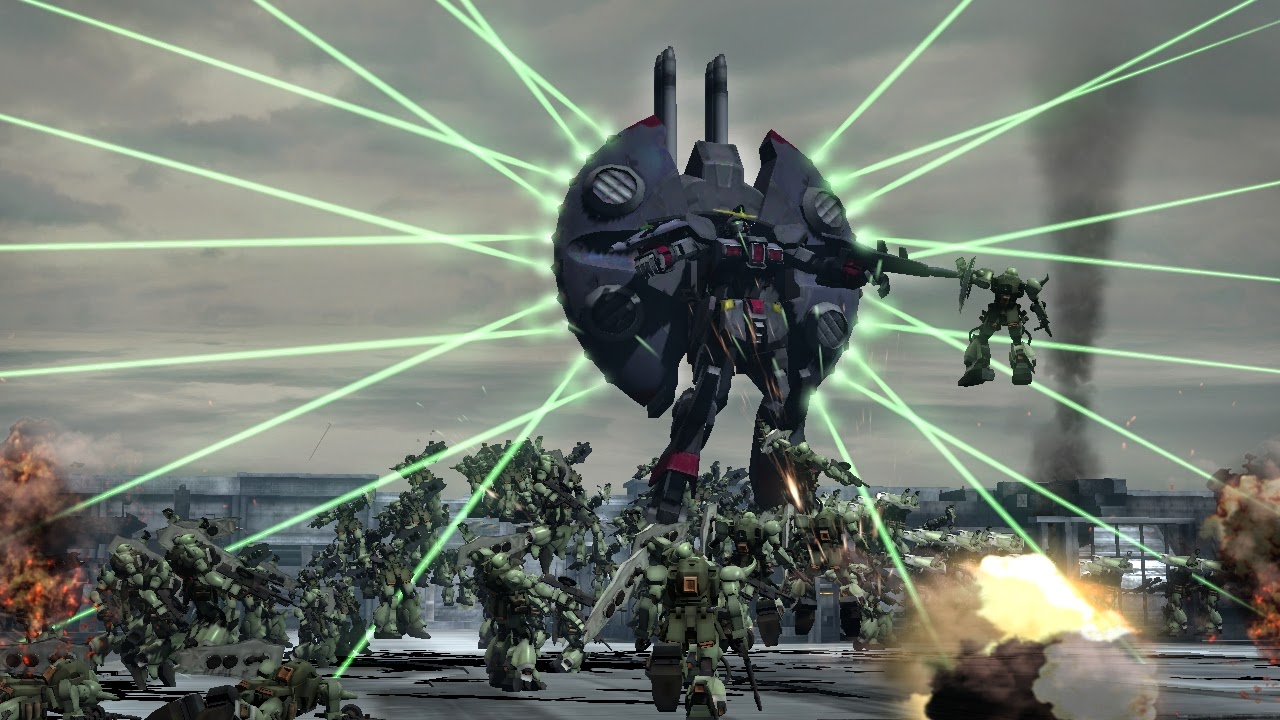 The missions inside of Ultimate Mode not only contain mission objectives, but also have optional goals that are presented in Bronze, Silver, and Gold difficulties. These range from defeat xth amount of enemies, to complete the missions within xth minutes, to using a specific suit to complete the mission. More often than not the missions demanding the use of specific suits for a gold medal are the cheapest of the cheap. These suits are generally found at the beginning of a Gundam anime being destroyed left, right, and center and provide the most amount of challenge for the player. When up against even most mass production suits, yours in these cases does not even compare. These medals, as well as the completion of missions, are used to unlock Mobile Suits, Gundams, new pilots for use and for partnering. Thankfully all these medals come to you in the form of cards with information about how to complete them removing a lot of guess work of how to go about unlocking the specific ones that you wish to have.

Basic combat is standard fare for a Dynasty Warriors entry (moving across large maps and destroying enemies upon enemies and taking over fields), however Reborn changes up some of the features introduced in 3 while adding plenty of new things. For example, new to the Gundam are specialized units that, unlike ACEs, are simply more powerful units leading squads for a variety of specialties from sabotage, bombardment to interception and plain attacking. These units provide interesting new situations especially along side of enemy ACEs (various characters and named mobile suits) as they can give the enemy forces an advantage when conquering your fields. Back again to aid in the destruction of all of these enemy suits are the various pickup items that can be either dropped or found inside of storage containers. These once again vary from granting additional health, to boosting attack / defense / speed for thirty seconds, to finally refilling either the SP or Burst gauge.

Charge Strikes that were used for dealing proper hits on larger Mobile Suits and Armors also make a return but are much more useful than before. Charged Strikes now act as a powerful ranged blast capable of chaining the destruction of several suits in one shot as a sort of lucky one-shot kill. These are especially useful when having just conquered a field, when most defenders are powered down with no defenses. 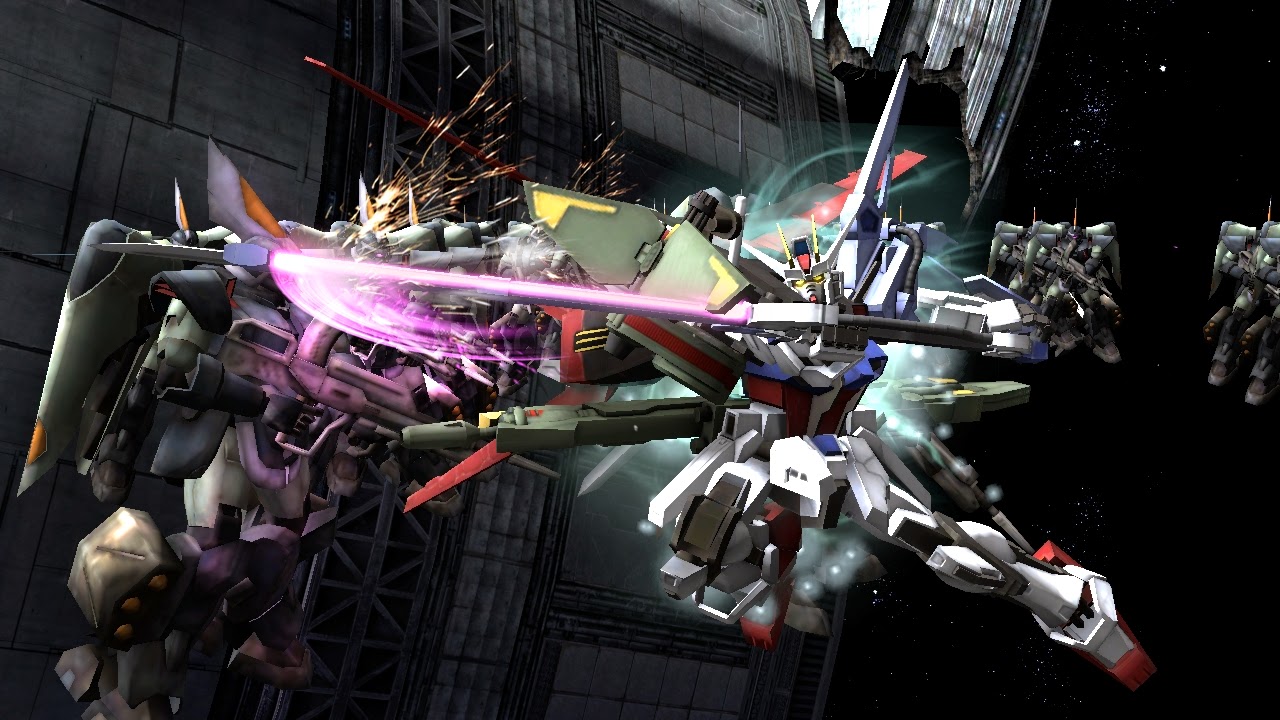 No longer available as an option are Partner Strikes Introduced in the previous version. These are now available through a new option called Burst Mode which enhances all of a Mobile Suits abilities, making them a serious force to be reckoned with. This new meter fills up as enemies are destroyed and as you take damage while moving across the various fields of battle. The layers of possible strategies that this combination can add range from quickly conquering an enemy field to helping quickly take out one or several ACEs. Partner Strikes, while no longer being an option, are however available to use instead of the SP attack while within Burst Mode and the abilities come in two formats. The first is in the form of a Mobile Suits SP Attacks from both you followed by that of your partner. The second form comes as something new to the series and allows ships to launch massive amount of missile strikes or a single warhead to deal damage across a large area.

Thankfully back for the first time in several games are the open fields instead of the tiny little squares that were attached by claustrophobic corridors. Not only does this make the gameplay feel more open, but getting from one point to the next is made much easier. There are still some levels that contain these, but it makes sense in regards to the environment that is being fought in such as a mining asteroid or the tunnels underneath a mountain.

In a game with ever-increasing difficulty, upgrading is a must. Every Mobile Suit that is shot down gains the pilot experience points to level up, team points to learn skills, and the possibility of picking up upgrade parts for mobile suits and Gundams. Every level up raises a pilots melee and range attack at a small rate, but after gaining enough levels it really adds up. The team points are not only granted to the main character but also to the selected partner, allowing the partner to learn skills even when they are not being used as the main pilot. While one might wonder why, there are plenty of times within the Ultimate Mode where certain characters are not available for use and having a pilot with skills even at a lower level is much better than having a pilot with no skills and no levels. While the partner accumulates half of the points gained by the main pilot, four other pilots may be chosen as “favorites” gaining a quarter of these Pilot Points. These four, like the partner, are in a better position to start off for the later eventuality that either your pilot or your partner is not available or a friend joins in for co-op. 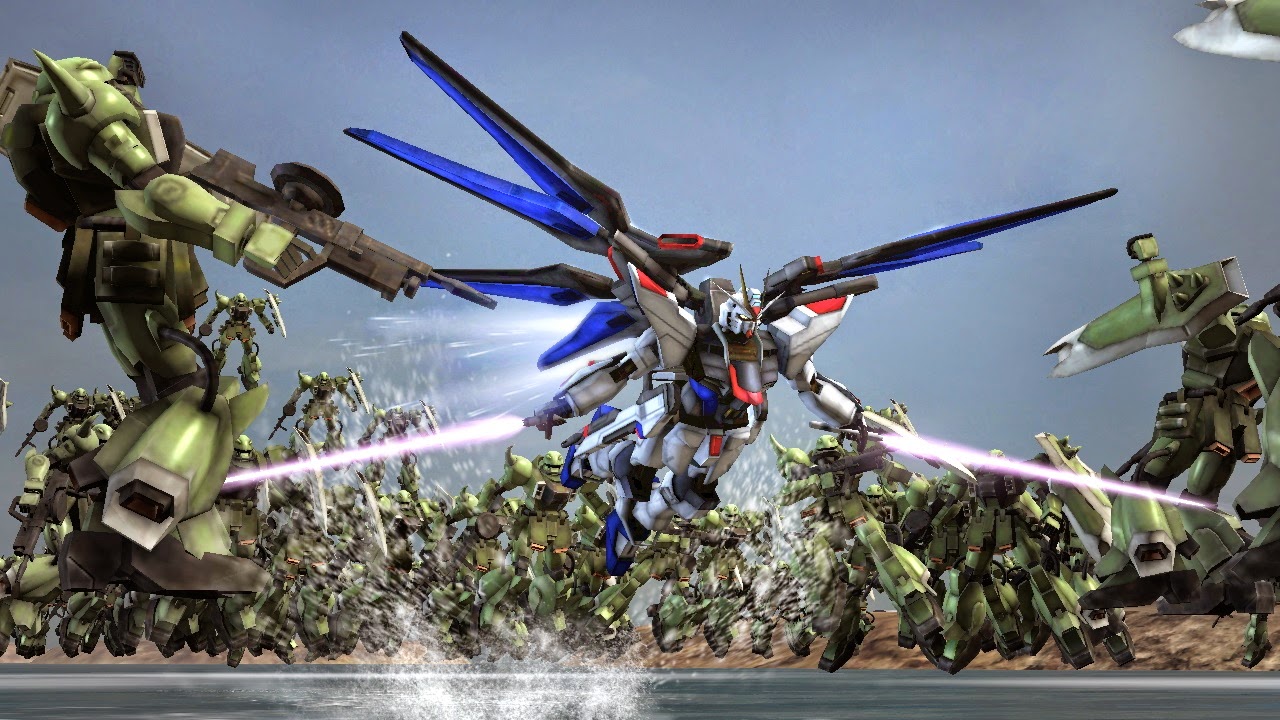 Plans that are acquired from shooting down ACEs and mass amounts of enemy suits are for individual pieces instead of the suits as a whole. This allows a lot more variety as arms, legs, and torso which come in ranks starting at E and ending with S can be merged together in a various set of combinations. These combinations are only for a set amount of times including the addition of “extras” which cost materials collected during missions instead of money. Each extra as well as the merging of parts also take up one of these limited slots per addition. These extras enhance a range of your suits weapons attributes from extra melee attacks, to powering up ranged attacks. Once a suit has been upgraded the max amount of times, or even prior, it can be merged into a better ranked suit part, adding extra values to each of the mobile suits stats. This to itself can be rather beneficial as it consumes only one slot and furthers the overall capabilities.

For the first time in the series, players are able to use the larger Mobile Suits and Armors. If piloting a Gundam versus a standard Mobile Suit gives you any idea of the overwhelming power that it can possess, these larger units make even most Gundams seem like children’s toys in comparison. Unlocking the larger units and their unique missions requires the completion of parts of the Original Mode. While these missions are fun, very fun actually, there is not much challenge to be hard in the standard difficulties as not much is even able to scratch you.

The only issue that Reborn can suffer from when too many suits are destroyed at once leading to lag, similar to it’s cel shaded format in 3. That would be about it. From just about every other standpoint Reborn is an amazingly constructed game.

From a Gundam fan viewpoint, there are a few issues. Having watched just the animes, within the Official Mode some of the stories with the exception of the original Mobile Suit Gundam felt cut short. There are several epic battles that would have made for really fun levels, but are skipped over completely which is especially noticeable by the last two of of which are Gundam SEED and Gundam SEED Destiny. Certain portions just felt rushed and honestly, as much as I love Gundam Unicorn, it wasn’t finished at the time of production and it would have been much nicer to have a full story line of Gundam ZZ as it tends to get shafted compared to the first two series. Either the inclusion of an Official Mode Gundam ZZ or the completed Gundam 00 seasons 1 and 2 as well as the movie A Wakening of the Trailblazer would have made for a nice touch.

Dynasty Warriors Gundam Reborn is an amazing game and more than worth the wait for it to come over. Between the vast amount of content available between the Official and Ultimate mode before even adding the DLC, there is a lot of fun to be had.