Shoot ’em up games, like platformers, are among those I really cut my teeth on when I was gaming at a much younger age, yet seldom get a chance to play one nowadays. Part of that is my fault. If I am asked what genres I like best, I will usually reply with RPG, strategy and sports. My reflexes probably are not what they used to be, back when I was able to beat titles like Contra and Life Force with ease. Every now and then though, it is fun to pick up a title that reminds me of those good old days of gaming, but better still is when the experience still brings something surprisingly new and fresh to the table. Enemy Mind does just that. 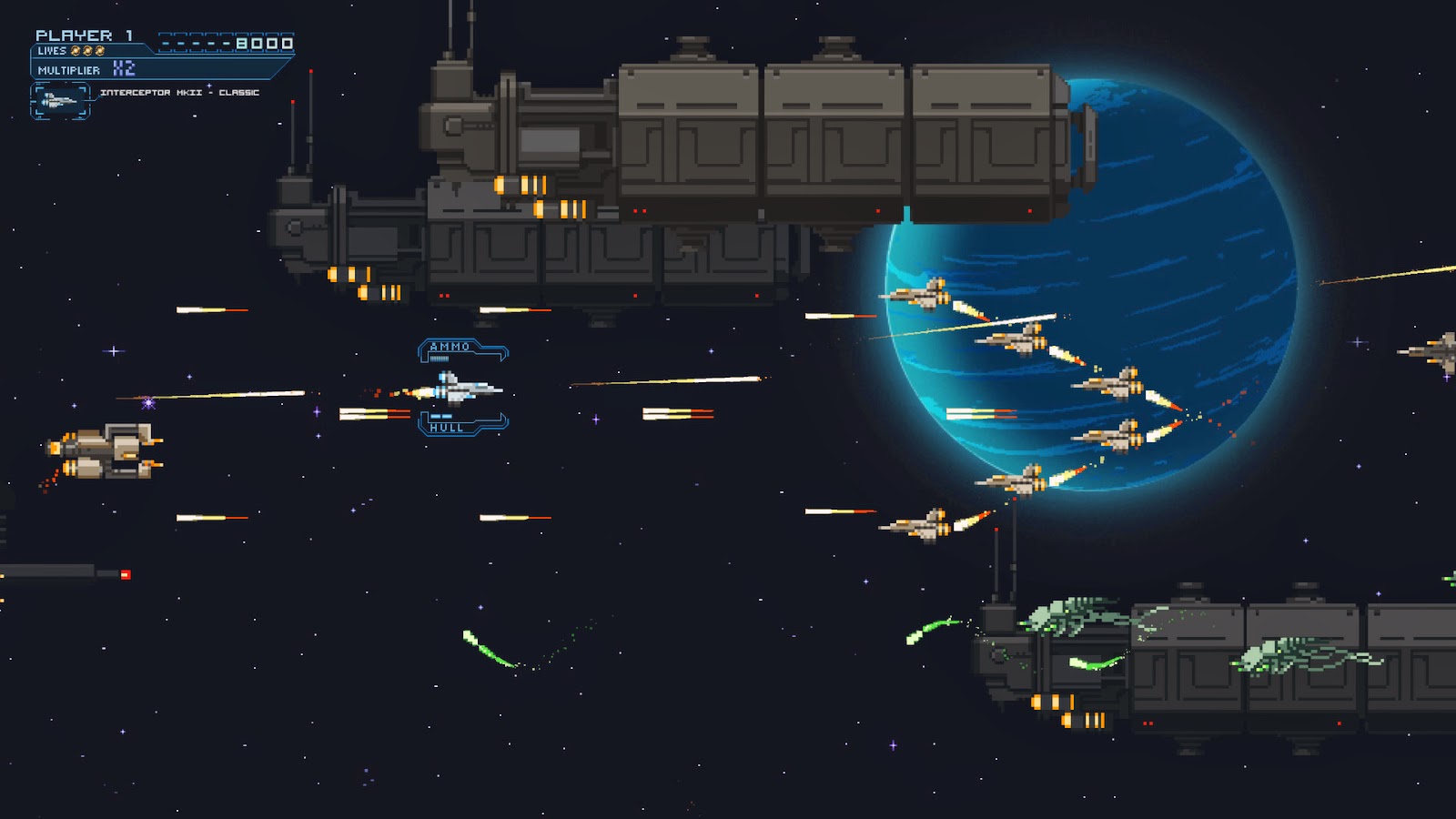 I confess to knowing next-to-nothing about Enemy Mind when I first decided to review it. The only thing I had seen were a handful of brightly colored if somewhat pixelated screenshots of what appeared to be a good old fashioned shmup. So imagine my surprise as I went through the options menu (the first thing I do in almost any game) and saw that there was a jump button as well as a fire one. Firing the weapon seemed straightforward enough, but I did not recall any screens of a character jumping about.

Turns out ‘jump’ is something a bit different, and the key mechanic that helps to separate Enemy Mind from any other shooting title I have played to date. That is not to say Enemy Mind is the best shooter I have ever played. Somewhere deep down in my heart, titles like Life Force will likely hold that honor for the foreseeable future, simply because of how many times I played through it. Enemy Mind does however, do something very unique with its jump button.

You do not necessarily control a ship – you control an entity looking to take possession of a ship. The first time I did this, it was somewhat jarring. I tried to figure out exactly where and what I was on the screen as I moved my little entity around, but I could not shoot at anything – so basically the polar opposite of what shmups are all about. I then hit that curious jump button and watched as my entity lurched forward and suddenly – I was taking control of the ship I had come into contact with. 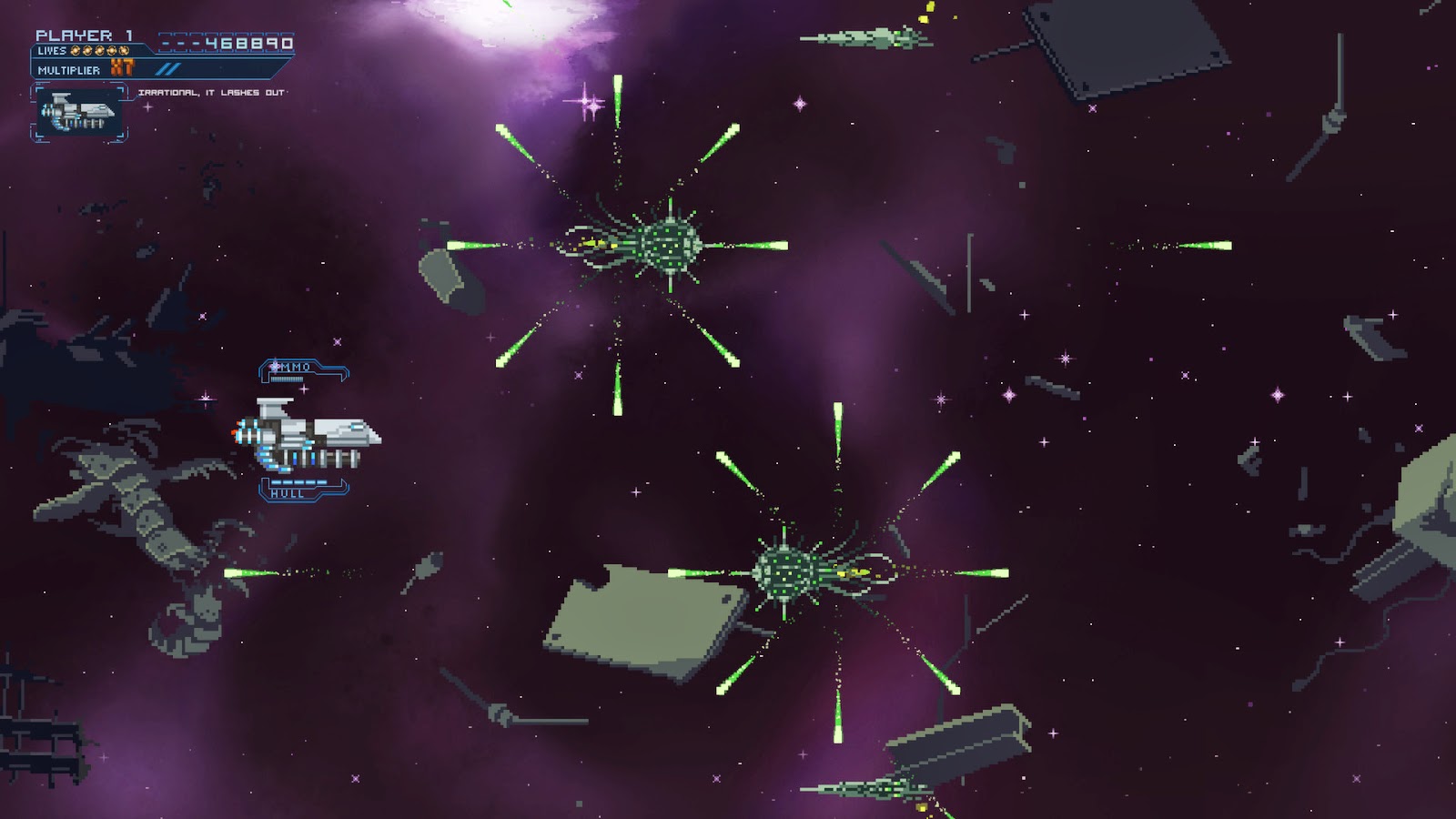 The first of these ships was a fairly basic one of average size and firing capability. So next I did what comes naturally in any game of this nature – I began blasting away furiously, blowing up opposing ships as I bobbed and weaved and began to wonder what all this jump capability could do when… I ran out of ammo? So yes, that happened – I ran out of ammunition in my shoot ’em up. Not a special laser or some sort of screen detonating bomb, but my generic cannon.

That was when everything clicked into place and I hit the jump button once again to leave my current ship behind and to commandeer a new one. This one was really quite large, serving as a sort of floating obstacle to fly around. I had not seen it shooting at me, and then I quickly realized why: it did not have any ammo of its own. Undeterred I rocketed forward and found the next ship I could see, which was firing a narrow but powerful laser. I took him over and then his laser was mine – until that ammo ran out and I was yet again forced to leapfrog into another spaceship.

This is the core mechanic in a nutshell. Some of the ships are certainly more powerful than the others, but all of that has built in checks and balances due to the limited ammunition provided each time. This puts a handful of new twists on the genre, because generally that main cannon button can be held down/tapped with impunity because it is limitless. Not so here in Enemy Mind, and that combined with jumping from ship to ship help to make this a truly unique, addicting shooting experience.

The audio and visuals are going for a retro look and feel, and they mostly succeed, though I would not have minded a bit more smoothness from the graphics, which are clearly trying to recapture some of that old school 8-bit glory. The sound effects are exactly what you would expect from repetitive space blasting as well, but the music is actually quite good. These presentation values mixed with over twenty ships and over seventy waves/stages, and there is plenty of game to be had here.

One other neat twist is what the team calls and adaptive story system. Not that the story has ever been the major focal point to this genre, but I can appreciate the attempt to try and tell a good story and once again try to break away from the conventions of the genre. The story itself seems to be impacted by what ships you are controlling at the end of stages, when the story scenes play out. It is an interesting system that encourages experimentation along the way. 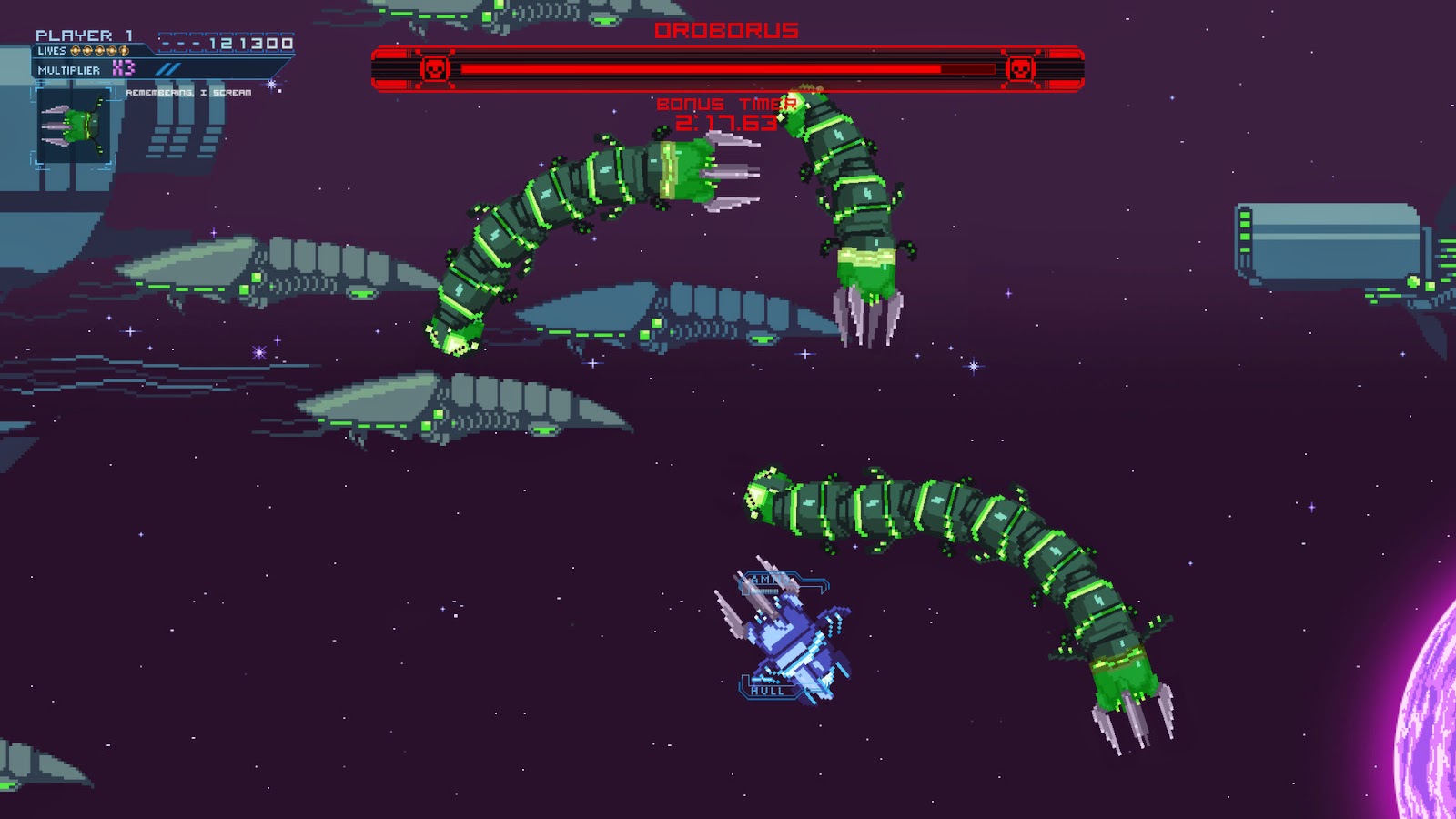 There are a handful of other items worth noting, some good and some bad. First the bad – but the pacing of Enemy Mind is a bit slower than I am used to from this genre. In that sense, it was a little easier than I expected as well. I am used to games of this nature recreating a real sense of speed, but backgrounds tend to roll by somewhat slowly and while I understand the need to make the enemies slow enough to inhabit, the pacing is just a bit off from what I would have liked to have seen. Additionally, I did run into a small bug near the end of level one where it appeared I was ready to advance the wave, but instead I wound up in some sort of a loop. Background spaceships streamed across my monitor over and over again and no new set of enemies loaded, and there was nothing to try and crash myself into in hopes of restarting the issue. This unfortunately required a game quit because the menus and everything had become completely unresponsive. Thankfully this only happened once, but seeing as it was at the tail end of the first level, it did make something of a quirky early impression.

Now for a pair of feathers in the cap for Schell Games. First, the checkpoint system is forgiving. Once you run out of lives, you are still starting at the same wave – not at the beginning of the levels themselves or the start of the game. I am apparently spoiled by all those checkpoints found in today’s games, because I was almost relieved to discover this since shmups are not my strongest genre. Also the multiplayer is pure chaotic fun. The ability to steal a ship from your friends is more fun than it should be, and while it does not make the game any easier to beat, the ensuing chaos is still a lot of fun.

All in all, I tend to have a lot of respect for games that try to do something different. Enemy Mind does this and pulls it off the majority of the time. The concept of ship-napping your opponents and using them against one another is entertaining and the sense of discovery and experimentation help Enemy Mind to stand out from most of its peers.