Download this game now!  At the time of this review, Guacamelee Super Turbo Championship Edition is the Xbox One Games with Gold free game of the month.  If it wasn’t, I would tell you to go buy it anyway.  But it is free for a short time and you will not regret downloading it.  It bothers me to think that a lot of people will let it slip by and will miss the opportunity to get a great game for nothing other than an Xbox Live Gold membership that they have anyway. 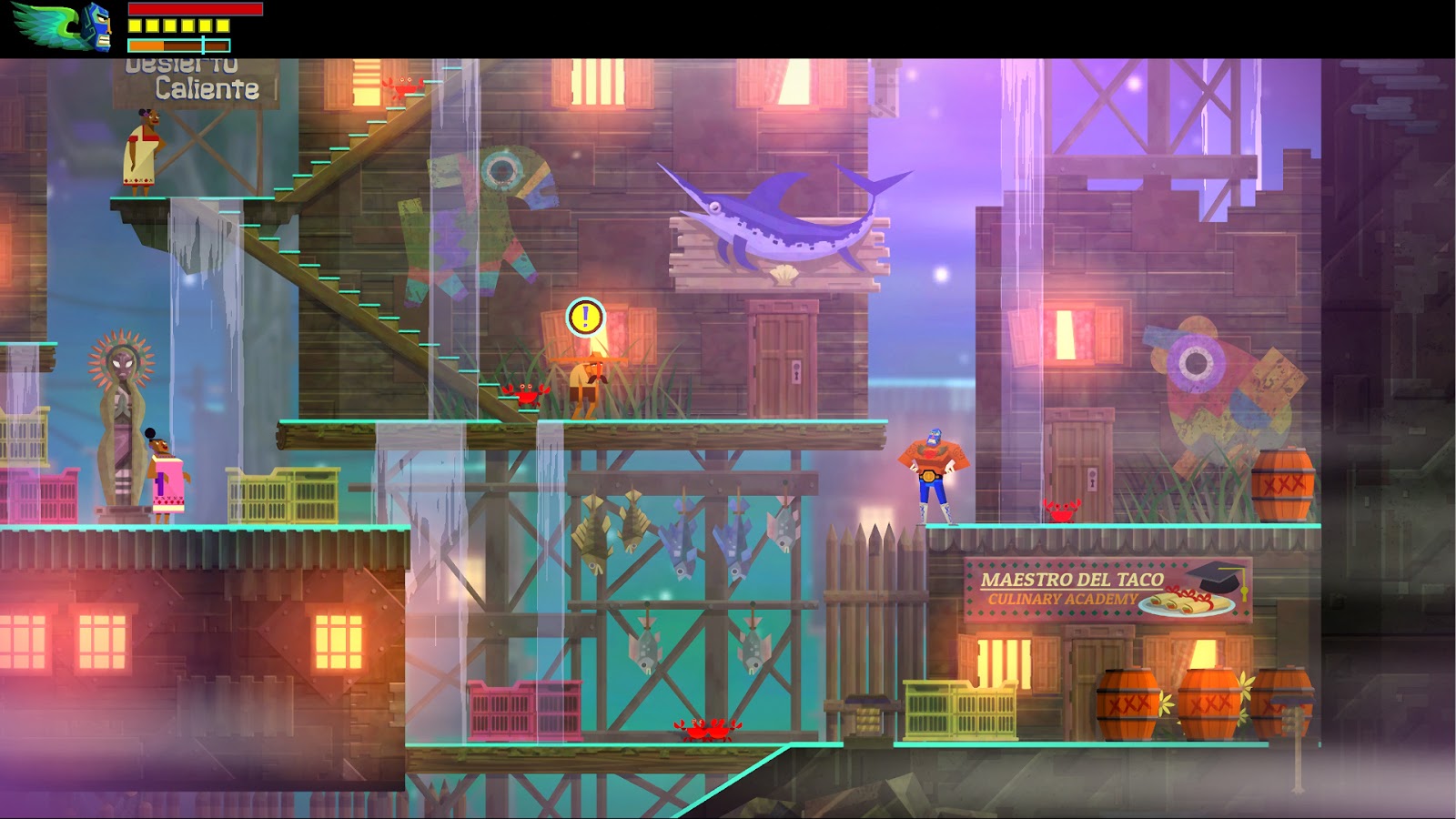 And what exactly will they be missing? (We were fans of this title when it first released on the PlayStation 3 as well. You can read Nick’s review here) It is a funny, modern, beautiful take on a classic genre with tons of references (both old school and recent).  It is structured as a “Metroidvania” game where you pick up skills and abilities throughout the game that allow you to revisit previous areas and access previously unreachable sections.  See a big blue brick blocking a hallway that you can’t break?  Chances are, you’ll be back later with some sweet new brick-breaking talent that you’ll put to good use.  See that tiny passage?  I bet you’ll learn a slide move… or the ability to turn into a chicken!?

It is moments like that that really make G:STCE shine.  They take a pretty standard skill that you would find in these games (being able to go through low passages) and rather than just give you a slide move or roll you into a ball, they subvert it just enough to be amusing.

Most of the rest of the skills are about what you’d expect from this type of game.  Double-jump?  Check.  Wall-jump?  Check.  Smash big boulders?  Check, check, and check (since there are different skills for breaking bricks above you, below you, and in front of you).  The game is great about doling out skills just when you’ve had a chance to master the previous ones.  Then it uses clever level design to really put you through your paces, forcing you to string them together. 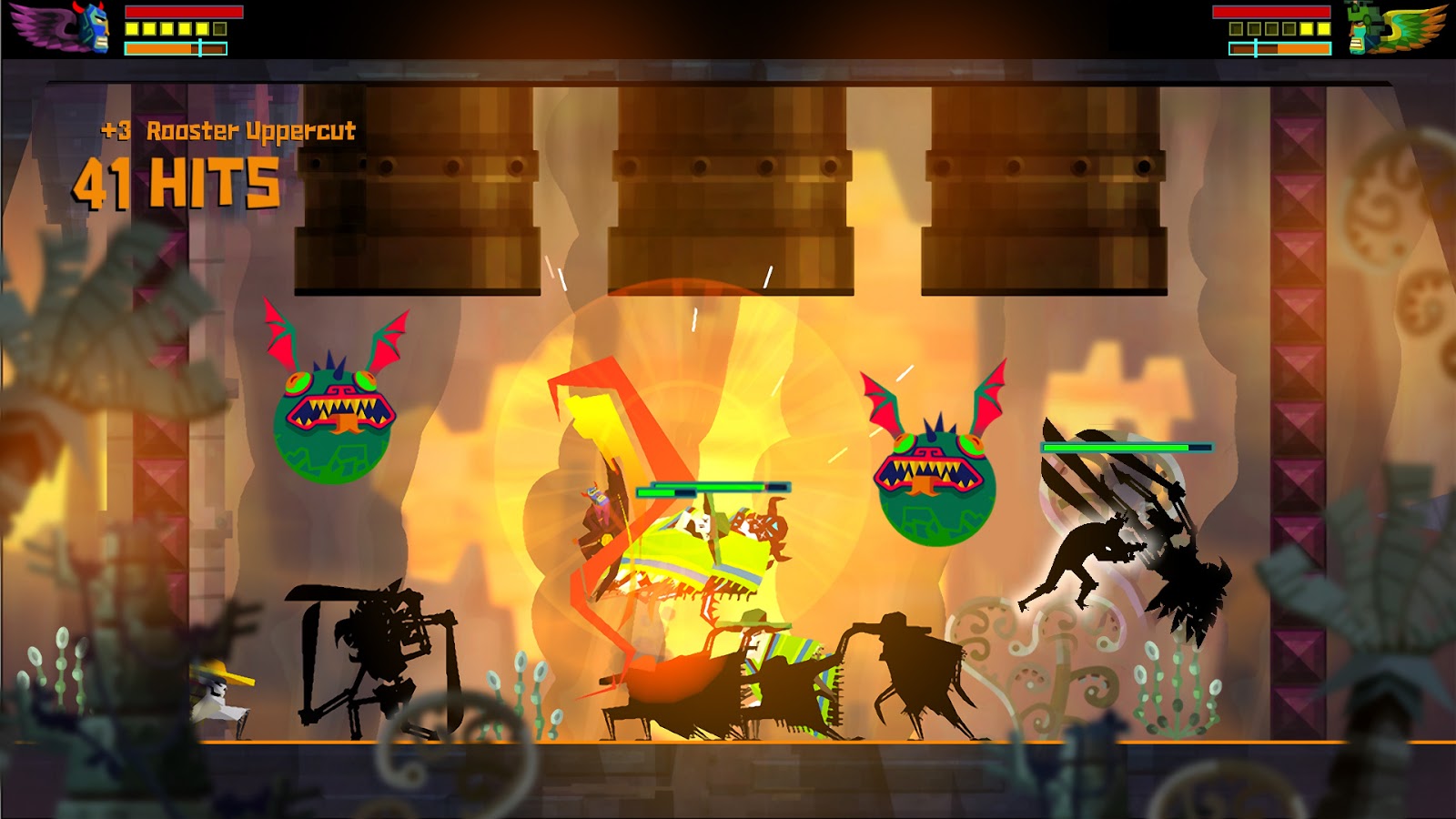 During one of its set pieces, there are portals that will flip you between the land of the living and the land of the dead.  Just like the classic Legend of Zelda: A Link to the Past, flipping between worlds changes the environment around to help you navigate through the level.  You have to spend time thinking about which world you need to be in and how to time your jump to hit the next portal to flip to the other side.  The puzzles themselves aren’t terribly difficult, but they give you enough of a workout to break up the action and make you appreciate when you’ve passed them.

Right about time you have it those portals all figured out and think you are a master, the game gives you a skill that lets you freely bounce between the two worlds with a simple button push.  Hey, that is great!  That ought to make things easier, right?  Wrong.  Now the puzzles get even more devious, making you switch between worlds as you are wall-jumping and double-jumping between pillars that only exist in one world or the other.

Coming in cold, some of those sequences would seem impossible to wrap your brain around, much less having the motor control to pull it off.  But by doling out the skills one at a time and making you put them through their paces, you are always well-equipped to handle the increasing difficulty of the puzzles. 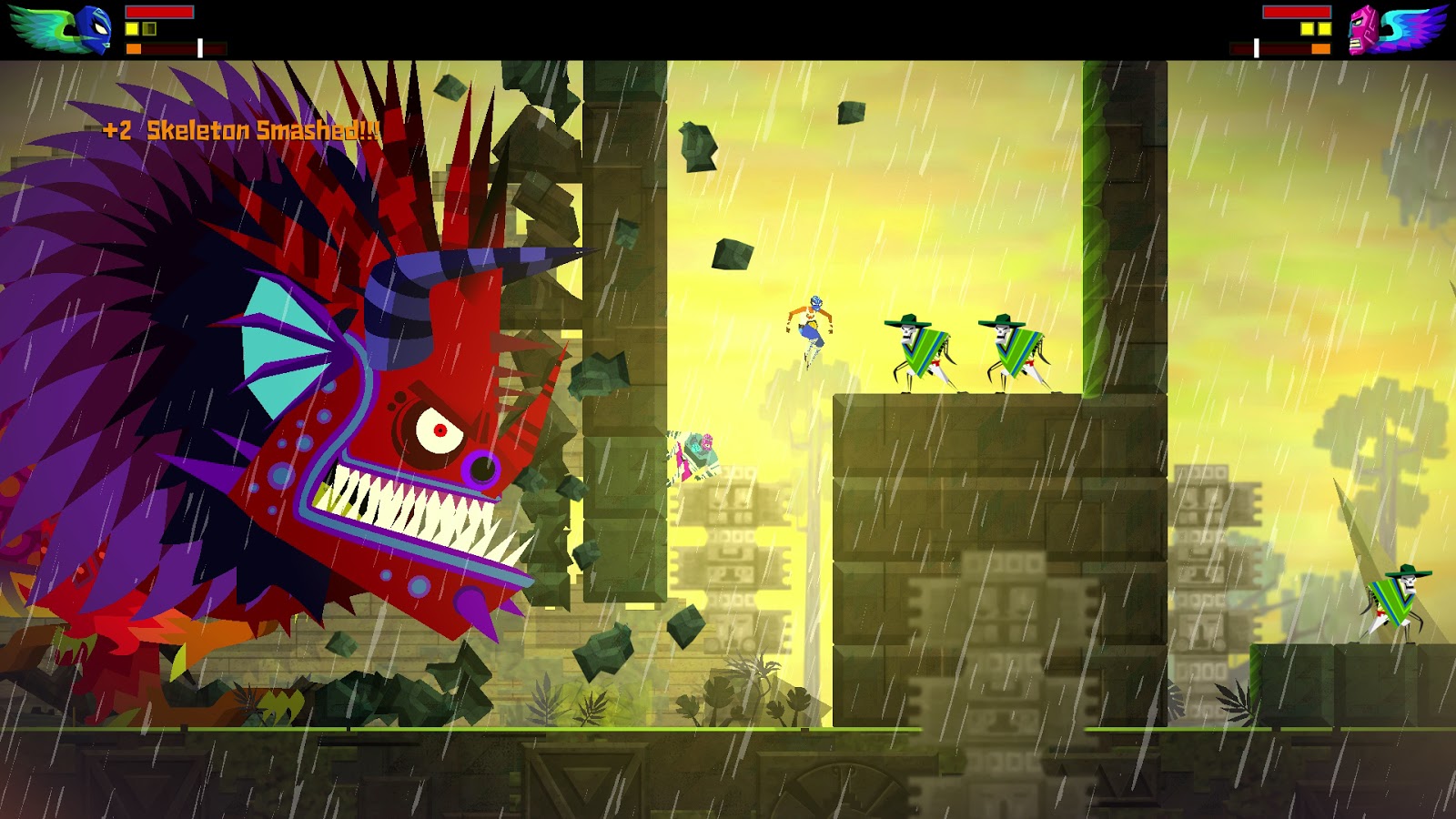 Not only is the pacing superb, but the writing is top notch.  At its core, it is really a “save the princess” game, but it uses a lot of humor and great characters to drive the story along.  Every young farmer-turned-savior needs their Obi-Wan to teach them the ways of the Force.  This game is no different.  Our young agave farmer, Juan, needs to learn new skills courtesy of Uay Chivo, who is blessed with enough snark to make him stand out in that particular archetype.  Every time I saw one of the statues that would summon him to give me a new skill, I was excited.  Not just because it meant learning a new ability, but because I wanted to see what good ole’ Uay had to say this time.

To top it off, those sequences have one of the most blatant homages to it is roots in the Choozo statues, which even my kids recognized as the Chozo statues in Metroid that grant you new abilities.  The game also uses these to poke fun at genre conventions by having Uay get exasperated by the wanton destruction of his property.

Gamers with a keen eye will also notice tons of other references scattered throughout the game.  In some cases, it is part of the background art, like posters, statues, or hieroglyphics.  Sometimes, it is much more overt, such as the battle/chase with the giant dragon.  Once you see what is at the end of the chase, you know exactly how it will end.  And it doesn’t disappoint. 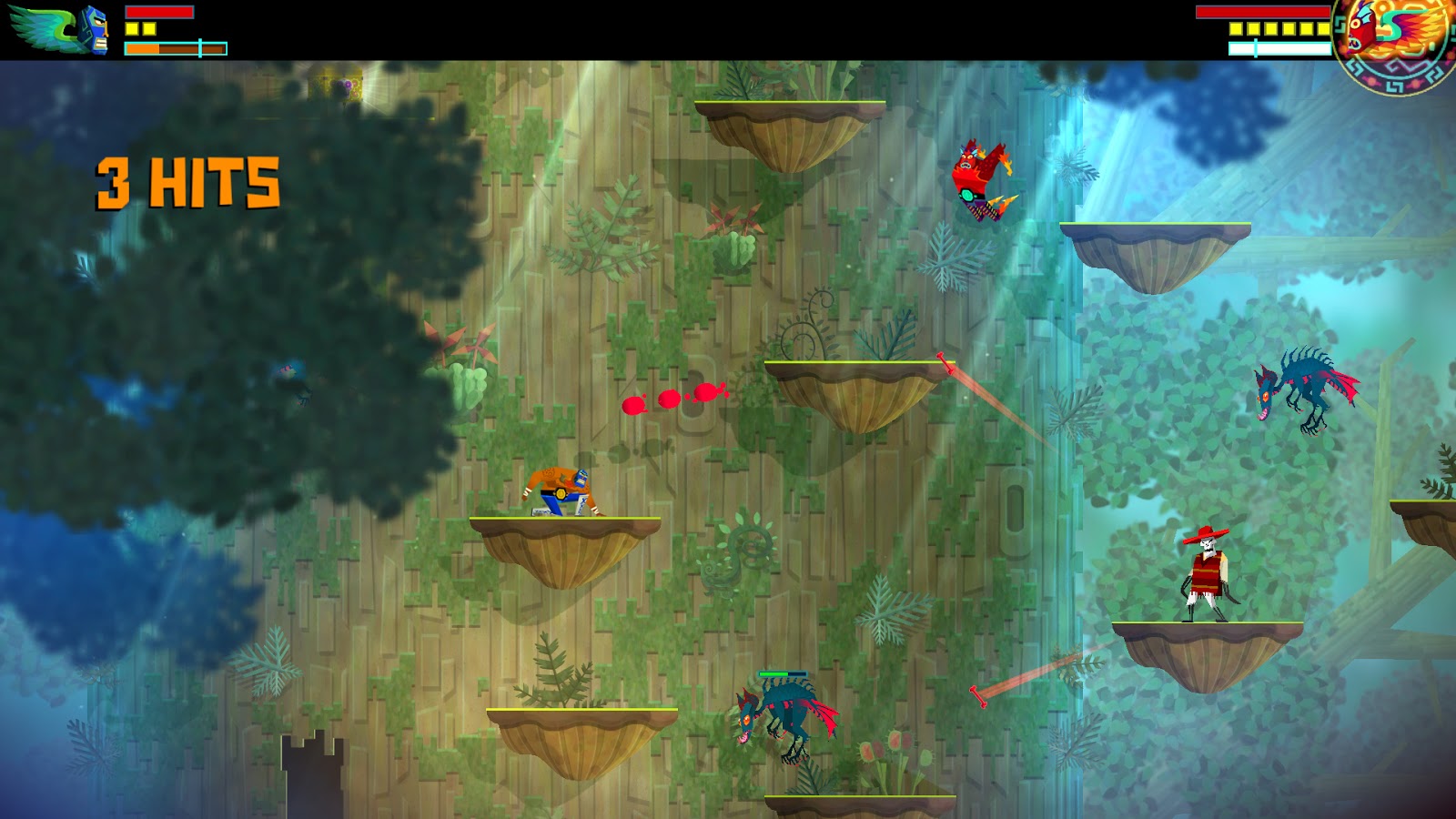 Graphically, the game looks great.  The animation is nice and fluid and the art style absolutely nails the Mexican aesthetic.  It really put me in the mind of Grim Fandango, which is never a bad thing.  More games really ought to look for inspiration outside of Tolkien and Aliens because it is a nice breath of fresh air.  The character models look great, and can get pretty big depending on how far it wants to zoom in for particular areas.  The music complements the mood perfectly. It never gets in the way, but helps immerse you into this neat world.

For me, one of the best things about G: STCE is local drop-in/drop-out co-op.  My favorite games on the NES were Contra, Ikari Warriors, Lifeforce, and other games that I could play with my friends.  I started playing this one solo, but as soon as one of my kids saw me playing, there was no stopping him from picking up a controller and jumping in beside me.  Luckily, it was early enough in the game that he was able to learn the skills along with me and could traverse most of the puzzles alongside me.  (He’s seven BTW, if you are wondering if your kids could pick it up.)

For co-op, they borrowed the respawn mechanism from New Super Mario Bros, where the player spawning in appears in a bubble that floats around the screen (although this time, it is a symbol or portal).  Just like in NSMB, it can make things like boss battles a bit easier, although it introduces some tension through the tactic of just dodging around hoping that you can avoid getting hit that last time so that you can revive your partner when they can get back in.

Overall, there is very little to dislike about the game.  I think the length is about right (around 6-7 hours to beat the first time).  Any longer and it could start to feel like a slog.  As it is, it would be nice to have more variety in enemy types.  You may get tired of seeing the same skeletons attacking you near the end of the game as the beginning, but upgraded with shields that can only be taken down by a specific attack.

You do have to be careful with the drop-in co-op in that anyone dropping in later in the game really needs to have spent some time figuring out the skills.  There are some puzzles near the end that require you to be wall-jumping, double-jumping, switching dimensions, doing a flaming upper cut to gain extra height, and activating your shield to dodge through spiked traps all within a single move.  You will use all the buttons on your controller, that is for sure.  If you’ve been playing steadily up to that point, you’ll have the coordination down to be managing all of it.  Anyone jumping in for the first time, though, is going to struggle without some practice.  And besides, anyone dropping in that late is just going to miss a lot of the fun that the game has to offer anyway.

I can’t speak to what makes the “Super Turbo Championship Edition” any different than the original PS Vita version, as I’ve never played it.  This version is spectacular, though.  You can tell that the developers at DrinkBox really had a lot of love for the genre and spent a lot of time making sure that they captured all of the best elements.  Too often, games feel either too-copycat or too-different-for-the-sake-of-being-different.  This one really strikes the right balance.  It truly is an homage to the genre with enough modern twists and winks of the eye to keep you entertained.

And right this second, it is free!  Why haven’t you downloaded this yet?

If I couldn’t get to you soon enough, and it isn’t free anymore, you should still do yourself a favor and pick it up anyway.  It is a better game than most of the ones that cost $59.99 or more at a fraction of the cost.

Everything this game tries to do, it knocks it out of the park.

Kickstarter Launches for a North American Version of Sakura Arms!