When I first heard about the Lightpack Ambient Lighting System I was pretty stoked since I remember back in 2006 when Philips released their Ambilight line. I was very interested in it and as I worked for a Magnolia Home Theater, I was able to stare at it all day long. While the Ambilight line of televisions ultimately failed, what they were able to do with the ambient lighting is still ingrained in my memories as being another way to pull you into a movie, sporting event, video game, or TV show. When I cam across information for Lightpack I was near instantly hooked and thought to myself “I have got to get me one of these” and much to my viewing pleasure, I got one a few weeks later. 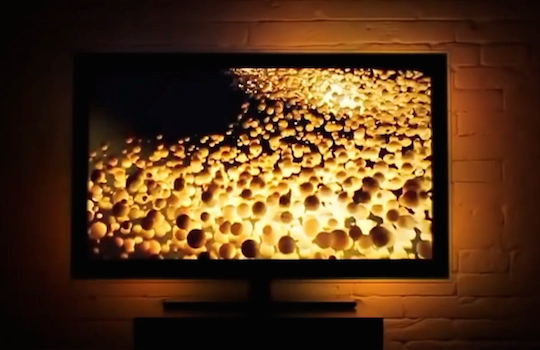 Before I go into that I just want to give you a bit of a background on me; I worked selling high-end telelvisions back when EDTV’s (Enhanced Definition Television) were all the rage as they were the first really marketable (and affordable) “flat panel” televisions. Along with the emergence of the EDTV craze I was also selling televisions when the HDTV craze started, I loved it and I really enjoyed the technology and the different capabilities of the different models; it was exciting. While it was a wonderful (but very stressful) job I ultimately moved on, but one of the biggest hurdles that I had was my eyes; I am “color deficient” and have some pretty not-so-awesome issues with seeing the full color spectrum.

To give you an idea how bad it is, there are (I believe) 15 plates in the Ishihara Color Vision test ( that is the one with the circles made up of dots ) and I am so awesome that my score is 2/15… While you may be thinking “man, why is he reviewing an ambient lighting system then?” Well, I can see color, I see a full range of color, but to my eyes what may be green to you is brown to me, or what you see as blue I see as black, but working in the television industry for years (not to mention being color deficient for my entire life) teaches you a number of little tricks to discern what colors are what and I am now able to go through and see things just fine (most of the time). With the Lightpack Ambient Lighting System, since they are made up of primary colors, I have no issues comparing the ambient lighting to the colors that is on screen. 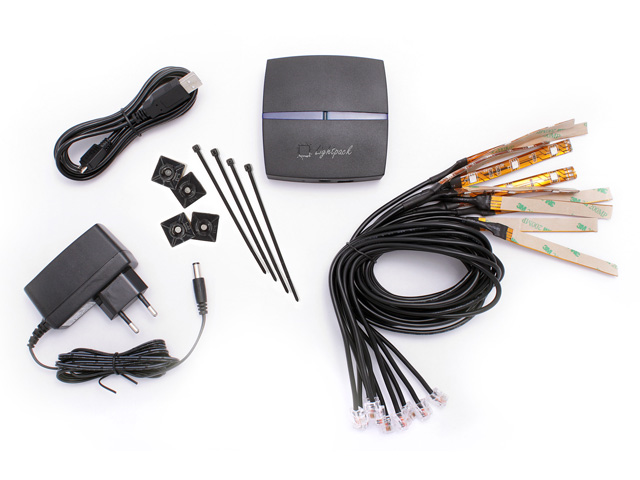 The day that the Lightpack arrived I was a bit confused, the packaging was small; very small. Looking at the package I was trying to remember which game or device I had gotten that could come in a package that was no bigger than a hardcover book. Once I tore through the bag and popped open the box did I realize it was the Lightpack ambient lighting syste; I was stunned that they managed to fit so much into a tiny little box, but fit it they did and without crimping wires or jamming things into a bulging package. The unit simply that small and as the saying goes, “good things come in small packages” and that certainly holds true today with the Lightpack. In truth I was expecting something bulkier and less… compact, after all the old Phillips Ambilight plasma televisions we massive as the lightbars added a ton of weight and depth to the frame of the system. 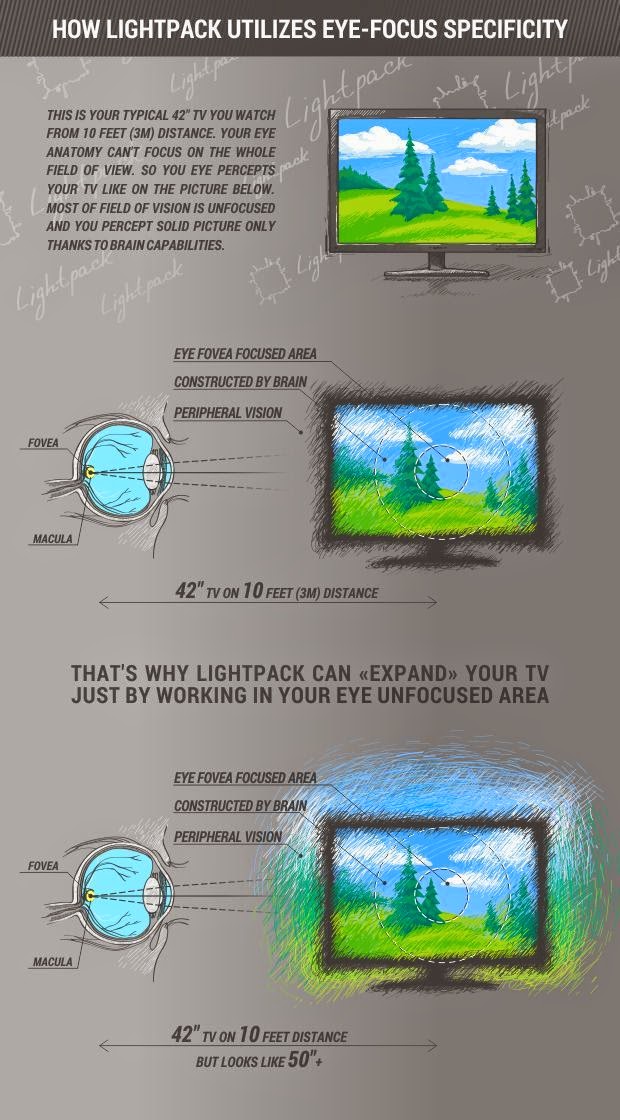 Not the Lightpack. Outside of the small main body, which is a little larger than a 2.5″ external hard drive, there is next to nothing to the unit. There are a total of ten cables that end in an LED strip that self-adhere to the television (but is not so sticky that it rips the back of the TV up) in one of three different setups. Fortunately there is a quick start guide that comes with the pack that shows you the different layouts for the wires, otherwise it would become a crazy mess. Once I had the physical unit connected all I needed to do was plug the Lightpack into my computer with the provided USB calbe, then I had to get the software loaded and configured and I would be on my way, and between installing the Lightpack, downloading and configuring the Prismatik desktop software that drives the Lightpack, I spent no more than 15 minutes getting everything set up. Once I chose the appropriate profile that matched the layout of the wires I was ready to go.

So there is something I would like to note before I go into any more detail; the Lightpack requires software to run, this means you must have it hooked up to some sort of computer / HTPC and that you cannot hook it up to, say an Xbox One. That being said, once I had my laptop plugged in and my inexpensive Logitech keyboard and my SteelSeries Sensei Wireless Gaming Mouse (check out my review!) all squared away, I turned the TV on and flipped over to the correct input. Now, I probably did not have the best background for my computer’s wallpaper since the light from the Lightpack did not seem to do much, though my daughter was exclaiming how great it was, I chalk it up to my “color deficiencies” ( I refuse to call it colorblind!).

So I did what any self-respecting gamer and connoisseur of anime would do; I dug up an old anime ( the Appleseed movie that was released in 2004 ) that I knew had lots of action and lots of colors shifting throughout it. Once I loaded up the disc and skipped ahead a few chapters, I turned all the lights off in the house and started the movie up. I was incredibly impressed; the lighting was rich, colorful, and vibrant without being overwhelming. The most impressive bit though, was how fast the LED lights would respond to the content that was happening on-screen. I admit that I expected a split-second delay but was completely and utterly surprised at how fast the little Lightpack unit translated the action on-screen to ambient lighting off screen. Like I said, I was impressed. Since I was so thoroughly impressed with the movie scene, I wanted to see what it would be like in a video game so I booted up Dark Souls 2 (check out my review of Dark Souls 2!). Once I got into the game I realized that maybe it was not the best of games to try and then I got back to Majula (the central hub in Dark Souls 2) and the dark and dingy appearance of No Man’s Wharf suddenly gave way to the stunning and bright ocean-view that the sandy cliffs of Majula sport and the Lightpack instantly changed gears and kept pace while running around town at 60 Frames Per Second. I was thrilled. 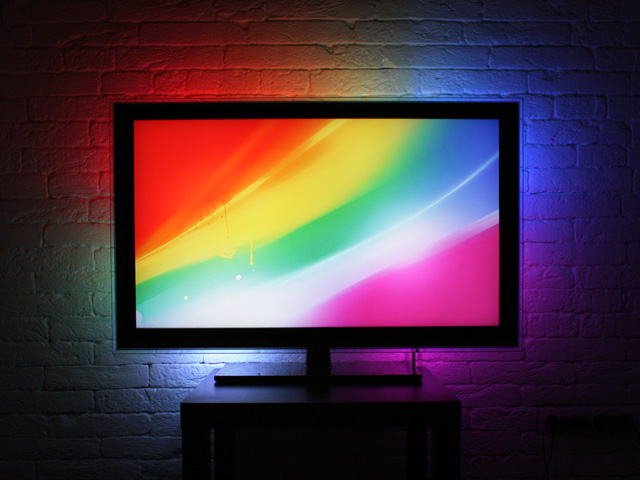 All in all the Lightpack Ambient Lighting System is awesome; from the relatively low cost to the speed at which the lights change, the Lightpack helps to immerse you even more into the content on screen. I would like to see a bit more functionality out of the software and perhaps some basic documentation on how to create and customize your won profiles, as that could add a little more spunky to the already excellent profiles. It would also be extremely spectacular if the Lightpack were to act as an HDMI pass-through and be able to adjust the ambient lighting in that manner, that way I could have the extra fantastic ambient lighting effect while ripping across the track in Forza Motorsports 5 or watching an auto-titan crush some hapless noobie in Titanfall; maybe some day but for now I am completely happy with the ease of use and the great effect that the Lightpack Ambient Lighting System had on both my gaming and my movie watching and I highly recommend it to those of you that want to maximize your viewing experience.