TagsMagic 2015 - Duels of the Planeswalkers, PC Review, Stainless Games, Wizards of the Coast

My foray into Magic: The Gathering began in the late 90’s. Spotting the Portal starter set on sale behind the counter at a chain bookstore, I convinced a friend to split the cost with me. This first foray was brief, as my young self didn’t have the income to fuel a collectible card game addiction. In college, I had a set of friends that fell in quite deep, attending Friday night matches and release tournaments, but cost remained prohibitive. It was not until about a year ago where I really took the plunge, buying booster boxes along with my colleagues and our own dear Editor in Chief here. Spending more money than I care to admit, I loved the act of opening a booster, creating a deck, and then tweaking it after seeing how it fared against my colleagues. Though I have been clean of the physical cards for about a year, I have still picked up the various Magic: The Gathering releases on Steam to scratch the occasional itch. 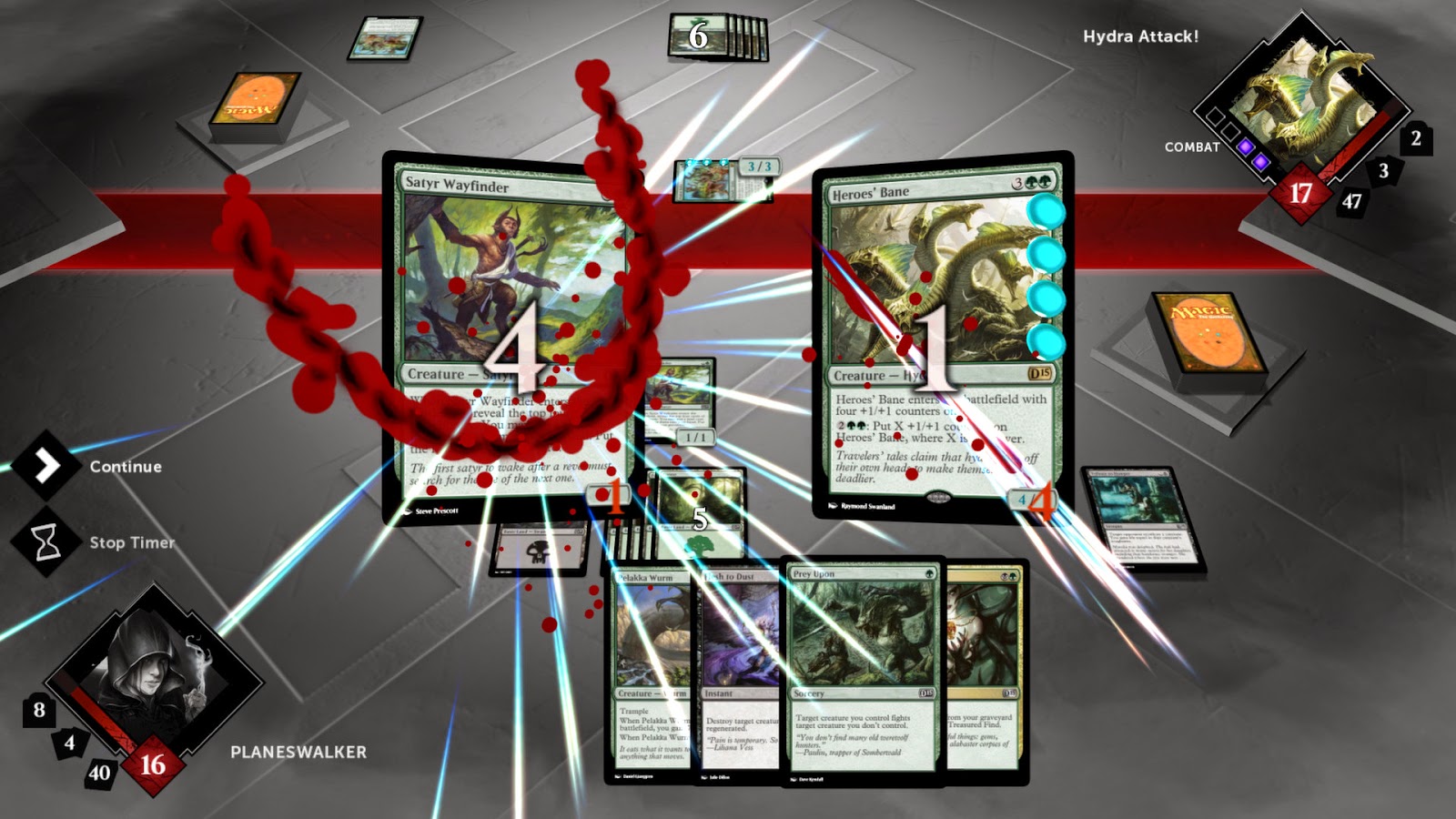 In the fifth iteration of the Magic: The Gathering – Duels of the Planeswalkers release, the Magic 2015 release tries to advance on the foundation of the earlier games. These games have served as a starting point for prospective new players to introduce mechanics, but also to tease some new cards and play styles that will be coming out in the physical card release later this year. The initial release in 2009 sought to simplify the extremely complex Magic collectible card game system into a downloadable game on Xbox Live. Restricting players to the usage of pre-constructed decks built around a theme, and automating some of the logic required to play cards, it was an extremely dulled down experience. Subsequent releases lead to different game types, drastic interface improvements, and most importantly, greater deck customization. With Magic 2015 touting full on booster pack unwrapping and deck building, could this be the game that die hard fans have been waiting for?

Before you can even get into a game, you are met with a beautiful introduction video and interface, which is quickly marred by sluggish response and overwrought, yet still lacking, functionality – a dichotomy that sets the stage for the overall experience. Developer Stainless Games put a lot of effort into the flash and pizzazz of the game, making it quite beautiful to look at. But the game was very clearly designed for a controller to be the main method of interaction. Worse still, menus can be hard to navigate when looking for a particular option, as you have to scroll through an arc of nondescript icons, and often have to click an option multiple times for it to react.

In the menu itself, there are two drastic changes – the addition of the deck building system, and the remove of alternate game modes like Planechase or team battles. The former is the big selling point of Magic 2015, while the latter seems like an unnecessary omission, as those were some of my favorite battles from last years release. Instead, you are left with a simple, linear campaign of one-on-one fights, and a multiplayer option that is in the same vein. There are some interesting fights where the AI has unique goals, such as getting a set number of Gate cards out in order to win, or interesting deck themes such as Slivers or Allies, there is little to spice things up along the way. That may seem like a silly demand for a Magic game, but that taste of things like Planechase from the 2014 release lead to a desire that simply isn’t fulfilled. The one good thing about each fight is that winning will give you a booster pack of cards, just like a physical booster. A satisfying animation unpacks your set of 15 cards, making them ready for the deck builder.

Before you can even get to experience the deck builder, you will have to grind out some boosters – which can be easier said than done. The first glaring issue here is that the game locks you into a starting deck after your first battle, with little information about what deck you are getting. You get to choose two colors (I opted for a White/Blue deck to start) and are given a vague description of what kind of role that combination will play. Another battle occurs, and give you the option to back out of the deck if you wish – but if you do not do so, you are locked into that deck, until you have enough cards to make another deck. While my White/Blue deck comprised of some small life-steal, life gain, and fliers, fared fairly well at first, I quickly ran into a wall where that deck was simply not viable. I did not have enough cards unlocked to make a cohesive deck of another color, or to really alter my current strategy. I was therefore stuck either shelling out real life money for additional booster packs or entire sets of cards, or to keep trying the same fight over and over hoping for the luck of the draw to go my way. Unwilling to shell out the cash, I restarted the same battle multiple times, even lowering the difficulty to the lowest setting – which seems to have absolutely no effect on the game whatsoever. At least in the previous games, you could restart a fight and choose a completely different pre-constructed deck, but that is not a luxury afforded here. 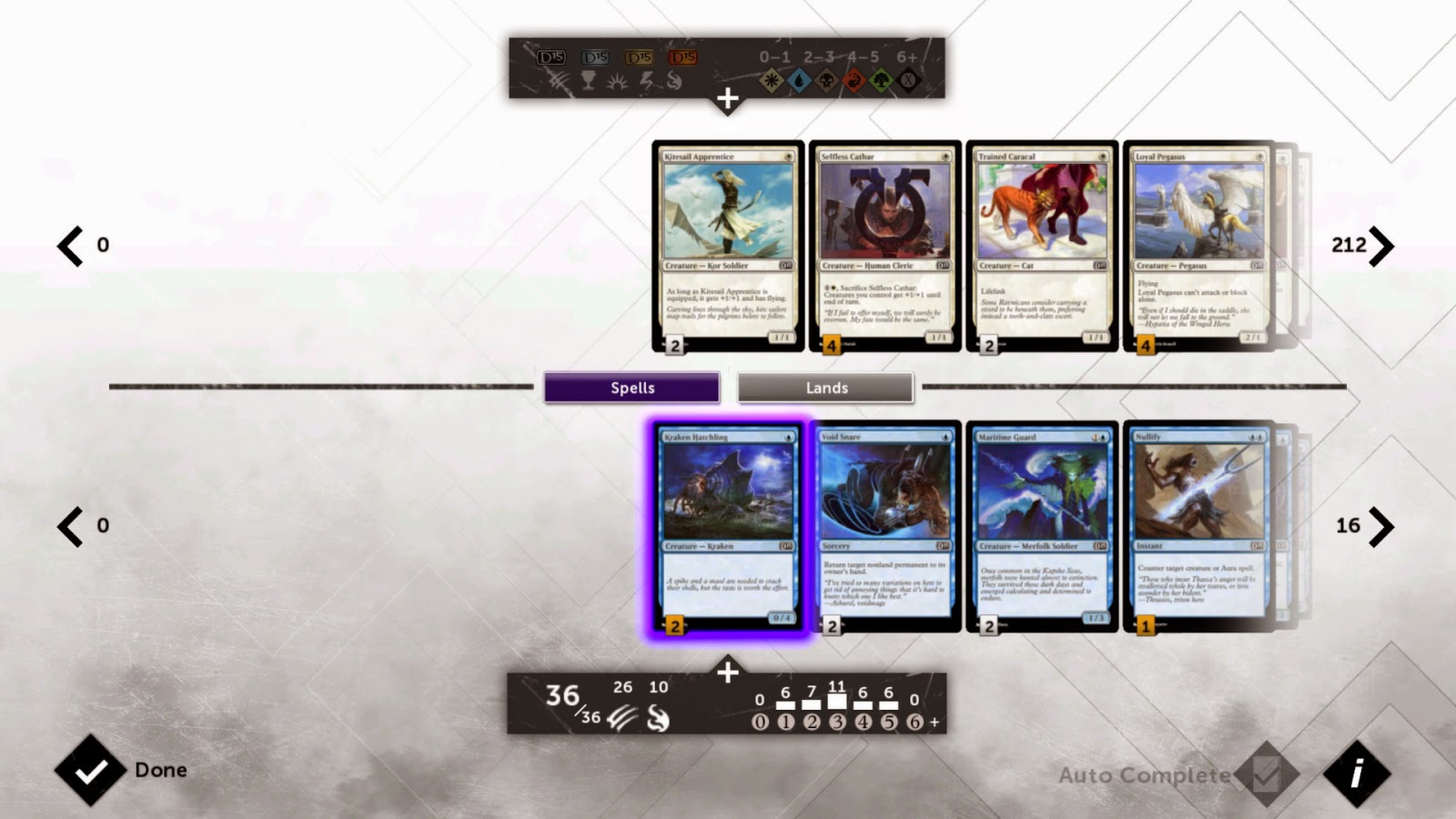 While the aforementioned deck builder gives you more control than any previous Duels of the Planeswalker release, it doesn’t quite fulfill that role that fans have been clamoring for. The biggest issue is the fairly limited card pool – around 300 in all. For an additional $25, you can unlock all of the different cards, or you can press your luck by buying individual random booster packs at $2 each. This causes the game to toe a strange line between the sealed deck play of the 2014 release, and Magic: The Gathering Online, which is a complete digital analog to the collectible card game, where all cards are available, and digital boosters are purchased for each set. Further insult is added when you realize that certain AI fights are using cards that are simply not available to you – Slivers and Allies were the two that stood out to me especially. The tools provided to manage your decks are very well done, and I enjoyed that added level of flexibility, but the whole experience seems like a disingenuous turn away from earlier releases providing a fairly complete, self-contained experience.

For fans of the Magic card game, or those curious about getting into it for their first time, I simply cannot recommend this 2015 release as the jumping off point. Last years release, though only providing Sealed play and not a fully customizable deck editor, does enough to scratch the building itch without feeling exploitative. It also had some additional modes that were stripped out, and a working, automated mana management system. The new release tends to select all mana of one color, despite that being a very poor move – something that bit me pretty hard when I was trying to speed through a match. In what had been an ever evolving series that was more exciting with each iteration, Magic 2015 – Duels of the Planeswalkers is a surprising step in the wrong direction.