comments Share
You are reading
My Jurassic Farm – Wii U Review

With a title like this, one can generally assume that a game like My Jurassic Farm may be very similar to popular titles like Zoo Tycoon – but with dinosaurs. Turns out, my assumption there was wrong, as it feels very little like a Zoo Tycoon game. Given the recent talk about Jurassic Park, a game themed around raising dinosaurs was bound to happen, and as a result we get a decidedly average entry into the virtual life genre. 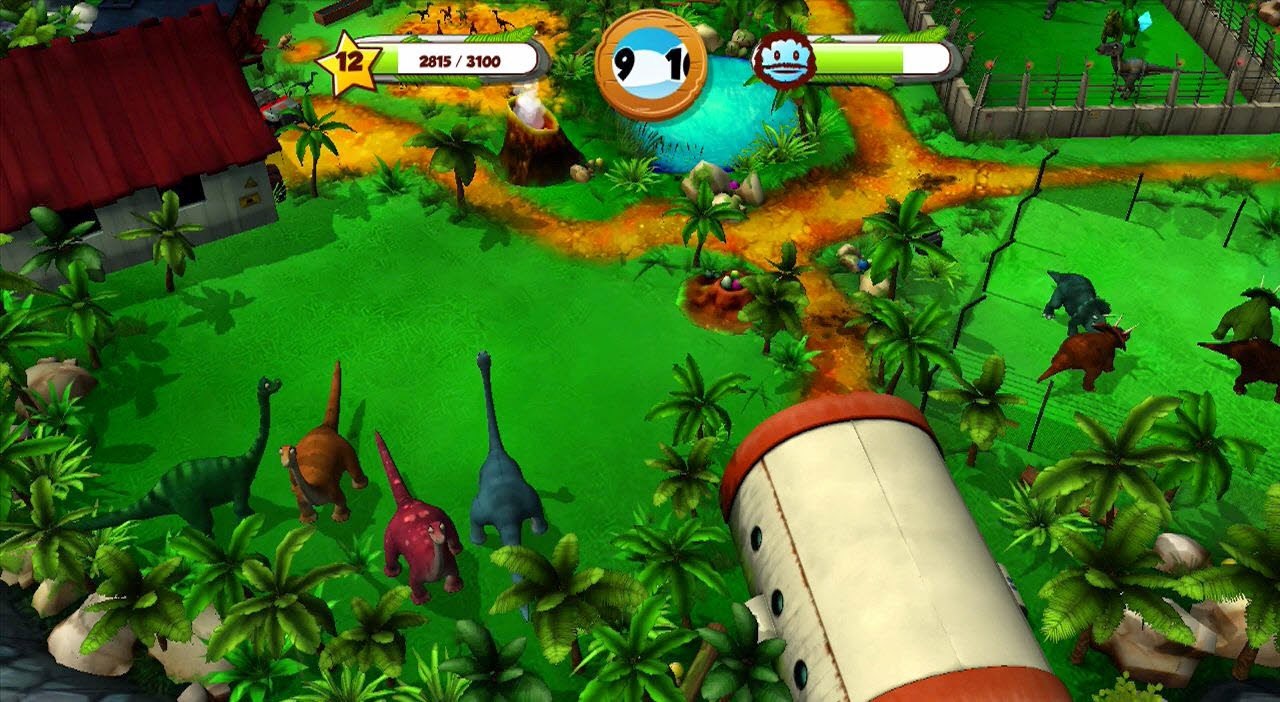 At times, it felt as though My Jurassic Farm did not know if it wanted to management game or a pet game. There are elements of both here, though the gameplay itself comes across as somewhat bland in the end. First off, you start with a handful of text boxes and forced clicks before throwing you into the early stages of the game where the tutorial does attempt to teach you everything that you need to know. The game itself is not terribly complicated, so the tutorials do a sufficient job on that front.

The majority of your time will be spent moving back and forth between animals as you ensure that they are fed and cleaned. This will allow them to grow, or sometimes provide drops like eggs or feathers. Every once in a while however, they will wind up getting sick. When this happens, you need to treat them with a medicinal item and then feed them repeatedly. 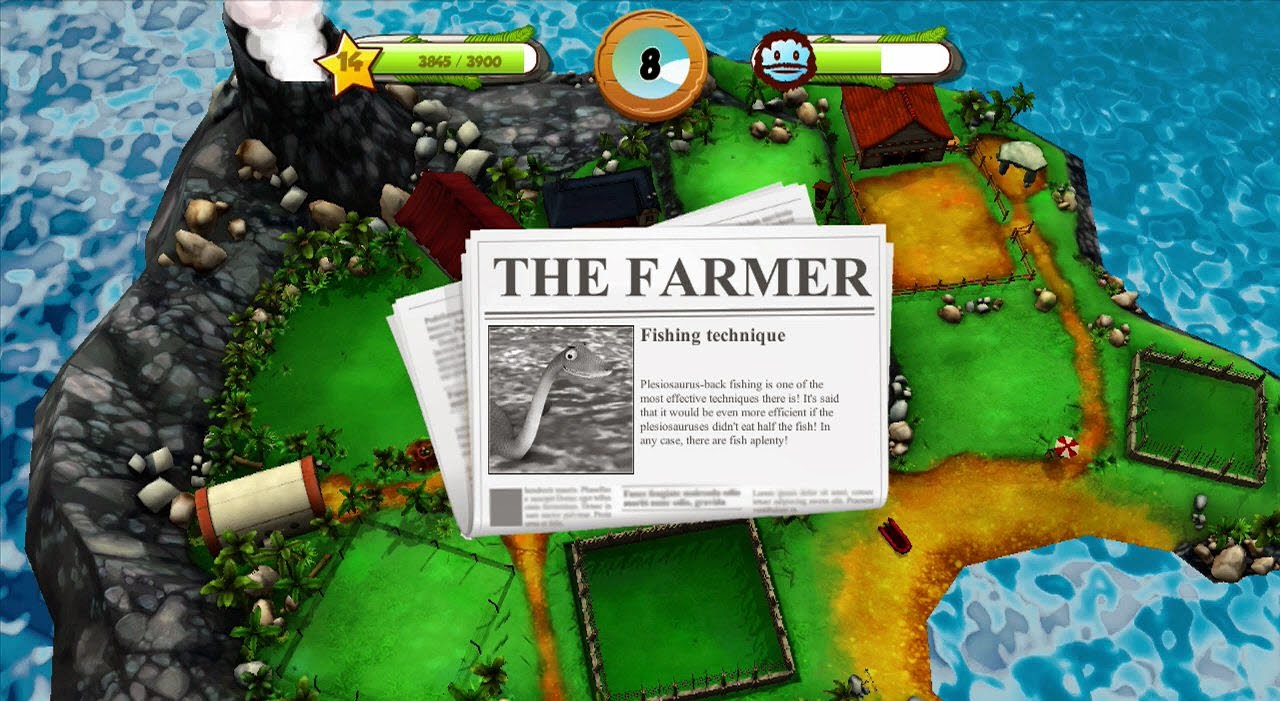 Time can also be spent purchasing things and cleaning up the farm a bit by swiping the stylus over the gamepad a few times. Last but not least, you can buy and sell things as you attempt to sell either adult dinosaurs or the drops that you sometimes acquire. You can also purchase items that allow you to grow your farm and have more dinosaurs occupying it. Beyond that, there are some opportunities to interact with or play with your dinosaurs, which is the ‘pet’ aspect of the game, but these movements are so basic that these interactions will likely wear thin entirely too quickly. There is a sense of progression, but in the end if feels shallow – like a missed opportunity to unlock and do more.

The presentation does not fare a whole lot better than the gameplay, in that the visuals and audio get the job done without really adding a great deal to the experience. Clearly this title is aimed at younger gamers, so the generic sound effects and tropical music more or less feel like they are there for the sake of filling space, but lack imagination as they just sort of blend into the background. Visually it is easy to tell one type of dinosaur apart from another, and the backgrounds never do anything to cause confusion. The menu is easy enough to get around, but in the end My Jurassic Farm will by no means push your Wii U’s hardware as it feels more like a DSiWare or Nintendo e-Shop title. 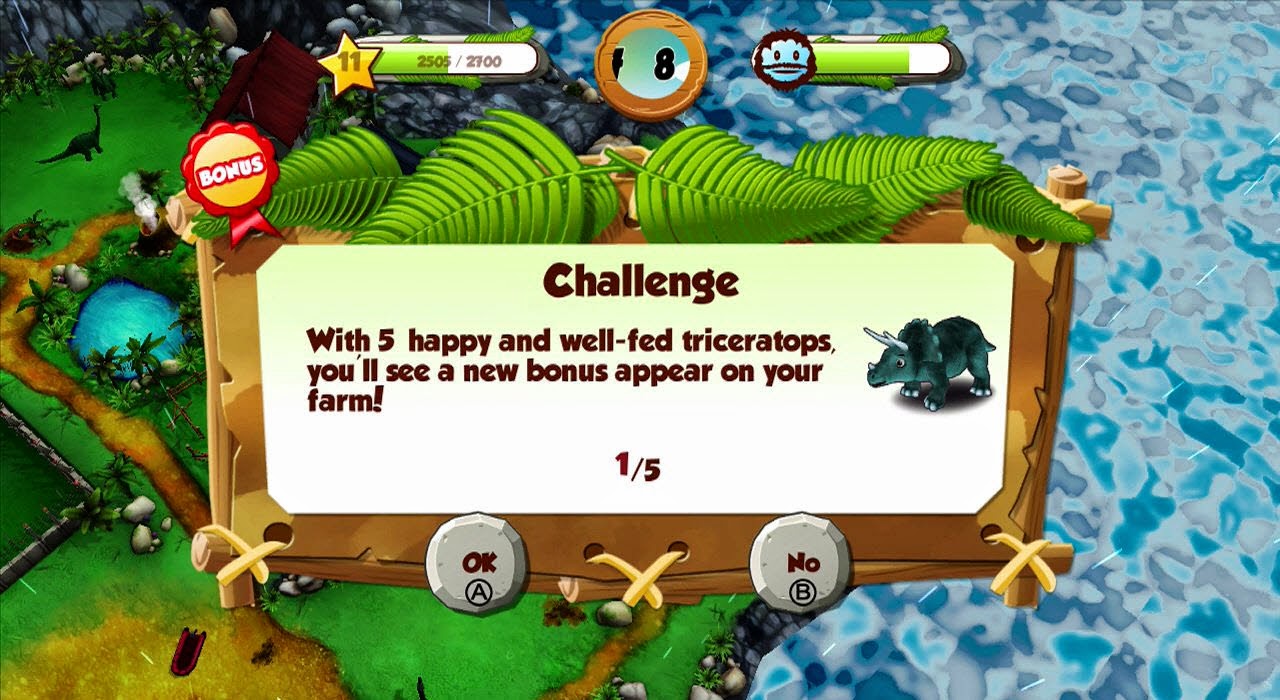 That is not to say that My Jurassic Farm is a horrible game, in fact it does just about everything it sets out to. The graphics and audio are understated, average affairs that may appeal to a very young gamer who may enjoy the cuddly-looking dinosaurs, vivid colors or perky (if repetitive) music. For anyone who is older and hoping for a game with a bit more depth, like the Tycoon series, they will undoubtedly come away disappointed. Going through the motions is easy enough to do: feed, clean, pick up an egg, sell, buy, lather, rinse and repeat with very little variety built into the game. The longer one plays My Jurassic Farm, the more you can expand, but at that point the game becomes more about managing more stuff, and not necessarily about doing anything new and exciting.

That is probably the biggest takeaway from this game: My Jurassic Farm may entertain the youngest of audiences for a time, but in the end the repetitive gameplay and presentation will show My Jurassic Farm for what it is: an average game that is unlikely to appeal to most gamers for any length of time.