Tower defense is one of those genres that seems to pop up quite a bit over the last couple of years. I suspect the developmental overhead is a bit lower compared to other titles, once the basic assets and balancing is worked out. Most tower defense titles have a tendency to do one or two things decently while hoping that the rest of the game gets by. Rush for Glory actually does just about everything right along the way. It is not the best example of the genre, but Rush for Glory creates a challenging if short gameplay experience that is fun while it lasts. 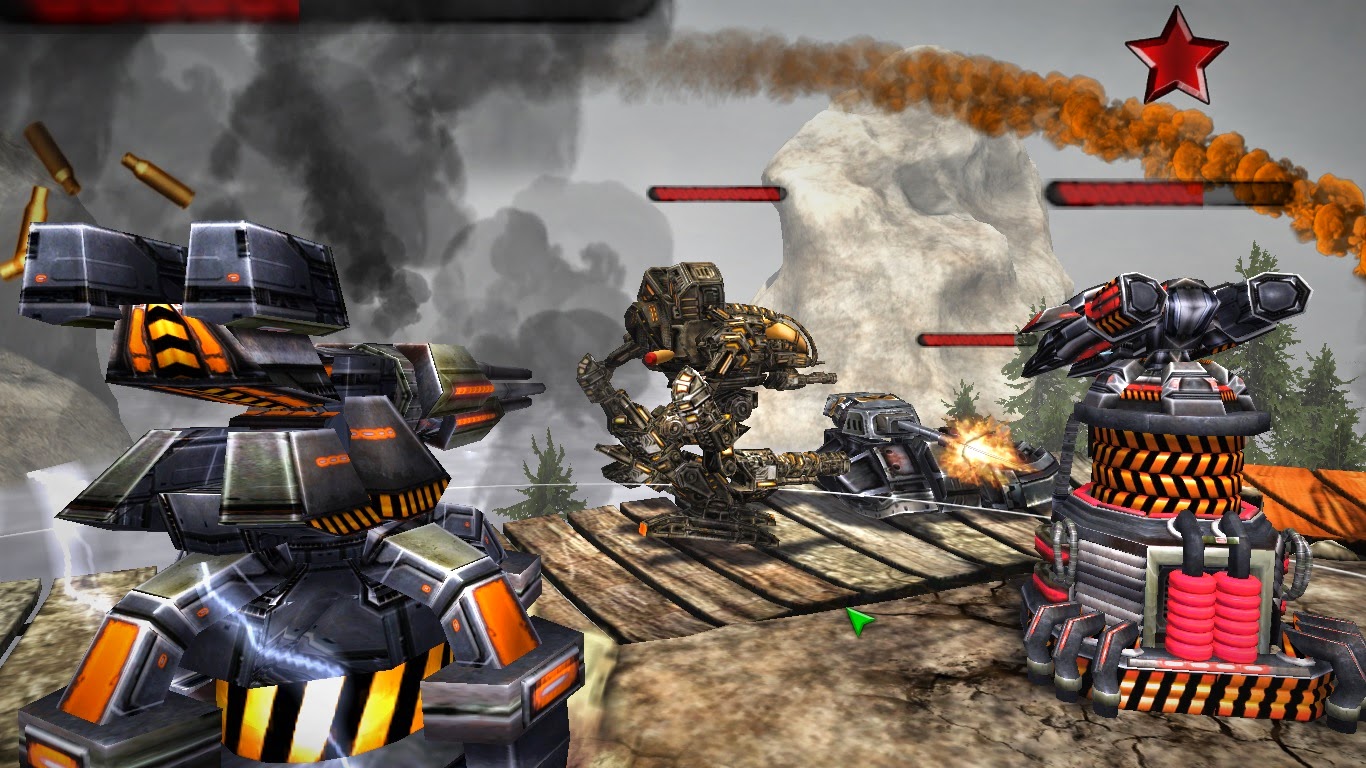 The visuals are pleasant if generally simple, with backgrounds that do not obscure the units and lack movement but provide nice detail. The towers and attackers themselves look decent if unspectacular. There is a very cool cinematic view that can be engaged that ramps up the audio and makes for a more intense viewing experience, but it makes for an impractical view for any length of time. I usually found myself zoomed about halfway out so I could see most of my troops at once, but close enough that I could at least differentiate between the units on the map.

Rush for Glory checks off a lot of boxes with multiple difficulties, several different upgradeable towers, special powers, dozens of enemy types, a slider to adjust the game speed and a cool little encyclopedia that breaks down units, weapons and powers. There is an outstanding attention to detail here that makes the experience quite entertaining while it lasts, with almost no bugs to report (except I did manage to crash the game twice, both times while I was entering a ton of commands in during a very short period of time).

For those unfamiliar with the tower defense genre, the premise is that troops will spill forth from one or two preset locations on a map, following trails that lead to a destination that you are charged with defending. Along the way, you set up towers with various abilities to try and stop those units from reaching your base. There are five basic tower types, such as the snower – which freezes enemies to slow or stun them, machine gun – which is the most versatile unit that can shoot at anything, flighters – which are meant to take down airborne units, gound lava – the opposite of flighters where they can only hit ground forces with rapid fire, and mortar – which is all about slow, powerful damage to ground units. 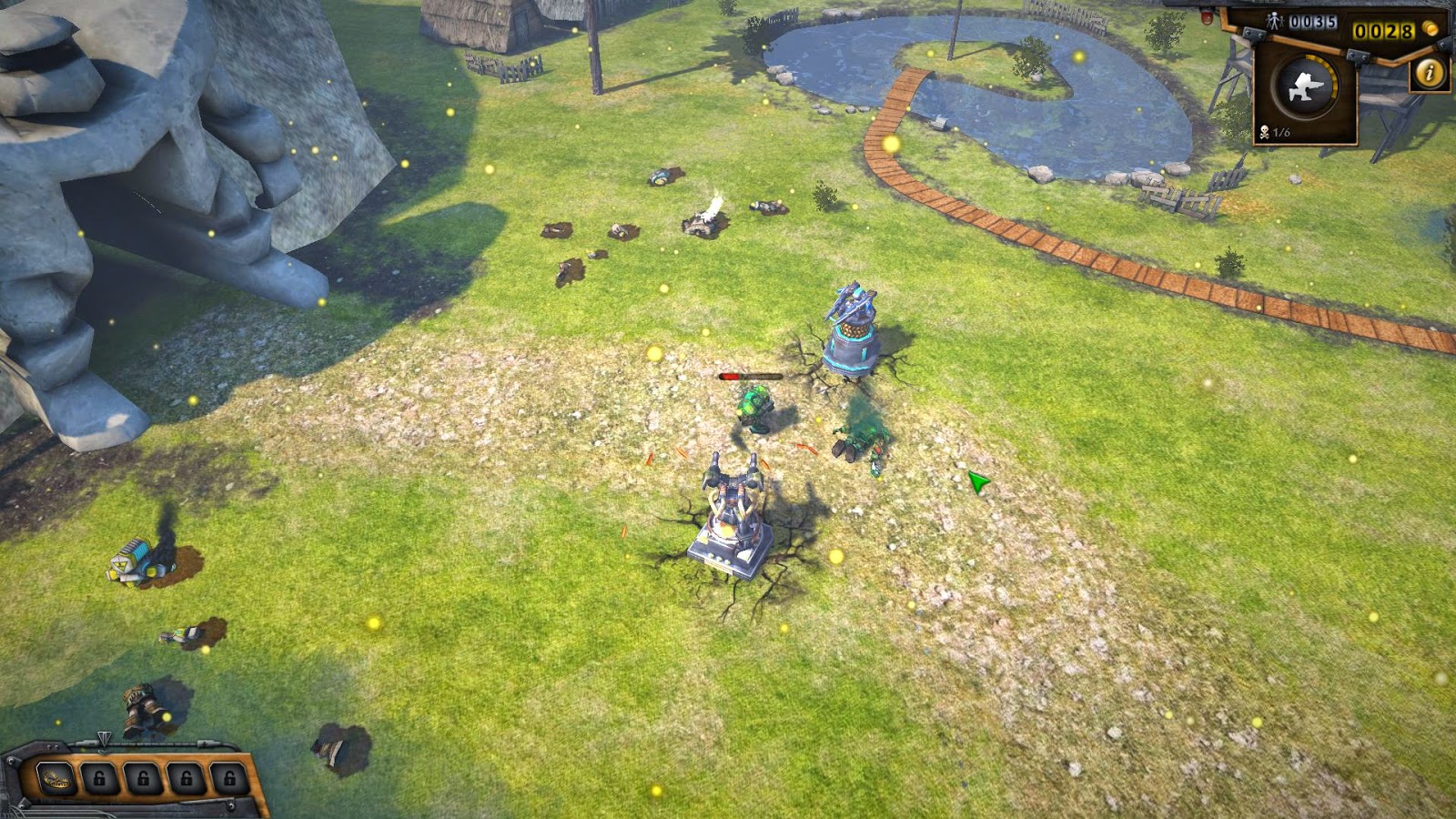 The majority of your opponents are ground troops, many of whom have different roles. In the end, you do not want any of them to reach your base, because if they do, they will lower your civilian population. However, some troops simply trudge along, others do damage to your towers, some are heavily armored or incredibly fast while others serve as healers to their comrades. The peskiest of all of the troops during my experience were of the airborne variety. Maybe there was a command I was missing, but in titles like Defense Grid you can see the flight paths that these flying units will take. In Rush for Glory the ground units are more predictable because they adhere to a path, but I found myself restarting levels several times because I had no way of knowing what path the airborne units would take, and by the time they showed up my defenses were set up all wrong.

Another area where Rush for Glory could have used just a bit more polish was in the stationing of units. Perhaps there is some sort of grid or overlay command I just could not find, but it was often difficult to know where I could place my towers. The general location was always a given – just off of the beaten paths. However, there is really no indication of how far apart the towers have to be from one another, how close they can be to the path, or for that matter how far off of the path. When you are in the process of setting towers down, you see a red circle to indicate that the tower cannot be set down, and a white circle to let you know it can be. It still often makes for imprecise layouts since you never really know just how far to space multiple towers from one another during the early stages.

Those are my nitpicks, but that is not to say Rush for Glory does not get its share of things right here. For one, I love games with a sort of persistence to them. Here your citizens carry over from one level to the next, ramping up slightly between levels but otherwise giving you this sense that early success still matters later in the game. It is very seldom a single map will do you in, but three bad ones in a row, and you could very well wind up losing the campaign. The towers also have upgradeable options that can be applied between levels. Each time you beat a map, you gain an extra upgrade point. You can dump them all into a favorite tower (in my case the machine gun), or maybe look for one or two key points of focus for each tower (like firing rate and damage) and spread it out between them. Points can be redistributed between levels as well, giving you the flexibility to try some different combinations out. 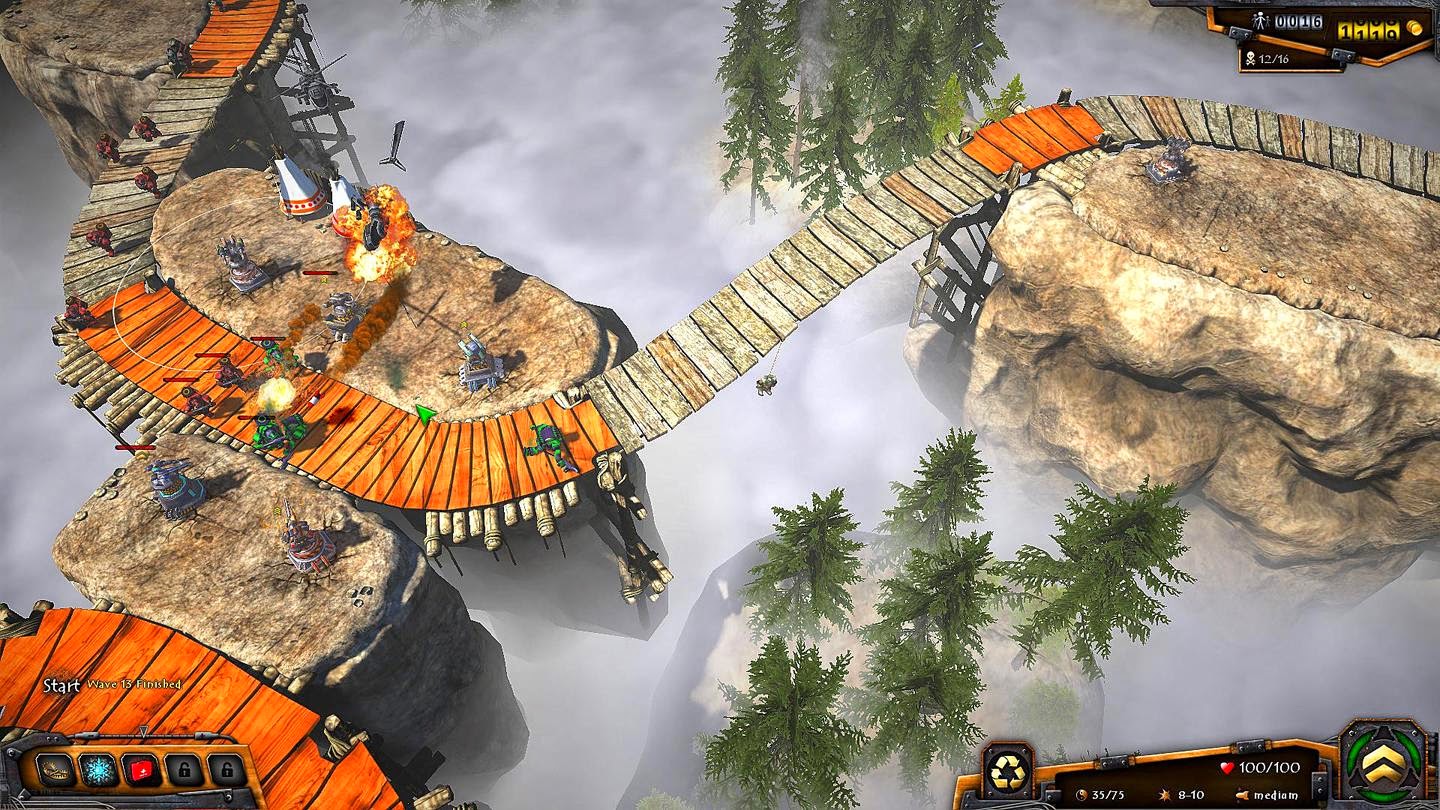 There are various super abilities that can be made use of as well throughout the levels. Each has a cost, which can detract from the money you have available to upgrade/create new towers. There is also a cooldown associated with each of the abilities. The first one simply lets you put down a mine on the road, perfect for that ‘last line of defense’ in case units get past your towers. There is a freeze command that dramatically slows down units for a few seconds, making them sitting targets. There is a repair option that immediately repairs all of your towers at once – cost and time effective to be sure. There is an airstrike command you can use to target a small section of road and basically annihilate everything in that space. Lastly there is the gold plated towers which momentarily become indestructible and also deal out more damage. Knowing when and how to use these abilities is key – especially in the later levels.

Upgrading towers is a bit different in Rush for Glory as well. Most tower defense titles simply make it about having enough money to do it, but towers earn experience for combat as well. You need to make sure that the chosen tower has enough experience to level up, and then you can pay to improve it. This also makes a tower more valuable over time, which will encourage you to make sure it stays in a state of good repair so your experience and money is not wasted if it blows up.

If there is one other complaint about Rush for Glory, it also stands as something of a compliment. The game is a lot of fun, but I do wish there was more of it. The ten levels of campaign mode go by quite quickly. My first time beating the game was accomplished in a single sitting that spanned roughly three and a half hours. I did go back through to try again on one of the two harder levels of difficulty afterward, but it would have been nice to see more levels, and then maybe more towers as well.

All in all Rush for Glory provides a solid tower defense title with fun mechanics. The game feels balanced and polished, though it could stand to have a bit more content at the end of the day. Definitely worth a play for fans of the genre, but it might leave you wishing for just a little more depth when it is all said and done.