Secret Ponchos is an interesting blend of old fashioned western shootout mixed in with a third person isometric combat system. Currently finding a match may take some time as it relies on other Early Access players on Steam, but generally the process is smooth. While Secret Ponchos does have a single player element, currently it is only there  to allow you to experiment with one of the four classes and see how they handle. The primary focus here is 2 player versus 2 player online combat. 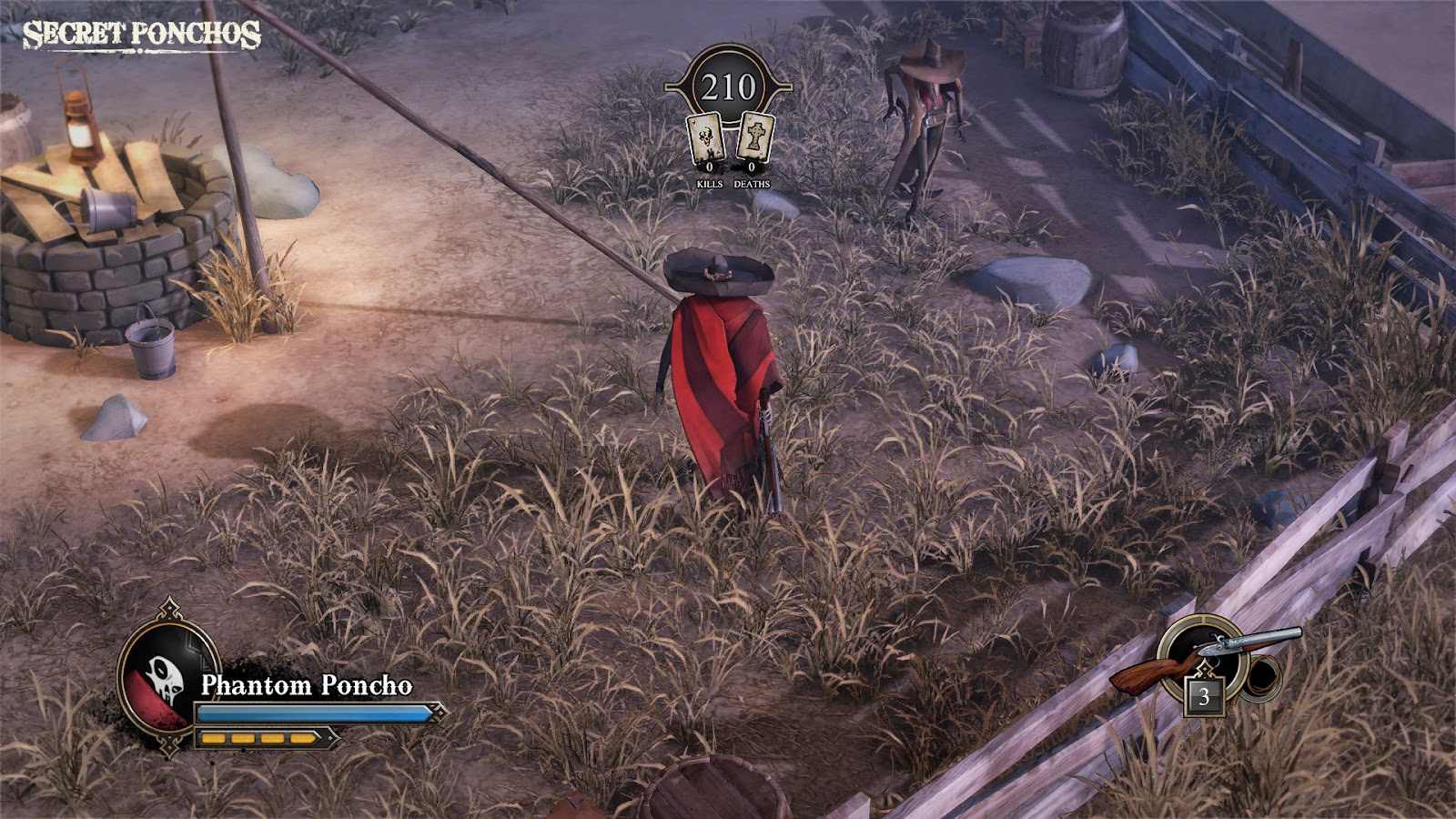 It is noted in the game information that Secret Ponchos does require a twin stick controller to play. The gameplay itself is quite smooth, but the controller? It needs to be a good one. I played with both a low quality controller and a standard Xbox 360 one that I’ve been using for years as a PC controller and the difference was astounding. Make sure that you have a good controller with very responsive joysticks or there is a good chance you will be eating lots of sand. Dual Shock 4 controllers are also mentioned as acceptable controllers to be used.

Secret Ponchos currently contains four different characters each with their own specialties and secondary skills. I won’t say weapons as while one has a knife, one as a whip, the other has dynamite, the last of the four has a health pack. During character creation all characters have their possible max stats listed and starting off you are allowed to place two stat point wherever you want. Stats fall into the following categories and it can show when a character has been leveled up. Damage, Fire Rate, Stamina, Range, Speed, and Health all affect how your character handles as they move around. It is always a good idea to try out all the classes as there will definitely be one or two classes that their play styles appeal more to you than another.

Reaching the next level is based upon several different elements, but the primary one is your Kill to Death Ratio followed by how much damage you either dealt or took. This can be a slow process, as I’ve been close to the next level, but fallen just short. Like all games against other players, I’ve had good and bad matches… even super terrible matches such as the other team forcing a start making it 2v1. I can honestly say, unless you’ve mastered the class, winning a 2v1 match is not going to happen. Reaching the next level is cumilative as a bad score will bring you back down and further away. Several of these in a row and there will be a lot of catching up to do. That being said, Secret Ponchos is still fun and definitely drives a competitive spirit, but the progression can be slow and a bit frustrating. 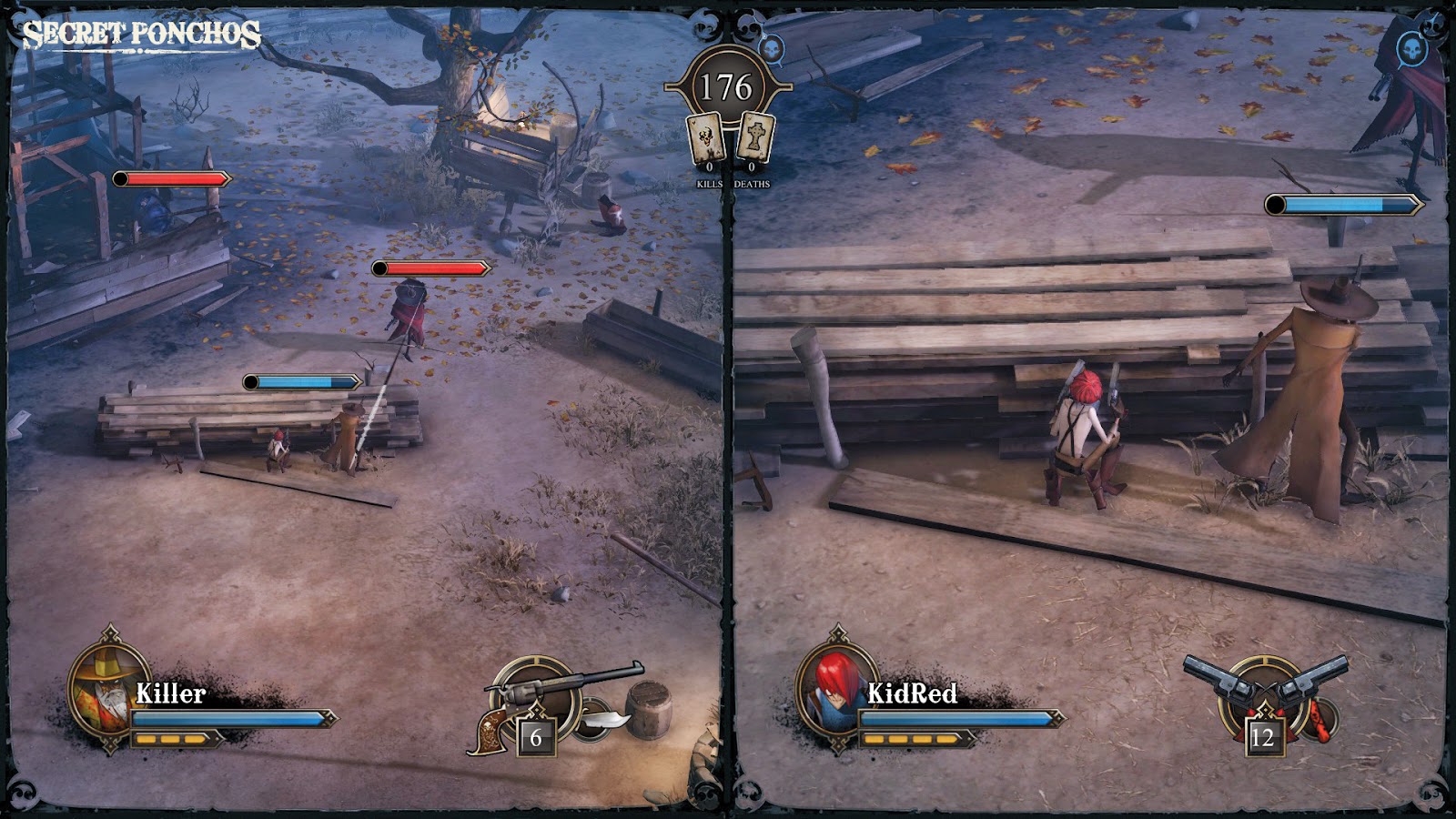 Currently there is only one competitive mode available, and it comes in the form of a 2 on 2 deathmatch with more modes to come in the future. From what I have seen so far, things look promising as each character handles quite differently from one another, requiring a different set of tactics to fully utilize their skills. Characters can shoot, reload, switch to their secondaries, and dodge as long as there is still enough stamina left to do so. Once a player dies, there is a countdown spanning a few seconds before respawning at a designated point. Unfortunately this can sometimes spawn you right beside the enemy who may have also just respawned. Other than a quick second of panic washes over you, both players will open fire at one another and the loser respawns in another location.

Matches currently have a timer which dictates the length of a game. If one team can get a total of five kills in a row on the other team the match is over regardless. If the five kills in a row is not accomplished within the time span then a second, and / or a third round may be required. Sometimes a match can take no more than a thirty seconds, while other in more evenly matched instances the battle can find itself being waged over several rounds. Whether this is a long running match or one that ends quickly, the combat is quick and frantic and it keeps things interesting.

Secret Ponchos is a very well-designed multiplayer experience that has a solid foundation that I am anxiously waiting to see expanded upon. The premise of a wild west shootout through a third person isometric view that brings something unique to the table. Now, if you excuse me, I am gong back to hunting down my enemies while I may or may not be playing Queen’s Another One Bites the Dust in the background. 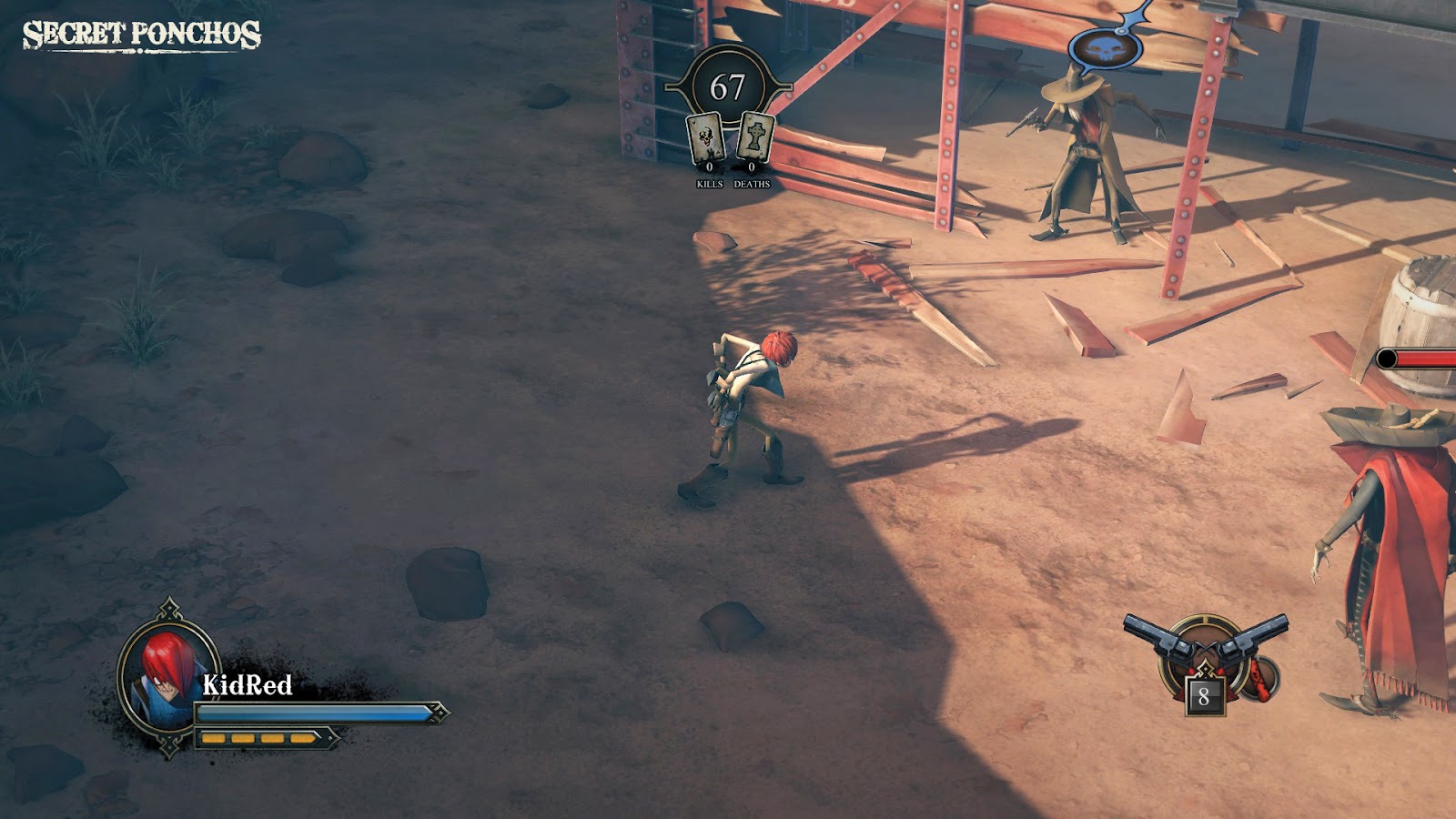