I am at a loss for words. When the SteelSeries Sensei Wireless Mouse showed up on my desk one day I was overjoyed at the prospect of reviewing this device; I literally jumped up and down in my desk chair. I have, like most PC gamers that build their own gaming rigs, spent hours upon hours agonizing over the cost of parts, whether something is “just good enough” or if it was something that really should be invested in. Sadly, the mouse is one of the most over-looked peripherals on a computer, likely due to the really low cost of some of the budget devices out there. However, SteelSeries knows that the mouse is one of the most integral pieces of a PC gamer’s repertoire and the Sensei Wireless mouse is the result of their tournament-grade performance history (with the wired Sensei mouse) being paired with some of the best wireless technology out there. The big questions are whether the wireless technology is a hindrance or not and whether or not it is ‘worth it.’

The short answer is: Yes, the Sensei Wireless Mouse is worth it and so much more. 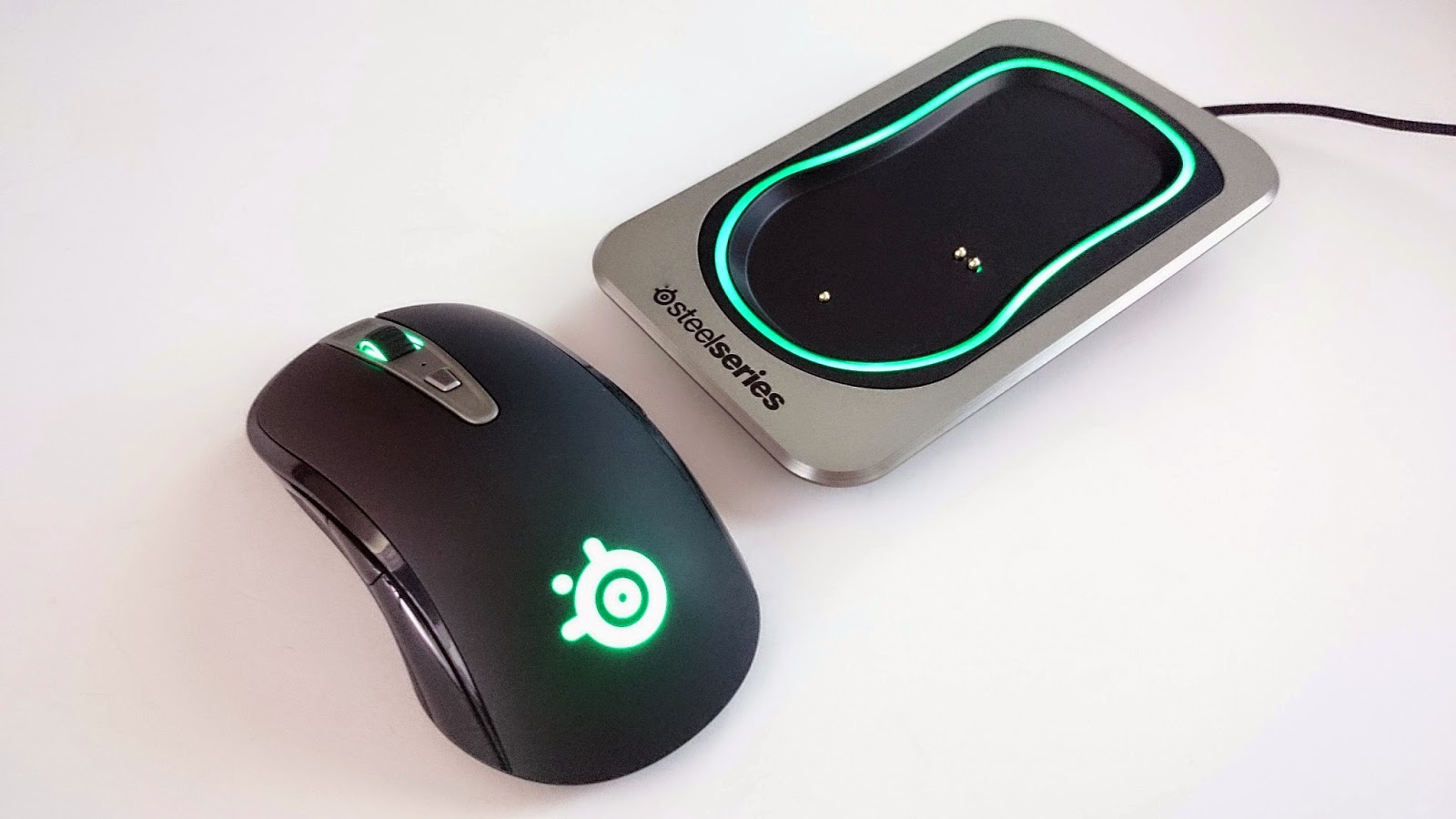 A lot of gamers may buckle at the steep price tag that is associated with the Sensei Wireless mouse. That being said, this is not a device that is design, developed, and marketed to “most gamers.” This is a professional-grade tournament mouse that fits into you palm like your favorite pair of doeskin gloves and glides along your gaming surface the same way a super exotic sports car glides across the track. The Sensei Wireless mouse is to computer mice what the Bugatti Veyron is to your average grocery-getter; simply put, it is in a class all in its own. While the mouse is a wireless mouse it does come with a mini-USB to USB cable that will actually plug into both the mouse and the computer to turn your once-wireless mouse into a wired mouse (very neat) so that while it charges (also, very neat) you can still smite your foes in DOTA 2 or another round of CounterStrike: GO.

Before I go all bonkers here and just gush about how this mouse is pretty much the greatest thing that has happened to home computer since the first personal computer was offered on the Home Shopping Network, I will try to break this review into a bit more of a structured review.

The Sensei Wireless Mouse by SteelSeries is packed into a very professional and compact box that has a sturdy, no-crush feel to it. If the packaging is any indication of quality, then this mouse is already a top-contender for Best Gaming Mouse, as the packaging is so efficient yet organized that even Ikea should take note for how well it is packaged. Once you get through the tape and examine the contents of the box you will see that there is no much there. You have your wireless mouse, your base, a few quickstart guides, and a USB cable. You will notice that the mouse itself is extremely lightweight where the base weighs a good four or five times as much, which is fine, the base is not the piece you will be moving around. Even the USB cable is braided and has a sturdy yet flexible texture to it! Every ounce of the packaging and the Sensei Wireless oozes quality. 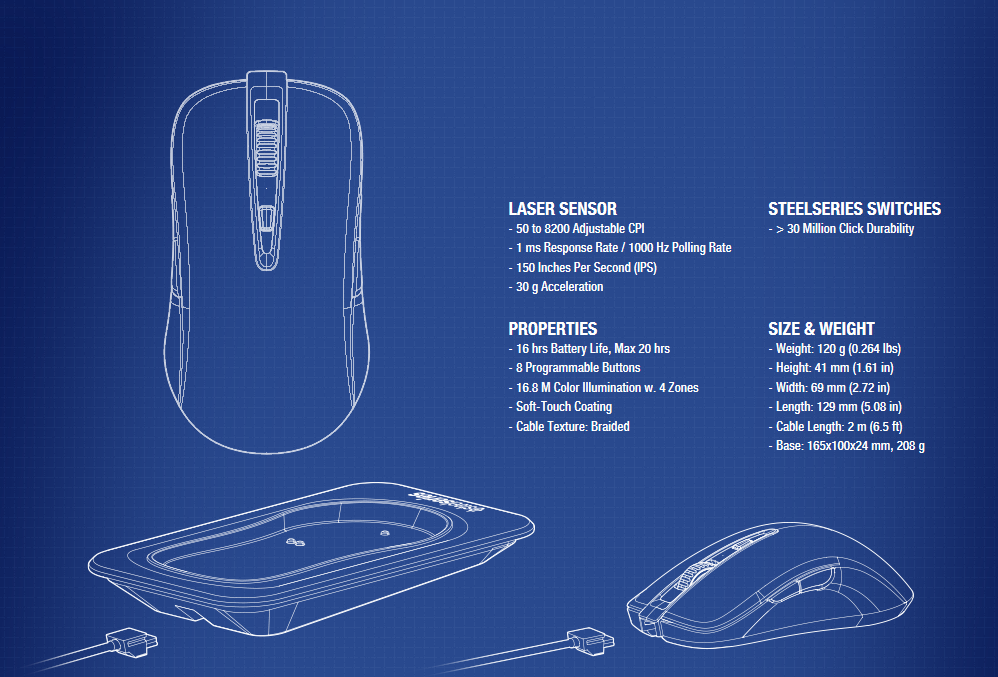 Aesthetically the Sensei Wireless mouse is sleek with a muted, matte charcoal body with a thin piano-black border and a silver strip surrounding the mouse wheel; the base is a matte silver and the unit is very thin overall, maybe a half-inch at it’s thickest point, with a recess where you place the mouse for charging. I know it is a bit of a gimmick, but I found that one of the neatest features of the SteelSeries Engine 3 ( the software that comes with the mouse and acts as the configuration utility ) was the ability to change the lighting on both the mouse and the base. Currently I have one of the lights on the mouse, the one in the mouse wheel, blinking rapidly in white. The SteelSeries logo on the palm-rest of the mouse is a methodical blinking at a nice and easy pace in the brightest yellow I could get, and the base is a slow, rhythmic blinking (they call it ‘breathe’) in a bright blue.

Crazy colors, yeah I know, and some of you may be thinking that having your mouse and mouse base lighting up and/or blinking is annoying, but SteelSeries has designed the lighting in the mouse to be as unobtrusive as possible while still giving it some flair. Beyond just looking like a really high quality device, the mouse feels equally high in with its silky-smooth touch and its almost non-existent weight. After a number of hours playing games such as Team Fortress 2 and Hard Reset then slowing down the pace a bit and playing some Distant Worlds: Universe and Anno 2070, the lightweight mouse left me with no wrist-related stiffness or fatigue. I was truly impressed with the way my hand simply cupped the mouse and how responsive the mouse buttons were. Even in click-happy games like Torchlight II and Diablo III I the mouse had no issues responding to the crazy number of clicks.

For being a wireless device the battery life is fantastic. When I received the mouse I immediately set it up and let it charge and after about 40 minutes the battery was fully charged (I am not entirely sure where the battery was at after being shipped). From then I managed to get about 7 hours worth of pretty intense, non-stop gaming in before I had to call it a night. When I opened up the SteelSeries Engine 3 software and took a look at the battery, I was quite pleased to see that I still had about 4/5 of the battery left. All-in-all I am quite pleased with the lasting power of the Sensei Wireless, especially when comparing it to either my Logitech M510 or my Microsoft Ergonomic Wireless Laser Mouse 7000 as it lasts significantly longer than either of those two devices.

One of the greatest features of the mouse is the insane resolution of the 8200 CPI (counts per inch). Personally I have no idea who would use such a high CPI, but they certainly have that option with the Sensei Wireless. The SteelSeries Engine 3 software allows you to configure each of the buttons to do any number of tasks, from assigning keyboard keystrokes to the mouse button to creating your own macros (excellent for playing MMORPGs); though I found that the real bread winner of the software was the ability to save different layouts and then save those layouts to particular games that you have on the machine. When you create said layout for a game such as Guild Wars 2, when you start the game that layout will automatically load; let’s say you are done playing GW2 for a bit and want to get into some crazy FPS fun and you load up Left 4 Dead 2, the SteelSeries Engine 3 will unload the Guild Wars 2 profile and load your Left 4 Dead 2 profile.

No messing around with different settings every time you start a new game; simply set it up once and save the profile and you are done. I found that in most of my more action oriented gaming, that I had my CPI set to the 5600 setting and for my strategy or simulation games, like Endless Space and Cities XL that I would keep the CPI nice and low at 1600. I tried playing a little Quake Live with the CPI set to the maximum and it was a relatively crazy affair. Simply breathing on the mouse would cause me to spin uncontrollably. I am sure there are twitch-gamers out there that would love it but such a high setting is not my cup of tea.

With such an attractive mouse that has an amazing array of customizable buttons, the Sensei Wireless Mouse by SteelSeries is seriously in a league of its own. The very finish and feel of the mouse exudes quality and substance, which is then backed by a strong software suite that is laden with rich, customizable features. While it is certainly an expensive mouse, the Sensei Wireless is worth every penny and any serious gamer who is looking for the best quality, the most reliable brand, and a device that has perhaps one of the greatest companion apps out there (I cannot say enough good things about the SteelSeries Engine 3).