Pool is one of those games that is sort of like chess for me. I thoroughly enjoy it, have been playing it on and off for years, yet I am probably only average at best. It is a bit ironic that the makers of Pure Chess – a game that I love and yet am not particularly great at, has come out with a new game called Pure Pool. It sure looks, sounds and feels the part – right down to reminding me that while I enjoy the game, I am not by any stretch of the imagination great at it. 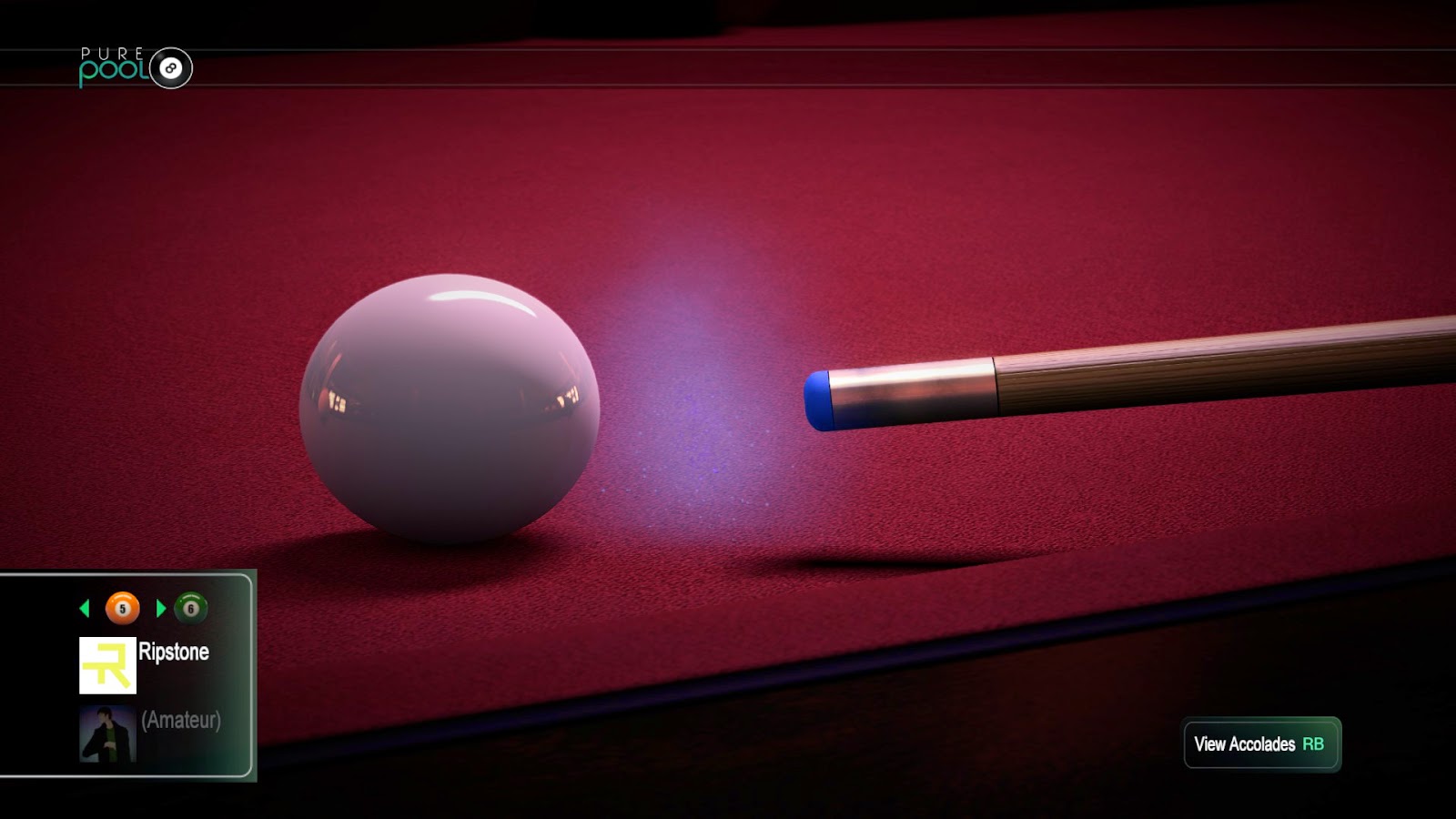 I like Pure Chess quite a bit, having logged a lot of time now playing matches with primarily my father, but other people (both random and friends who own it) as well. It is a slower paced, tactical game that looks beautiful on the PlayStations 3 and 4. Of course, there is not an abundance of movement, you are not dealing with crazy background animations or zany particle effects, but at the end of the day the board and pieces had a nice clean realistic appearance to them that I could appreciate.

Pure Pool made that exact same kind of impression on me when we took a peek at it in the past, and those visuals have turned out even better live and in action. As soon as the game starts and teaches you the basics, there is a soft background and some gentle, easy music to help set the tone and gives you the feeling that the games are being played in some kind of a small, quiet club in the background. However, all of that really is in the background – something that sort of fades away and lets you focus on the game at hand.

The physics of the balls gently rolling around the table, or striking hard off of the edges all feels very good. The ability to put spin on the ball is easy enough to do, but mastering how the balls will react takes a lot of practice. This is still a game that is all about the angles, and by and large it feels very true to life. One feature that has been in pool games just about as long as I can remember are what I call ‘impact lines’. Basically they show where your shot will go, but also give you an indication of what will happen when the balls connect. 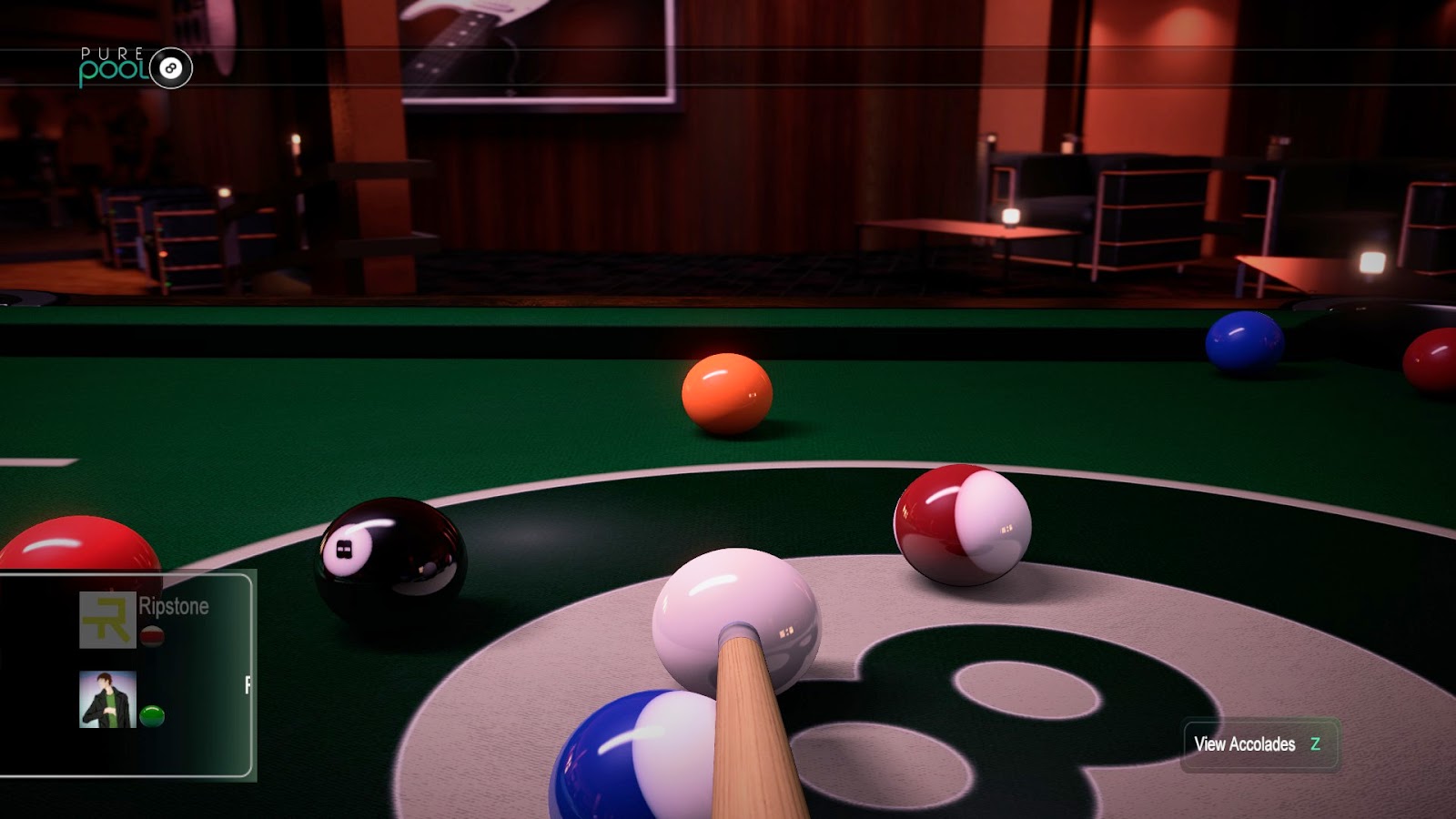 What is really cool about Pure Pool’s approach is that the yellow line (indicating the direction of the ball that is being struck by your cue ball) is fairly narrow when the shot is easy. Going for a pocket shot at a roughly thirty degree angle? The yellow impact line is very reliable. However, trying a glancing shot, with the ball near the table’s edge? That yellow line looks more like a cone as it fans out, making it much harder to predict where the shot will land. Early on I was using the impact lines a good deal more than I am now, which is a small point of contention in online matches, since some people may be using them and others might not be. So far as I can tell, there is not a way to filter games out by that. Thankfully the online modes are all quick, smooth and headache free, but I spent the majority of my time in the single player mode.

In these modes, you are setting up to play 8-ball and 9-ball tournaments or simply participating in challenges that test your ability to sink a certain number of shots in a row, or to pocket as many balls as possible in a short period of time. One version of the game involving ‘lives’ – a miss costs you a life and the first one to run out of lives first is done – was unexpected and very cool as I had never heard of that game variant before. 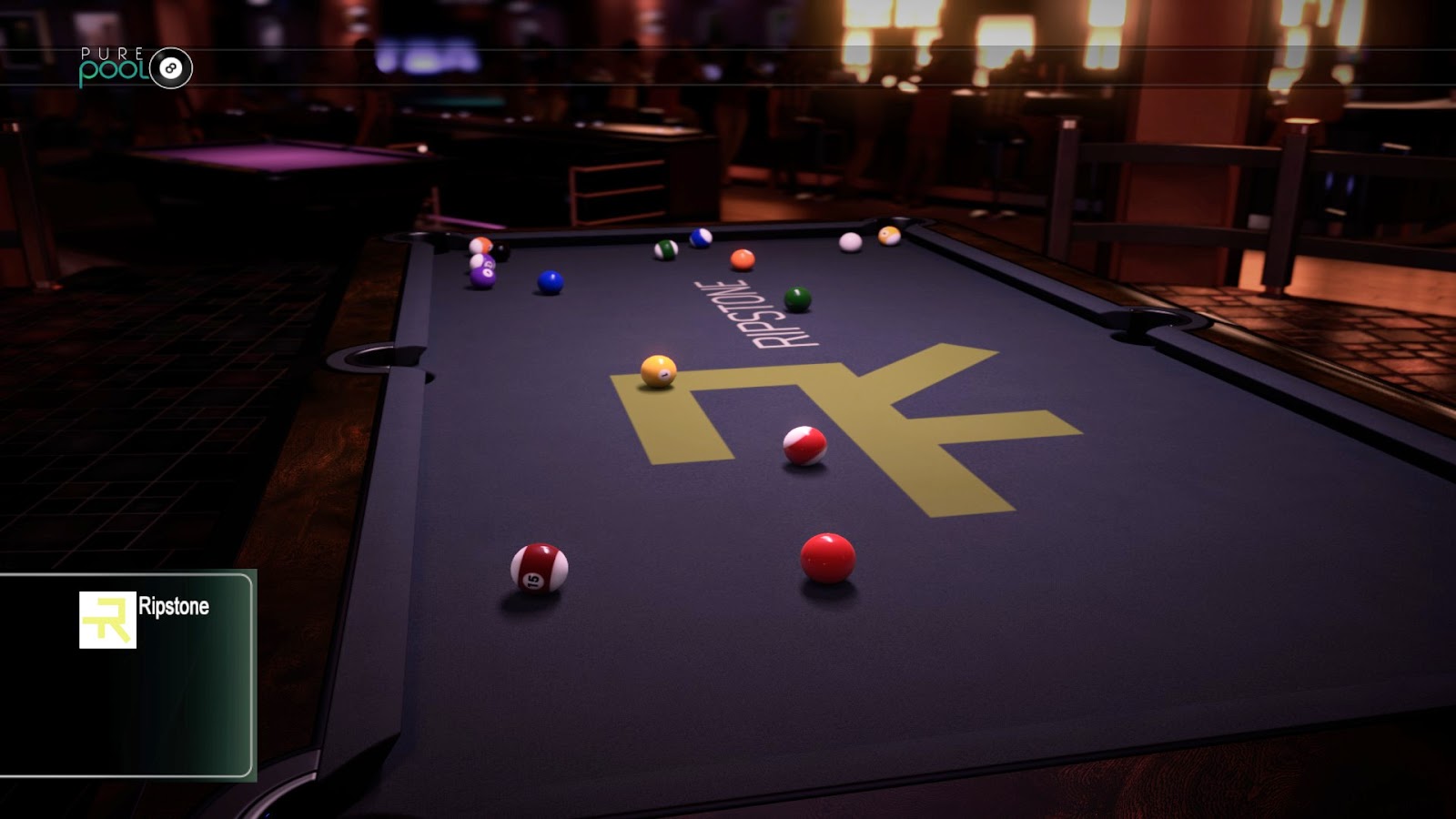 An AI opponent would have the potential to really frustrate, but thankfully they play reasonable to their predetermined skill levels. Even amateur computer opponents can get on hot streaks, but more often than not they will leave shots on the table they should have made or even hand you an accidental win by knocking the 8-ball in prematurely. Meanwhile, higher levels of difficulty are completely capable of putting perfect spin on a ball that banks off of the side and knocks its target into a corner pocket. Crazy fun to watch, frustrating when you realize you have a long ways to go before being able to pull off a crazy shot like that.

This career mode allows you to unlock new pool cues, gain experience and to gather accolades for your profile. All nifty little features that help to make this the most authentic video game of pool I have played yet (which is worlds of improvement over something like Inferno Pool). The ability to apply a handful of different table designs help to keep the aesthetics fresh and the gradual increase in challenge from the AI opponents makes this an easy game to recommend for pool enthusiasts of all skill.