Codemasters has promised an update not just to the graphics of the F1 series, but also how it sounds. 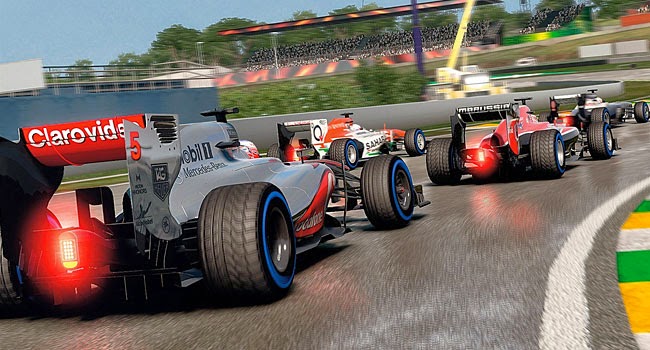 Codemasters® released the first hot lap video for F1 2014. The hot lap is the first chance for fans to hear how this year’s radically different turbocharged cars are brought to life in the game, including the distinctive deeper growl produced by this year’s new power units.

The 2014 FORMULA 1 GULF AIR BAHRAIN GRAND PRIX was run as a night race for the first time this year, and the hot lap video shows Fernando Alonso’s Ferrari taking on the 15 corner, 10 year-old Bahrain International Circuit dramatically lit up by hundreds of floodlights and against a striking backdrop of fireworks.

Featuring all of the circuits from the 2014 calendar, Bahrain’s debut as a night race, featuring its full day / night transition, is just one of the circuit changes for this year’s game, alongside the return of the Hockenheimring and the debut of two new circuits – Russia’s Sochi Autodrom and Austria’s Spielberg circuit.

And here is the new trailer: