Whispering Willows is an interesting take on what feels like it could have been a Point and Click Adventure. Instead of using a mouse, it instead requires moving left and right from one end of the screen to the other manually instead of pointing and clicking in order to examine the various locations. This makes the requirement of actually moving across the screen much more necessary compared to a Point and Click, as by exploring each area from one end to the other will uncover things that might not have otherwise been seen if just scrolling by with a mouse. 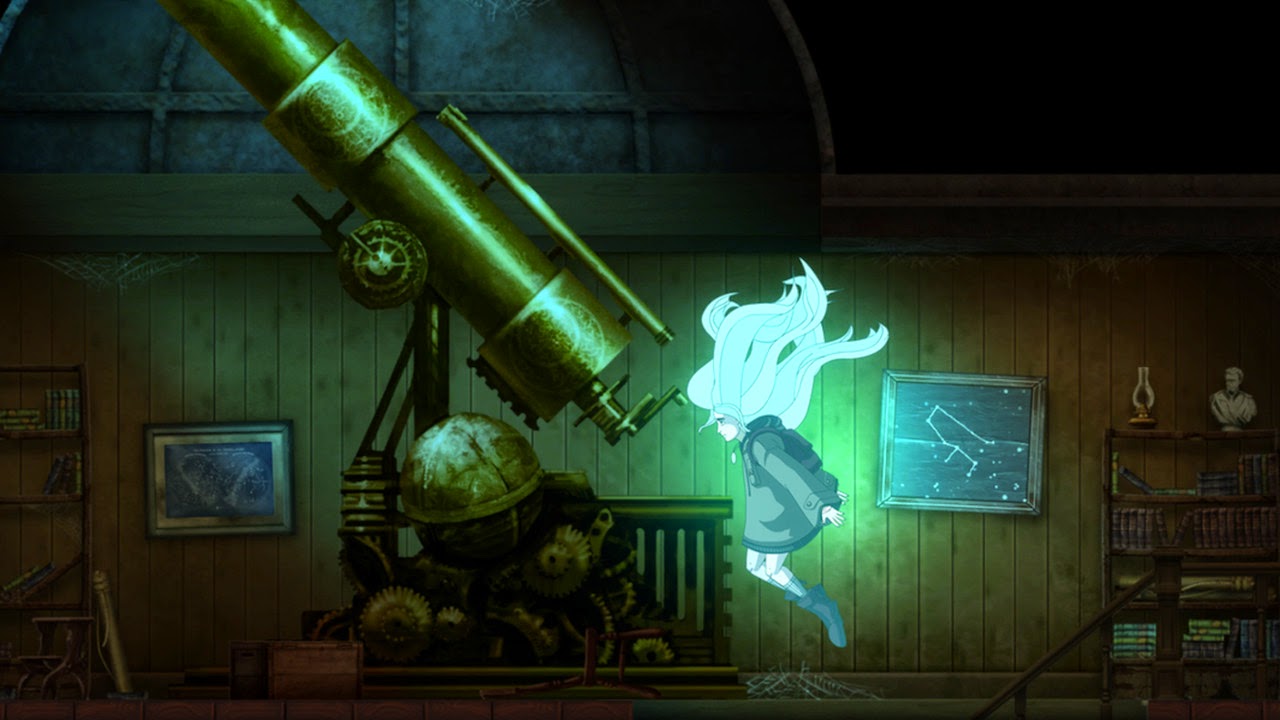 The past year had been an interesting time for me. I’ve gotten to play
games that I may not have otherwise touched, had I not joined some
amazing teams of people in their quests to bring others reviews,
previews, and news articles. Prior to this new beginning of mine, I had
not even touched a point and click. Now I’ve had the pleasure to play
various styles and Whispering Willows is definitely among the better of
these.

Utilizing this style of movement mechanics for exploration ties very well into the overall horror ghost story theme. Not only does every room or hallway within the haunted mansion’s grounds have to be explored step by step, but it is also done very slowly as Elena cautiously searches these grounds, in the middle of the night… and mostly in the dark… for her missing father that tended the grounds. The haunting looks of the mansion and its grounds are aided by the beautiful crisp artwork that are presented in both the mortal and spirits realms which more than helps show off the details of the environments. Add these to the chilling soft music in the background, and the recipe for an incredible ghost story is just about complete. 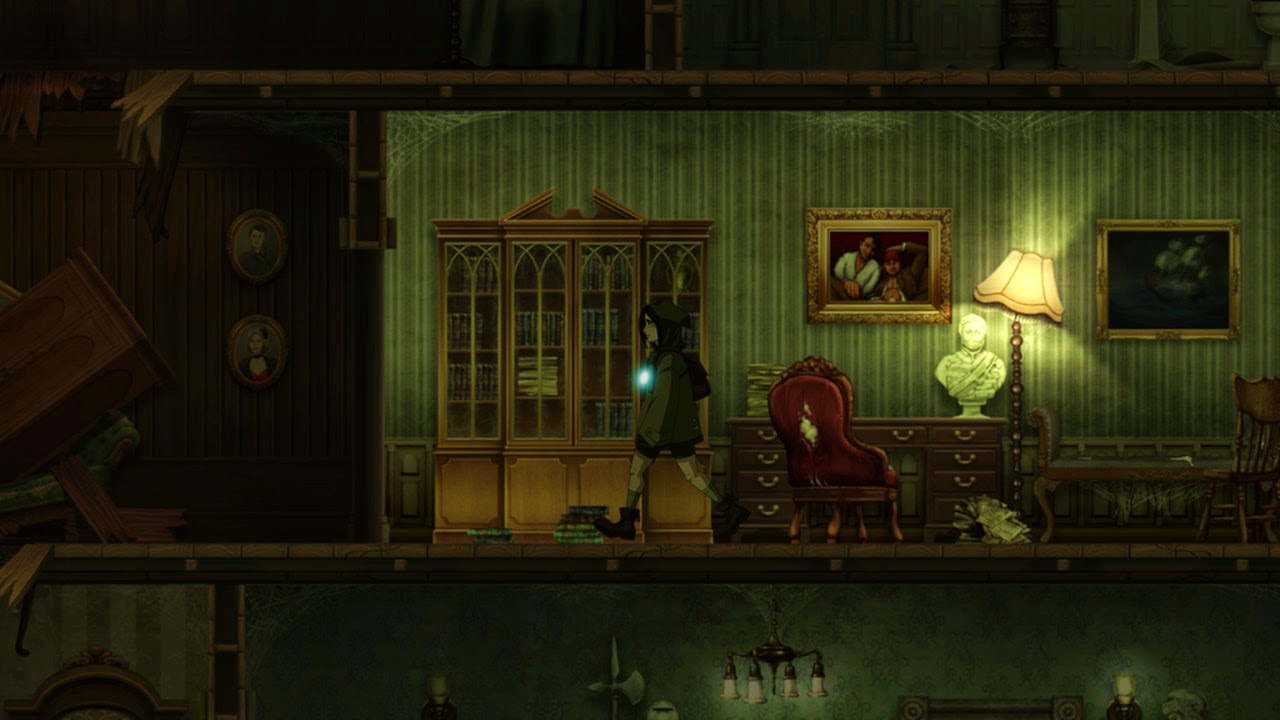 Starting off Whispering Willows felt slow as Elena doesn’t move overly fast. Each room or hallway felt painfully slow until I actually started to look at the floors and the walls. Was that blood? Why is that broken…? Are… those claw marks? As things truly start off and more and more rooms are seen, the creepy atmosphere starts to settle in and you might not want to move much faster than you already do. The further you go, the more a feeling of something bad is going to happen settles in. This is truly reinforced when a nightmarish being appears and starts to give chase as you need to unlock doors that stand between you and the exit. You had better run, because there can be some very scary things in the dark that you don’t want getting a hold of you. Especially when it is haunted by malevolent spirits.

The story is told in an interesting fashion that also utilizes one of its game mechanics quite well to tell it. Not only does Elena need to move Left and Right slowly through each room to explore for tools or keys, but parchments can be found scattered throughout the various locations from the mansion proper, to the various other sections such as catacombs and the guest house. These pieces of paper tell of past events such as the founding of the town that rose around this once luxurious locale. These events, depending upon the person telling them, get darker and darker as Elena discovers that the history told in the schools is far from the truth. Best part of a ghost story is that nothing is what it seems as the truth is much much darker. Along with the various parchments, it just happens that you’re descendant of a line of shamans that allows your spirit to leave your body to fit into smaller spots and talk to ghosts. The ability to talk to ghosts has other perks that come along for the ride. Want to fly around and explore places you can’t walk to? Go for it. Want to open a door but can’t because there’s a dresser in the way? Possess it. 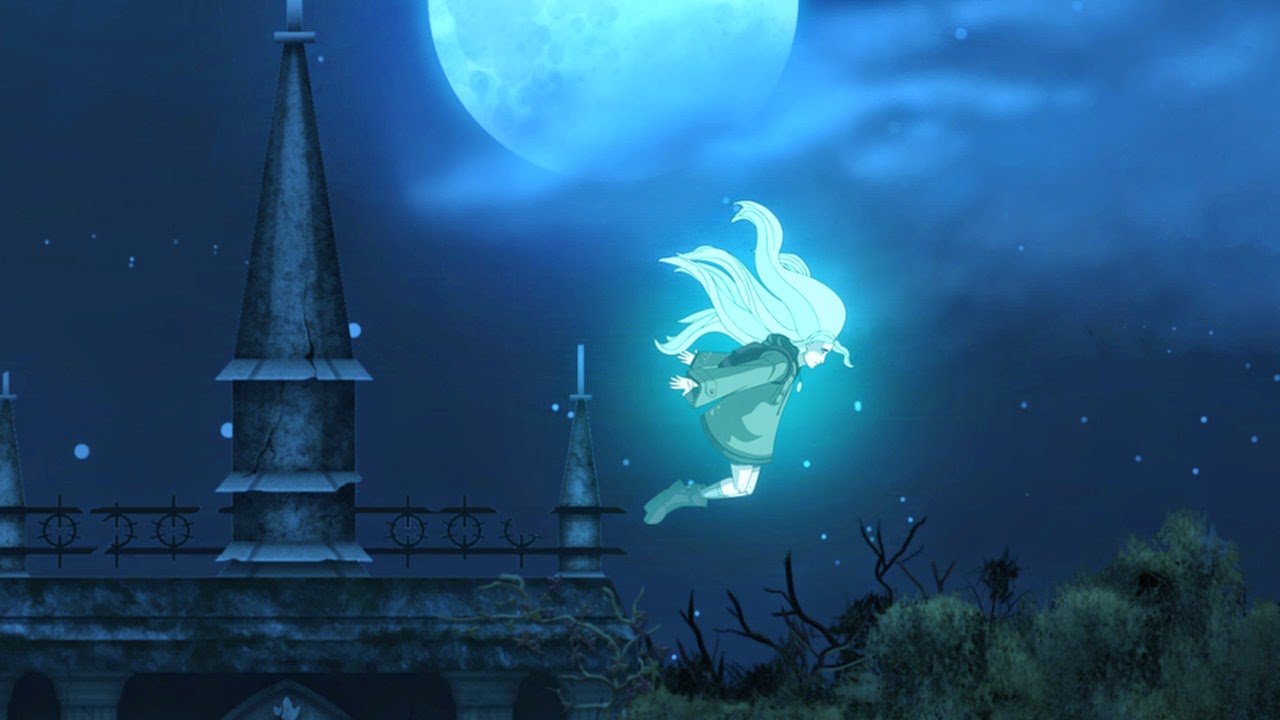 As Elena moves around, the pendant around her neck will glow different colors depending upon which types of spirits are present. These spirits can either be helpful or harmful to you depending upon the glowing color of the pendant. Paying attention to the color, and to the pendant itself is rather important. The color of the pendant can also really let you know when is a really good time to be able to take your spirits out of your mortal shell. This comes in handy often enough, but, when you’re being chased by something and you’ve got to leave your body to possess a switch to open a door? It can start to get intense as the feeling of impending doom can be very hard to shake as the monster is running down the hall while you are slowly floating through cracks in the wall to make it through to that switch.

Whispering Willows is an incredible game that honestly kept me up the first night after playing it. With the story telling through parchment letters and ghost ramblings, everything comes together in a beautiful yet haunting manner of excellence.