I mentioned this when I first previewed Meridian: New World; I love real-time strategy games. As PC gaming grew, the real-time strategy and roleplaying genres were the genres to play. If you were not a part of the Command & Conquer, Warcraft: Orcs and Humans, Advanced D&D (Champions of Krynn!), or Elder Scrolls games then you were pretty much a square and did not deserve to play video games. I grew quite attached to the Warcraft and StarCraft brands as time wore on and primarily stuck to Blizzard’s core RTS games. I did branch out a bit with Dark Reign, Earth 2140, then fast forward ten-plus years and got into Warhammer 40k: Dawn of War and Company of Heroes, largely though I stuck to the Warcraft franchise though, admittedly, I picked up StarCraft II: Wings of Liberty on day one. Outside of a handful of titles, there are not many “true” real-time strategy games available. 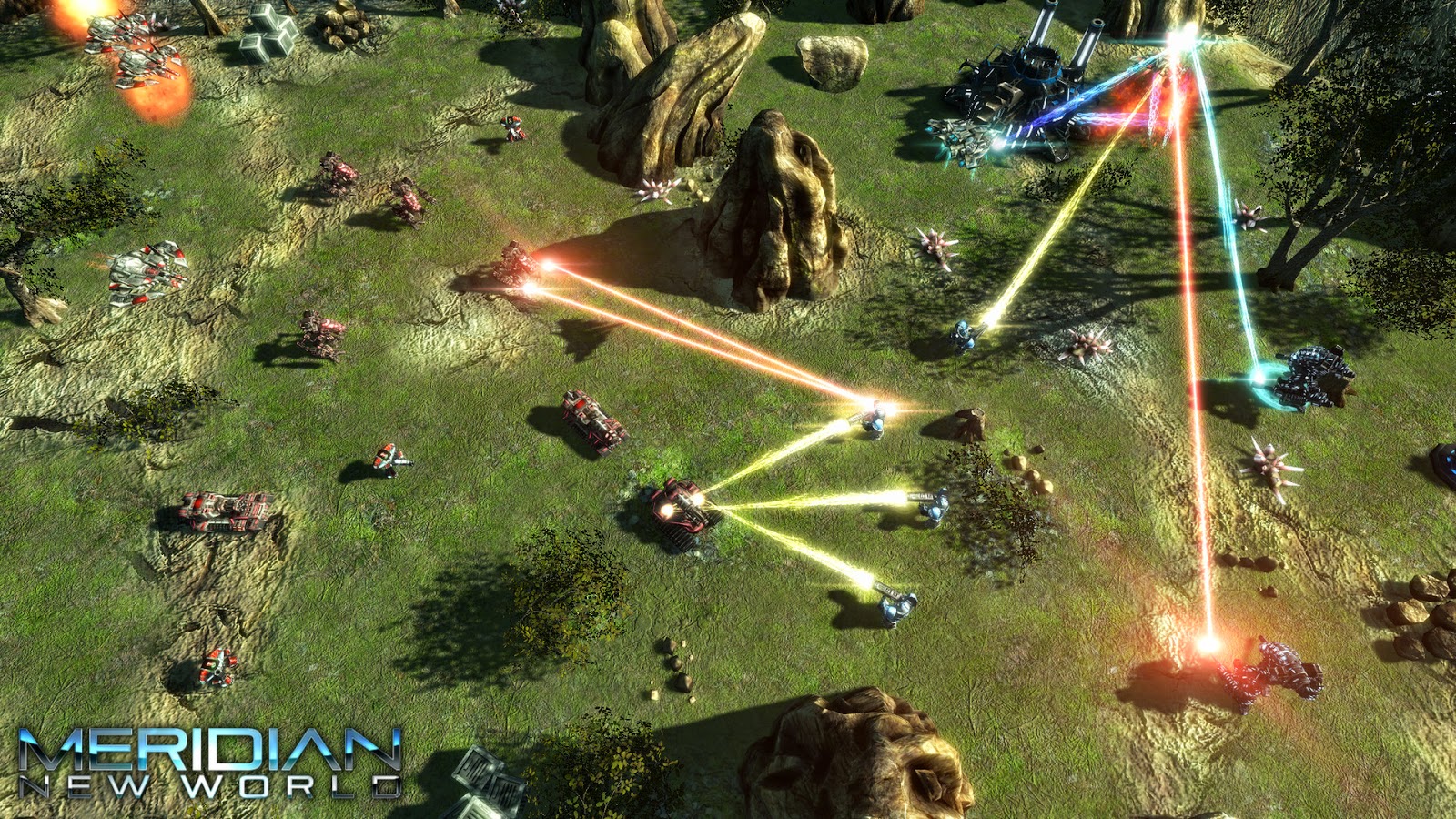 I am not sure if it is more because developers fear being swept under the rug by the behemoths like StarCraft, Command & Conquer, or Company of Heroes, or if the general demand for true real-time strategy games has just disappeared. Whatever the case may be I squealed with delight when I head about Meridian: New World. Here was one determined solo developer who was working to breathe life back into a relatively stale genre. Failing that, they were looking to simply provide gamers with a real-time strategy game that is a throwback to the classics. Now that six months or so has gone by and Meridian has now officially launched, the question remains: was Meridian: New World worth the wait?

As I mentioned back in April when I previewed Meridian: New World, the early access was very complete. A lot, if not all of the features were in-game and available for use; from the RPG-like elements to the different ways to customize your units, Meridian pretty much had it all. I did notice that graphically the game has gotten a little more optimized as it ran better this time around on the same machine that I previewed it on. I had previously been at about 20-30 FPS during heavy action sequences and this time around I never dropped below 30 FPS regardless of what was on-screen. Trees and other environmental doodads are cleaner and have clearer shadows and the textures of the environments just seem higher and with more depth to them. 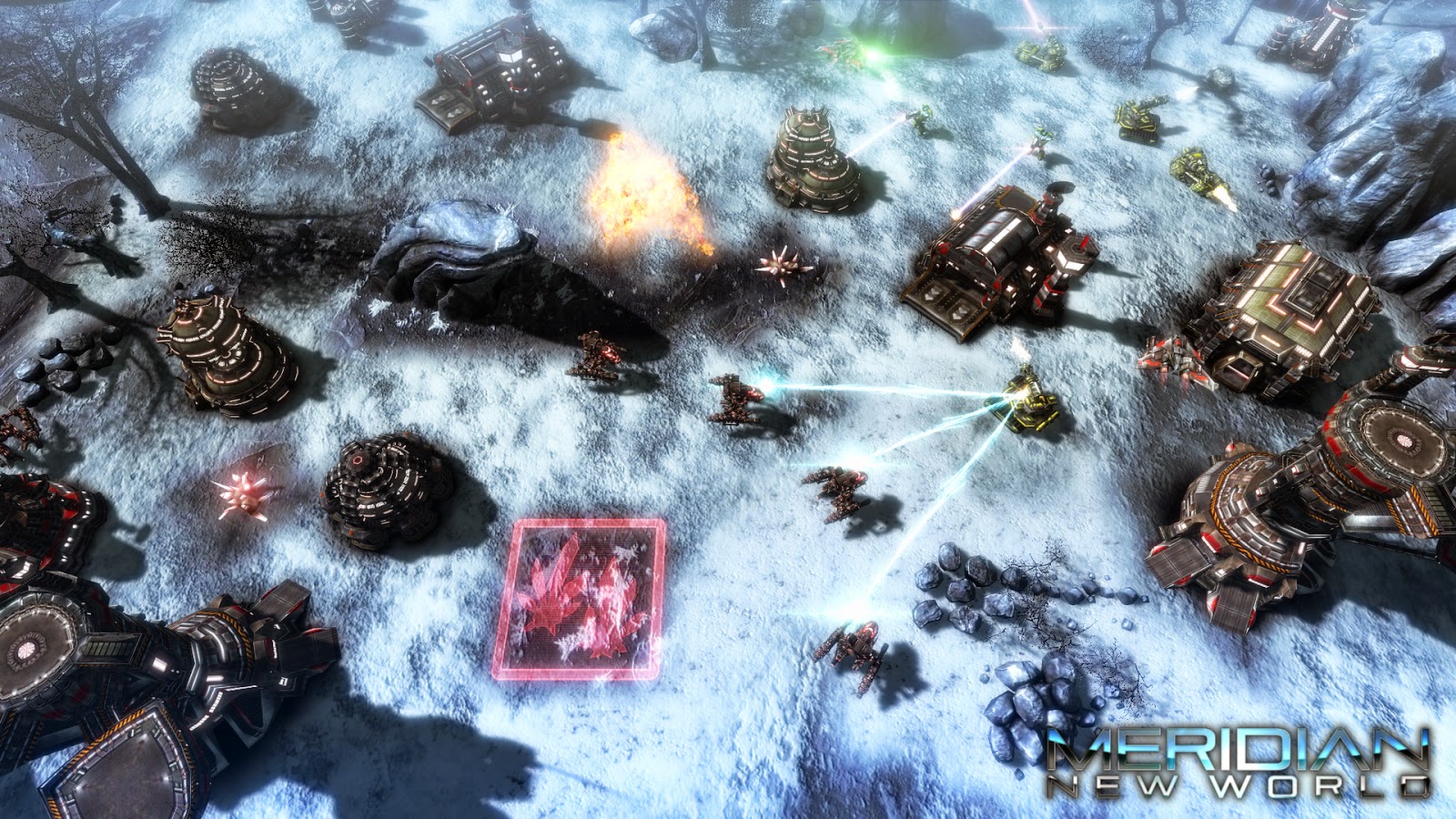 One thing I cannot be 100% sure of but it seems like units have gotten a small increase in scale as the Chimeras seem a little larger and the marines seem a little smaller, but that could just be my eyes playing tricks on me; regardless it was a welcome observation. Unit occlusion is done in a manner similar to StarCraft II where the foreground item becomes slightly transparent and you can see your units just fine, which is a bonus since some of the maps have varying heights that could make things very difficult to work with. One thing I did notice this time around is the lighting; while excellent the “sun” and lighting effects of Meridian seem very harsh, as if the contrast was high and it gives a very alien atmosphere to this game about colonizing a Goldilocks planet.

The biggest change that I found between the preview and release versions, outside of many technical bug fixes, would lie in the audio. Where the preview title had some voice acting, the release version is full of voice acting. The best part? The voice acting is actually quite good for coming from such a small studio. The main character, Daniel Hanson has an excellent voice actor that is able to portray a gruff commander when needed and rarely sounds like he is reading from a script. On top of the quality voice acting, sound effects as a whole have improved; from the clinking and torch-like sound of your Chimera’s as they mine shards to the whirring of your air units and the rumble of your tanks. Each sound is clean, clear and has a nice depth to it without being static-y or full of pops. Some of the unit effects, specifically explosions all seem to sound the same and can be a bit repetitive since, well, things will certainly be exploding often. 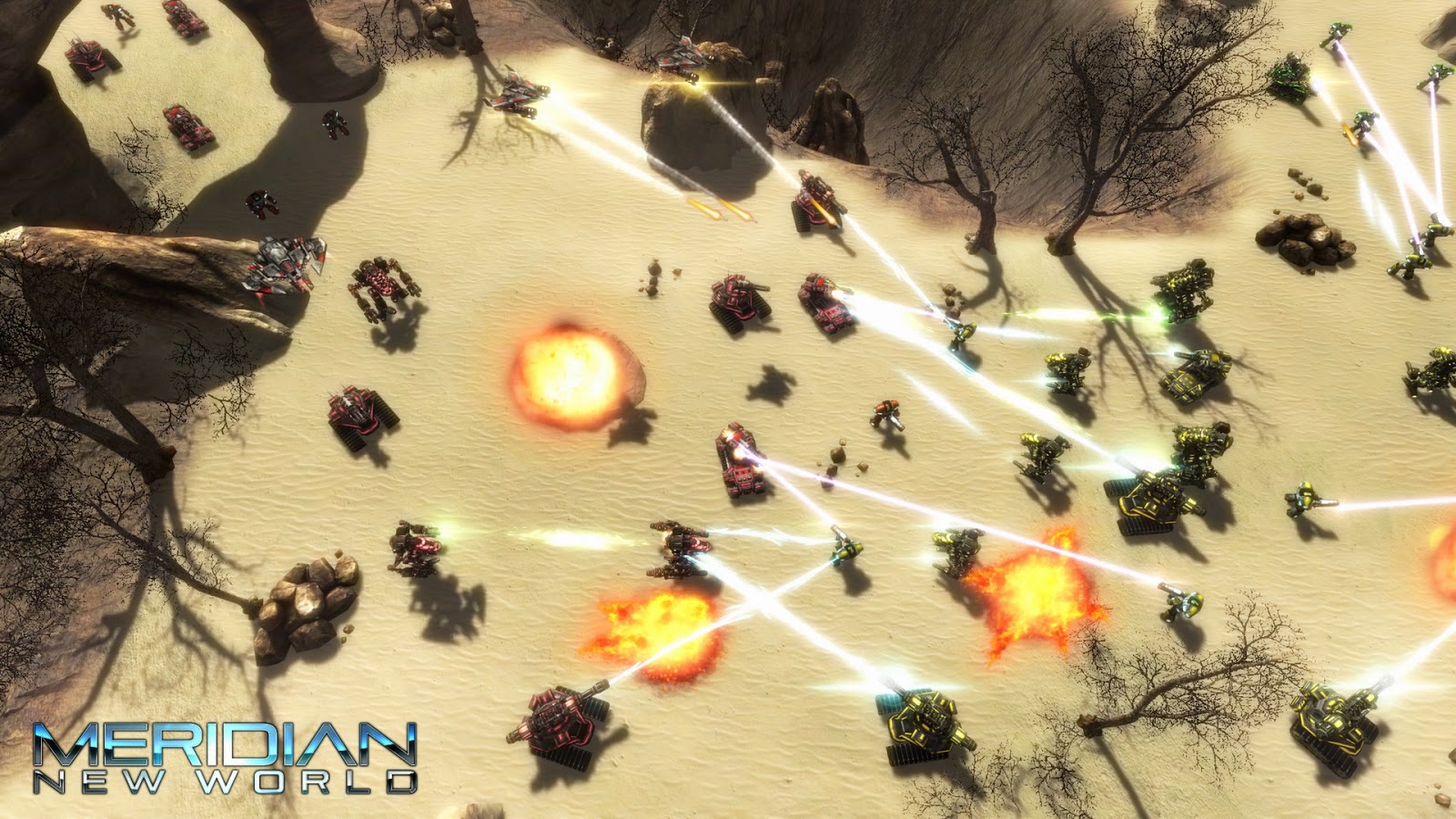 Overall much has not changed between the Early Access preview that I did and the fully released review, outside of the addition of new units, maps, and a host of bug fixes. Where Meridian: New World really shines is in the nostalgia factor; there are not many barebones RTS titles out there these days and Meridian is certainly one. Foregoing multiple to focus on a decent story and excellent single-player experience, Meridian: New World channels classic titles like StarCraft, Total Annihilation, and the Earth 21xx series so well that I would be hit with such nostalgic feelings that I took to GoG.com to find some of those older titles.

While it does not have the production values of something like Company of Heroes or StarCraft II, Meridian: New World is an impressive title with good intentions developed by a one-man studio. In a quest to develop a pure real-time strategy game, Elder Games certainly delivered a wonderful experience that will continue to grow as gamers take to the map and script editor to customize their gameplay.