I was first introduced to the “castle sim” genre of gameplay with Firefly Studio’s 2001 game, Stronghold. At the time the real-time strategy genre was all over the place; from fantasy based games like the Warcraft franchise to unique spins like Tzar: The Burden of the Crown, Earth 2150, Command & Conquer: Tiberian Sun. Fortunately it was a good thing, as some real gems came out of those days, Stronghold and Stronghold Crusader being a few of them. What was different about Stronghold and its sequel (-ish) was that it was a castle-building sim. You would gather resources, manage your town’s needs, and build your army, but the real ‘character’ was the castle. Each map allowed you to build your castle to your desires. 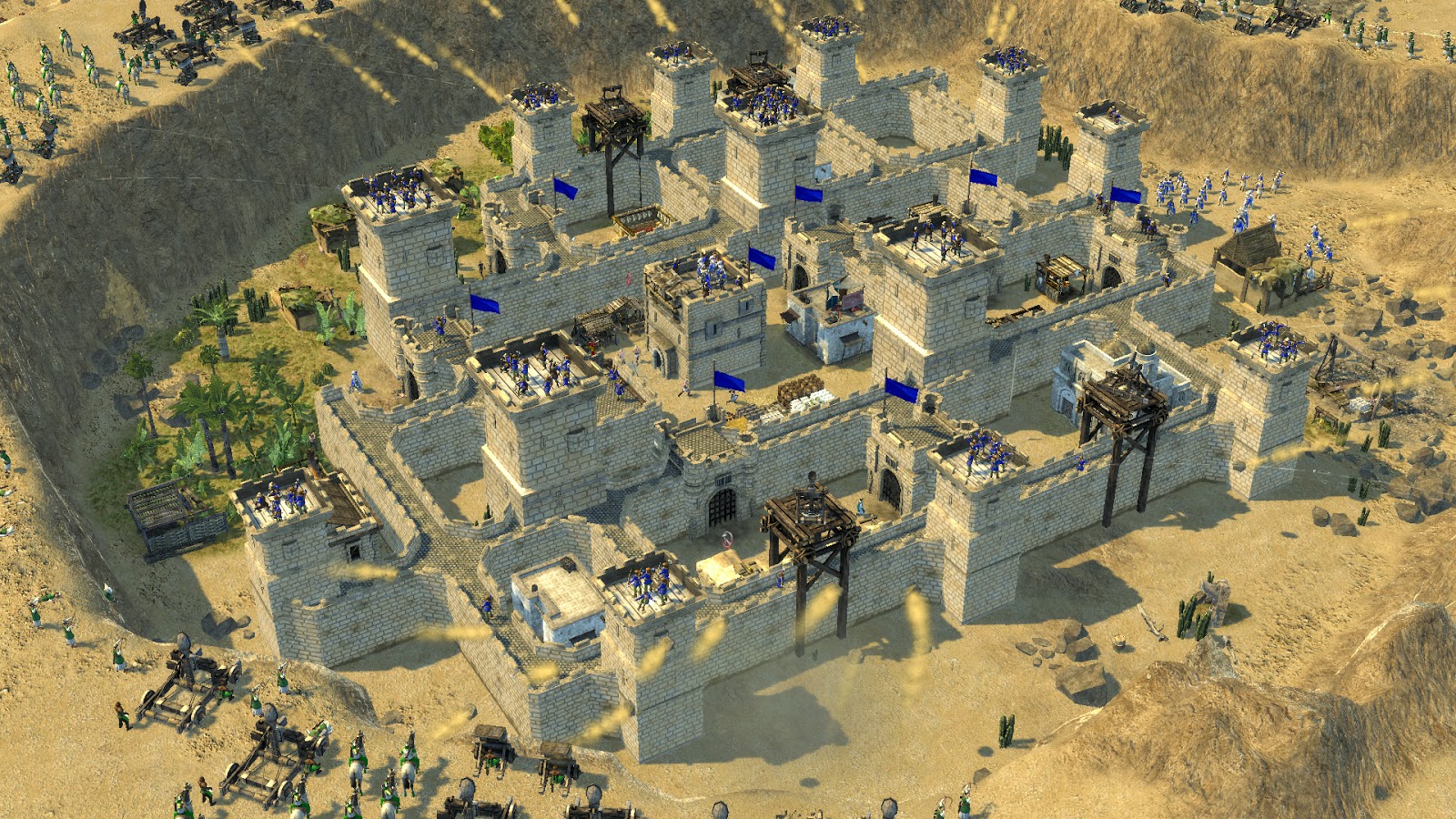 I would spend hours upon hours stalling and not moving forward with missions just so I could build a castle of epic proportions, full of tar pits, boiling oil pots, towers full of archers and creating all manner of wicked traps for enemy siege-teams. It was a blast and a very unique experience in a world full of Blizzard and Westwood Studio clones, Firefly Studios brought something unique and interesting to the table. Fast forward nearly fifteen years and Firefly Studios has now released the sequel to the stellar Stronghold Crusaders, Stronghold Crusaders 2. Was the ten plus year wait worth it? Read on to find out more.

Graphically a lot has not changed over the years, yes, there are higher resolutions and many more details in each and every item. For instance, ale barrels have individual slats and iron bandings, piles of quarried stone have varied textures, and each of the different farms and workshops have been meticulously detailed. What I mean by “has not changed” is that the instant you get in-game, you know you are playing a Stronghold game; the aesthetic, overall look and feel of every unit, building, or piece of shrubbery could be interchangeable with tilesets from ten years ago. Some of you may think that this is a bad thing, or that it may feel tired and reused, lazy even but it is not. It is more like slipping on a pair of comfortable moccasins or putting on that one well-worn pair of work gloves; for lack of a better term all I can think of when I ponder the design aesthetic is “comfort food.”

Gamers that are new to the series that may have played Age Of Empires II will feel pretty at home as well given the Stronghold line and the Age of Empires franchise both have a very similar environment and feel to them. The biggest complaint that I have is that placing walls can be challenging at times due to the games desire to auto-attach a portion of the wall where it “thinks” you want to place it; I found that I would have to build then remove then build again, which is terrible on the resources since building a section of wall costs 7 stone but when you have to tear it down you only get 3 stone in return. That is a ton of wasted stone. Character models are all period specific and have unique features or appearances which is a nice touch given the fact that there will be times when there will be hundreds of units on-screen at a time. 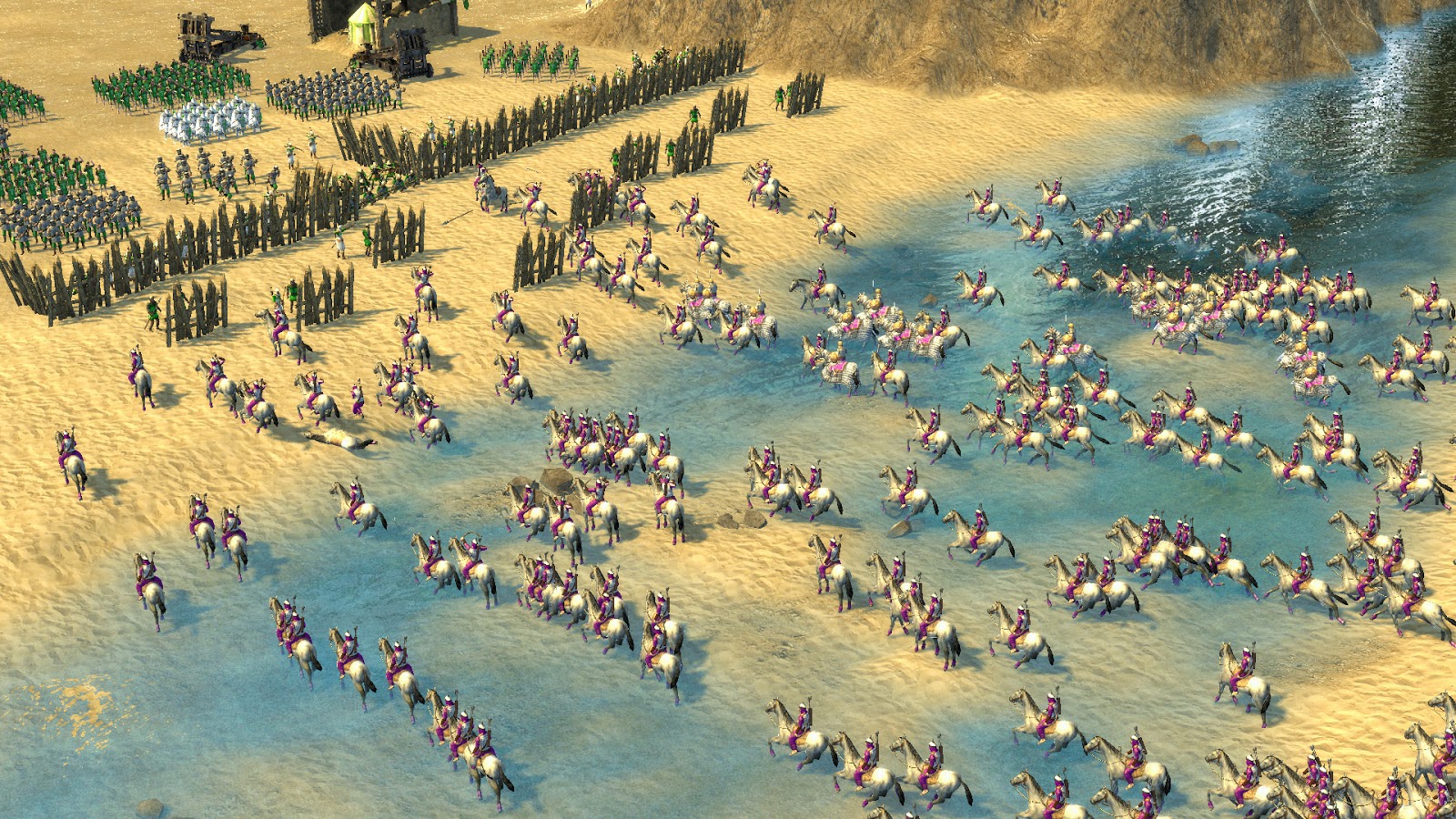 Audio is excellent in Stronghold Crusaders 2; veterans of the first games may recognize some of the voice actors as they make return appearances in the latest offering. Bringing the old actors back, in addition to the fact that your units will actually speak their native languages which helps one to feel immersed as a field commander. The real winner though is in combat; you see, battle can be small skirmishes with maybe a dozen units each having at one another. Me? I prefer the big ones so I will stall as long as I can in order to amass an army and the fun part is that the computer will do the same. When a few hundred knights, archers, pikemen, horse archers, and the like all get together and bash each other there will be noise.

A lot of noise. Fortunately Stronghold Crusader 2 does a phenomenal job of parsing out all of the audio without making is sound like a jumble of noise; individual reports from the narrator can still be clearly heard, as well as other more mundane sounds (birds? creaking wheels? lions? all check) which is a nice change of pace. There have been plenty of titles *cough cough* StarCraft II *cough cough* where important background audio is difficult to hear because of all the action on screen; not once did I have any of those issues in Stronghold Crusader 2 so I was able to watch my sieges unfold with glorious audio.

While graphics are solid and audio is rich, where Stronghold Crusader 2 really shines is in the gameplay. The ability to lay out and customize your own castle is fun all in its own right and allows those of us out there that are fascinated with castles to really build and interact with one. I can personally sink hours into simply building the castle, to heck with story lines, military units, or whatever; the castle-building is a blast. Like Lego’s with stone. I would like to see the ability to add moats as well as even expanding on your own keeps. Maybe adding the option for period-specific motte-and-bailey keeps could also help broaden the range as I felt that sometimes the castles tended to look too much alike. 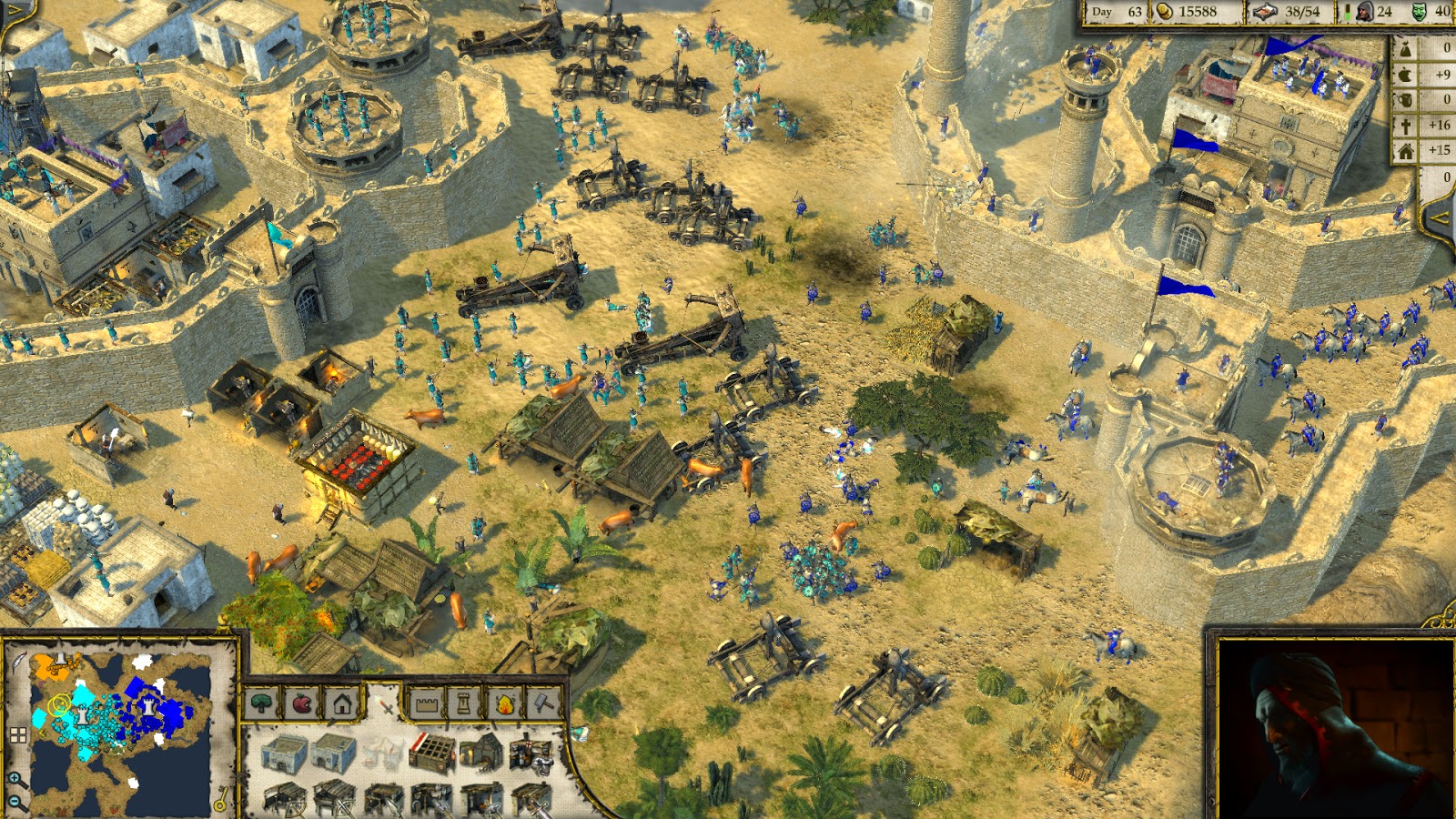 A handful of missions while fun, felt a lot like like the same mission as the last with just a slight deviation in the placement of tours. Where I had the most fun was in the skirmish modes; essentially just wave after wave of wall-fodder. Some of my games lasted for hours just because I enjoyed the need to build more walls and create more pitch traps. Overall the campaign, which is split into four or five small sub-campaigns of about five or six missions each, is more of a practice run designed to get you familiar with the mechanics of the game rather than being a deep story-based campaign. It serves its purpose well but beyond that it is fairly simple and straightforward.

While the last ten to twelve years have seen numerous re-releases of older Stronghold titles, the first true sequel that we have had in years, Stronghold Crusader 2 is a solid entry into a unique and much-loved franchise. Barring some oddities with frame rates that I experienced, the latest addition to the Stronghold family is technologically superior as it allows far more units on screen at any give time than any of its predecessors. On top of the optimization of the engine, the detailed graphics update while maintaining the same aesthetic lends itself well without feeling dated. In future updates or releases it would certainly be nice to see more options for the types of walls that are built and even the possibility of adding more keeps would be a great thing to see. Overall the action and real attraction to the Stronghold line lies within its fantastic skirmish mode and fans of the RTS genre or the castle/city-building genre will certainly enjoy Firefly Studio’s latest release.