I love space, it is, dare I say it, “the final frontier.” Imagination is a powerful process (or better yet, tool) and when tied together with an unknowable expanse like the inky black void that our little blue planet is floating around in, the possibilities are endless. Traveling, much less understanding the infinite blackness that surrounds The Milky Way is impossible, but a lucky few were able to set foot on Luna (the Roman name for the Moon); one of those men was Dr. Buzz Aldrin. In recent years, Dr. Aldrin has voiced or appeared in various television shows, movies, and video games such as The Big Bang Theory, Space Brothers, and Mass Effect 3 and now, has a video game, Buzz Aldrin’s Space Program Manager: Road to the Moon. 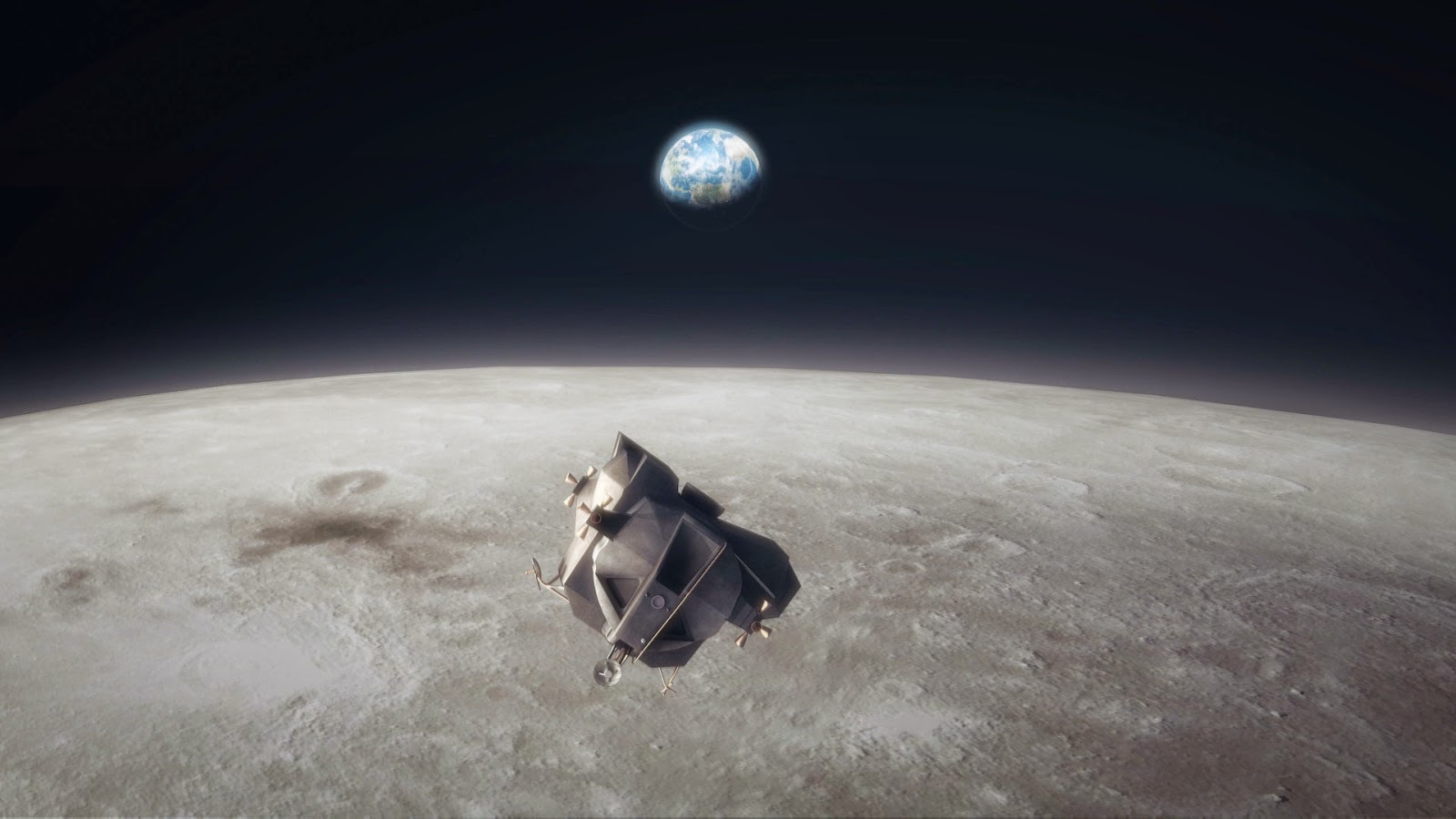 I mean, here is the Dr. Buzz Aldrin, consulting on a video game about space and my inner space junkie is freaking out. Released on October 31, Buzz Aldrin’s Space Program Manager is a blend of simulation, strategy, and management (what I somewhat ineffectually call “spreadsheeting”) where you are able to step into the shoes of the Director of either NASA or the Soviet Space Agency, or you can head up the fictional Global Space Agency. Featuring in-depth political moves, tight budgets, or sandbox-style play, Buzz Aldrin’s Space Program Manager is a trip back in time as two great nations (and one fictional one) begin their “race to the moon.” Read on for more information.

On a graphical level Buzz Aldrin’s Space Program Manager (SPM) is fairly simple and straightforward, though I did find that playing it at 4K resolutions caused the game to crash on a fairly regular basis, taking five or six times to just get the game to start a campaign. The game would crash periodically at random times with no rhyme or reason, though bumping the graphics down to 1920×1080 eliminated the issue almost completely. Even at 4K though, the game is decent looking, though, the via of your base is slightly better than, say, SimCity 4 but with higher resolution textures. This, though, is not really a bad thing since SPM is not a game that is focused on graphics, but rather strategy/simulation and resource management. 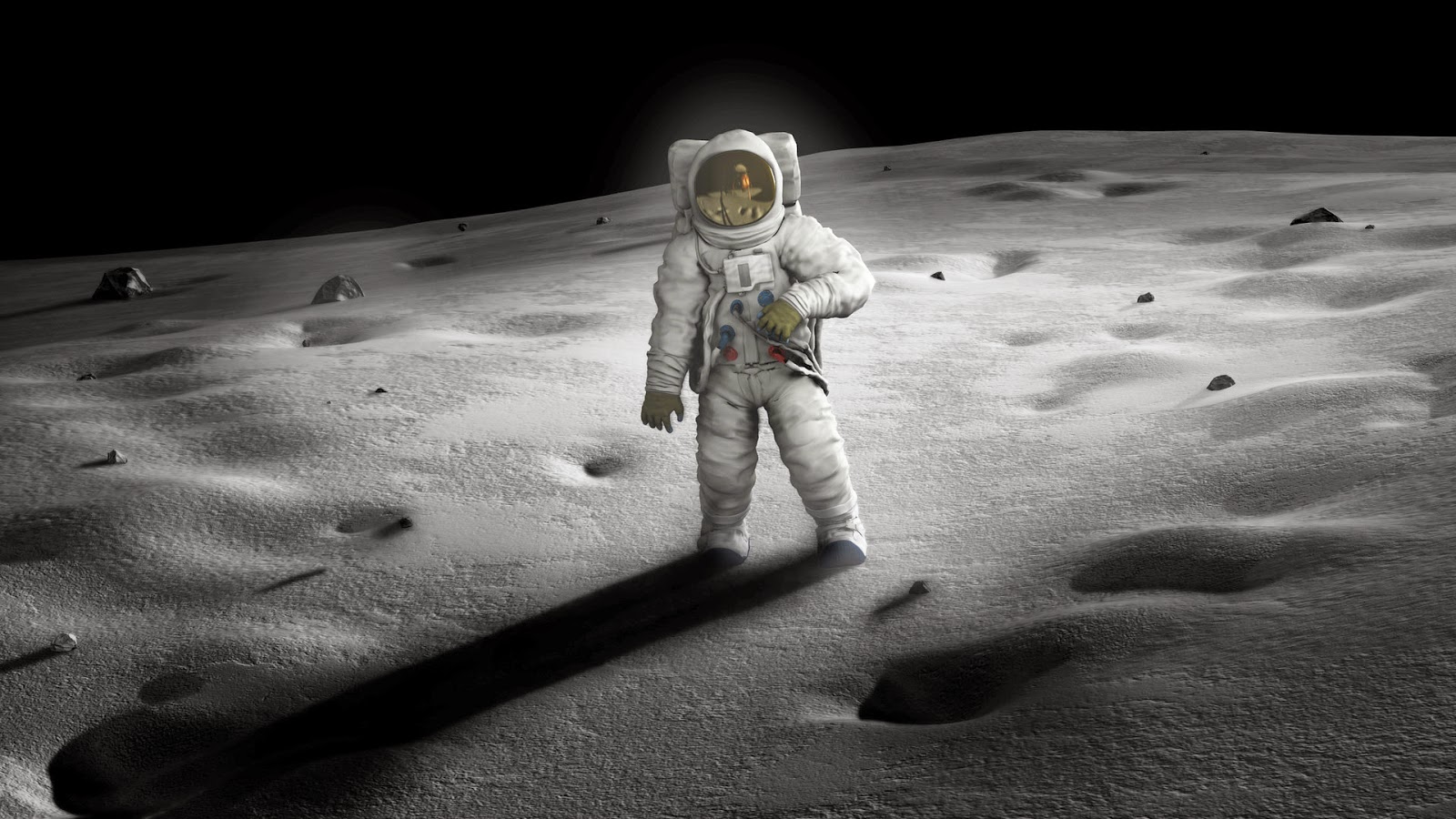 The “map” is very simple and static showing a day and night version with some fairly basic lighting and few shadows to try to give some depth to the complex; it works, but is very simple. Each base has a number of predefined areas that you will use to build specific buildings like the Vehicle Assembly Building or the Mission Control Center, which limits what you can do with the overall appearance of the base. This is not a terrible thing, but being able to reshape a base would be a nice little touch that could go a long way; again it is not the focus of SPM, but it would be welcome. Updates to your program and other happenings around the world are provide between seasons (a.k.a. turns) using simple graphics with information though I did get a bit of a whimsical feeling reading quotes from Dr. Wernher von Braun or President John F. Kennedy, which is a nice flair. Graphically though, Buzz Aldrin’s Space Program Manager would not be winning any awards anytime soon.

Where SPM should be winning awards is in the sheer amount of data and the way it is handled throughout your game. Menus are simple, easy to get to, and easily understandable which is very difficult for any form of resource management title. Incoming funding versus your expenditures is handled via the Public Affairs Office in a detailed review that will show where the money is coming in and where it is going out, which will help you manage the overall progress of your road to the moon. Once you have spent a few years game your Public Affairs Office will provide historical facts, giving something of a timeline for you to track your progress. In addition to the Public Affairs office you have other buildings (some needing to be built, taking a sizable chunk out of your initial budget) such as the Scientists, Engineers, and Technicians Center (SET Center) where you will train employees, the Vehicle Assembly Plant (the name explains itself), Mission Control Center (you will spend plenty of time here, hiring and managing your employees), and the Headquarters which is where you will open and manage your programs. 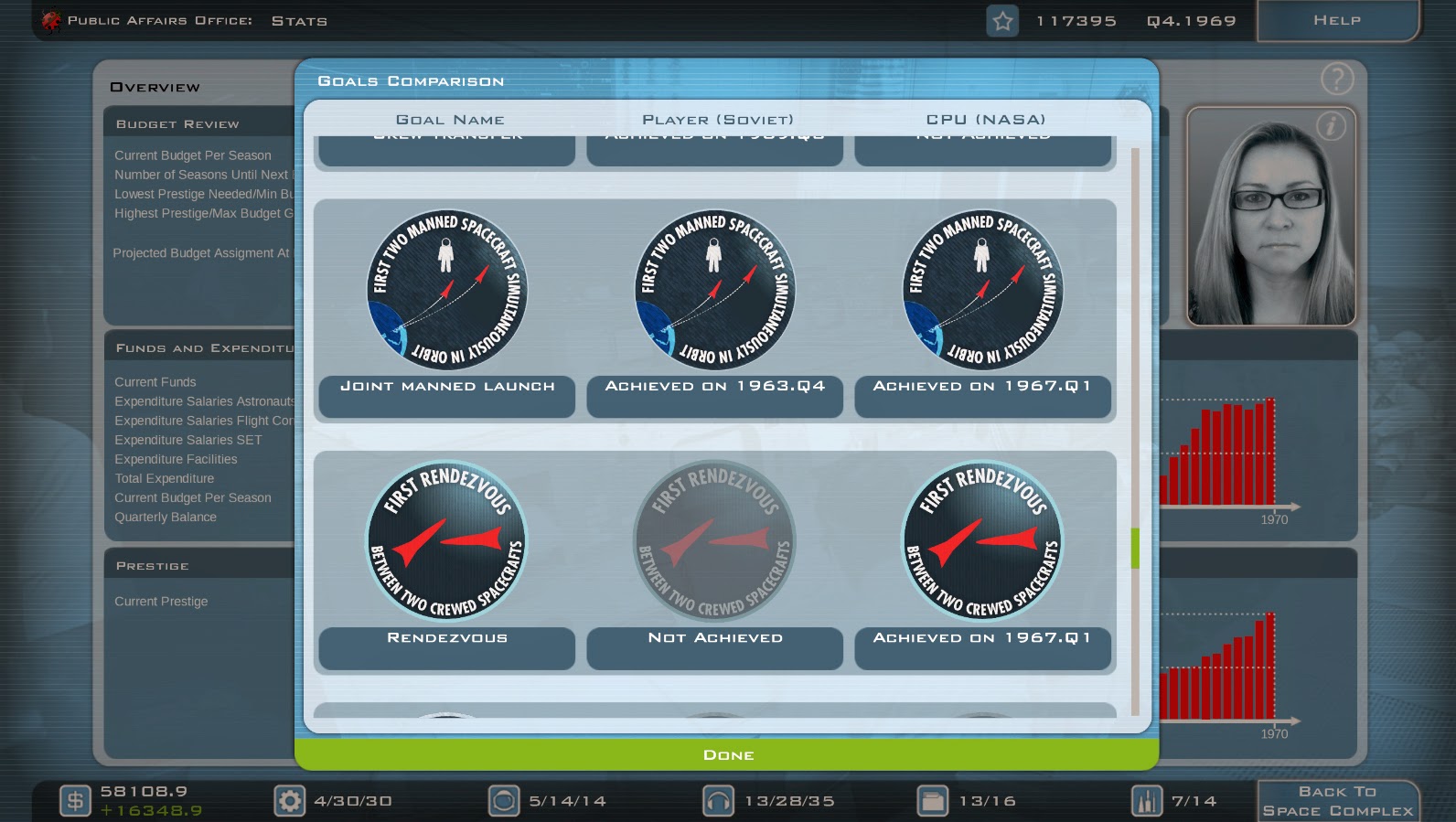 Each building has a number of different menus that open to more menus that will open to even more menus, however they are easily navigated via a nav-bar along the left-hand side of the monitor. The entirety of the game is spent buried in these menus as you reallocate employees, open and close programs, and work to get the upper hand against the Soviets (assuming you are the Director of NASA). The reallocation of resources and employees is done with a few simple clicks and once you have your “turn” set up, when you end the season your changes go into effect; the process is very similar to your typical Civilization games and any fan of simulation / strategy games will feel right at home in the menus.

I will be the first to admit I am terrible with money management; in strategy games I tend to spend big up front then work to even out the kinks as they come along. While it is not the best strategy, it actually fits in quite well with  SPM as I found that it was generally beneficial to spend big and ride the wave. Though there are times where pressure from the political arm of your respective nationality (i.e. the President of the United States) makes you want to kick yourself for some decisions, where you may find that it takes twice as long to go through and recover. When I reflect on it though, those difficult periods are what really bring out the skills, being able to go through and recuperate from a handful of poor decisions to swing back into the lead for the race to space.

I did spend a fair amount of time in Sandbox mode, though, which allows you to take the game at a significantly slower pace where you are not influenced by outside sources. I found that the more time I invested into the Sandbox mode that the campaigns became significantly easier as I was able to get a good feel for what Research & Development programs to aim for first. Taking those lessons and applying them to the campaign gives you a good roadmap and can almost guarantee victory. 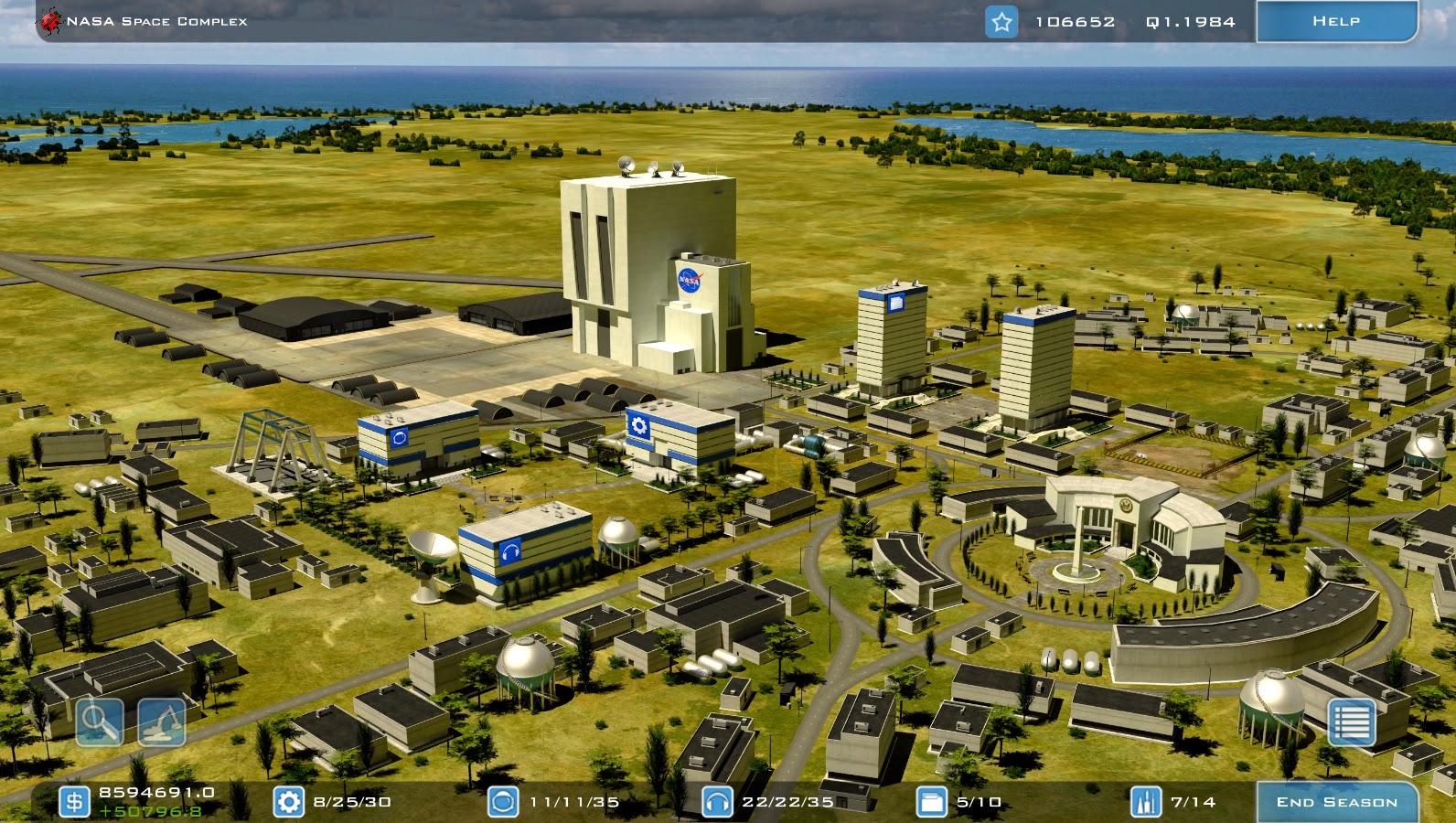 Buzz Aldrin’s Space Program Manager is an excellent resource management game with some light strategy elements, though I think that strategy is not the correct term. Above all, SPM will go through and tax your “spreadsheeting” skills while at the same time going through and taxing your ability to see three of four seasons ahead. The one aspect that really got to me, though, was the lack of an in-game tutorial.

With a title as in-depth and layered as Buzz Aldrin’s Space Program Manager, the lack of an in-game tutorial is crushing. There is a manual that is available and it is well written, but I had to resort back to it enough that I had to go through and open the manual on my second computer while playing in order to keep all of the checks and balances in place. While the different complexes serve their purpose, I think that it would have been a bit more interesting if the ‘map’ was designed along the same lines as the newsreels and updates that appear between seasons (turns). It is not a breaking feature though and overall the game is actually quite good, polished, and outside of the issues with 4k resolutions, quite bug free. With Buzz Aldrin’s Space Program Manager, simulation fans will actually find something new and refreshing and an excellent new take on space-related simulation titles.

9 Min Read
Manage Cookie Consent
To provide the best experiences, we use technologies like cookies to store and/or access device information. Consenting to these technologies will allow us to process data such as browsing behavior or unique IDs on this site. Not consenting or withdrawing consent, may adversely affect certain features and functions.
Manage options Manage services Manage vendors Read more about these purposes
Preferences
{title} {title} {title}